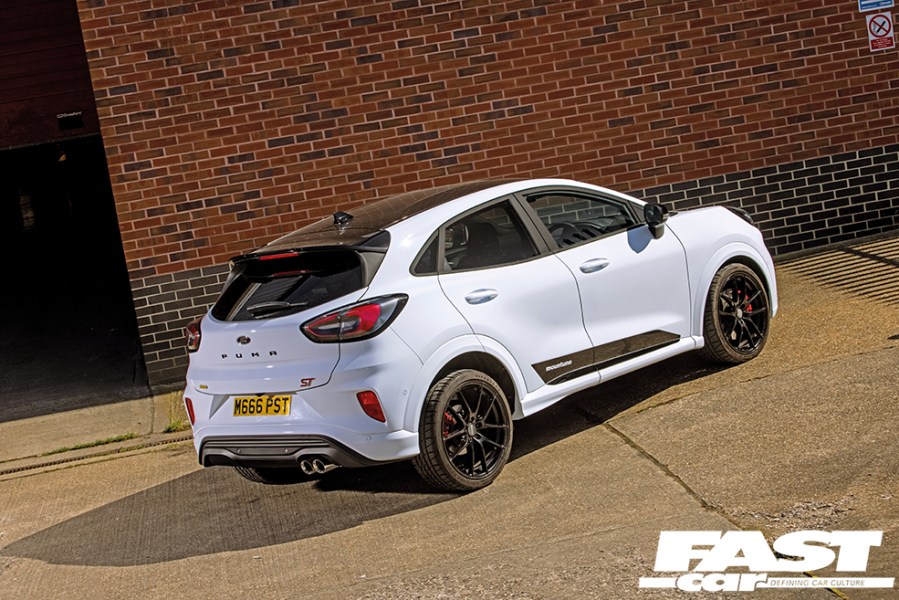 We jump behind the wheel of the Mountune Puma ST M235, before installing the M260 software and going out for another play.

Having already got to grips with the Mk8 Fiesta ST very early on, we knew it wouldn’t be long before Mountune started offering similar upgrades for the Fiesta-based Puma ST. And sure enough, as soon as the first deliveries began, a fresh Frozen White example rolled up outside Mountune’s HQ ready for some development work to begin.

With the Puma sharing much of its platform with the Mk8 Fiesta, Mountune could quickly get its tried-and-tested software working on the mini-SUV too. We’ve already driven the development Mk8 Fiesta ST with similar software installed (see Fast Ford’s May 2019 issue), but things don’t stand still long in the tuning game, and that (M225) upgrade has already been replaced by the slightly more powerful, updated M235 software (which Fast Ford also tested in the September 2020 issue). 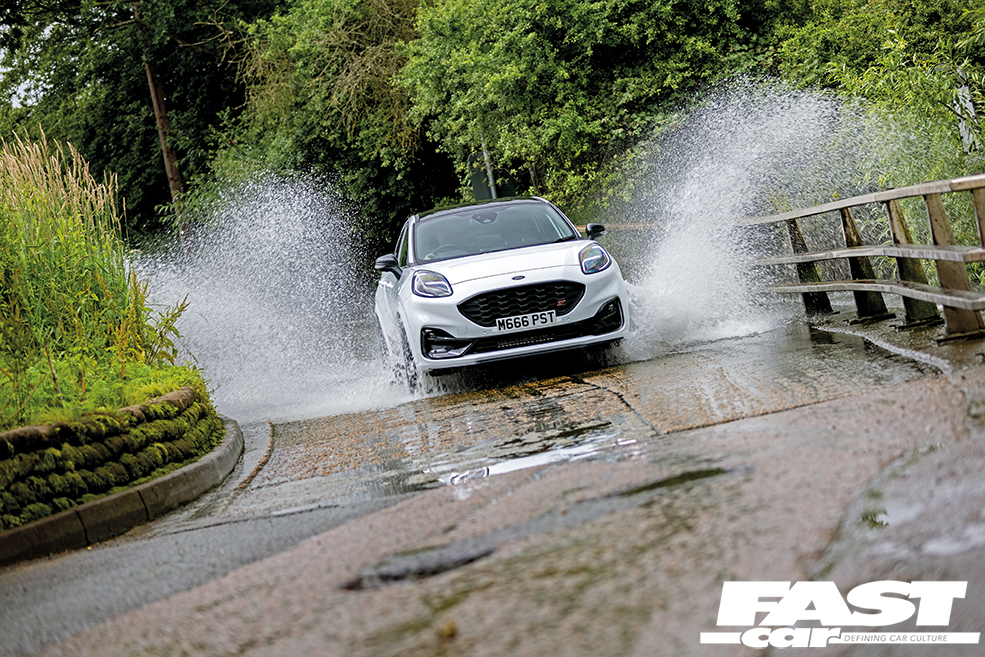 The M235 is what I was going to be testing in the Mountune Puma ST, but with Covid-delays and a hectic summer show schedule, it was a few weeks before we could set a date with Mountune. And believe us when we say things don’t stand still for long, because by the time we’d got a date in the diary, Mountune had released its next-level software upgrade, the M260. Bargain! Two for the price of one.

When we arrive in sunny Essex, the Mountune Puma ST is already loaded with the M235 map, so we take it out to see what improvements this first-stage upgrade offers.

I must admit, I quite like the Ford Puma ST; it offers real world practicality with a genuine sense of fun and proper performance. But it’s not without its flaws – the build-quality isn’t as good as the Fiesta, and the car squeaks and rattles after just a few-thousand miles.

Thankfully, the M235 software does a good job of waking-up the stock car, almost enough to take my mind off that annoying squeak behind my right ear. The M235 seems to sharpen the power delivery, and while there is a definite increase in power, it’s this extra urgency and willingness to get going that impresses the most. 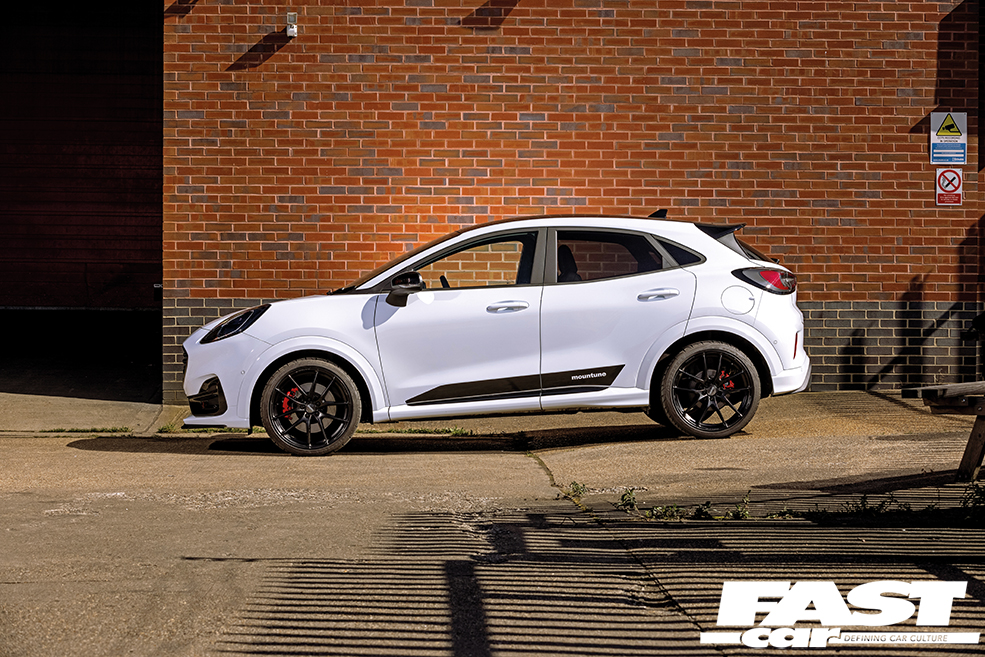 It works brilliantly out on the leafy Essex countryside roads, where the elevated driving position and excellent chassis combine with the snappier throttle response and increased power and torque to give the stock Puma ST and good ol’ poke up the backside. It’s a fantastic entry-level upgrade that doesn’t detract from any of the Puma’s everyday practicality – it all feels very OEM, and you can even use it on cheapo 95RON fuel if you want (although power output will obviously be less).

But we suspect most readers are more interested in what happens when you add hardware upgrades, fill it up with 99RON, and really begin to turn the wick up. And that’s exactly what the M260 software does.

To run the M260, Mountune recommends an induction kit, charge pipe upgrade and performance intercooler are fitted. If they are, the revised software will deliver up to 256bhp and 269lb.ft – and that is enough to make a big difference on the road.

With all the hardware already in place on this car, we find a safe spot to pull over, stick the SMARTflash adapter in the OBD port, and grab the iPad that Mountune has kindly left in the glovebox. Within a matter of minutes, we’ve switched over to the M260 software, and we’re ready to head out in search of some country lanes again.

Immediately, you can feel the M260 has more bite – even at part-throttle it sounds more aggressive, with more amplified whooshing and hissing coming from the intake and turbo compared to before.

And it certainly pops and bangs on the overrun when in Sport mode. To be fair, so does the M235-equipped car thanks to something Mountune engineers playfully refer to as ASMO – Anti-Social Mountune Overrun, but it does seem more aggressive with the M260 installed. 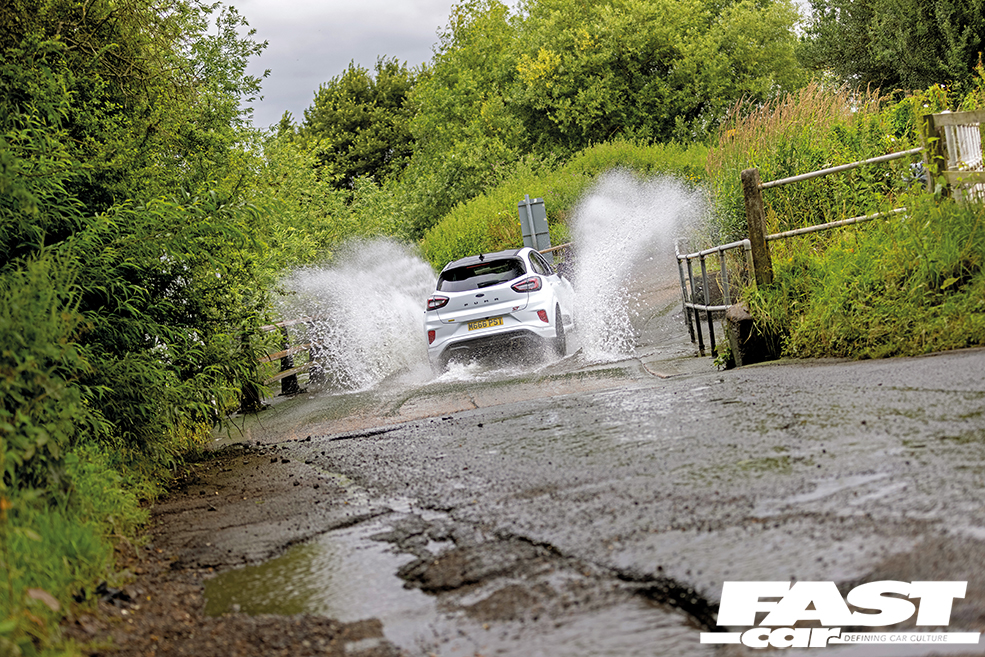 It’s addictive, a little bit childish, and makes you change your driving style so that you can chase the biggest and loudest bangs; foot flat to the floor, let the boost start to build, then a sudden lift off the throttle – ideally timed just as you go under a bridge or enter a tunnel.

Either way, it’s making me smile, and that’s what this Mountune-fettled Puma does so much more than the stock car can.

Another neat addition is the full-throttle shifting that Mountune has added as part of a Performance version of the calibration – you can choose between Performance or ASMO when uploading via the SMARTflash. In all honestly, just like the enhanced pops and bangs, it’s a bit of a gimmick that probably doesn’t make you any faster at all. But, like the extra overrun noise, it makes you feel faster and makes the whole driving experience more fun – and if we’re not setting lap times and chasing tenths of a second, surely that’s what driving fast Fords is all about? 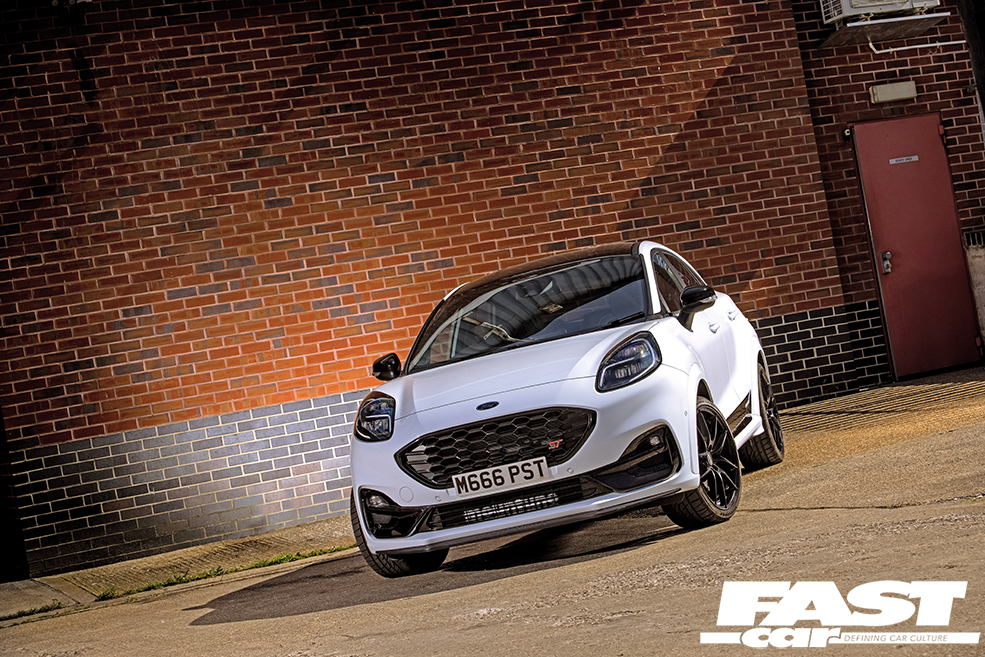 The extra power, which the Mountune Puma ST M260 seems to hold onto for longer than the M235, encourages you to press on that little bit harder, and that’s when the Puma’s chassis really comes alive. Maybe it’s me growing in confidence behind the wheel, maybe it’s the extra performance from the M260, or most likely it’s a combination of both, but now we’re starting to find the limits of the handling.

On the same roads earlier in the morning, the Puma was taking everything in its stride, but now as I attack those same corners more aggressively I can start to feel the ATB front diff working as it hunts for grip on the loose stone-chippings, and the rear end is starting to feel a lot twitchier at these speeds.

No doubt a set of slightly stiffer and lower springs will help improve stability, but the snappiness is one of the key ingredients that makes the Puma ST such a hoot to drive, so I wouldn’t want to dial it all out completely.

The Puma ST has divided the fast Ford community, but we need to acknowledge that times have changed and modern fast Fords have needed to adapt to keep up.

Is the Ford Puma ST ever going to have the kudos of a homologation-special limited-edition like the RS500? Of course not. 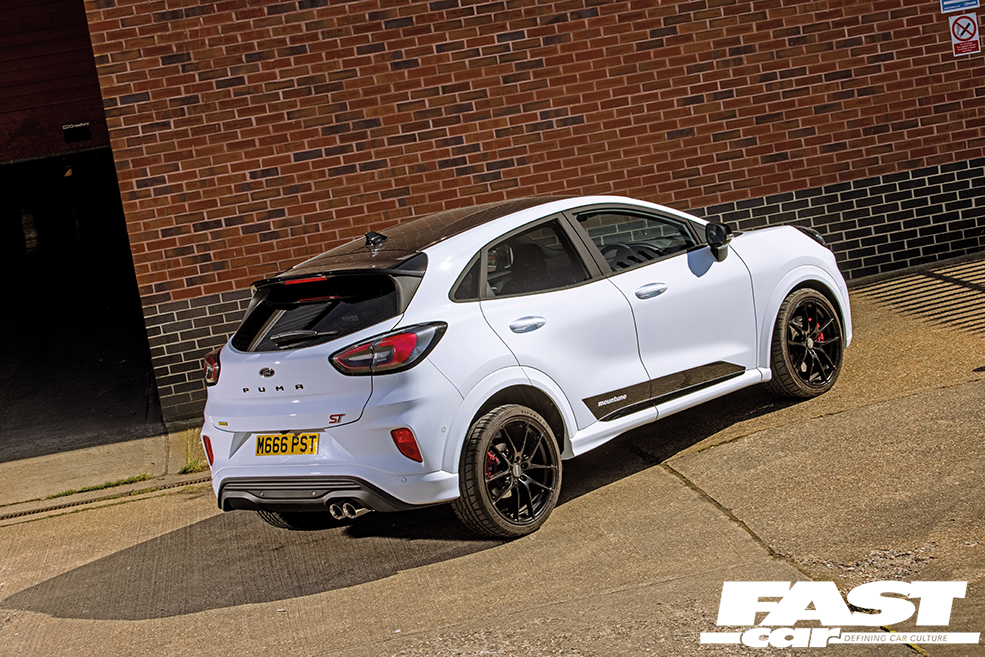 Am I suggesting you sell your Cossie showpiece or RS track car and replace it with a three-cylinder SUV? Not likely.

But is it a car worth considering as alternative to the ‘regular’ everyday car used for daily duties? Too right it is.

Think of it like that, and it starts to make a lot of sense. Mountune has hit the sweet spot for this genre; the M260 is affordable (at around £1600 for software with supporting hardware) because, while it utilises a handful of key hardware upgrades, it avoids prohibitively expensive components such as GPF filters and sports cats, yet it totally transforms the driving the experience of the stock car.

It’ll never replace your RS, but with the Mountune Puma ST M260 installed you might just find yourself choosing to take it out more often that you originally planned.