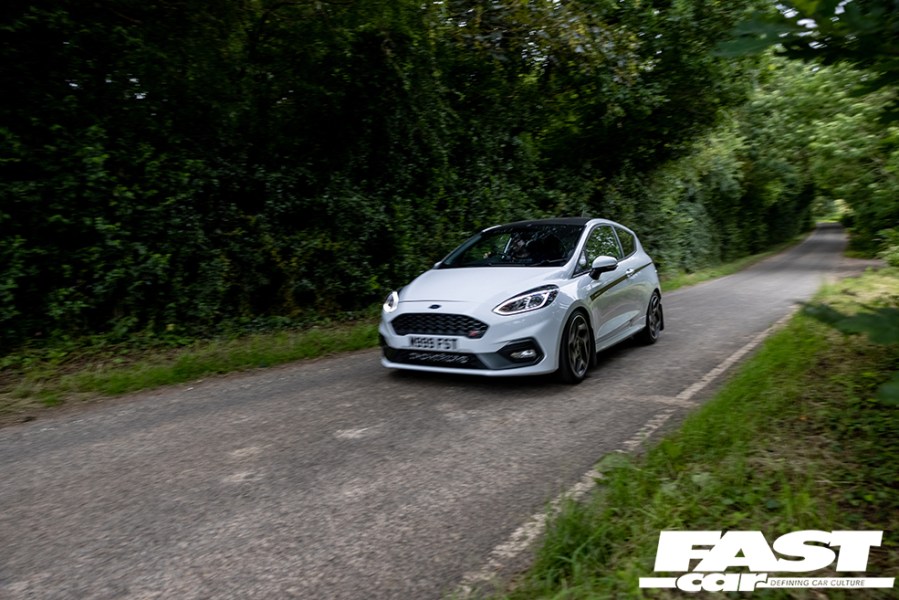 Building on its m235 upgrade for the Mk8 Fiesta ST, Mountune has upped the power with the m260 kit… And Jamie from Fast Ford has been driving it.

A couple of months ago I sampled Mountune’s m260 upgrade in the new Puma ST, but now I’m back to try out the same 254bhp tuning package in the Mountune Fiesta ST Mk8.

I’ve driven this car before, when it first arrived in m225 guise and then again with the revised m235 software back in September 2020. As with the Puma, the m235 software only really needs a better induction kit to deliver optimum performance, but the m260 takes things to the next level and as such requires some hardware improvements to the intercooler and pipework to work efficiently.

The development car I’m driving here also has a few other performance goodies bolted on: Mountune’s short-shift arm, roll restrictor, GPF-back exhaust system and lowering springs. As you can see from the photos, this car had a development brake kit at the time too, but the Mountune engineers are still working on that one…

When I last drove this car, many of those hardware upgrades were already in place (as Mountune was already busy working on the new software even way back then), so how does it compare now that it’s running the m260 software?

Well, before I get to that, let’s start with the similarities instead. Just like the m235, it’s very OEM-plus in its nature; it still feels very solid and dependable around town and in traffic, it’s quiet and comfortable for daily use (although the GPF-back exhaust does bring a welcome added bit of theatre to proceedings), and when you do get out on some twisty B-roads it still feels incredibly punchy between gears. It always amazes me how a small-capacity three-cylinder engine can feel so torquey, especially coming out of slower and tighter corners.

Of course, this car having the Quaife ATB diff as part of the optional Performance Pack certainly helps, but the linear and smooth power delivery is the key ingredient to the added get-up-and-go.

That’s all very much like the m235, so what does all the extra cash spent on hardware upgrades and the m260 give you?

Well, basically more of it. There’s undeniably a little extra urgency and the m260 punches its way out of those corners that little bit harder, but the biggest difference can be found after you exit the corner and keep the throttle pedal pinned.

With the hardware upgrades allowing the 1.5-litre EcoBoost to breathe more freely, the Mountune Fiesta ST m260 keeps getting better with revs. The boost builds nice and early, from around 2000rpm, and it just pulls and pulls all the way round to the rev limit. Doing so means you can rifle through the gears with addictive ease – helped by the 25 per cent reduction in throw offered up by the short-throw arm fitted to this car.

But, as with the m235, the fastest way to make progress is to shift up just before you hit 6000rpm; the power and torque both start to drop off after this. By nailing the shift points, the revs drop right back into that sweet spot where maximum torque is being delivered – 3000-to-5000rpm – and you can ride that wave of grunt all over again.

As with the Puma, there’s two versions of the m260 available to install: the Performance  and the ASMO (Anti-Social Mountune Overrun) calibrations. Once again, thanks to the iPad Mountune has left in the glovebox and the fancy SMARTflash system, it only takes a couple of minutes to switch between the two.

The Performance calibration allows flat-shifting, which is something I’ve become accustomed to in my own Mountune-tuned Focus RS, but I confess I enjoyed my time with the ASMO calibration installed just for the sheer giggle factor.

The Performance version certainly doesn’t mute the pops and bangs, but Mountune says these are optimised levels. I suspect that means just enough to stay on the right side of offensive, and not enough to get you kicked off a track day for tripping the noise meters.

But the ASMO calibration is a full-on onslaught of snaps and crackles every time you lift off the throttle. Amplified through the GPF-back exhaust on this car, it sounds more like an assault rifle being fired into the air in the centre of Kabul than a little Fiesta driving through the leafy Essex countryside.

As much fun as the ASMO version is, if I owned one, I think I’d run the Performance calibration. The excessive pops and bangs are great to have, but I worry I’d tire of them all the time… Plus the flat-shift works so well with that wave of torque that I’d take it over a lairy soundtrack every time.

And that brings me back to what I love most about the m260 ST – it’s a proper little performance car. Yes, it’s comfortable and compliant enough for daily use (as you’d expect it to be) but I can only imagine it will hold its own on track too.

I’d love to take this car around somewhere like Cadwell Park or Blyton Park because, if the Essex countryside is anything to go by, it’s sure to be a real weapon that would surprise plenty of more powerful and more exotic-sounding machines.

The Mountune SMARTflash system, including m235 and m260 calibrations, costs £675. Of course, you’ll need the hardware upgrades too, but given the fact you’re reading this magazine I suspect many of you will already be running performance intakes and intercoolers anyway.

If not, the full kit of Mountune hardware upgrades required to run the m260 will set you back about £1000, but we’d recommend adding the exhaust at another £700 too if you can stretch to it. That might sound like a lot, but for the difference it makes and the for the sheer fun factor it brings, it really isn’t. Plus, if you could have added this lot to the options sheet for an extra £2400 when you ordered the car from your dealer, you already would have done so.

The Mk8 Fiesta ST platform will undoubtedly have more to give, but the m260 could very well be the perfect blend between price, performance and practicality.