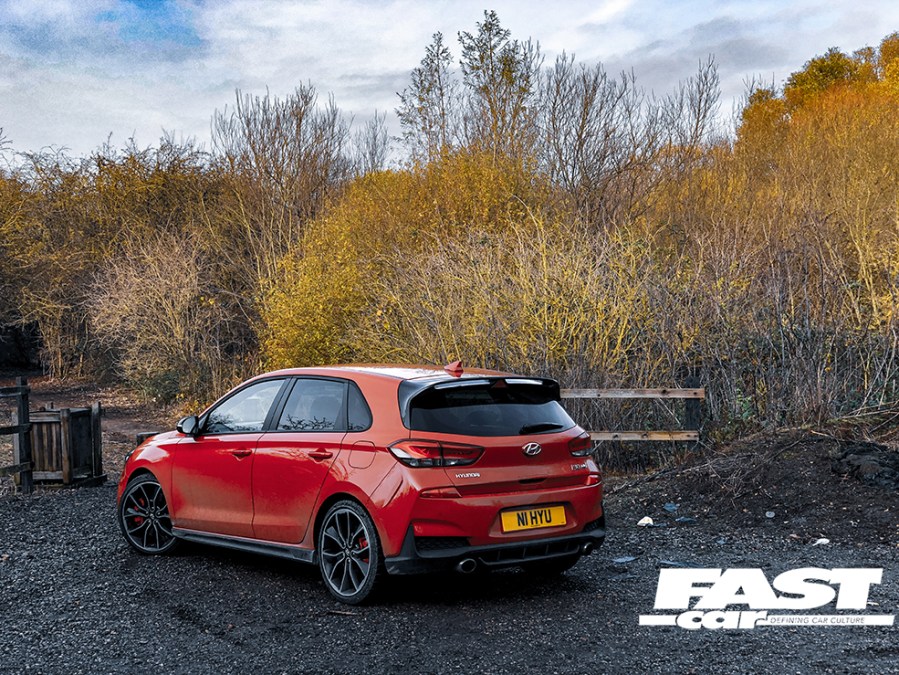 The i30N is Hyundai’s first attempt in the hot-hatch sector, but you’d think it’d been the kingpin for the last 20 years…

As far as Hyundai and hot-hatches go, the two couldn’t be further apart. Usually associated with cheap runabouts for the masses, the decision to introduce an N division to enter into a performance sector seemed like a stupid one. But once you learn that Albert Biermann, the man that headed up BMW’s M division for so many years (clearly liked single letter “divisions”) was leading the programme, suddenly you start to think, wait, this might be good.

I’ve been unlucky enough not to get a drive in the i30N for the last two years, so this review isn’t new. So what could you possibly read here that you wouldn’t have read already? Urm. Not a great way to start a road test… What I’m going to tell you is that this is all the car you ever need. That’s a bold statement.

First up. This is a good-looking car. It’s ticked the boxes that describe appealing to all, it’s not in-your-face, but it’s not so nondescript that your nan would own one. It falls somewhere in the middle that just seems to work with all ages. The dual exhaust, deep spoiler and larger wheels add in those subtle changes over the regular i30 that do enough to differentiate it from the boring cars. But the hatchback isn’t all fins and sharp edges like the FK8 that has people questioning whether the sat-nav said turn left down aisle 10 of the Halfords shop.

Next up, the interior. I played a game with some colleagues (I’m sad like that) and asked them to hop inside the car, without looking what it is, and try and work out what car they were sat in. Obviously I covered the Hyundai badges and giveaways, I’m sad but not stupid… “This is a Golf”, “it’s definitely German”, “I have no idea but it feels lovely, it’s finished nicely, feels premium but there are some plastics about so I guess it’s not a really expensive model either.” The latter being from someone a bit more experience than myself…

Now all that sounds silly, but when you’re entering into such a competitive sector, these are the things that define whether it’s a good car or not, and crucially, whether people actually want to buy one. Hyundai has done a marvellous job of making this car feel like a nice place to be. While some may argue it’s far too Germanic, personally I like some of the styling of the Lexus’s that have a sort of Manga-style look about them, Hyundai hasn’t tried to reinvent the wheel. It’s gone with what’s proven to work. Touchscreen in the centre, nice dials, not too much plastic, soft-touch material, and a chunky steering wheel that distracts you from the rest of the cabin that isn’t so nice.

The seats are also spot on. Alcantara/suede centres with leather bolsters balances sportiness with luxury and it’s done a good job in doing so. The central infotainment screen is a tad small compared to others in the same sector, but the presence of physical buttons as well as touchscreen capability is welcomed.

Biermann has clearly taken ideas from the M cars with the steering wheel. Not only is it chunky and feel-some, but check out those blue buttons, the one’s that look similar to the “M1” and “M2” buttons in the M cars. One side operates the drive modes where you can select between Eco, Normal, Sport, N mode and N custom, while the chequered flag simply chooses N mode or N custom.

N custom is configurable via the infotainment system, once you press the button it gives you the option on the screen to adjust the settings. It’s rare to see such choice as well, reminiscent almost of the older GT-Rs in its animation and displays. So, here goes. You can adjust the engine settings for throttle response, suspension, differential, rev matching, exhaust sound, steering and stability control. N mode puts all of these in the most aggressive setting, however, tip, day-to-day driving, have everything in the top settings bar the suspension, which I had in normal. It’s far less jiggly and crashy and offers a comfy, but still composed, ride. I never found a scenario where the aggressive damping was needed, perhaps that would have become more apparent on a circuit. Exhaust sound in sport + is a must if you want healthy bangs off the throttle above 3krpm…

This car is far better at doing the sensible boring drive and b-road blast than many in the hot-hatch sector. The i30N can genuinely tone itself down and be ordinary, comfy and what we’d normally call “boring”. That’s a very good thing from a new car. Most people buying this won’t want to modify it and will most likely be using it as a daily driver; having the option to tone it down to one and just get from A to B is beneficial. But we’re not here to talk about that. We’re here to talk about the other bit, the fun bit.

First up, this car came equipped with heated seats and steering wheel, and seeing it was the middle of November when this car arrived, that was a must. Now select N Custom, select first and away you go. Traction isn’t the best in these wintery conditions, even with the system completely on. It seems that another M trait has been carried over in the sense that the TC system isn’t so intrusive that it annoys you, instead it works with you, allowing for slip, but not so much that you don’t move from a set of lights.

The actual shifting points on the i30N are lovely, it has a strong feel to the lever for confident shifts. The steering wakes up a bit in sport, adding some weight to it, albeit with limited feel. But I like heavier steering, it makes you feel like you’re working for something. The engine is strong. The 2.0-litre turbocharged unit produces 271bhp and 260lb ft of torque in the performance trim (250bhp and 260lb ft in regular N – yes, same torque) sounds great through the rev-range and pulls strong to almost the redline. It does drop off towards the last 500rpm and it does discourage you from limiter bashing it, something the Honda entices you to do. The shift lights are a neat touch and come alive with around 1500rpm to go.

This is a quick car, make no qualms about it. It may look like a regular hatch, but even its straight-line performance is a marvel. It’s not as quick as a Civic Type R, nor a Golf R or some of the others in the range, but it pulls plenty strong enough to give the driver of an FK8 something to think about. What this car does really well though is the way it corners. You feel this inherent balance throughout the car, it’s predictable, but in a good way. You know what it’s next move is going to be, it’s so so easy to drive quickly, and when you’re in the mood for it, it’s a right hoot. Front end grip is brilliant from the electronic limited slip diff, you can feel it pulling you into a corner. You can be silly with the throttle, too, and induce the smallest hint of understeer, before the system work their magic to bring you back in line.

If you really want you can turn all the systems off and provoke a load of lift-off oversteer like you’re Thierry Neuville. It responds quite nicely to some light sliding, and like any FWD car, it’s ever-so-easy to bring it back in line.

The brakes are strong, too. It’s an area where I thought it would fall behind compared to its rivals given it’s fairly heavy at almost 1500kg. But that extra weight hasn’t affected it’s braking performance and has actually added to its overall composure and feel, not discouraging too much from its agility. Speaking of which, body rigidity feels strong. There’s even a strut brace running from side to side in the boot, which is kind of cool to show off to people, albeit very geeky. “OOO, look at my strut brace in my boot.”

Look, this isn’t as fast as an FK8, nor is it as sharp or rewarding. Nor is this as revered or suave as the Golf, nor does it sound as good as an M140i. What this car is, is good in all of those worlds. What do I mean by that? To put it simply, it does the performance bit, well, it sounds great and it’s a lovely place to sit. While it’s slightly compromised everywhere, it’s far more balanced across the board than any of those hatches I’ve mentioned. If it was ranked in those categories, it would probably sit around the second place mark across the board, making it my overall winner. It’s the car I’d choose to buy if it was my money, and that’s high praise from the road test editor of a Japanese performance magazine, gulp.

It’s the smart man’s choice, it also happens to be the most affordable and probably the least common on the road. Everywhere you look there’s a bloody M140i! So be different, embrace Hyundai’s rallying influence and back the new-comer. For a first attempt, it’s a bloody good one. I personally can’t wait for the machines it will be producing in years to come.

Easy one this, we’ve already partnered up with The Performance Company for your quick and easy guide to modifying an i30N. Check it out!