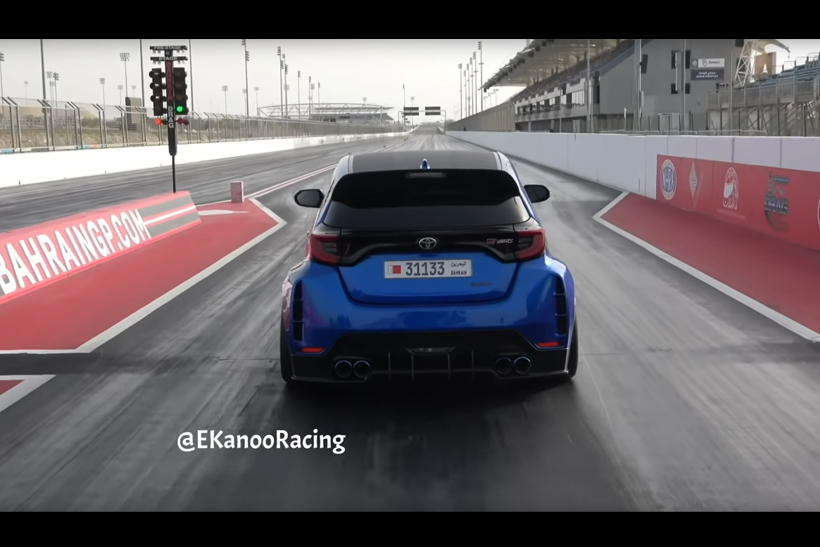 Watch EKanooRacing’s 519whp GR Yaris complete the quarter mile in just 10.98 seconds at 124mph in what is thought to be a world record.

To achieve a 10 second quarter mile and extract 519whp from a tiny 1.6-litre three-cylinder turbocharged engine is no small feat. While the details on all the GR Yaris tech specs aren’t mentioned, we’re led to believe that this has been achieved on the stock engine, and is not a fully forged motor. What we do know is that EKanooRacing, who is famous for building mental motors (and dynoing that Lexus LFA), is using a custom single turbo from Pure Turbo, mated to a new exhaust system, intake, intercooler and other cooling equipment, and brought together by a MoTec M150 ECU to help tailor the performance. The record run was completed at Bahrain International Circuit’s drag strip on road tyres.

The result is a 519whp GR Yaris that can complete the quater mile in 10.98 seconds at a collossal 124mph. In other words, it’ll be competing with a Lamborghini Huracan across the quater mile. Along the way, the GR Yaris hit 0-62mph in just 3.32 seconds, going on to complete the 62-124mph bracket in 6.9 seconds

EKanooRacing is also claiming that this is the first three-cylinder engined car of any kind to complete the distance in under 11 seconds, making it the fastest to do so.

You can watch the Toyota GR Yaris full dyno run below: