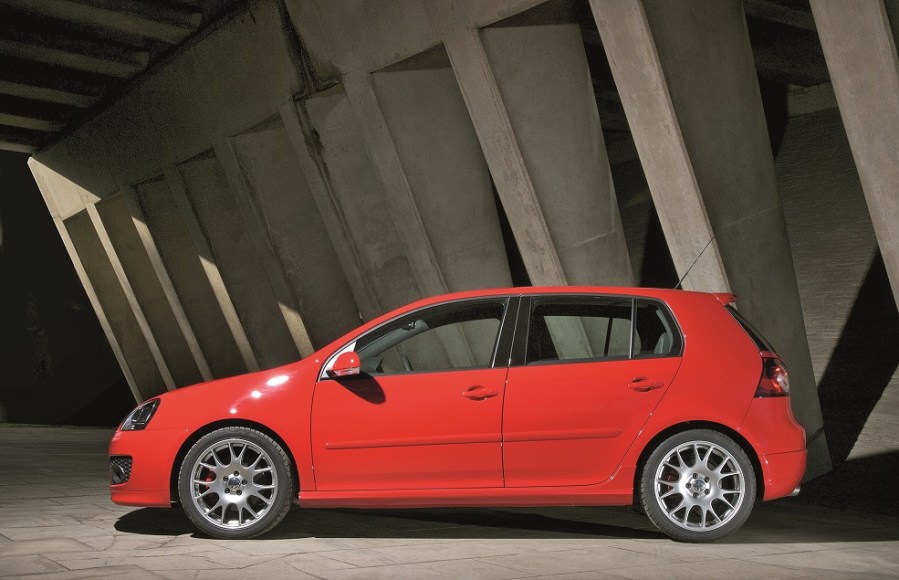 45 years ago, the VW Golf GTI appeared and immediately took the motoring world by storm, and if you’re looking for the sweet spot as far as used buys are concerned, we reckon it’s the Mk5 that hits the perfect balance of price and performance. Our buying and tuning guide will ensure you find the perfect example and are equipped with the knowledge needed to get it just to your liking, too. Sponsored by Adrian Flux.

The Volkswagen Golf is such an everyday sight in 2021 that it’s hard to imagine a society without it. But 1974 was a very different place to the world of today, and the launch of the Golf was a staggering departure from what people thought they knew about the Volkswagen brand; replacing the air-cooled, rear-engined, rear-wheel-drive Beetle with a crisply angular hatchback that featured a front-mounted, water-cooled engine and front-wheel-drive was a frankly astounding manoeuvre. And when the GTI concept was announced at the 1975 Frankfurt Motor Show, all bets were off. This was a new era of performance city cars.

Brilliantly, the secret ‘Sport Golf’ started as a skunkworks project among the engineers; presenting it to top brass in 1975, the idea was met with widespread approval and the Golf GTI came to market for 1976: fatter wheels, bigger brakes, aero add-ons, a close-ratio gearbox and a peppery engine made it an instant classic. In the early ’80s, the engine got bigger and the power increased, and the legend was assured. Golf GTIs are still massive sellers today, and that little pocket rocket was the magnificent genesis. 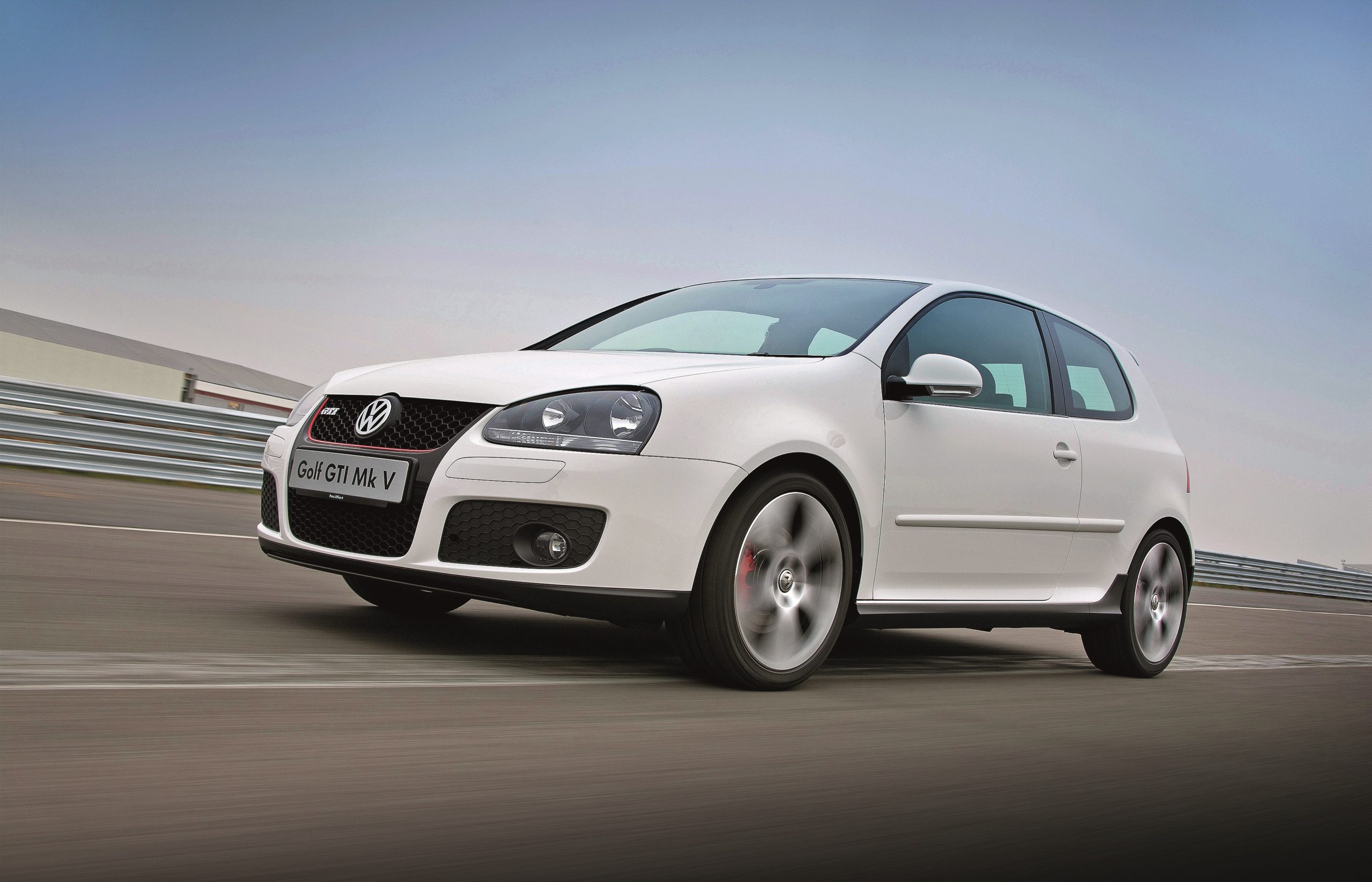 It’s fair to say that the trajectory of the GTI has been somewhat bumpy, however. The Mk3 certainly has its detractors, as does the Mk4; the Mk5 GTI of 2005 was widely celebrated as a return to form after a period in the doldrums, and we can view it as the progenitor of the third wave of Golf GTIs that endures to this day. The Mk1 and Mk2 are bracketed together as bona fide classics, the Mk3 and Mk4 are perhaps an acquired taste, and everything from the Mk5 to the current Mk8 is the wave of the future (or, at least, present).

With a turbocharged 2.0-litre engine serving up 200hp, the Mk5’s performance was right where it needed to be, and this impressive motor was offered either with a slick six-speed manual or a whip-crack DSG twin-clutch auto. A 0-62mph time around seven seconds assured its straight-line credentials, and it was a proper hoot in the twisties too; extensive chassis development resulted in a MacPherson strut front and multi-link rear. The interior was something special as well, with the Interlagos tartan seat trim and dimpled golf-ball gear knob harking nostalgically back to the iconic Mk1.

Unsurprisingly, the VW Golf GTI Mk5 sold like hotcakes, and the used market is positively brimming with them today. There are two formats available: the three-door is for the purists, while the five-door was an ingenious move to package all of these everyday thrills up as a practical family car. And there are also some limited-run specials to be aware of. The 30th Anniversary Edition (generally referred to as ‘Edition 30’) arrived in 2007 – the fastest production Golf GTI to date, its engine was tweaked up to 230hp, knocking about half-a-second off the 0-62mph time. The Edition 30 is distinguishable by its unique chin spoiler, body-colour side skirts and rear bumper, 18” Pescara wheels and redesigned seats. The GTI Pirelli was another special, launched in 2008, paying homage to the original GTI Pirelli of 1983. This new version sported bespoke Pirelli-branded 18” wheels (and Pirelli P Zero tyres, of course) along with the Edition 30-spec engine. The whole body kit was painted body colour, and the seats featured microfibre trim inserts with a tyre tread pattern. 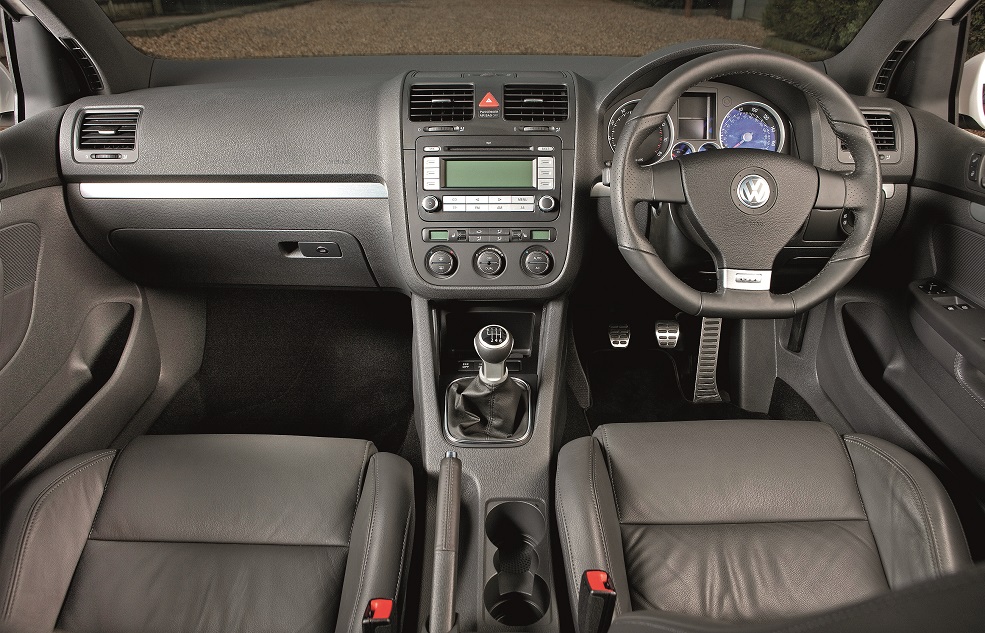 There was a time when our go-to choice would have been the Edition 30. After all, it’s essentially the ultimate factory spec for a VW Golf GTI Mk5, and owners are so enamoured of these cars that they’ve started to enjoy an almost cult-like following among ‘lesser’ GTIs. However, it’s this growing collectability that would perhaps steer us away from an Edition 30 these days – given that the Mk5 platform is so receptive to performance modifications, we’d be wanting to change a few things, and sullying the purity of a collectable seems a bit extra. So we’d be tempted to find a decent, all-original example of an early GTI, ideally a 2005 three-door in Tornado Red with the Monza wheels, and use that as a base for a fun project. 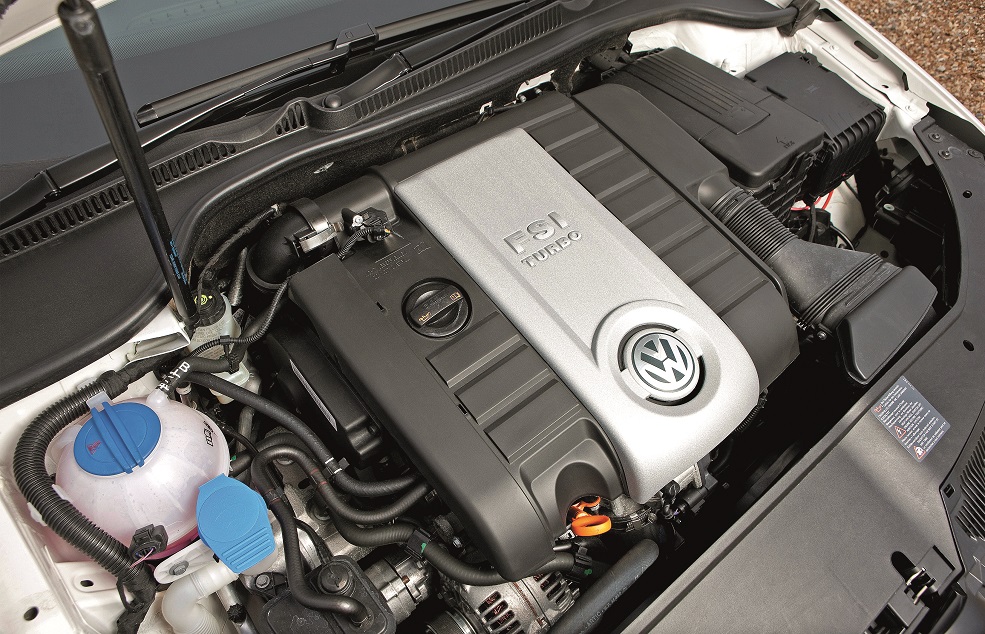 What to look for on a VW Golf GTI Mk5

History is crucial when you’re looking at a GTI. These high-performance machines have now passed into the price point where they can be picked up relatively cheaply by the sort of people who aren’t all that bothered about proper maintenance – so for peace of mind, you’ll be wanting to find a car with a nice thick file of paperwork and a fully stamped service book. Most important to check is that it’s had its timing belt changed at the proper time: there’s a bit of muddy thinking here, as the service-book interval is stated as every 120,000 miles, while dealers recommend doing it every four years or 60-80,000 miles… we’d recommend erring on the side of caution (because after all, timing belt failure could destroy the engine), and if it hasn’t been done recently, put it at the top of the to-do list. It’s a relatively pricey job – as it involves removing the downpipe to get access, and you might as well fit a new water pump and thermostat at the same time – but much cheaper than a new engine.

The engine itself is extremely robust, but you may notice one or two noises: the rubber diaphragm on the diverter valve can split, and you’ll hear a boost leak (this will most likely trigger a warning light on the dash too), while a rattle on start-up that disappears and reappears will most likely be a failing fuel pump. Coil packs are known to fail, but this is easily remedied; a misfire will be the tell-tale.

If a manual-equipped Golf has a heavy clutch, it’ll be due for replacement – in normal operation it should be nice and light. With DSG cars, make sure that the transmission has been serviced correctly, as a neglected unit will be jerky and sluggish. Check for uneven tyre wear – it’s usually caused simply by poor alignment so it’s nothing to worry about, but it’s a good bargaining chip. And be wary of shabby interior fit-and-finish, or uneven panel gaps and mismatched paint; the interior and body are very well put together, so anything notably amiss here is a sign of neglect and/or accident damage. 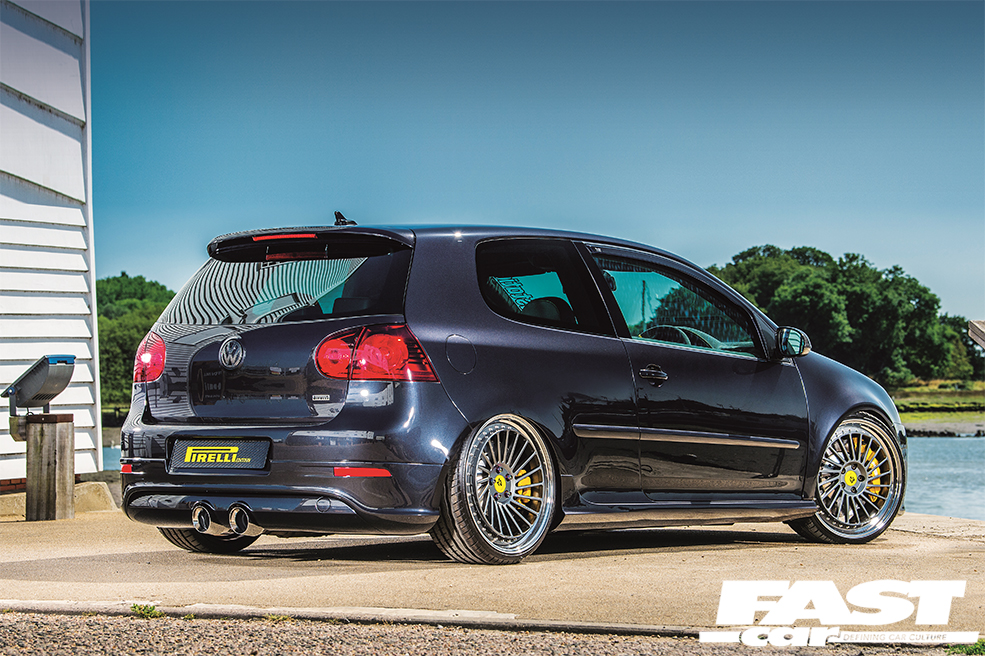 The Mk5 GTI has been roundly embraced by the modifying community for many years now, and there’s a massive aftermarket to support it. Whether you want to turn your GTI into a fast-road weapon, a track car, or an out-and-out show build, you have a near-overwhelming range of options to choose from.

A good starting point is to address the suspension. Uprated lowering springs are an easy option for improved aesthetics and dynamics, although going one step further will pay dividends: a set of BR-Series coilovers from BC Racing is £899. Throw in some Whiteline anti-roll bars (£185 apiece) and get a proper four-wheel alignment, and the chassis will be transformed.

The world’s your oyster when it comes to wheels; with a PCD of 5×112 and ET35-45 there’s oodles of choice on the aftermarket, and of course, the VAG is extensive so there are countless OEM+ options. There’s a lot of choice with brakes too – a simple disc/pad upgrade from EBC will come in at around £270 front and £200 rear (for grooved discs and Yellowstuff pads), and braided lines are a sweet addition to firm up that pedal feel. Or if you’re going all-in, eight-pot upgrades are available from K-Sport for a very reasonable £1100.

Power mods? Now we’re talking… as with any modern VAG product, a simple plug-in remap can unleash huge amounts of extra power and torque; a Stage 1 remap from Revo (£349) will take you up to around 230-255hp and 255-285lb ft of torque. A full 3” exhaust system including downpipe is a must – a turbo-back race Milltek system is around £1700, plus £360 for the downpipe and de-cat – you’ll be needing a Stage 2 map to really feel the benefit of this, and upgrading the induction will be necessary too; the ITG Maxogen system at £385 is a great choice. And once you’re throwing bigger power through the front wheels, a limited-slip diff is a good idea – a Quaife ATB is £850. 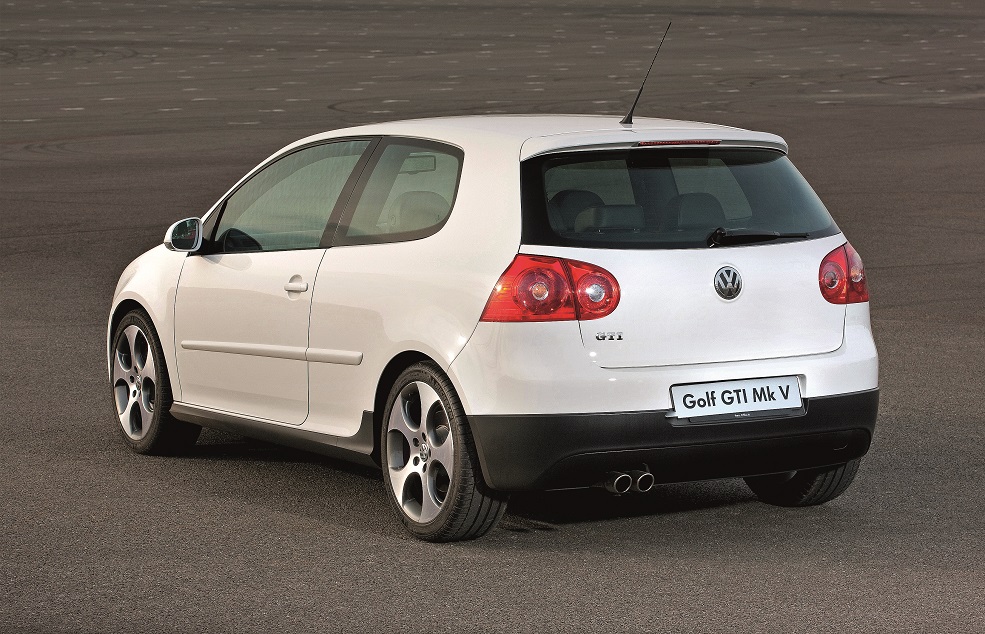 Few cars are as iconic as the Golf GTI, and few have been embraced by the modifying community with such fervour as the Mk5. Indeed, it’s got to the stage that the show scene is so lavishly populated with them (as are the paddocks at any given track day) that it can take a bit of head-scratching to figure out how you can make your Golf stand out from the crowd. Thankfully there’s a massive aftermarket supporting these cars so no two Golfs are exactly the same… and besides, not everyone’s building a one-off for head-turning purposes, so it’s good to know that all the right bits are available off-the-shelf. It’s almost laughably easy to make these cars eye-wateringly quick with just bolt-on upgrades and plug-in remaps, and the chassis can be fine-tuned to perfection with, again, easily available parts. Or perhaps you just want to keep the VW Golf GTI Mk5 stock and enjoy it for what it is. And that’s totally achievable too; there are plenty of unmodified low-mileage examples out there, and the servicing and maintenance parts are inexpensive and simple to source. Now, as ever, the Golf GTI truly represents accessible performance for everybody.

Driver and info: 28-year-old male, with a full NCB, living in the TN14 post code, with a clean license. The car is parked on the drive each night and has light modifications including wheels, suspension, exhaust and air filter.

“If you prefer your cars to have more of an oriental flavour a great alternative to the Mk5 GTi is the FN2 Civic Type R, these hatches are somewhat of a bargain at the moment and while they’re not as raw as the earlier EP3, they are a more refined option, and if you’re looking at the Golf, that’s probably quite high on your must-have list.”