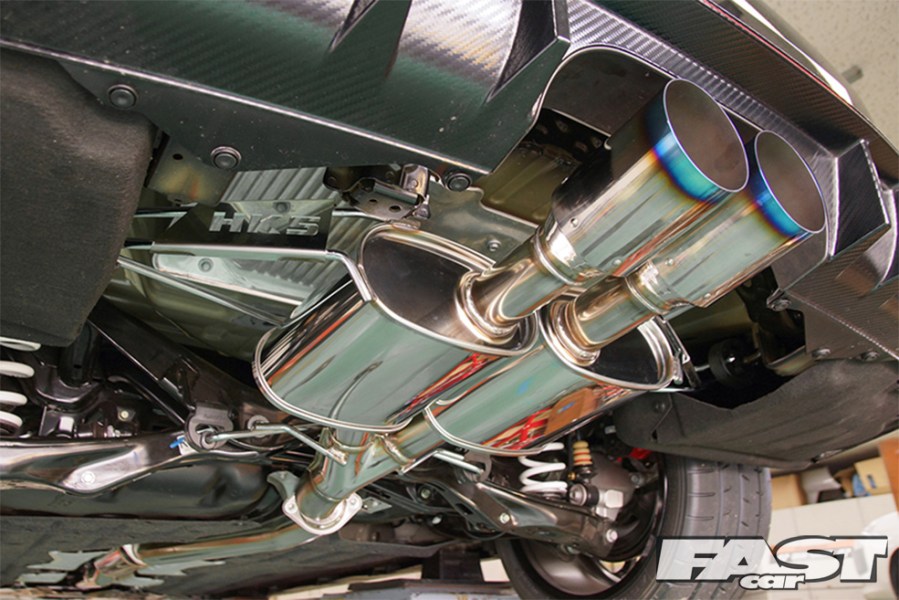 Although it’s probably the most well known car tuning upgrade there is, a performance exhaust system is far more complex than you may think.

Despite having no moving parts and effectively being nothing more than a few metal tubes joined together, a good exhaust system is a vital part of any tuned car, and there are countless types available for almost every make and model.

Because of this, it’s all too easy to get confused about the ideal setup for you and your car, so to help, we’ve put together this informative but easy-to-understand guide to the various aspects of exhaust systems.

THE BASICS
The purpose of the exhaust system is simply to let the waste gasses out of the engine, and the more effectively you can get the exhaust gas out, the more air/fuel mix you can potentially get in, and therefore the more power you can make. Looking at it simply, you’d think that just having no exhaust would be the ideal solution, but it’s not just the huge amount of resultant noise that would be the problem.

On turbocharged cars, you need an exhaust manifold to mount the turbo on, and on normally aspirated engines (and to a lesser extent supercharged engines) exhaust pipe diameter and length is important to keep gas speed high and to give a scavenging effect, which will help get more exhaust gas out of the engine than if you simply had no exhaust at all. So, now that it’s clear why an exhaust is important for usability and performance, let’s look at the main areas to consider…

BENDS
Like most things, exhaust gas flows faster in a straight line than it does around bends, so the straighter your exhaust system is, the better it will flow for any given pipe size. As bends are inevitable, you should try to make them as smooth as possible, and if you have to have a particularly bendy system, you should make it a larger bore than you may normally need for your power level to compensate.

It’s also worth noting that some exhaust systems, especially custom-made ones, can reduce in size a little or crinkle on the bends. We’ve tested an exhaust system where the inside of the bends had crinkles, and this didn’t affect the power output so badly that you’d feel it, but you should always try to make sure that any reduction in diameter at bends is minimised, if at all possible.

PIPE DIAMTER
To put things in the simplest terms, the reason that exhaust-pipe diameter is important is that if it’s too small, not enough exhaust gasses can escape, limiting an engine’s power, but bigger is not always better. Smaller-diameter pipes mean higher gas speeds, which help the scavenging effect that is important on a normally aspirated car. This is when the gas pulses when exiting the pipe, helping to suck the gas following it out far faster than it would naturally, potentially giving significant performance gains. But conversely, a pipe that’s too small limits the amount of gas that can escape, so it’s almost always a balancing act when it comes to normally aspirated engines.

For turbocharged applications, however, from the turbo back there is no such thing as an exhaust that’s too big, while supercharged engines fall somewhere in the middle. Off boost or at low boost, they’re similar to an N/A system, but once the supercharger is producing significant amounts of boost, things like scavenging become much less important than overall flow. Because of this, exhaust systems on supercharged cars are usually designed similarly to those intended for naturally aspirated ones, but with larger diameters to suit the increased power.

The general consensus for engines up to about three litres is that 2.5in is fine for outputs up to around 350bhp, 3in is fine up to around 550bhp, while seriously big-power cars have exhausts that are four or even five inches in diameter.

TURBO DOWN PIPES
The single most important part of an exhaust system on a turbocharged engine is the part directly after the turbine outlet – the down pipe. If this is restrictive (and on most standard cars it is), the turbo responds slower than it could, holds back power and even restricts the maximum boost level. Because of this, it isn’t uncommon to gain upwards of 20bhp from simply fitting a 3in diameter down pipe on a turbocharged car, and for this reason you should always go for a turbo-back rather than a cat-back system.

One thing to note is that the change in power can be so drastic that some cars may need a remapped ECU to cope with the increased boost and exhaust flow the downpipe gives – otherwise the result could be some serious engine problems.

SILENCERS
Unless you’re building a drag car, you will need silencers – an unsilenced exhaust usually sounds terrible, will rule the car out of almost any UK trackday and get you into bother with the police if used on the road. A well-designed straight-through silencer should make the car significantly quieter with no performance loss, and a car pushing out four figure power numbers can be silenced to pass track noise regulations with a little effort.

Many standard silencers are far from free-flowing, but practically every aftermarket silencer you see is straight-through and flows almost as well as a plain pipe – ideal for performance cars. It’s worth noting that due to the turbo doing a good job at silencing, turbo cars are generally easier to silence, often needing only two good-sized silencers to pass track noise regulations, while normally aspirated and supercharged cars often need three or more, depending on size.

MATERIALS
Most standard exhaust systems are made from mild steel, which is cheap, but rusts over time. These days, almost all performance systems are made from stainless steel, which, although not as cheap, doesn’t rust and therefore has a very long life. There are some other materials used on more exotic applications, such as super-light titanium and inconel (for very high temperatures), but these are rare and expensive. On some cars where weight saving is more important than longevity or heat resistance, aluminium has even been used, but we wouldn’t recommend it.

MANIFOLDS
This is the part where the individual pipes from your exhaust ports merge into the rest of the exhaust system, and on turbo engines it is also where the exhaust gases reach the turbocharger. On naturally aspirated engines, a good manifold is vital to the power output, and the diameter and length of the pipes can be individually tuned to suit certain engines. While space restrictions almost always make this a compromise, an expert can noticeably improve engine performance with a well-designed system.

On turbocharged engines, while a free-flowing tubular manifold is certainly a good thing, due to the pressurised inlet air doing a good job of forcing exhaust gas out of the engine, you can still get surprisingly large power figures while retaining what look like very basic cast exhaust manifolds.

On both naturally aspirated and turbo manifolds, there’s a fine balance to be struck between having pipes that are small enough to keep the exhaust gas velocity high (which helps scavenging on a normally aspirated engine and turbo spool-up on a turbocharged engine) and big enough to flow sufficient exhaust gas for the intended horsepower level.

COATINGS
On tuned road cars and almost all racecars, it’s common to see at least some of the exhaust covered in heat wrap or ceramic coating. The purpose of this material is to keep heat inside the exhaust. Hot exhaust gas moves faster, and this increases exhaust flow and also helps the turbo to spool quicker. Also, when less heat is radiated by the exhaust, you get lower temps elsewhere in the engine bay, improving power and reliability. The main disadvantage of wrapping or coating is the risk of damaging your exhaust and/or turbo through overheating.

Ceramic coating is certainly the neatest and longest-lasting way to coat your exhaust, but it needs to be done by a specialist and therefore will cost you more money than wrapping. Exhaust wrap is fairly cheap and can be fitted easily, but it degrades over time, meaning you may have to re-do the job once a year.

CATALYTIC CONVERTERS
MoT regulations mean that cars registered after August 1992 have very strict emissions limits that are practically impossible to pass without a catalytic converter, so for MOT time at least, these cars will need a cat. The thing is, standard catalytic converters, especially on tuned engines, are very restrictive, and that’s where sports cats come in. While sports cats certainly aren’t totally unrestrictive, the honeycomb cells inside the cat are much larger than standard, enabling much higher gas flow than with standard items. Cell size can vary, with larger cells generally freer flowing but less effective on the emissions side of things, but all aftermarket cats that have been designed for road use should get you through an MOT no problem.

If you have a particularly powerful car that even a sports cat would restrict, there are two solutions: You can run a Y-pipe and have twin cats side by side, or run a de-cat pipe and pop the cat back in for MOT time. Finally, you may have noticed the tailpipes on WRC rally cars glowing. This is actually the catalytic converter, which is placed at the very back of the exhaust on WRC cars, as it poses the least restriction there. It glows red-hot partially due to how cats work and partially due to the extreme heat that hard driving and anti-lag systems produce.

TAIL PIPES
Although they have no performance function, tail pipes can not only improve a car’s looks, but also affect the noise produced. They work a bit like a trumpet – larger tailpipes generally give a louder sound, even if all other parts of the exhaust are exactly the same, and direction a tail pipe is pointing can affect things, too. A downward-facing tailpipe generally sounds a little quieter and is often used on diesels to dissipate black smoke by firing it at the ground rather then directly out the back, while side-exit exhausts are sometimes used as a sneaky way of avoiding noise meters on tracks, where the exhaust is on the opposite side of the car to the meter.

BACK PRESSURE
There’s a common misconception that cars need back pressure for performance, but this simply isn’t true. Back pressure is never good and always hurts performance, but sometimes it can be the lesser of two evils. On a turbo car, from a performance point of view, the best post-turbo exhaust is no exhaust, so bigger is better. But if your turbo is a little worn or the oil pressure at the turbo is excessively high, oil can seep past the seals without back pressure holding it back, which results in a smoky exhaust.

Of course, it’s better to sort the oil seal problem than have back pressure, but that at least explains where the misconception comes from. On a normally aspirated car, the reason why people think back pressure is needed is that an excessively large exhaust can spoil performance by lowering gas velocity too much. In this case, having a little back pressure with high gas velocity is actually the better of the two options.

SCREAMER PIPES
A screamer pipe is simply an unsilenced exhaust pipe coming from the external wastegate of a turbo. They are silent until full boost when the wastegate opens, at which point they make a huge amount of noise due to being unsilenced, hence the name. As they are so noisy, most cars with a screamer pipe will fail trackday drive-by noise testing, so don’t consider one if you are heading for the track.