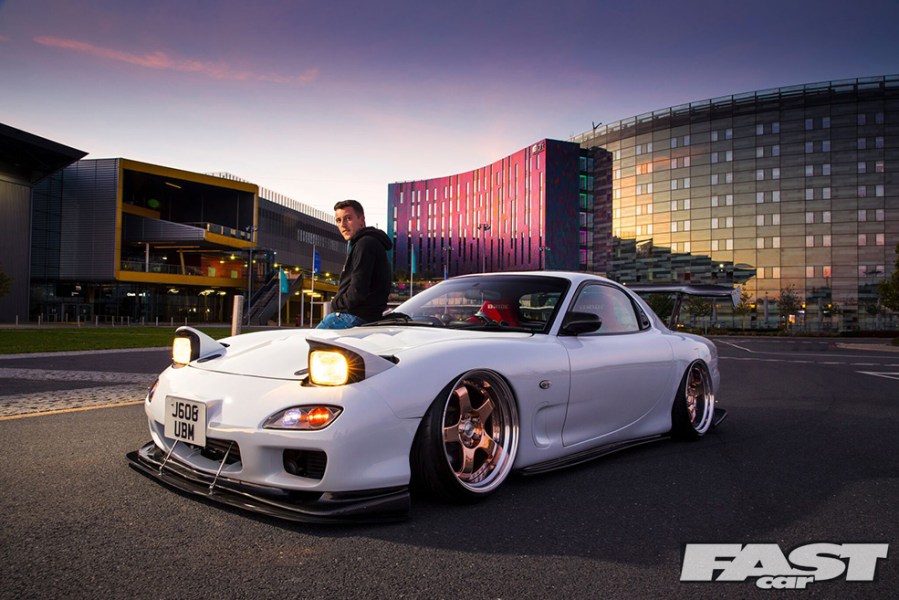 Jordan Saunders has had a few ups and downs with his Mazda RX-7 FD build. But with the aid of a few good cups of tea, everything’s turned out alright in the end…

An army, as the old saying goes, marches on its stomach. Napoleon Bonaparte coined that phrase, and he knew a thing or two about sipping burgundy while watching his troops on the march. And while it’s all very well trying to be macho and following the ‘blood, sweat and beers’ ethos of certain tuners who’ll tell you that creativity flows forth from smashing back a few cans, those are the people who’ll turn up to a show one day with mysteriously singed hair or their fingertips missing. No, the true heroes of the scene are fuelled by good ol’ cups of tea, stirring it with an oily spanner and refusing to wash the mug so that the inside of it looks like it’s crafted from rich mahogany.

Furthermore, the heroes behind the heroes, as it were, are the ones who are constantly flicking the switch on the kettle and making sure there’s a ready supply of PG Tips in the caddy. People like Jordan Saunders’ nan, for example, who essentially fuelled the entirety of this RX-7’s build by keeping its owner and craftsman readily charged with an ever-present cuppa and the odd sandwich to boot. “My nan put up with a lot, having a pair of dismantled Mazdas on her driveway for months on end,” Jordan laughs. “But thankfully she makes a great cup of tea.”

This isn’t the first time Jordan’s pulled the innards out of a Japanese car with the aim of making it faster and better, although it’s fair to say things have never gone quite this far before. Way back across the blinking time circuits, he started out with an EG Honda Civic, tearing it down and rebuilding it from first principles, swapping out the 1.5 for a B18, and it was in the course of planning a turbo conversion for it that he was struck by a lightning bolt. Not a literal one, of course, that’d be terrible; no, we’re obviously speaking figuratively. Said lightning bolt was the rapidly dawning realization that, at the tender age of 21, he’d be able to insure an RX-7. “Well, that was decision made,” he recalls. “As soon as I figured that out, the Civic was up for sale and I was searching for a Rex!”

After a little bit of hunting about, Jordan acquired himself a twin-turbo FD – the very one you see here, although it was rather different back then. Largely stock, it had simply been tickled with a set of coilovers and some fresh rims. Spec is largely irrelevant when you’re a 21-year-old in an FD of course, as the very fact that you’ve got such a thing at all is so obscene that it’s cause for constant jubilation. Until the bloody thing breaks, that is. Which it may well do. Jordan’s certainly did.

“It wasn’t long before the dreaded RX-7 issues arose,” he grimaces. “The sequential twin turbos were trouble – either they wouldn’t kick in when they should, or they were just very intermittent, thanks to the rats’ nest of vacuum lines and solenoids. I simplified all of that and thought I’d made it better, but it still wasn’t great. More drivable, yes, but definitely not right.”

In addition to this catalogue of woes, Jordan had been having one or two issues with body image. The decision to fi t a Feed-style widebody kit had necessitated cutting out the rear arches, although when he came to fi t the air-ride, this turned out to be a bad move. First of all, though… air-ride on an FD?! Yep, this is full-on purist baiting stuff, Jordan’s stellar mix of AirREX struts and Air Lift management leading to something that makes the finished product look totally badass while also really irritating the members of the various RX-7 owners’ clubs. But we digress – the FD was far from finished at this point…