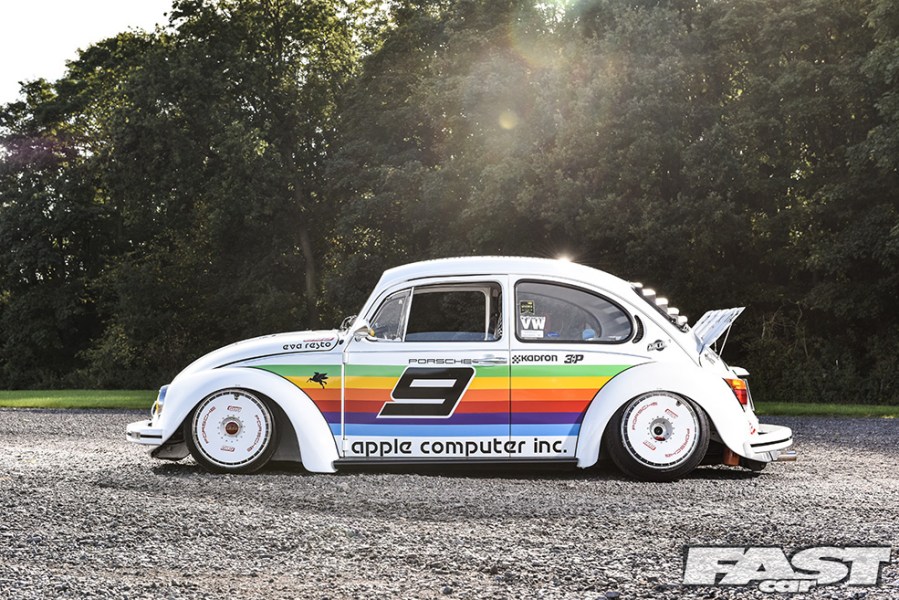 It might not be able to call on quite as much power as its bigger, more illustrious brother, but Max Edwards’ Apple Beetle remains one of the most unique air-cooled VWs in the UK’

Have you ever noticed that, historically speaking at least, the bad things in life produced the best and most iconic race and rally liveries? It’s impossible to think of motor racing in the ‘70s, ‘80s and ‘90s without picturing John Player Special bedecked Lotus 78s, Martini clad Lancia Delta Integrales and McLaren mp4/4s painted with Marlboro war paint. Thing is, there are actually all manner of other, less well-known liveries from motorsport’s golden era that didn’t promote fags and booze yet still looked amazing, and perhaps the best of all was the Apple Computers Porsche 935 K3 of 1980.

Hard as it might be to believe nowadays, Apple was once the rogue outsider, the plucky, technologically gifted upstart with its roots firmly in the ‘60s counter culture revolution, which of course made it the ideal choice to sponsor the immense, flame-spitting 935, complete with a 750bhp twin-turbo flat-six slung out the back! Steve Jobs was very much a ‘Porsche man’ in the ‘80s and clearly had a thing for Le Mans, hence why the Apple-clad Porsche could be seen monstering the Mulsanne straight in the summer of 1980, until it retired with a melted piston of course.

All of which leads to the VW Beetle you see before you. No, it doesn’t have a monstrous Porsche flat-six where its air-cooled four-pot should be, and no, it hasn’t been built to take on all comers at the most gruelling race in the world. What it is, is a tribute act, one built by a passionate Porsche fan without the six-figure budget needed for the real McCoy.

“The Beetle is actually my first car, I bought it 6 years ago and haven’t looked back,” recalls Max. “It was a tidy if not exactly immaculate car back then; it was structurally solid in all the important areas, but the interior was rough…a bit of a ‘rolling resto.’

Max used the car on a daily basis for a good 2 years, adding parts as he went and generally trying his best to keep on top of the inevitable issues which arise from running a near 40-year-old car as a daily driver. Along the way he treated the Bug to a slew of classing engine tuning mods, using the 1641cc engine as his starting point. The motor eventually gained a chunky fast road cam, a lightened and balanced bottom end, larger carbs and a free-flowing exhaust system, enough to give the Wolfsburg icon a new lease of life and enable it to hold its own in the hurly-burley of modern traffic.

“I took the car off the road at the end of 2013 and began a completely strip-down. It actually wasn’t that bad bodywork wise but I knew that I wasn’t to ensure it would be good, solid car for years to come, and I hated the idea of it needing welding for each and every MOT and winding up as a ‘patchwork quilt’ of a car.”

A desire to turn the Beetle into a fully paid up show-stopper kicked in, hence why Max had the whole shell powder coated. He also invested in an array of brand new panels, including doors, floor pans and wings, before having the once silver car painted in the coat of brilliant, gloss white it now sports. Max initially regretted the latter as he felt it made the car look a little plain, but it also made him more open to the idea of applying what has become one of the Beetle’s signature traits, the Apple livery.

“I love Porsches and Beetles and have even owned a few 928s, but my budget can’t stretch to an air-cooled one,” muses Max. “I’ve always been a fan of the old 911 race cars though and had the idea of applying one of the more iconic liveries to the Beetle sometime after it’d been painted. I considered all manner of different colour schemes but settled on the Apple one as it’s so unique, it being the only race car Apple have sponsored to date.”

The resulting livery is hard to fault, and there’s no denying that it really, really suits the similarly styled Beetle, though it did force Max to up the ante styling wise if he was going to draw further parallels with the flame-spitting 935 ‘flachbau’ he was paying homage to. The most obvious examples of Max attempting to really highlight the relationship between his Beetle and the Porsche are the wheel covers which sit atop a set of stupidly rare Porsche fitment BBS RS wheels, another of the former’s signature components and additions which caused quite a stir when they were unveiled earlier this year.

“They’re completely home-made, I used a mixture of laser cut aluminium and plastic composite to make the fans and fan covers, and they tighten securely to the wheels through my own, bespoke aluminium centre nuts,” Max explains. “I’ve had plenty of people come up to me and ask to buy sets, but they take a lot of time and money to make, more than most are willing to pay.”

‘Turbo fan’ wheel covers have come to be associated with some of motorsport’s most iconic machines, including the Group A Lancia Delta Integrales, Sierra Sapphire Cosworth rally cars, and most famously of all, the Porsche 935 K3s. Their turbine style helped to funnel cool air into the brakes, in turn helping to preserve ultimate stopping performance – of paramount importance when monstering La Sarthe. While it’s true that those on the front of Max’s car probably do have some kind of effect, the impact they can have on the drum-shod rear is negligible, but they stilll look cooler than a penguin scoffing a Mint Feast in a blizzard!

The need to complete the look and to do the rest of the car justice saw Max turn his attention to another area, the interior. This was perhaps the area of the car most in need of real work when Max first bought it, and he wisely opted to continue the Porsche theme in a big way, hence the full re-trim in leather and genuine Porsche Pasha material by Ed Aldridge. There’s more Pasha on the door cards and parcel shelf (home to air management build – more on that in a moment), plus grey alcantara for the headlining, an early (not to mention hard won) early Porsche 924 2-spoke wheel, a genuine Hurst shifter and a not inconsiderable Auto Meter tacho guage.

The icing on the cake was undoubtedly applied at the start of last year, when Max opted to take the plunge and invest in some air suspension. The system he eventually plumped for, a system he subsequently fitted himself, consists of front air shocks and a custom beam up front, with a suitably modified Limebug kit at the rear. The air management hardware now resides in a suitably plush build within the parcel shelf area, and the whole setup is, not to put too fine a point on it, a work of art.

The Apple-ised bug went down at storm throughout the UK’s summer show season, with one undoubted highlight being when Max first fitted his custom ‘turbo fan’ wheel covers soon after arriving at Edition 38. He’d only finished painting them that very morning and had never seen them on the car in all their glory, so the moment when he was finally able to stand back and admire his handy work was, perhaps unsurprisingly, one to be savored. He went on to scoop a top 5 award for having one of the best air-cooled cars at the show, no mean feat when you consider the caliber of the cars at Edition.

As for the future, well Max is adamant that he’ll never sell his first car as the pair have simply been through too much. That being said, he does admit that the Beetle will soon be temporarily retired in favour of a Porsche, a car that we’ve every confidence he’ll stamp his personality to in just as unique a manner. Can anyone think of a famous racing Beetle livery to grace it…?

Thanks
Special thanks go out to my ever supportive of my silly life choices (more car parts or save towards a house?) girlfriend Emma, Dad for help with the bodywork and paint prep back in 2014, Ed Aldridge for sorting me out a killer interior and making a sick job of it, and all my good friends for making the shows and car life not just about the cars!