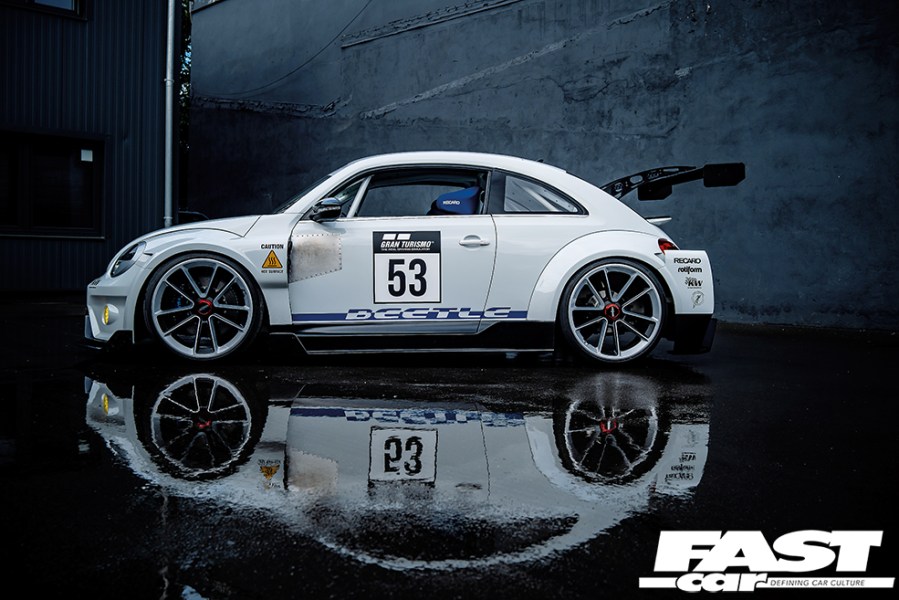 Hot on the heels of the Kyza/Prior Design collab Mk2 Golf, JP-Performance has been working on a widebody VW Beetle inspired by Gran Turismo with a TTRS five-cylinder engine, and this is it…

The JP-Performance story is well documented with 40-year-old Jean-Pierre Kraemer (JP) being something of a household name in Germany. JP has been in the automotive sector his entire working life; starting at Porsche, he then worked for 9ff for a period before starting a business with a partner. In 2012 he decided to go it alone and set up JP-Performance. JP now owns no less than eight companies mostly specialising in motoring niches. Work as a TV presenter, race driver, and YouTuber have made him famous and with involvement in design, real estate, clothing brands and even owning the Big Boost burger restaurant that flanks the side of the JP-Performance building in his native Dortmund, it’s a job to know how he finds time to sleep. Thankfully he squeezed us in and was able to explain that he is very much ‘one of us’ with regards to his long love affair with VWs. His first car was an 86c Polo: “At the time there wasn’t a choice, I was just happy to have a car. My colleagues presented me with that very same car for my 40th birthday present. I was delighted to be reunited with the car where it all started. It’s a lovely little thing and I get a lot of joy driving it. I’ve been into VWs all my life. I live for it. The brand for me says quality, image, and enjoyment. I feel you can never be ‘in the wrong suit’ in a VW. For example, you can turn up anywhere in a Golf GTI and feel proud”. At this time, JP’s extensive car collection includes the Polo, a Fire and Ice Mk2 Golf (GTI), that bonkers Mk2 Golf, an up! with a 450 BHP 1.8T motor and 4WD, multiple parts dubs including a Phaeton and, of course, the infamous ‘Super Golf’ as featured in Performance VW May 2020 issue. 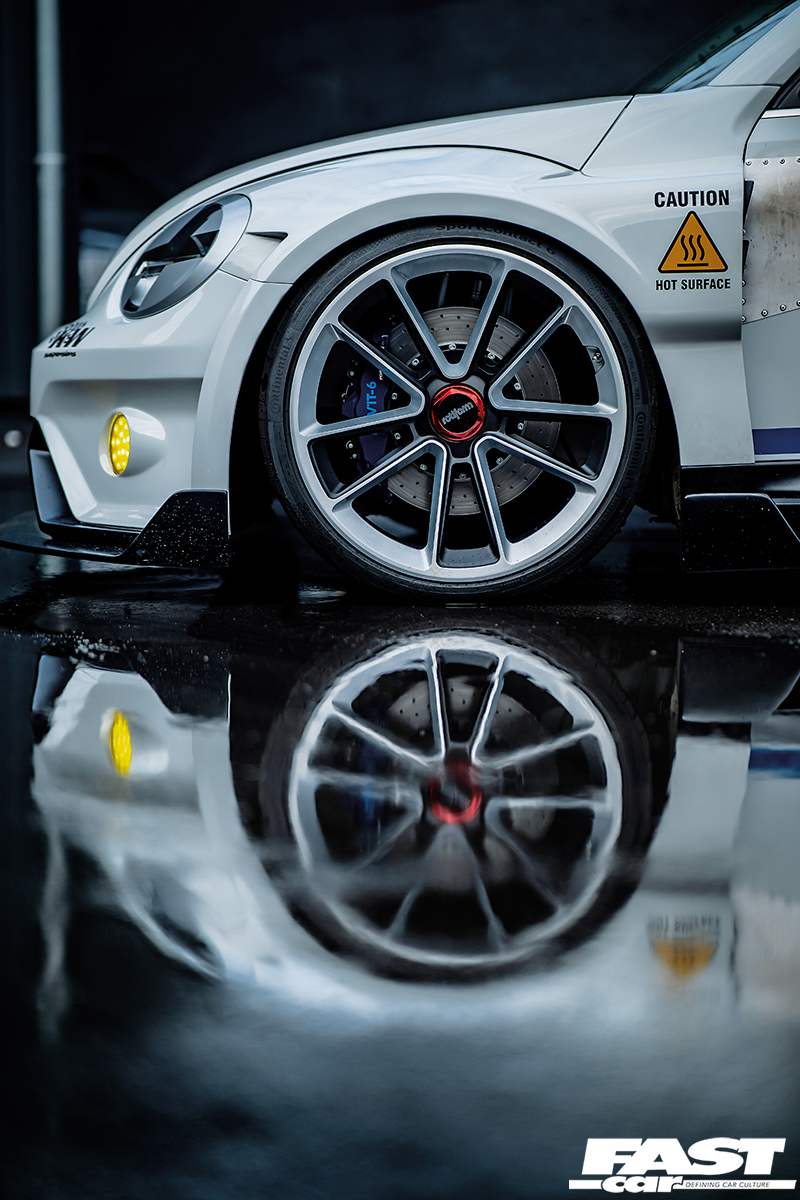 The Gran Turismo story is even more ubiquitous. Hard to believe that the first release hit the PlayStation scene back in 1997. Polyphony Digital continue to expand and develop the series. The fictional ‘Volkswagen Beetle Gr.3’ features on the 2017 Gran Turismo Sport and is set to be included in the eagerly awaited Gran Turismo 7 which is set for a March 2022 general release.

There is a degree of mystery surrounding the exact origins of the computer game-based Beetle Gr.3. Famous developer and tester Kazuki ‘YAM23’ Yamada has stated that the car was designed by VW Motorsport. VW’s party line is that, although officially licensed for the franchise, it was designed by the Polyphony Digital LA-based team. Unlike most fictional Gr.3 cars in the game, this choice generates default drivers’ names: Bjoern Hackbarth, Tom Holden and Xavier Davallee (all three names are real-life designers that have worked for VW). JP explained: “I had seen this car whilst playing Gran Turismo many, many times. I’m not really a fan of the A5 era VW Beetle on which it is based but the proportions of the wide arched car in the game were so perfect, it made sense to me to build a replica. I asked my contacts at VW whether there was a prototype or at least a model in existence but sadly the answer always came back as a no”. 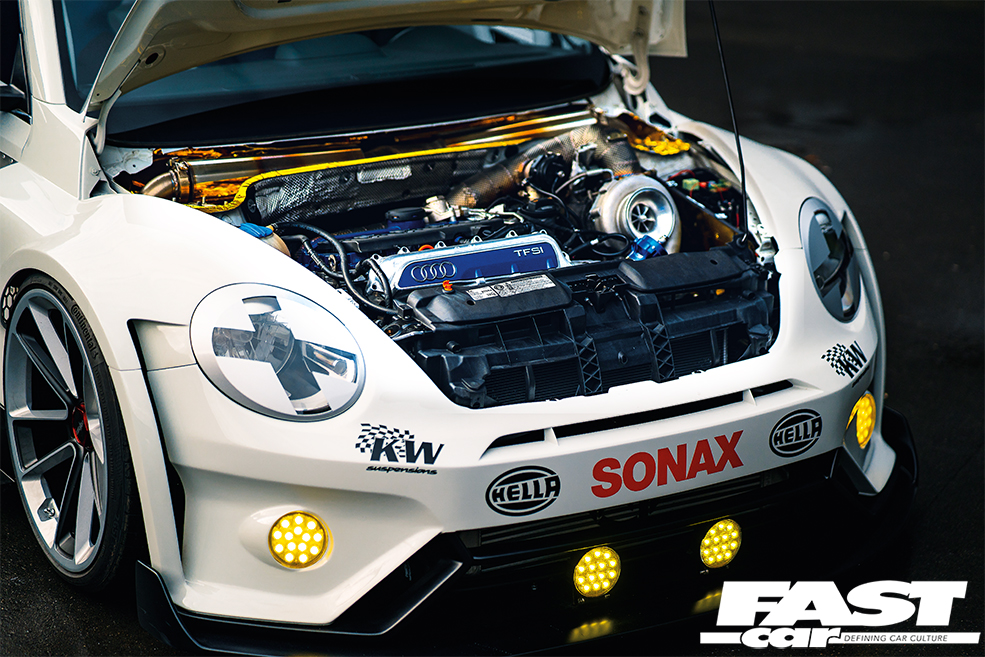 The cheapest VW Beetle on sale in Germany was collected. It was far from pretty but given the amount of re-engineering that was to unfold, it felt like the right car for the job. Like all the full JP-Performance builds, first on the agenda was the teardown. From here a naked chassis assembly allows easier access for engine swaps and wiring. Reassembly then takes place to shake the car down and ensure teething troubles are ironed out prior to a final dismantling process before the car goes to paint. Re-assembly and final touches are then completed to achieve the finished article. This project was completed within 20 weeks. 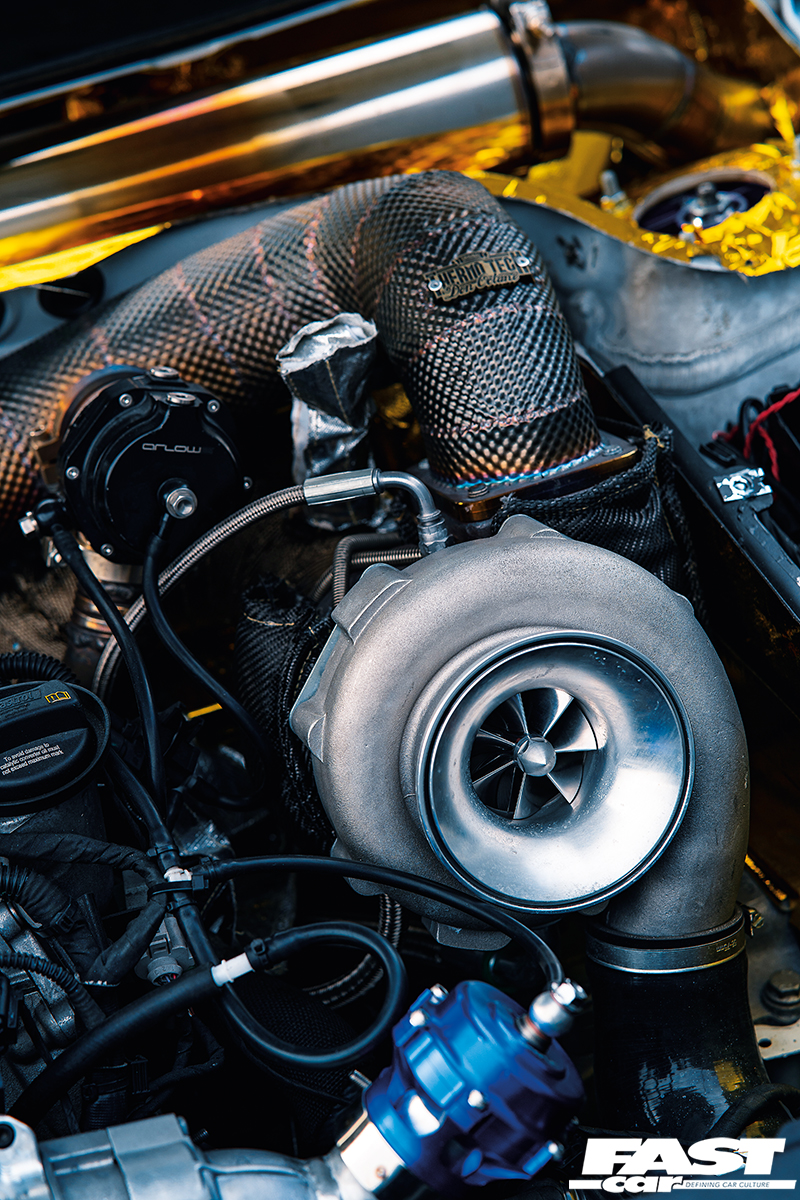 In the game, the widebody VW Beetle sports a 2.0-litre TFSI four-cylinder engine and a seven-speed DSG box but a degree of poetic licence has been utilised with this realisation. JP had the 2.5 five-cylinder Audi TTRS/Audi RS3 engine in stock and had been waiting for a suitable car to use it in: “It’s a fully built engine with uprated bearings, rods and pistons. The car retains stock cams. Whilst I wanted the car to have a good turn of pace, I have not gone over the top with it being front-wheel drive. Traction is aided with the huge 22” wheels. The car runs an uprated turbo which we have side-mounted on a custom manifold, this looks great, but it caused even more of a headache for the routing of the exhaust.  The exhaust needed to exit out of the apertures on the widened front fenders on both sides. To achieve this, you’ll note that it goes partially behind the dashboard and then snakes into the compartment that usually houses the windscreen wiper assembly. The surrounding area has been carefully coated in gold heatproofing and the exhaust itself is expertly wrapped with Thermo Tech heat wrap to keep things safe. With the exhaust exiting out of the fender just forward of the door, the issue we have with heat is remembering that when the car is running you can’t just pop off for a chat with the door open as it quickly starts melting the door card! Despite this slight inconvenience the exhaust must be my favourite part of the build. Driving along and seeing the flames shoot out right next to your head, that’s a crazy new experience!” 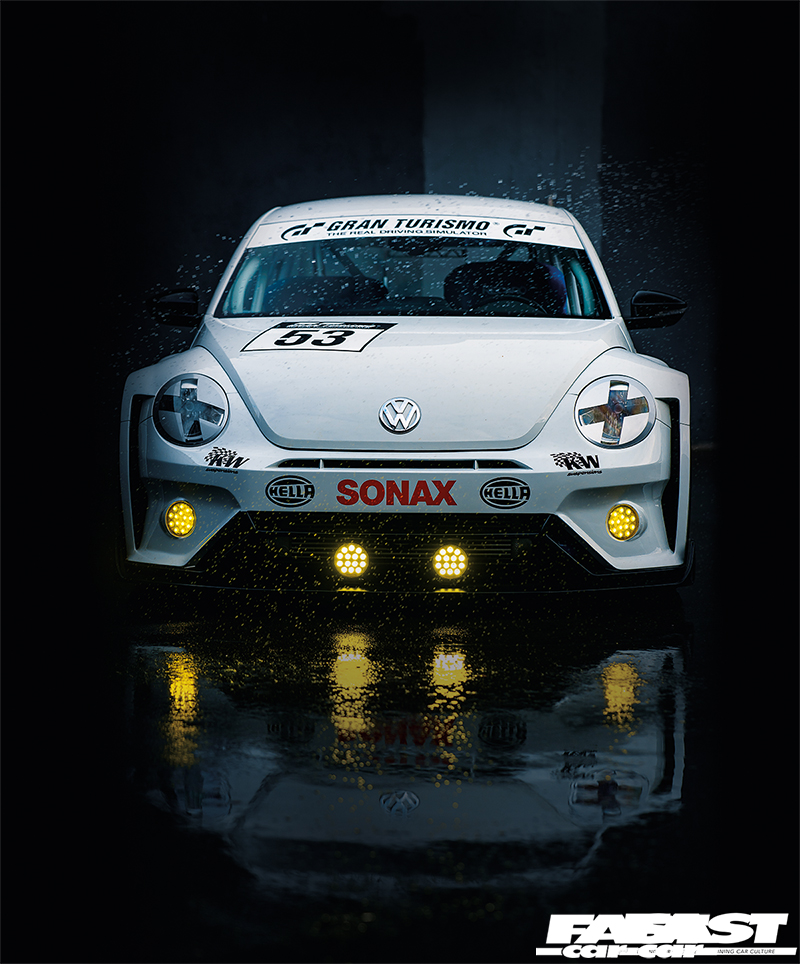 JP-Performance have worked with Prior design to produce a body kit that apes the wide arched and aero-equipped racer from the series. A limited run of these bodykits is available to the public. As the Prior Design website reads: “Sony and Volkswagen have both signed off on this design kit officially. Therefore it will be limited to 53 kits only. Worldwide. It doesn’t get any more exclusive than this”. All kits will be signed by JP and Prior’s Andreas Belzek. This level of quality and exclusivity does not come cheap though and a kit costs 5990 Euros plus shipping.

The widebody VW Beetle has been sprayed VW Motorsport white as per the game. VW Motorsport blue has also been used on the engine badge backgrounds and the impressive MOVIT Forged callipers from the six-pot big brake kit. Herbie 53 racing numbers are another feature of the game and a cheeky nod to the air-cooled star of the Disney film franchise and the heritage of the model. Metal heat shields on the doors do their best to prevent heat scorch. The racing sponsor graphics take their steer predominantly from the game as do the yellow LED foglights that poke menacingly out of the front valance. 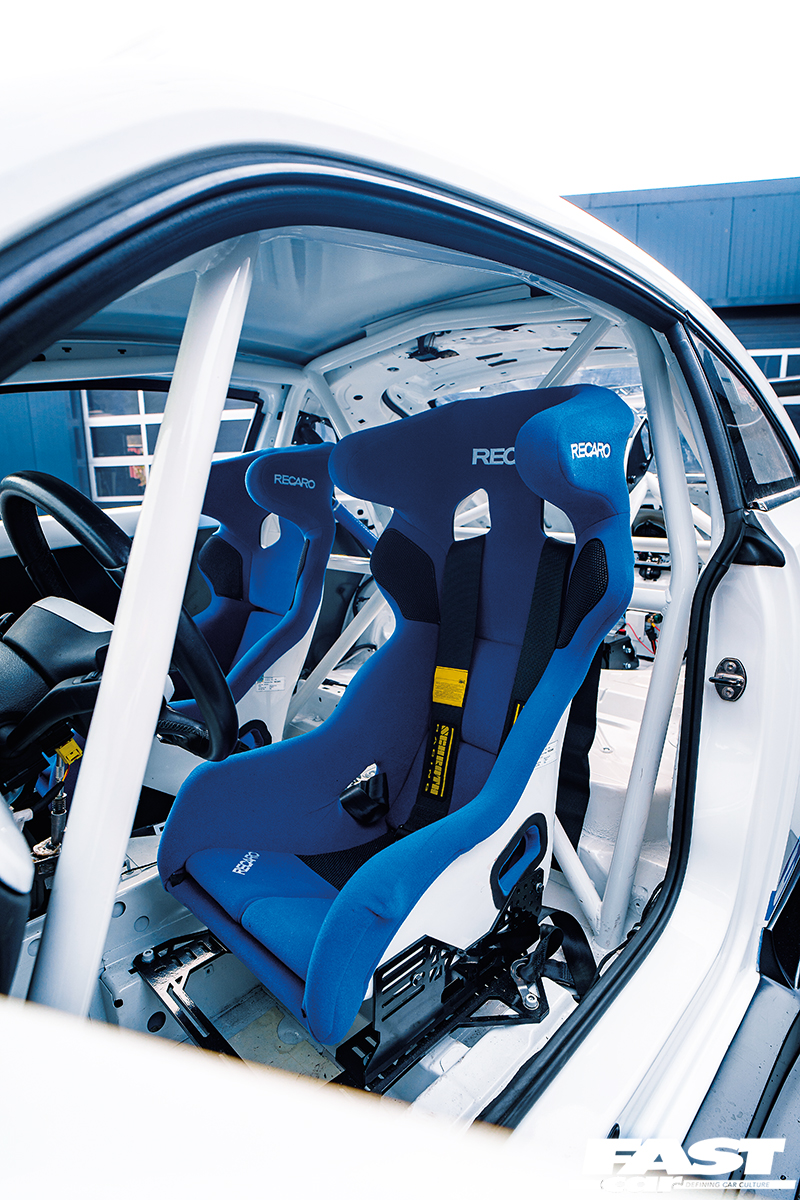 Going back to the wheels that JP mentions above, these were custom made by Rotiform. They are an exact replica of those used in Gran Turismo and utilise original data from the game. The 22” diameter matches the drama of the kit. KW coilovers have been fitted because of the good quality and ride of the product. Their Hydraulic Lift System (HLS) option that allows the front of the car to be lifted at the press of the button was a must with this car with it riding so low. An aggressive multipiece adjustable rear wing dominates the rear profile of the car and attaches to the bespoke roll cage through the openings in the custom Perspex rear screen. 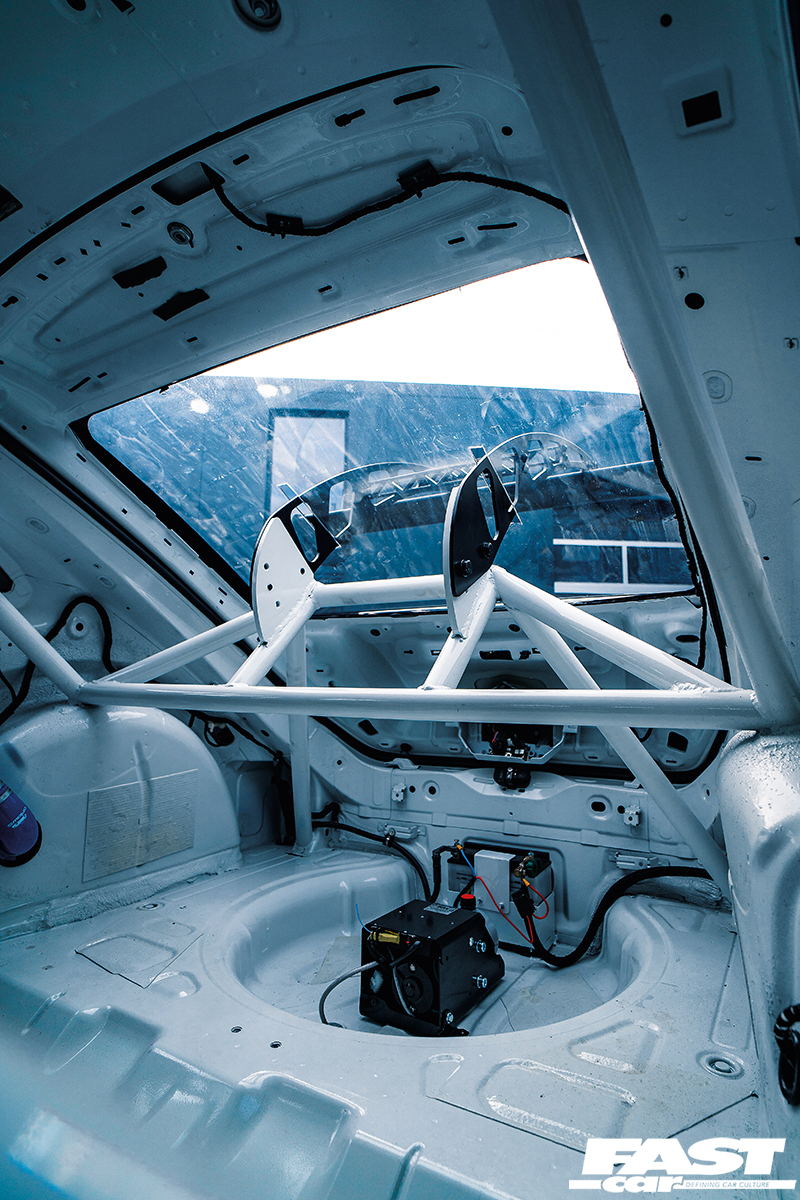 The interior of the car continues the white and blue theme with a body-coloured roll cage and blue Recaro Pro Racer seats grabbing the limelight. Other motorsport details like the battery relocation to the spare wheel well and Schroth harnesses look right at home. A custom plinth, again in white, dominates the dashboard and gives a minimal clinical appearance. A binnacle surround has been made in the same finish which houses a digital racing display. A pod of auxiliary gauges sits on top of the dash to monitor those all-important ‘Ts and Ps’. Carbon fibre door cards with blue pulls bring the whole package together nicely. 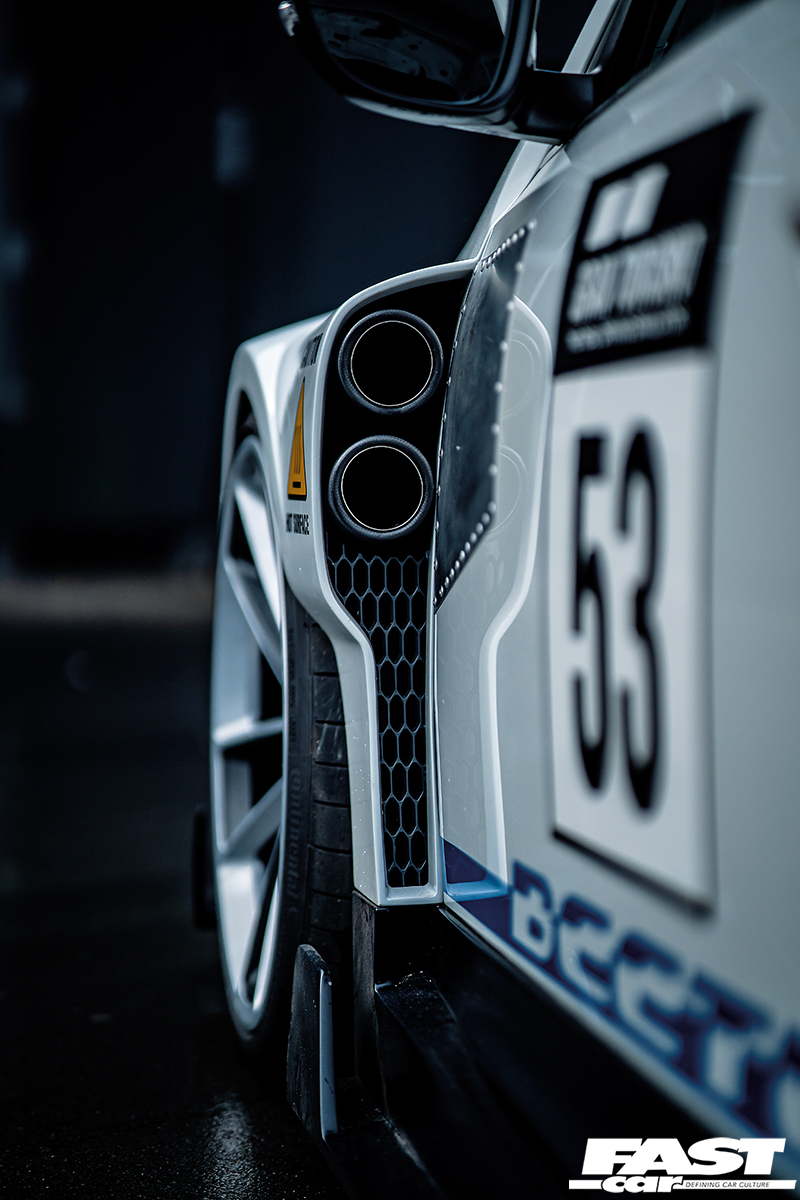 JP is justly delighted with the finished article: “Normally I say a project car is never truly finished but, in this case, we have achieved the aim of getting it very close to the Gran Turismo car. I think it’s one of the best cars we’ve ever done and, as you know, we do a lot”

What’s next? JP-Performance always run a busy schedule with eight or nine projects being simultaneously worked to completion. So, with two high profile VWs breaking cover recently will it be ‘game over’ for a while? No chance, JP teased us with talk of a future collaboration with Kyza, informing us that a further render has been produced and he is considering bringing it to life. It’s said to be “even more extreme and out of this word”. We can’t wait for the next level, the team at JP-Performance are not playing games. 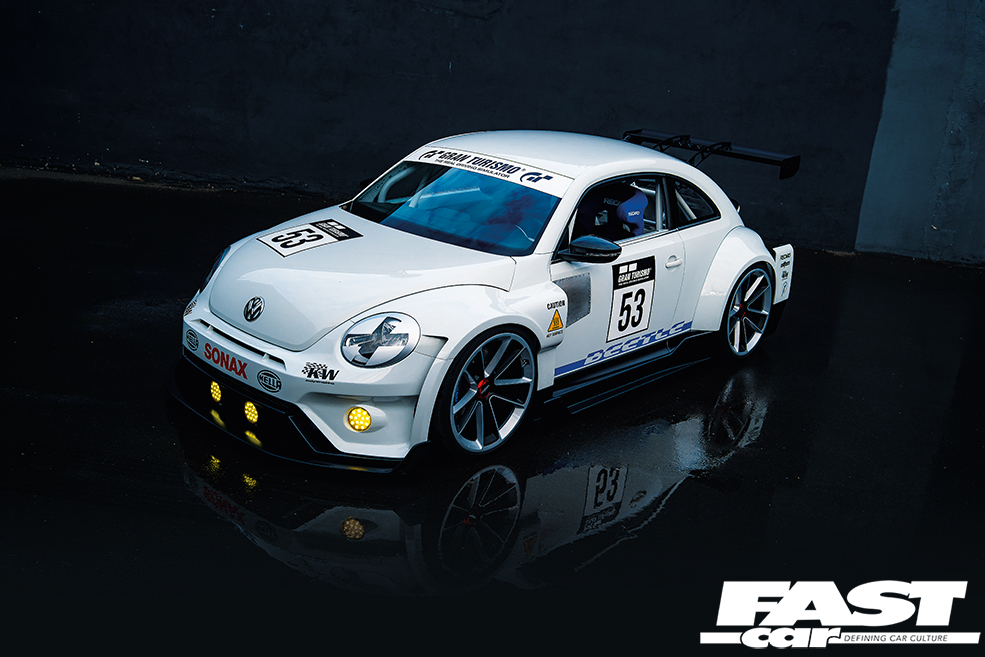