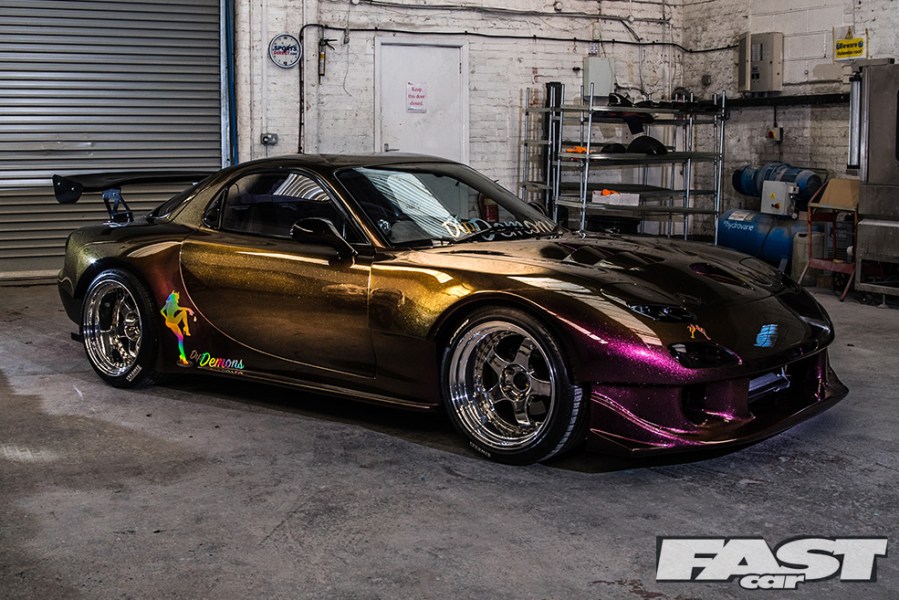 One of the earliest examples to boast a wide-arch kit back in the day, Jared Carter-Oram’s modified Mazda RX-7 has always been way ahead of the curve. And now it’s back in its latest guise, showing us what we’ll all be doing to our cars a few years from now…

We’re all familiar with those so-called predictions made by that slightly unnerving Nostradamus dude hundreds of years ago. Fans who have read between the lines of his work claim that he’s successfully foreseen everything from natural disasters through to world wars in his extensive collection of writing.

And while it’s unfortunately probably nothing more than coincidences dragged into the public eye by those with a particularly strong passion for conspiracy theories, we’ve recently stumbled upon what appears to be a real-life version of this strange phenomenon in action, in the form of Jared’s trailblazing tuned Mazda RX-7 here.

You see, our Devon-based paint technician seems to have a knack of performing modifications to his beloved long-term project car that eerily always seem to become the next global trend a few years after he’s completed them. Take our advice: keep close tabs on this geezer if you want to stay at the bleeding edge of future modding styles.

“I did the wide-arch conversion basically from scratch soon after buying the car, when I moved back to Devon and started my company, Dip Demons,” he modestly explains, hinting at one of the first of many alterations to be performed to this rotary-powered stunner several years ago. “In fact, I sometimes wonder whether other bodykit companies actually used my designs as inspiration!” Developing the now well-established hydro-dipping company, Dip Demons, Jared thought it’d be a great idea to make his personal car stand out a bit more to show off what services he could offer. Which is where the idea to convert the car to a widebody affair came from.

The problem was, this was long before the days of the bolt-on kits we’re now all too familiar with. Which meant he had to get a little creative and start from square one. “I liked the look of the old Fortune kit, but it was way too expensive for my liking,” he says.

“I therefore made some arch extensions from scratch, which were then blended into a widened RE Amemiya front bumper and the car’s standard rear bumper.” The results look just as epic as any Liberty Walk or Rocket Bunny-kitted car out there, which make the fact this work was performed the best part of a decade ago seem all the more incredible.

Although this JDM example of Mazda’s finest coupé only had a miniscule 17,000 kilometres on the clock when he snapped it up, Jared is the first to admit it was a bit of a dog to start with, especially in terms of the engine and bodywork. With the braphappy lump falling a long way short of full health, combined with the fact he was keen to switch up the auto gearbox to a manual offering, the next chapter of the story revolved around freshening up that drivetrain while adding a whole lot more power to boot.

It’s for this reason the car was dropped off at the legendary Steve Revett’s garage – a guru of all things rotary. Given the loose brief to keep things reliable while increasing the number of ponies on tap, Steve soon got to work giving that 13B motor a full overhaul, with a lumpy-idling street port thrown in during the rebuild to open up more possibilities later down the line.

Swapping up the smaller duo of standard turbochargers for one huge HKS boost snail, complete with all the other turbo-related upgrades you’d expect, like that trick V-mounted intercooler, Steve soon dialled in a figure of 501bhp from the car’s new APEXi ECU when it was strapped onto the rollers – complete with an eargasm inducing soundtrack, of course.

“It’s amazing now,” says Jared unsurprisingly. “The power delivery is so smooth – there’s a much more progressive feel to it all than when it was running the twin-turbo setup. Oh, and it’s incredibly loud, of course!”

With its subtle drop on some coilovers and those colossal dished WORK split rims propping up each corner (the likes of which were a very rare sight in the UK at this time), Jared enjoyed showing off his cutting-edge RX-7 to the masses at various shows throughout the next few years, with each season bringing with it a new aesthetic in the form of trick paints and awesome hydro-dipped panels applied by himself and the team at Dip Demons. You might remember seeing the car in one of its many previous forms (the lime green phase was one of our particular faves) as it successfully kept onlookers on their toes each year.

But there’s no denying the outright epic-ness of the way this thing looks right now since its most recent outfit change, with Jared keen to push things forward and show those who love the car so much just what to look out for on the show scene over the next few years. “The flip colour actually comes from the lacquer, the base paint is black,” he surprisingly reveals, touching on that unmissable dual-tone hue the car now sports.

Hailing from Japan and rather curiously being developed off the back of new nail polish technologies, this ‘Magic Colour’ lacquer offers far more than your conventional pearlescent paintjob, as Jared explains. “If the car’s viewed indoors, it’ll look just like a TVR-style flip paint. Take it outside, though, and the effect is completely different depending on which parts of the bodywork are in direct light and which aren’t.”

Seeing is believing, and the oil-slick effect really is nothing short of mesmerising – seeming to change constantly depending on where the sun is. Topped off with those striking glitter flecks, and this is one paintjob you’re sure not to forget in a hurry.

But that’s not where the exterior tricks finish, as Jared’s also incorporated some equally as impressive hydro-dipped quirks scattered here and there to fully ensure you never mistake this monster for any run-of-the-mill RX. Look closer at those rippling bonnet vents, for example, and you’ll notice that there’s a skull-pattern lurking underneath.

Finished with a glow-in-the-dark paint, he’s even incorporated LED lights to ensure an optimum glow when the lights go out. Where else will you see that?! Peek your head into the engine bay too, and the attention-to-detail on things like the underside of the bonnet really stick in your head for all the right reasons.

Once a ropey white automatic example with a dodgy bonnet stripe, the transformation that Jared’s performed to his faithful sports car from top to bottom over the years is nothing short of inspirational. By remaining loyal and performing regular updates as he goes along, too, he’s managed to keep everyone on their toes during his impressive journey at the same time.

It might not surprise you to hear that plans for the next eagerly anticipated phase are already underway. And they’re sure to blow our minds all over again…

THANKS
Dip Demons in Newton Abbot and Steve Revett for all the engine work.