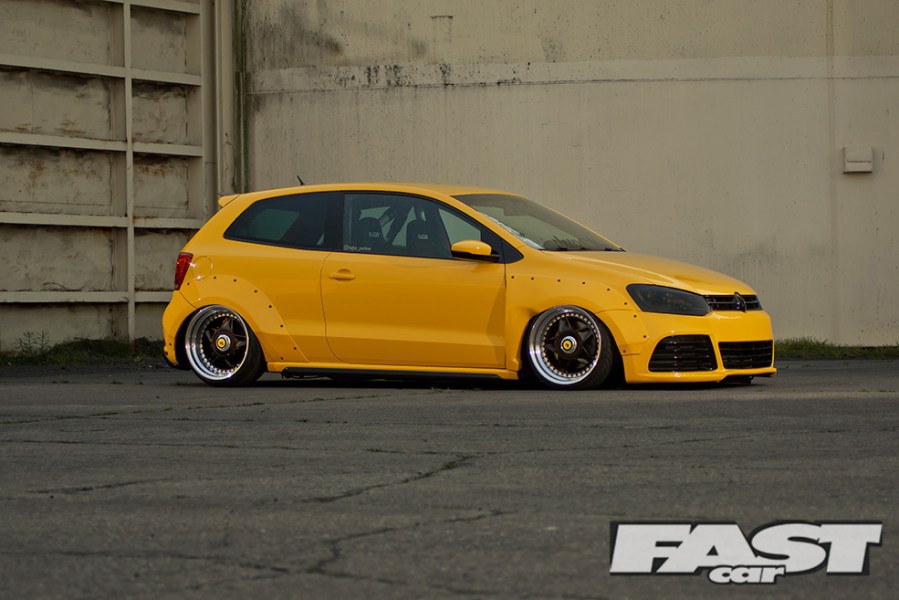 How do you turn an overlooked hot hatch like the Polo into a world-class trailblazer? Well, make it bright yellow, fit a Jem Design wide-arch kit and Ferrari Testarossa wheels of course!

As hot hatches go, the Polo GTI has had a pretty rough ride over the years. Sure, it’s always been a brilliantly capable little pocket-rocket, its owners rarely have a bad word to say about it, the reviews are universally positive, and it’s generally considered to be a solid and decent choice. But the problem is that the Golf GTI also exists.

Poor Polo. It’s like being the Gallagher brother that wasn’t in Oasis. Yeah, he may be brilliant at whatever it is he does, but he didn’t play a record-breaking gig at Knebworth. He didn’t play on Supersonic. He just happens to share the same DNA. Paul who?

This is a shame, as the Mk5 Polo GTI is a particularly clever little device. It has a 1.4-litre engine, but don’t let that put you off because it’s twin-charged. That’s right, it’s got a turbo and a supercharger, like an old Group B Delta S4, which provides ultimate pub bragging rights, along with a handy 180bhp in standard form. It also has a super-slick, seven-speed, twin-clutch DSG gearbox, which is such a brainy unit we’ve invited it onto our pub quiz team. And according to some grown-up road testers we know, the peachy Polo is a car to be applauded for its tight body control, confidence-inspiring brakes and progressive, linear power delivery.

We, however, are only pretending to be grown-ups, and we admire the Polo for its perky tuning potential. Its easy to pull horses out of the VAG and, given that every man and his dog has been favouring the bigger-brother Golf for aeons, modified Polos are always sure to draw a crowd. Particularly if you go hilariously mental with it, like Sandro Syx has done with this yellow fruitloop.

What Sandro’s done, in essence, is to take the Polo GTI’s terrier-like nature and bulldog it up a bit. It’s no longer a pestering upstart, but a growling menace, that now prowls through its Belgian hometown of Gent with a confrontational stance from its look-at me banana vinyl.

Amusingly, Sandro’s day job is as an Opel mechanic, although quite what his employers make of his VW proclivities isn’t recorded. When quizzed on this, he merely tells us: “My first car was a Polo, but it wasn’t fast enough, so now I have this one.” Fair enough. Can’t really argue with that.

“You always see Golfs at shows,” he continues. “Golfs, Golfs, Golfs, it’s boring – it’s time to do something else. I really love the shape of the Polo, and I had to turn it into something outrageous because stock is dull.” Again, that’s totally fair enough. And now, if you’ll indulge us for a moment, we’d like you to pop your phones out and type ‘wide-arch Polo’ into Google Images.

See? Not many, are there? It’s mostly Mk3s with the stock arches flared out, or Mk2 Coupés with universal plastic bolt-ons. But what Sandro’s got going on here is an entirely different kettle of Flemish waterzooi altogether: this wide-arch kit came from renowned Belgian nut jobs Jem Design, and it slots neatly into the whole Rocket Bunny/Liberty Walk trend by fattening up the slender hatchback profi le exponentially. Just look at how wide the damn thing is from dead-on at the rear! It’s genuinely scary. What an aggressive little machine.

“The car was with Jem Design for around four months, ensuring the widebody conversion was all perfect,” Sandro explains. “Then it was wrapped in yellow, because my girlfriend used to have a yellow Honda and we loved the colour so much that I wanted this car to be the same shade!”

Of course, you can’t just slap a widebody kit onto your car and let that be that – your wheels will be lost, deep inside the stock arches within. You need something a bit broader to fill out the new lines. So how does 10.5 inch of girth tickle your fancy?

“The wheels are from a Ferrari Testarossa,” he grins. “I love the look of them!” Yes, it’s obvious why, and wheel-boasting doesn’t get a lot more pukka than being able to say your rims are from a true-blue redhead supercar. And whoever thought of running 10.5-inch-wide wheels on a Volkswagen Polo? It’s so obscene, it beggars belief.

A lot of thought has gone into making the thing sit properly too. You may well have spotted that a lot of cars on the scene originate from this corner of Europe are wearing the Kean Suspensions badge-of-honour, and there’s a good reason for this: Kean are pretty much the daddies of Western Europe when it comes to engineering modified cars to go ‘pssssht pssssht’ and hop up and down at will. The company name is actually a portmanteau of its founders’ names, Kenny and Andy, and over the years they’ve become legends. ‘Go wide, go low’ is their mantra, so it was only logical that they’d be the lads to call when Sandro wanted to get his Polo better acquainted with terra firma.

Now, this Polo may be quicker than his old one, but that doesn’t mean Sandro didn’t see the potential. 180bhp is nice, but more is, well, more. So that brainiac twin-charged powerplant is now rocking a Milltek downpipe and exhaust system, a racier intake and a forthright remap, and the DSG software’s also been tweaked to be more aggressive. The net result is 235bhp and whipcrack shifts, which is more than enough to keep this Belgian whippersnapper entertained.

“It’s not a daily driver. I have a van now,” he explains. “Which means I can make plans for the Polo! I’m looking into a bigger turbo, bigger injectors, different pistons, a bigger intercooler, and it’ll be a different colour next year too.”

Suffice to say, he’s having bags of fun with it. C’mon, how could you not? “I just love it. It’s small and it goes like a rocket!” Sandro laughs. “People tend to either love it or hate it, but they never expect it to be so fast and so loud. And of course, being a widebody blows people’s minds. Nobody’s crazy enough to make a widebody Polo.”

This is indisputably true. And yet, here it is before you, belligerently headbutting its way into existence in a furious smear of banana yellow. It may have started as the third Gallagher. But it’s angrily elbowed Noel and Liam out of the way and now it’s properly spoiling for a rumble. We suggest you stand back.

THANKS
Thanks to Kean Suspensions for the suspension and tyres; Arthur for wrapping the car; Jem Design for fitting and modifying the bodykit; and my friends at Low House for all the help and support.