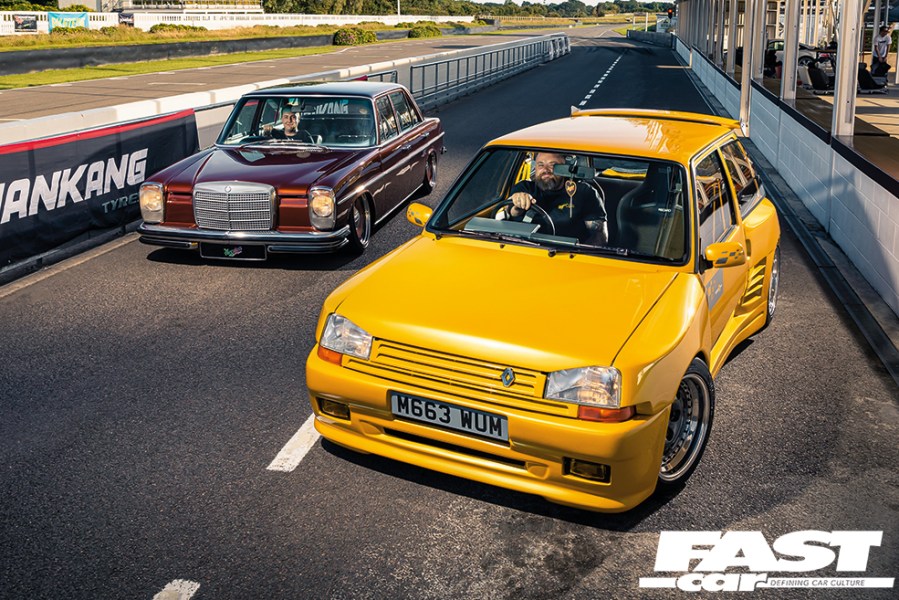 Meguiar’s has been keeping rides pristine for generations, but did you know they can produce builds like this? We take a look back at Tom V Dale 2019, AKA, Renault 5 GT Turbo and 1971 Mercedes W115.

A professional rivalry is always healthy in the workplace. This is true of any job – salesman vie for supremacy on the monthly targets chart, racing drivers need to earn more points than their teammates, politicians endeavour to accrue the largest and most spurious expense accounts, advertising execs battle it out to see who can have the longest lunches… and at Meguiar’s UK, the rivalry is rooted in who can build the coolest car. 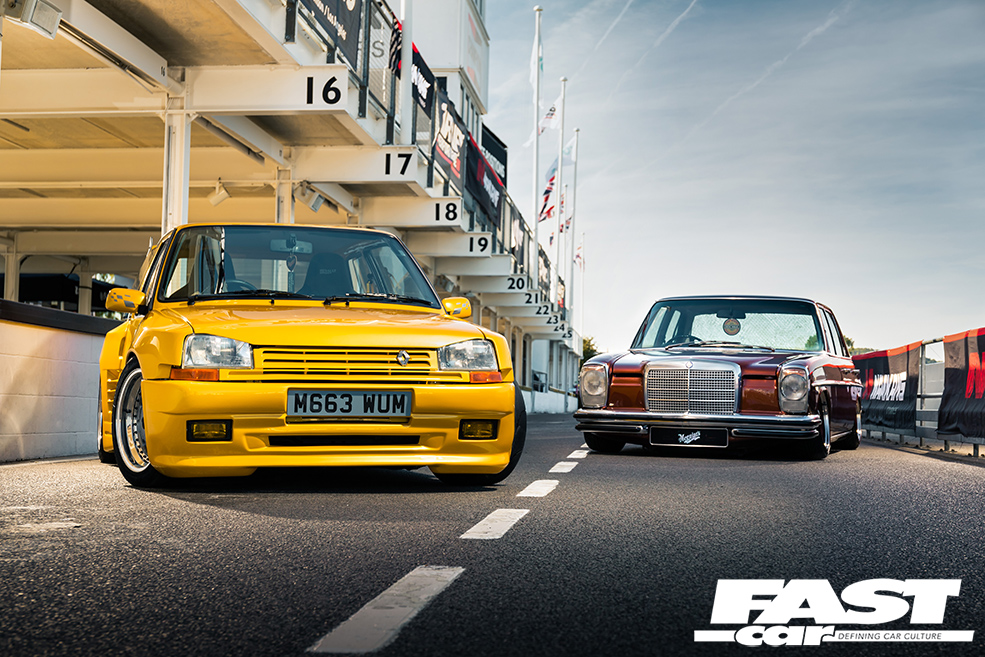 What’s that now? Don’t they clean them rather than build them? Ah, dear reader, these people are polymaths; they don’t just work in the job they do because they’re passionate about beading and foam concentrations (although that is of course also true). These are car guys through and through, born petrolheads, they just can’t help themselves. You probably spotted that we chronicled the Tom v Dale build in our Fast Projects pages a couple of years back and when the covers came off at Goodwood, the crowds were uniformly agog at the respective splendours that greeted them. These cars aren’t just good considering the time constraints – they’re world-class builds by any measure. Not merely thrown together to meet a high-pressure deadline in the media spotlight, each one has been built properly to add something unique to their disparate genres.

‘Disparate’ is a concept we really need to focus on, in fact, because traditionally when we shoot two cars together, there’s a clear link between them – it might be a pair of similar cars built by father and son, or a couple of mates who have different ideas about how to approach the same car, or two spec variants owned by the same person who just couldn’t choose between them. But a 1971 Merc and a 1995 Renault 5 GT Turbo? They don’t have anything in common, do they?

Well, yes, actually – they share two important things. Firstly, you want them both. Admit it, you just do. And secondly, Tom and Dale chose these cars because they’d been wanting to build them for years. And that’s essentially why we do what we do, is it not? This passion, it’s always growing. 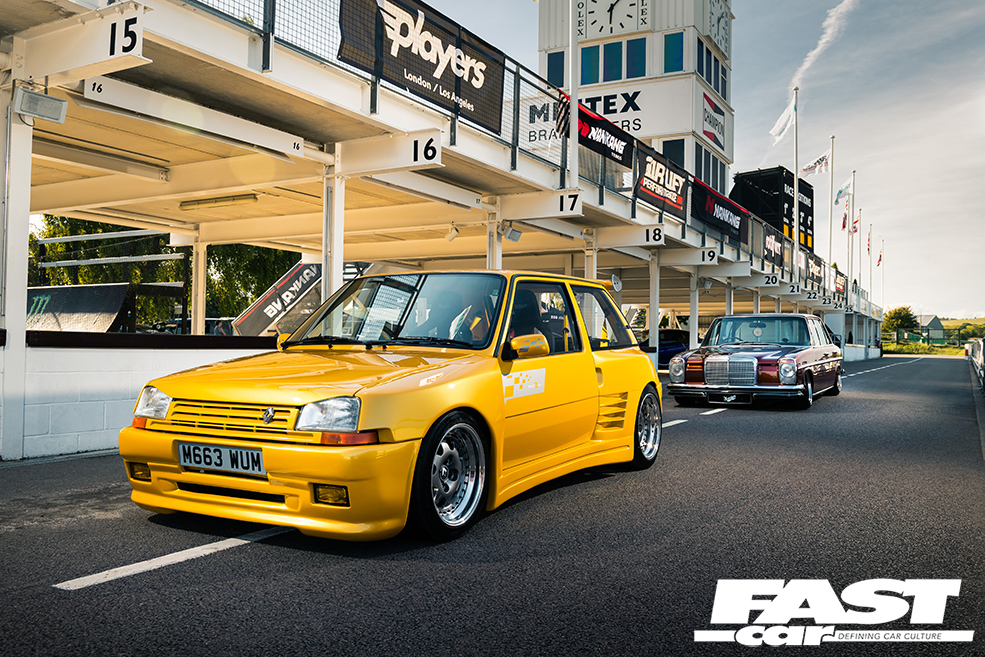 Let’s start with the Renault 5 GT Turbo, then. Now, the fun part here is that it really works on two levels: on the surface, it’s a GT Turbo, finished in yellow, to deliberately provoke onlookers into making kneejerk Ali G jokes. You did it, didn’t you? As soon as you saw it, that voice in your head started saying ‘R-E-S-P-E-C-T!’. But there’s a deeper level to this. Tom wanted to create something with a knowing nod to the RS hardcore – that’s why he opted to paint it in modern Renaultsport Liquid Yellow, and add the Clio RS 200 spoiler, it’s the sort of GT Turbo that Renault would build if the car was still in production today. 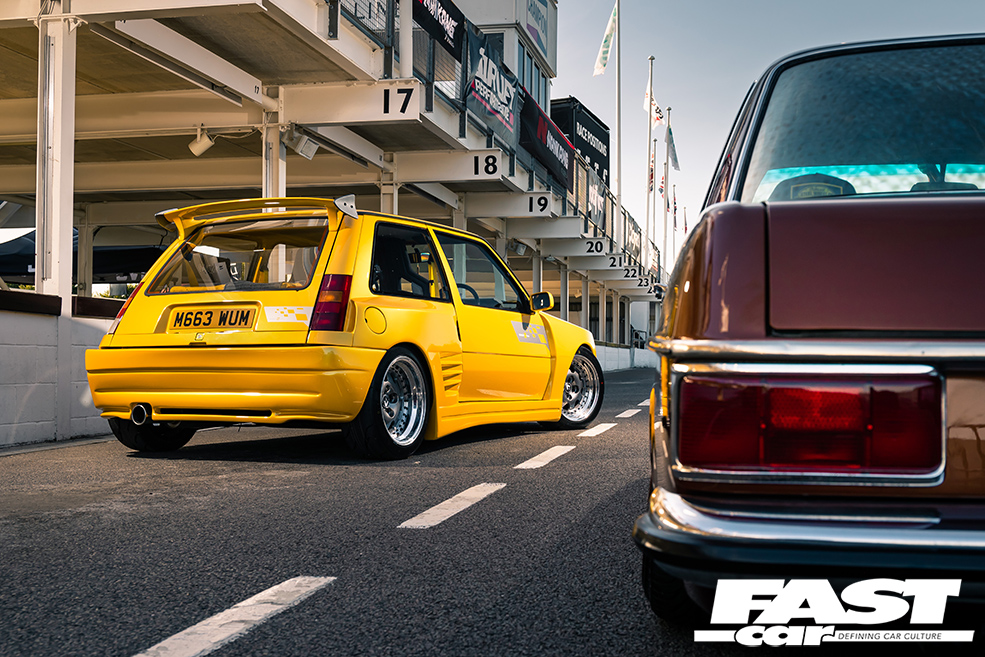 “My first and second cars were Renault 5s, and I’d always had an itch to build one properly,” Tom explains. “In my search to find a decent base for this project, this car turned up on eBay. It was poorly, but at the price I thought it was worth the chance to start a cool project. How wrong I was!” What arrived on the trailer was a mint green period survivor, resplendent in old-school widebody kit and… a few surprises hidden underneath. It wasn’t just owners winding up the boost that killed these cars, they do like to rot pretty enthusiastically too. But Tom’s not the doomy type. He simply rolled up his sleeves, made a few phone calls, and got stuck in.

“I was originally going to restore one back to factory, but when this car came up my ’90s boy racer came flooding back,” he laughs. “It would have been easy to ‘Ali G’ the car, but I feared doing that would have been short-term cool, and I wanted something that would be a proper car for years to come.” As such, this has been done right, and the spec is formidable. That turbocharged Cléon motor has been fully rebuilt by Prep’N’Lay, and features a whole host of goodies from Forge Motorsport including a custom hose kit, actuator, dump valve, intercooler and header tank – all in black, for reasons of stealth and subtlety. Rather less subtle are the staggered Dimma 3-piece wheels, which have been artfully rejuvenated by The Wheel Specialist, Fareham, and that on-point retro stance is attributable to a set of custom Bilstein B14 coilovers. With a fully refreshed chassis and brakes uprated by EBC, the final flourish was the interior: Campus-spec trim was chosen to accentuate the 3-stage pearl, with the bare-bones dash and doorcards complemented by a rather more ostentatious pair of Renaultsport Recaro CS front seats. The rear bench is trimmed to match, and there are yellow Renaultsport seatbelts, because of course there are. 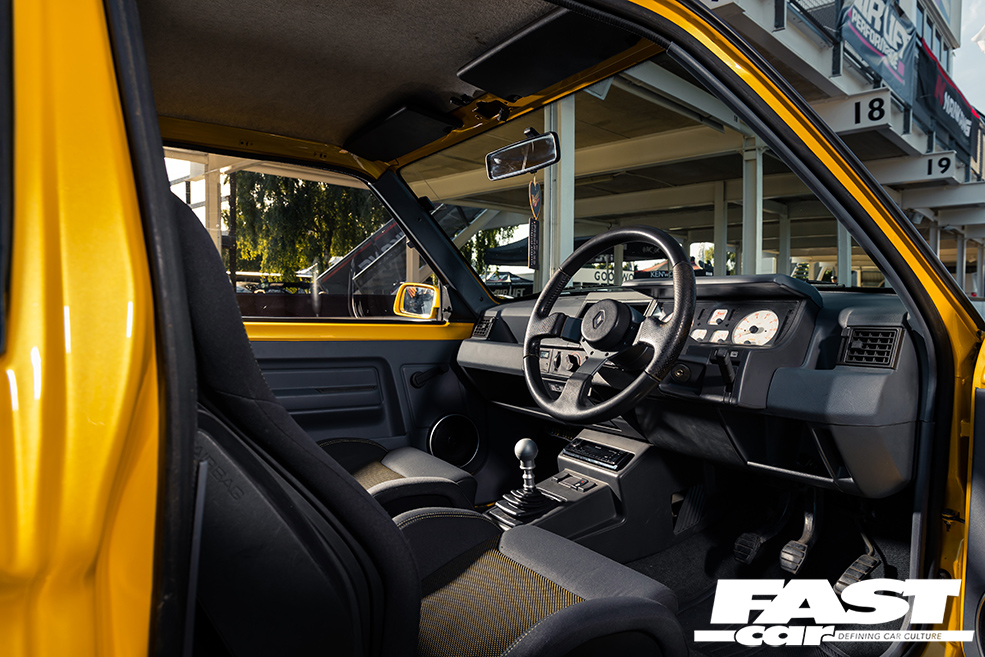 Lurking malevolently on the other side of the Goodwood pitlane is a machine with an entirely different focus. A million miles from the car park burnouts of Tom’s 1990s hooligan is Dale’s low-and-slow stacklight Merc, a panscraping W115 that channels memories of the Chicano lowrider culture of LA and cleverly teleports it to this leafy corner of West Sussex. It hard-parks itself on bags rather than hydros, it’s wearing big-ass steels instead of chrome wires, but this modern interpretation of lowrider culture is right where we wanna be. 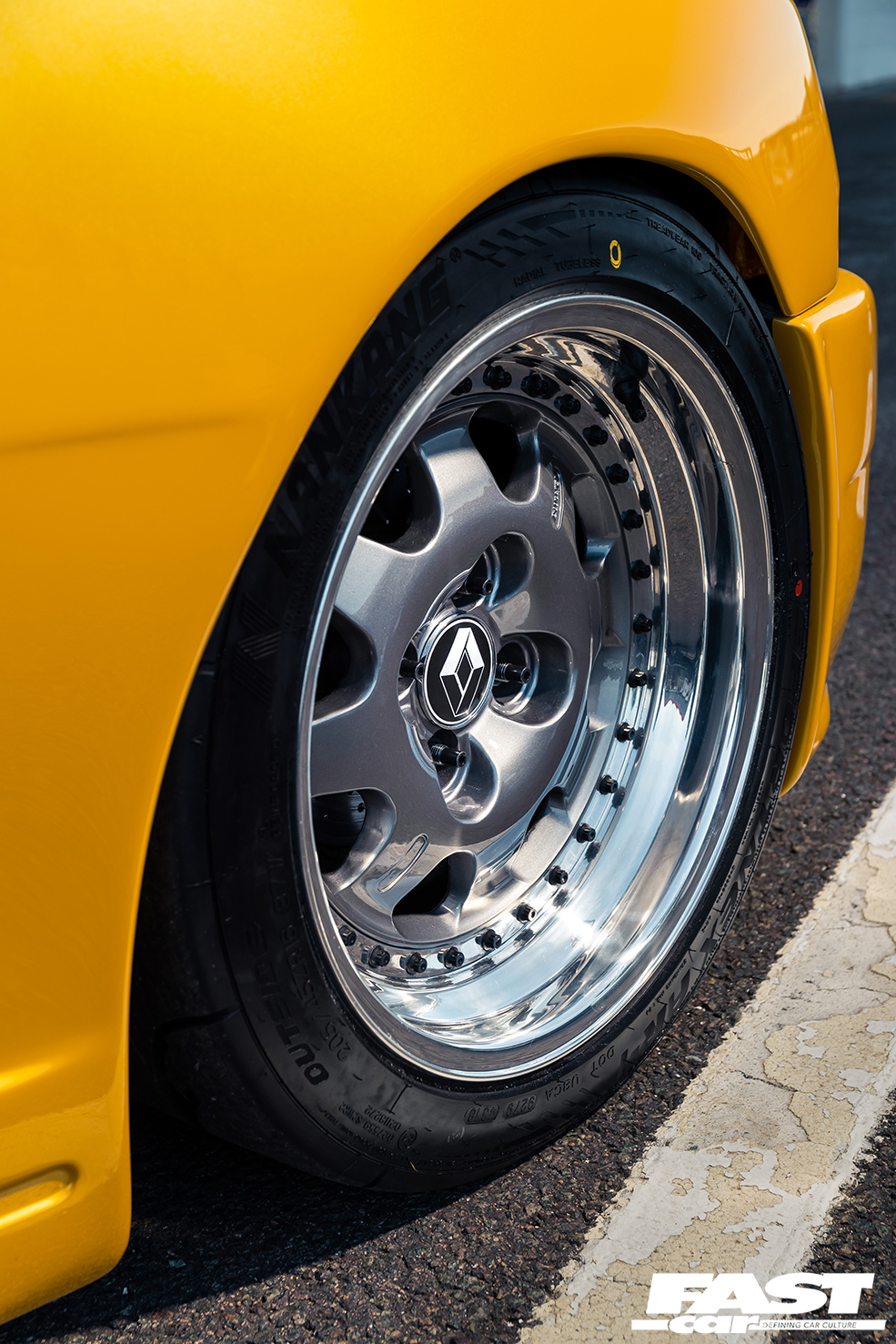 “I’ve had this car in my head for years,” Dale grins. “I have a huge passion for American car culture, and always thought the W115 could look like a Continental’s European cousin.” This particular car was found at the legendary Paint Box paint shop down in Essex, where one of the guys was using it as a daily driver so Dale knew he’d be off to a headstart. 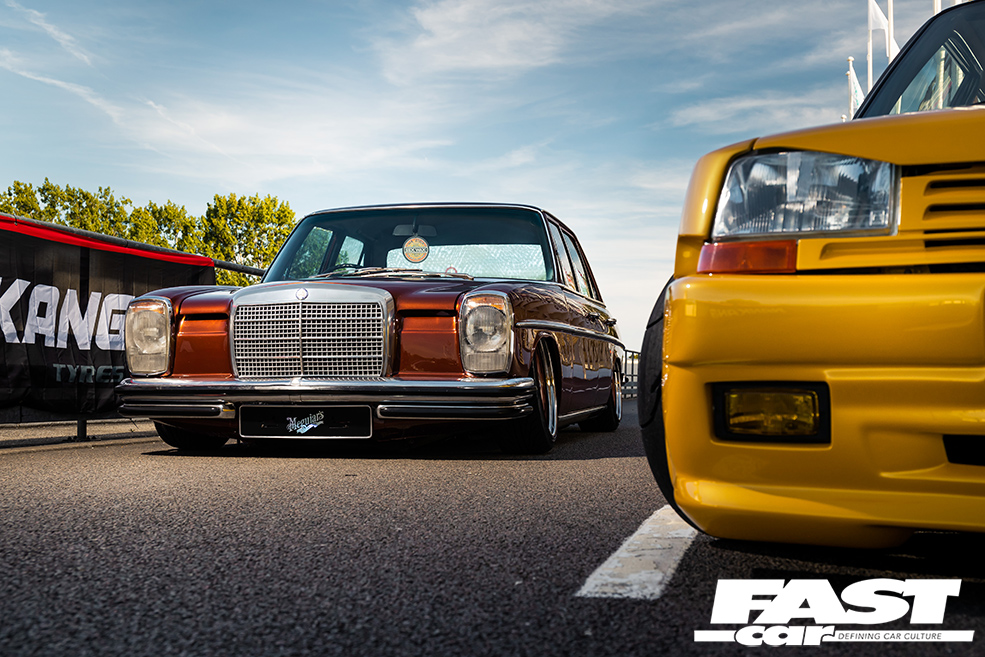 “It was the fourth or fifth car that we looked at,” he recalls. “Knowing the car was coming from such a creative hub made it irresistible to pass up. And when I saw it, I knew it was the one… plus it was already lowered so it looked cool on the way home!”

Naturally there’s low and then there’s lowrider-low, but helpfully Dale had his gameplan all in place and a lot of associated talent to draw on. “Like any build, I had an overall image in my head,” he says, “I looked at old 1970s magazines, listened to a lot of blues, funk and soul, and talked to my dad about car culture in the ’70s. I worked very closely with Colin Ware at Kustom Kolors and Phil James at The Install Company to map out how the car would be executed; this included measuring out the perfect size and fitment for the air and wheels, picking the perfect colour and effect for the roof, and making small changes that would make the Merc different from the others.” 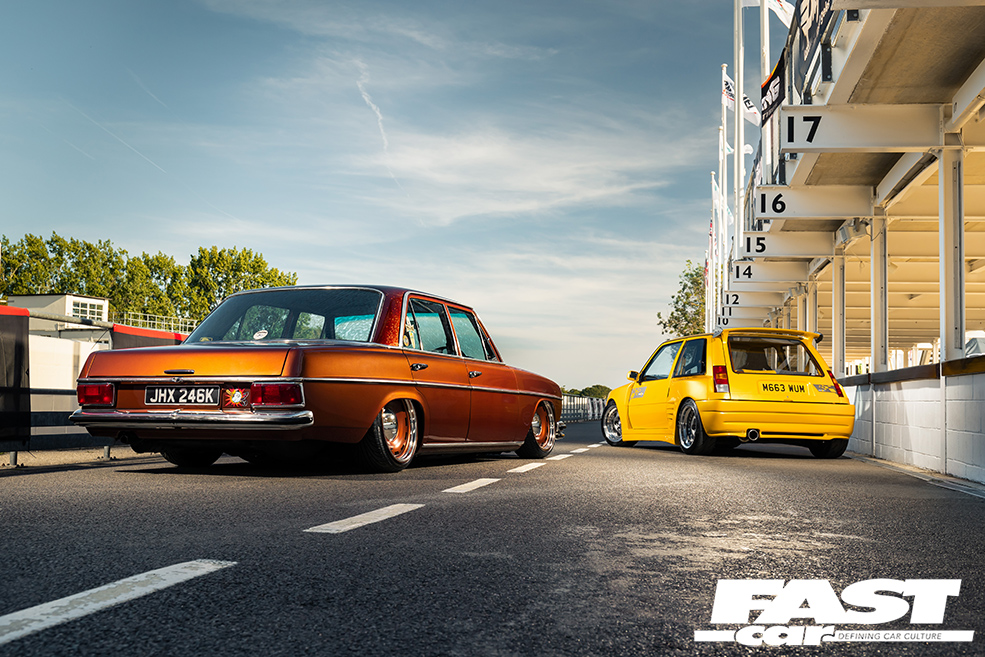 The paint, as with any classic Chicano hopper, is the build’s crowning glory: the body wears a shade called Copper Sunset which pops beautifully in the light, while the roof sports all of the visual tricks of the genre – metalflake, candy, lace, you name it. A double-bumper upgrade adds a touch of the premium, and the body enjoys just enough custom touches to make it Dale’s own: a grille emblem delete, candy red taillights, mirror delete, it’s all in the details.

Inside you’ll find the original seats, but they’ve been beautifully updated. Cobra Seats worked with Edd Aldridge to retrim them in modern/vintage Forest Green in the old-school ‘fat biscuit’ style. A full audio install from JVC has been hidden where you can’t see it, and the crowning flourish is a Mooneyes foot pedal donated by Dale’s dad. 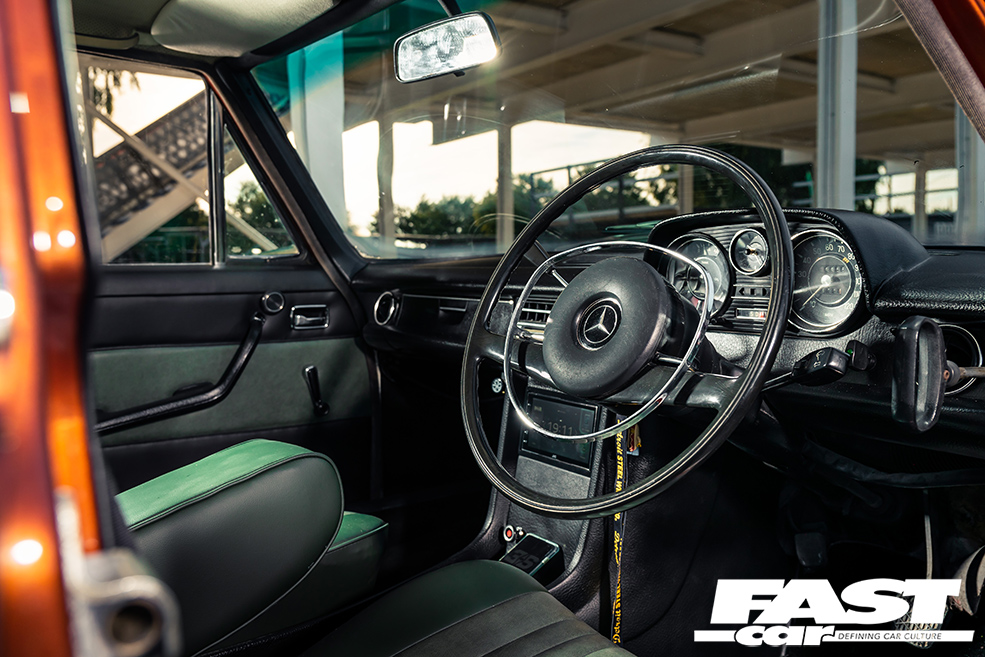 “The engine’s the standard two-litre with a three-speed auto, so yes – it’s pretty slow,” he laughs. But that’s really the point of lowriders, they’re built for flexing and peacocking, not seafront street-racing. If you want that sort of mischief, flick your eyes back to the Liquid Yellow Renault.

What was the most stressful part of the Renault 5 GT Turbo build? “All of it,” Tom smirks. But what’s his favourite bit now it’s finished? Again, “All of it,” is the answer. “I’m so happy with how the whole look has turned out, like what it would be if Renault made a GT Turbo today.” 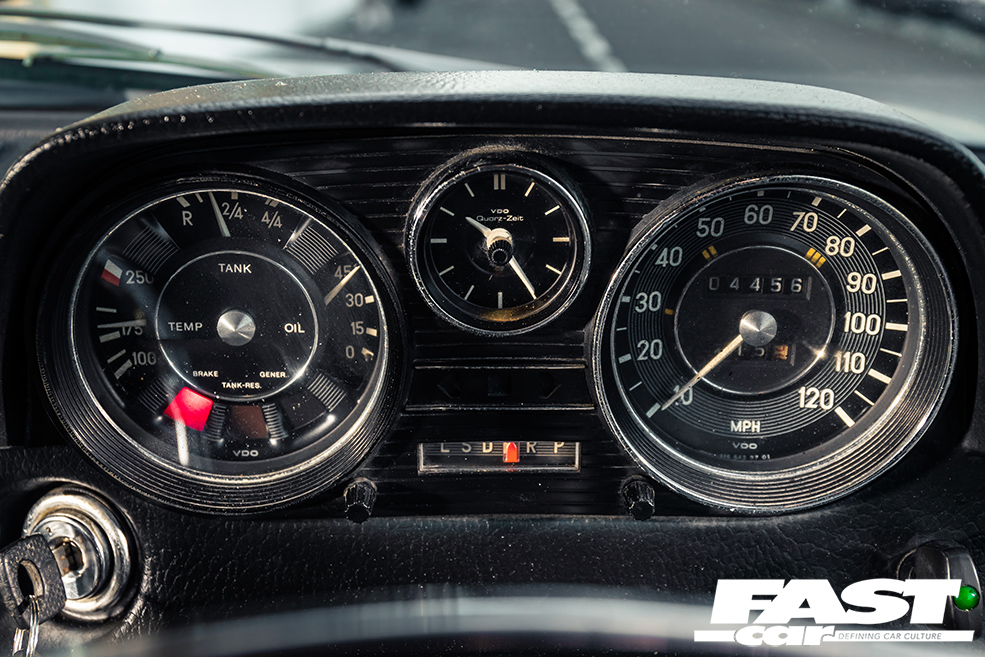 Dale is equally effusive about the Merc: “The response at the show was amazing, there was always someone walking around it and having a good look at all the details… and touching the paint!” he laughs.

These beautiful machines have been built to last, and Tom and Dale can’t wait to head out on some adventures with their shiny new creations. “I’m going to drive the Merc as much as possible, cruising around with my partner Amy,” Dale assures us. “And I’d like to complete the Clio theme and install a 182 engine,” smirks Tom. And we have to applaud both approaches. It’s been a hell of a journey to see these diverse and scene-altering cars come together, but for these boys the adventure’s really only just beginning. 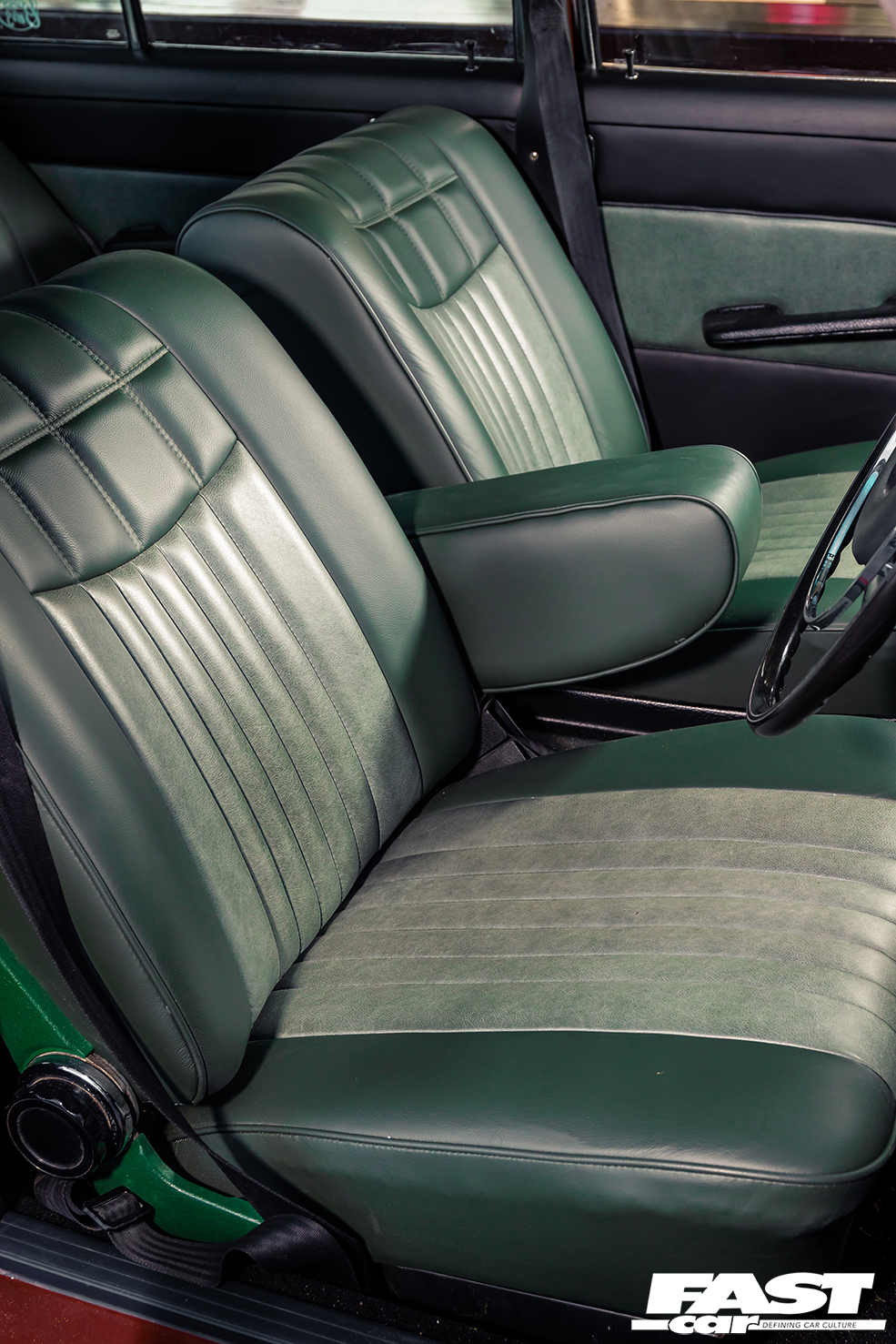 Thanks:
“Thanks to Meguiar’s UK, Reflex Auto Design for all the work and total, final build, Bilstein, EBC brakes, Powerflex, Forge Motorsport, MMR Performance, Nankang Tyres, The Wheel Specialist – Fareham, Garage Midnight, Pipercross Filters, Dave the Trimmer, Kenwood, Raptor Paints, Syco Graphics, Russell for the engine build, Bobby for the wiring, Vick for help with the wheel building, Matt at Reflex for giving his life away to build the car, Aaron and Glen for the most important purchase/gift: Haynes manual, Mike at GT Turbo Spares, and Chris at Urban Composites.”