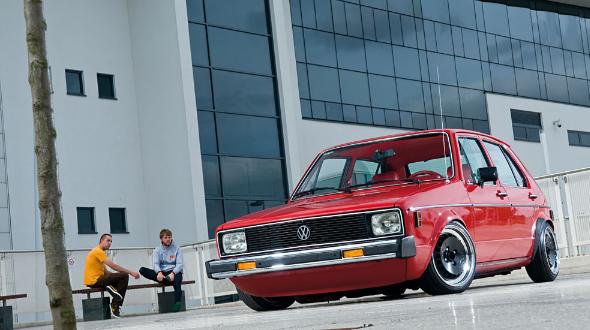 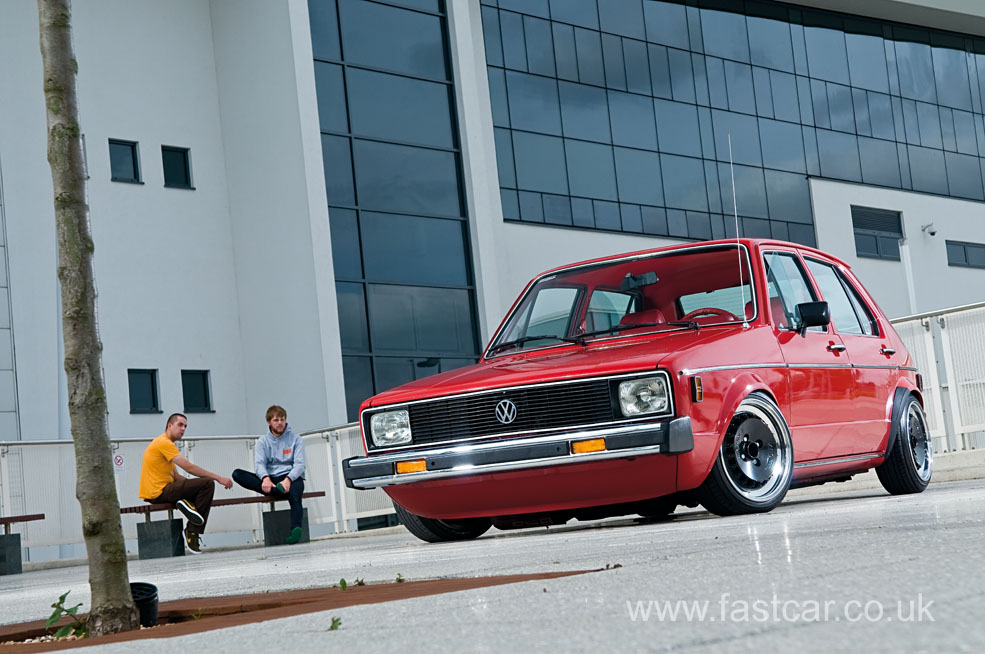 The Euro kids want stateside parts; the stateside kids want Euro parts. It’s like a secondary school exchange programme only with cool kids, fewer illicit substances and no suspect translation of foreign expletives. The other notable difference is you lot actually want to take part in this cultural exchange: licence plate surrounds, bumpers, side repeaters, lights, hell… the list goes on. In fact one particular contact of FC recently asked us to get a price for Audi TT Cabrio parts with euro-specific part numbers because, “You guys have got the cool stuff.” 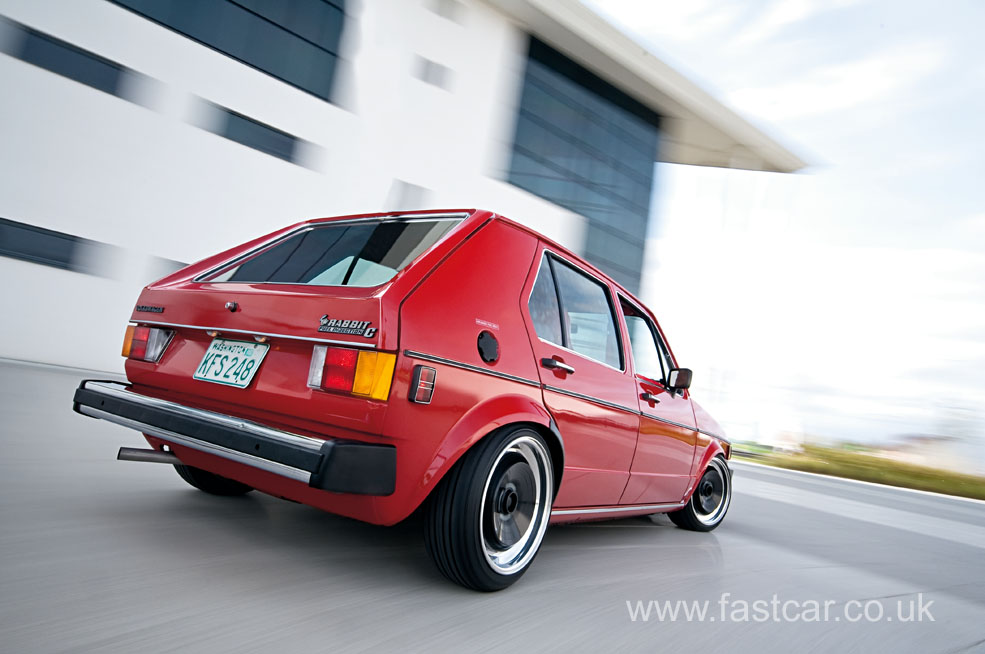 That’s a sentiment now heavily echoed this side of the Atlantic. You’ve only got to catch a glimpse of 22-yearold William Smith’s recently imported Mk.1 Golf to see what it’s all about. “I was building a Mk.2 Golf that I converted to run a Syncro drive-train. I bought a Nevada Beige three door shell that turned out to be rotten – which I then spent two years working on,” Will explains. “Then one fatal day I saw the Rabbit for sale on the VW Vortex forum and knew I had to have it. I started selling all of my Mk2 parts and was on the phone to Erik, the car’s owner in the States, constantly bugging him.” 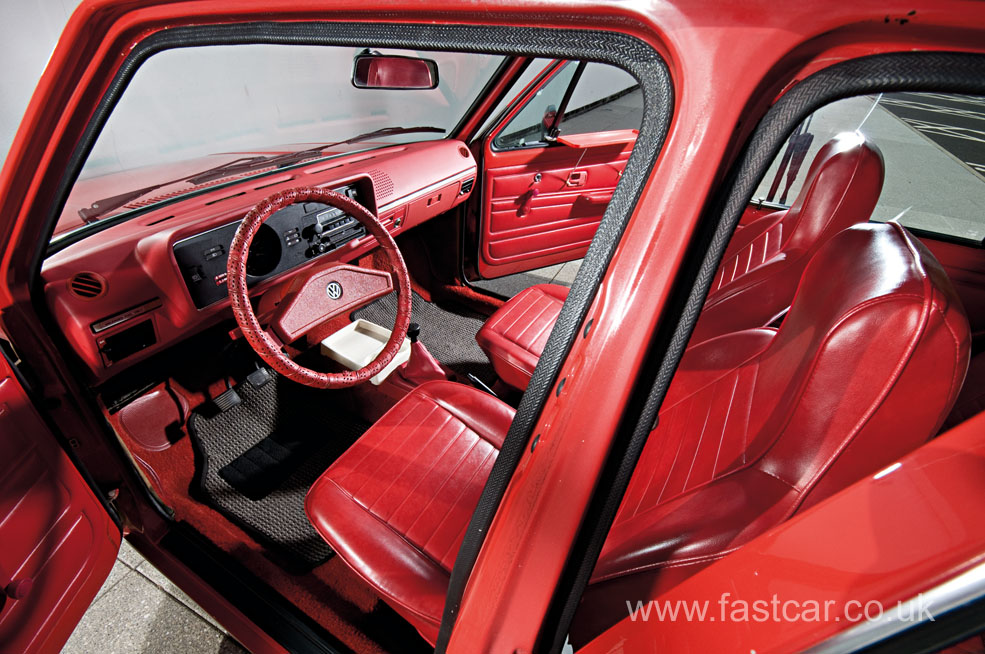 It turns out the car’s first owner, a lady by the name of Denise, bought the car new in 1980. She moved to China shortly afterwards and left it with her Ma and Pa on Mercer Island in Washington. Luckily they couldn’t drive a stick shift, so it sat taking it steady. 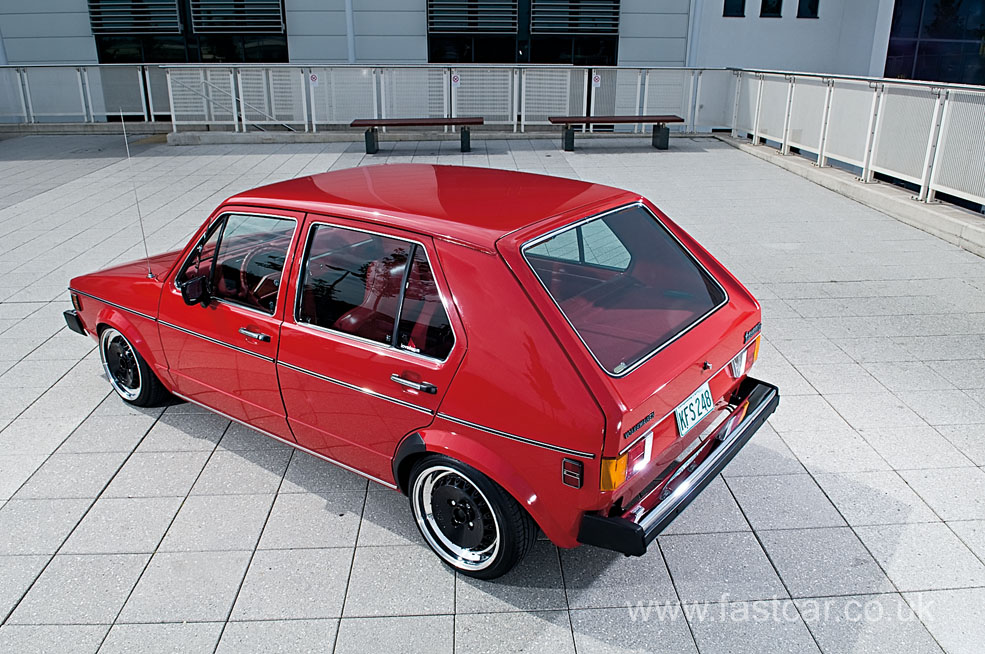 Ten years later Denise returned and used it to go get the groceries once a week. “It was a bit stressful getting it here and it emptied my bank account more than I expected, but without Erik’s help this would not have been do-able at all.” 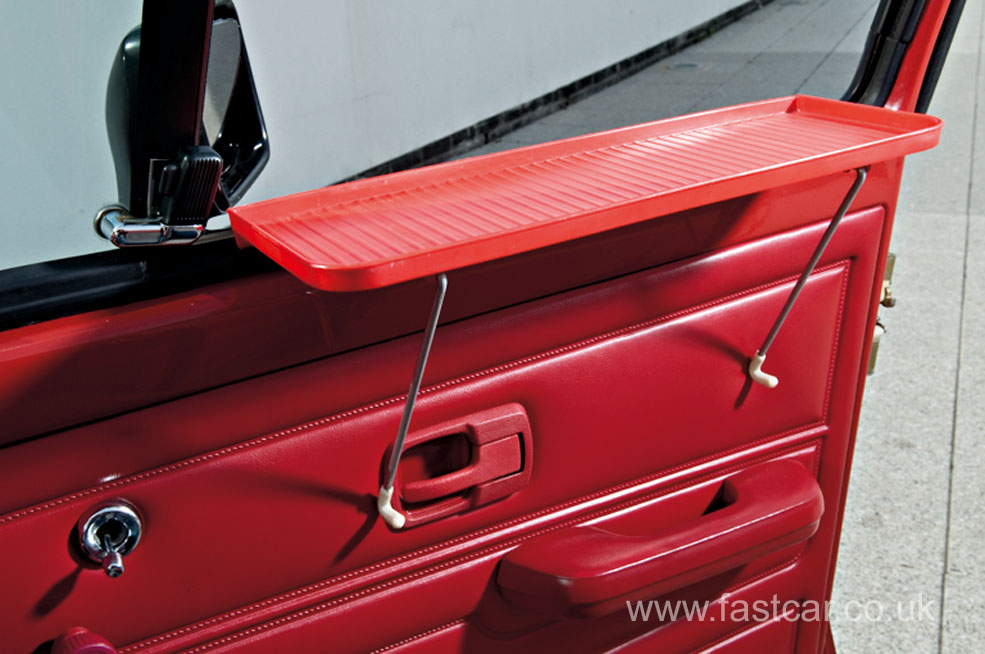 After £1200 shipping, 30% duty and the cost of the car, it arrived at the docks with a miniscule 12,261 miles on the clock and was pretty much as you see now. The square lamped Westmoreland (a VW factory in Pennsylvania) front end, chunky 5mph chrome bumpers with overriders and the wing mounted side repeaters were all in the house. Will’s the first to admit that it needed a freshen up. 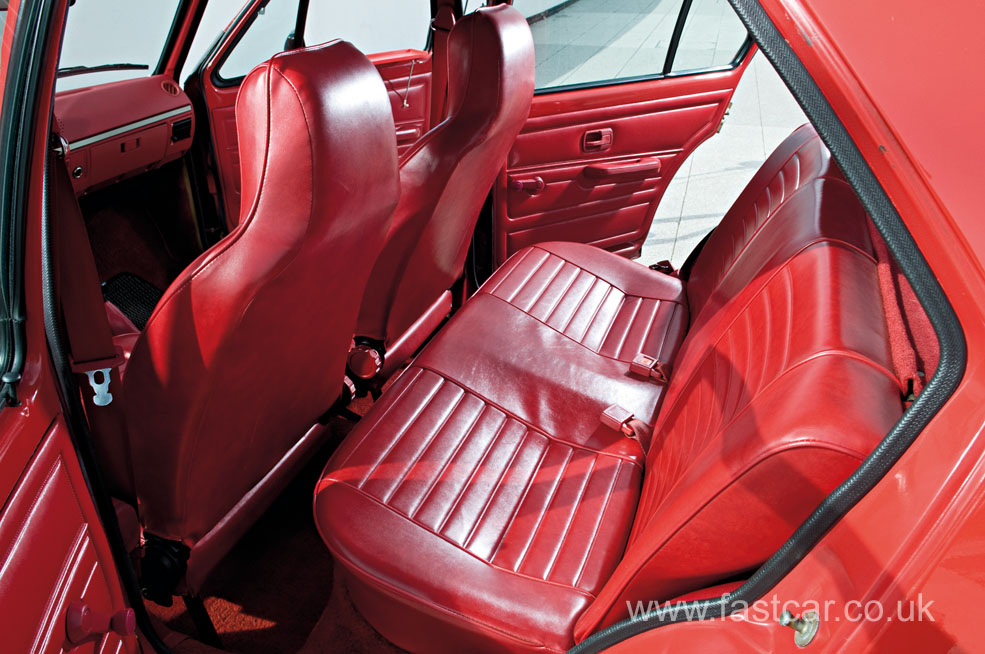 A healthy dose of slamming thanks to some FK Konigsport height- and damping-adjustable coilovers, which benefit from Koni inserts, and some increasingly hard-to-find 7×15 Ronal Racing magnesium three-piece split rims soon followed, once Will had them welded and re-drilled from a Jap fitment to a VW-friendly 4×100 PCD. New-old stock parts like the rubbing strips, arch spats and even interior drinks trays have been sourced from his new-found stateside contacts. Will also had a bit of trouble sourcing and swapping the headlights for MoT purposes. 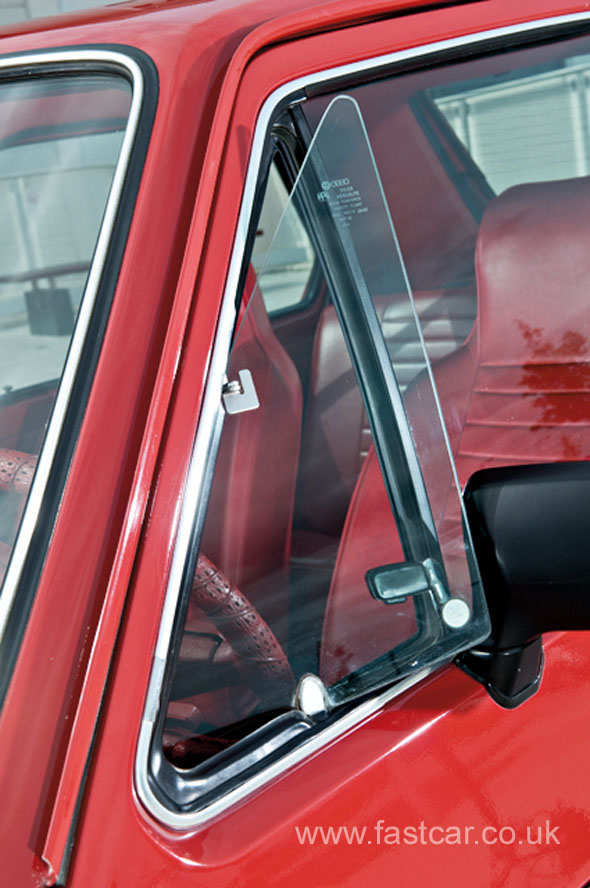 It’s all powered by a de-tuned version of the 1.6-litre fuel-injected K-jet motor, originally fitted to the Mk.1 Golf GTi, so there’s enough grunt to get him about to all the shows without any issues. We bang on about cars with character but the first time you clock this one you’ll know exactly what we mean. 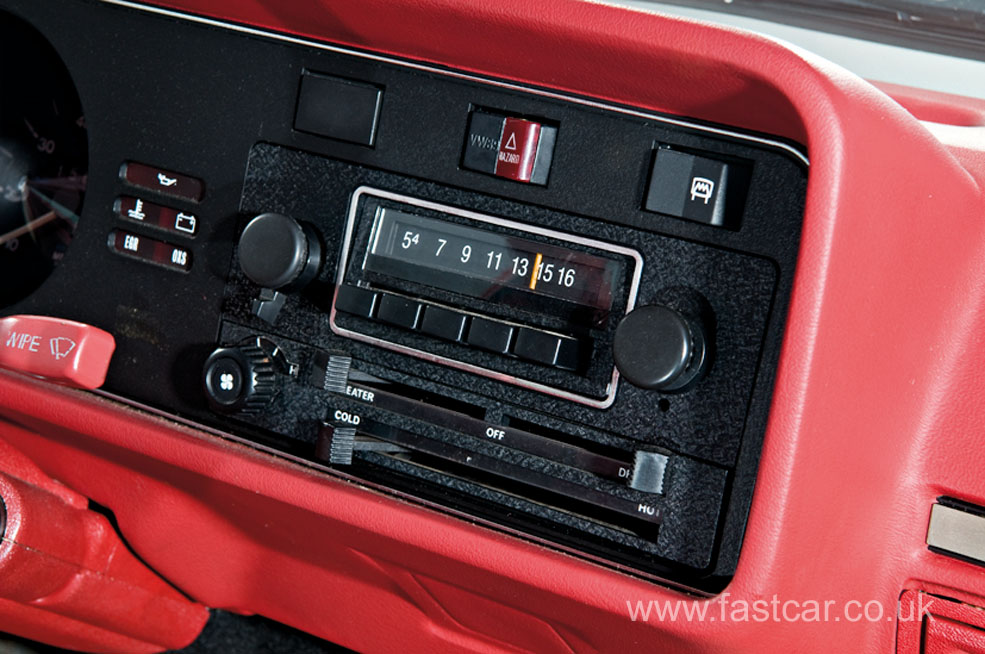 Will has already taken a few prizes home to Yorkshire, and there’s more to come, “I’ve just found a guy in the States with a garage full of mad rare parts and by the time this in print the new BBS Motorsport wheels will also be on it.” Bring it on mate, stateside is de best! 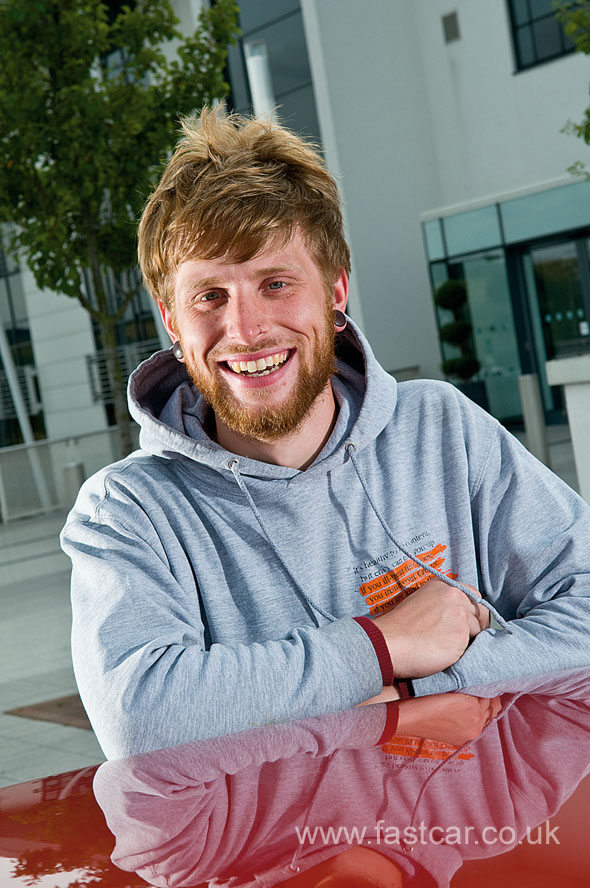 What is a VW Rabbit?
VW branded the Mk.1 Golf as a Rabbit in America because it was small and nippy like a, erm Rabbit. Apart from different bumpers and lights it’s pretty much the same car. In 2006 VW brought back the name and the Mk.5 Golf was once again branded the Rabbit in the states.