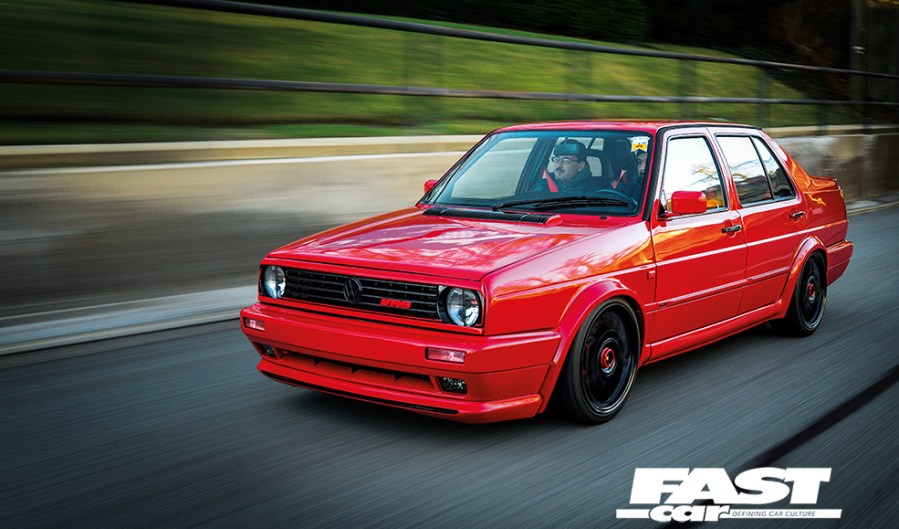 What do you remember most about the 90’s? We know it was a good time! Lairy clothes, iconic movies, loud music, and iconic cars! The “Back in the Day” saying is what brings us to the ride you see here. Let’s take a trip back, way back in time, to explore the tuned VW Jetta VR6 Roberto Gonzalez has built!

The man is a product of the “old school”. Hip hop, retro sneakers and classic cars. He is a member of the old head car crew, Jersey Hooligans. Nicknamed “Super Homie”, he is one of those guys who will sit back from the spotlight but knows what’s good and what’s not. A master technician by trade and a father, brother, and friend, by nature. Some of you may remember a venerable tuning shop, that was a name to be reckoned with in the 90’s and 2000s – Kaz-Tech. This shop spat out Mk2 VR6s with all the trimmings, on the regular. Roberto lent his expertise there for three years. And when we say expertise, we mean it! This man can carry out a VR6 swap in his sleep… with his hands behind his back. Yes, he’s that good! He’s had VW gear oil in his blood since the beginning, with his first car being a triple black ’82 Cabriolet, which he wishes he still had (We all have that “one” don’t we?). To give you a glimpse into the skill that has earned him the name “the VW whisperer”, Roberto come across a crashed Mk3 VR6 and had the motor swapped into his Jetta in a day! 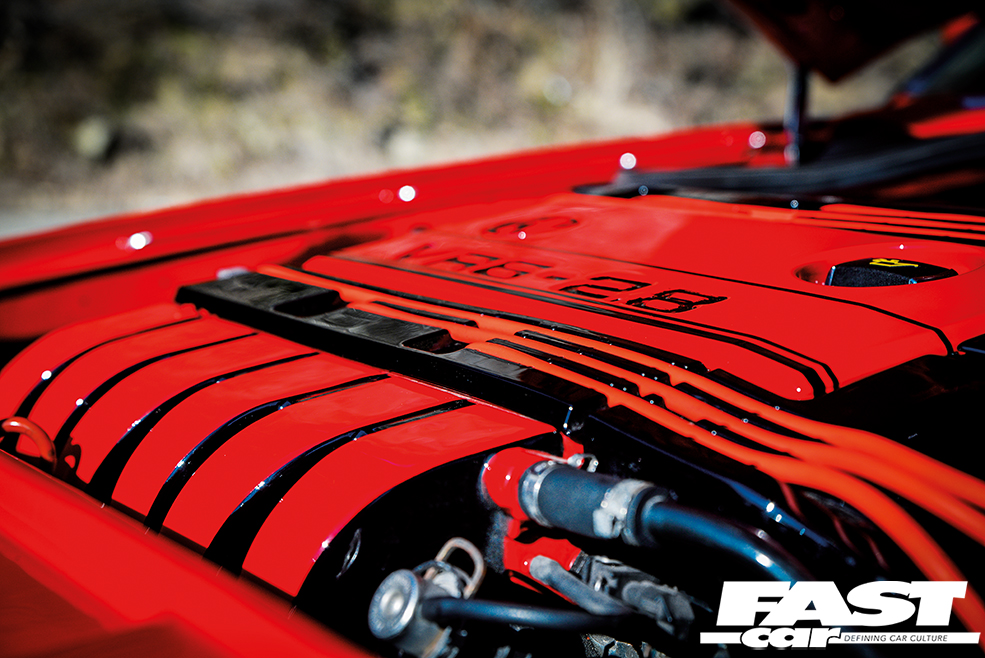 The resulting tuned VW Jetta VR6 you see here actually started life as a 1990 Tornado red GLI and was bought back in 2009. It originally sat in his backyard for years as a backup car. It was never meant to be “built” and was the donor car to another Mk2 Golf project, an original Bright blue metallic VW Golf GTI. Back in 2016 that very Golf GTI was going to be “the one”. Roberto tapped the shoulder of longtime friend and VW head, Joe Valente affectionately known as “the Glassman”, for his ability to expertly paint cars so well, they look like glass! The GTI was in full swing and sadly, even with a VR swap, the Jetta simply sat in his backyard for five years, as a lawn ornament.

With the GTI getting the royal treatment, why would Roberto even give the VW Jetta a second look. Then is happened. After an extensive going over while in prep for paint, it was discovered that the GTI simply had too much rust for his liking and the plan was scrapped. Fast Forward to 2017 and ‘The Glassman’ spotted the GLI sitting at Roberto’s house and said out loud, “This is it!”! It was effectively a clean shelled canvas with not a lot to fix, and it was already a VR6, too. The Jetta was quickly stripped to the bare minimum, to find absolutely no rust. Into the booth it went… 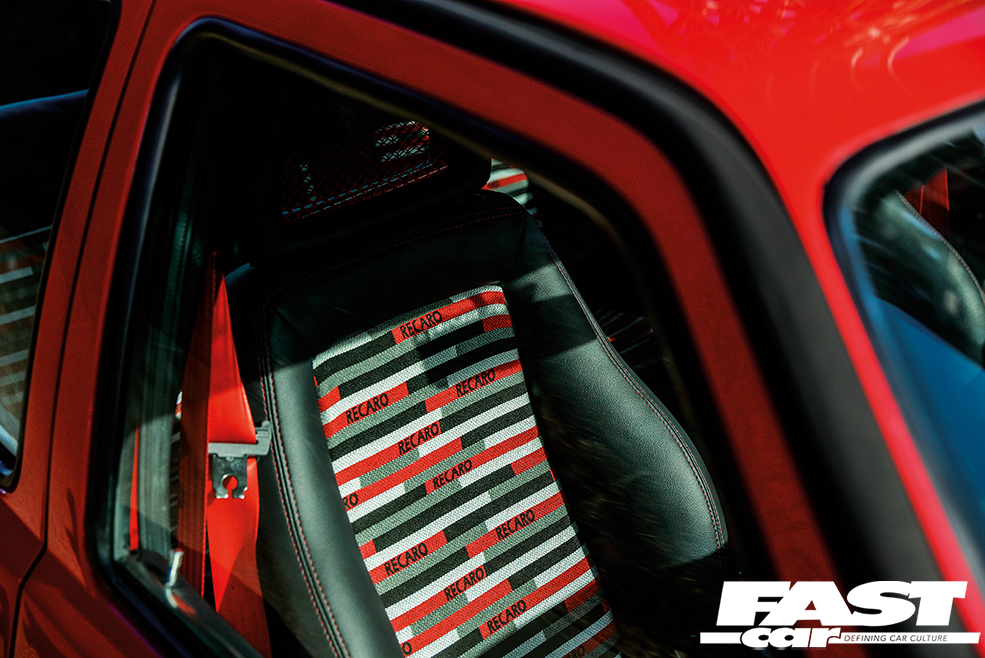 At a local GTG Roberto and Joe came up with the idea of creating a throwback. It was 2018 and “All Red Everything”, was the plan. The funniest part about it, is the fact that Roberto is not the biggest fan of red, but he just so happens to own quite a few red cars! This car though, is a true throwback to the 90’s in every way.

Initially Joe set about the task of smoothing all things previously textured. While everything was being shaved, smoothed, and ground to glass, Roberto was busy rebuilding the VR6 to basically brand new spec. The pressure was on as the deadline was to make it to Dub’s on the Boards, later that fall. Days, nights, and weekends were spent sanding, welding, spraying, wrenching, and repeating. Every nut, bolt, tab, panel on this car was touched. Over the years, Roberto had acquired a lot of parts. Things like the Zender chin spoiler, the Vortex console and the TSWs all sat in the horde! 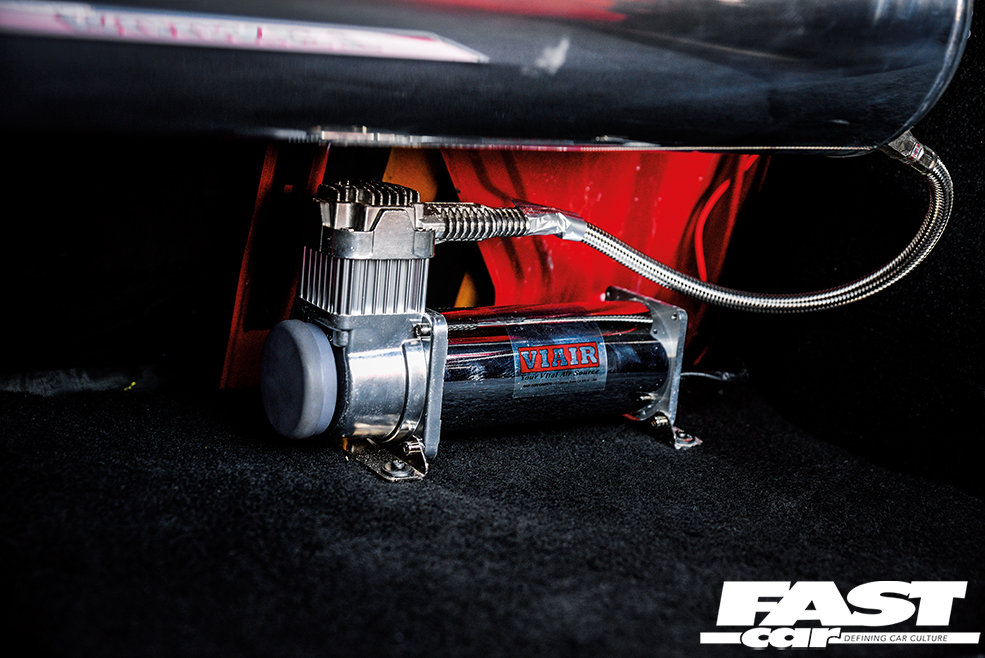 It’s safe to say that with Roberto and Joe on the case the tuned VW Jetta VR6 was completed in record time. Most of us get to this state of a build in a year, maybe even two. This was done in three months! Time, passion, and love. Roberto and Joe like to say, “This was just thrown together!”, but we say it was thrown together with love…

When you look at the car, it screams 90s! In your head, you can hear Wu-Tang playing in the background (Roberto’s favourite hip hop group!) and get visions of old movies like Juice. Well, I do, at least! Take a closer look. Go in deeper. The grille is a smoothed single round Bonrath item, complete with Bonrath eyebrow and a Jetta lower grille blend. Smoked single round headlights with crosshairs, MHW red-tinted turn signals and smoked lower OEM fog lights, complete the menacing look of the front. Open the hood and the engine bay paintwork intricacies have made their way to the VR6 valve cover plastics, intake runners and slam panel. Hand painted pinstripes? Look at the hood. The MetalPlast hood vent cover has been “glassed” and accented with red. The bonnet itself, is held up with a chrome hood prop and hinged in chrome. The Bonrath single wiper catches the eye as well. Move down the body and the bumpers, the flares, side skirts door molding and door handles have all been “glassed” and colour matched. Stop! The side mirror mounts have hand pin-striped surrounds. Most wouldn’t see the fine details, but they are loud and clear. Let’s continue to the rear of the car, where we see the taillights have been accented. The normal black lens separations have been hand painted in red. 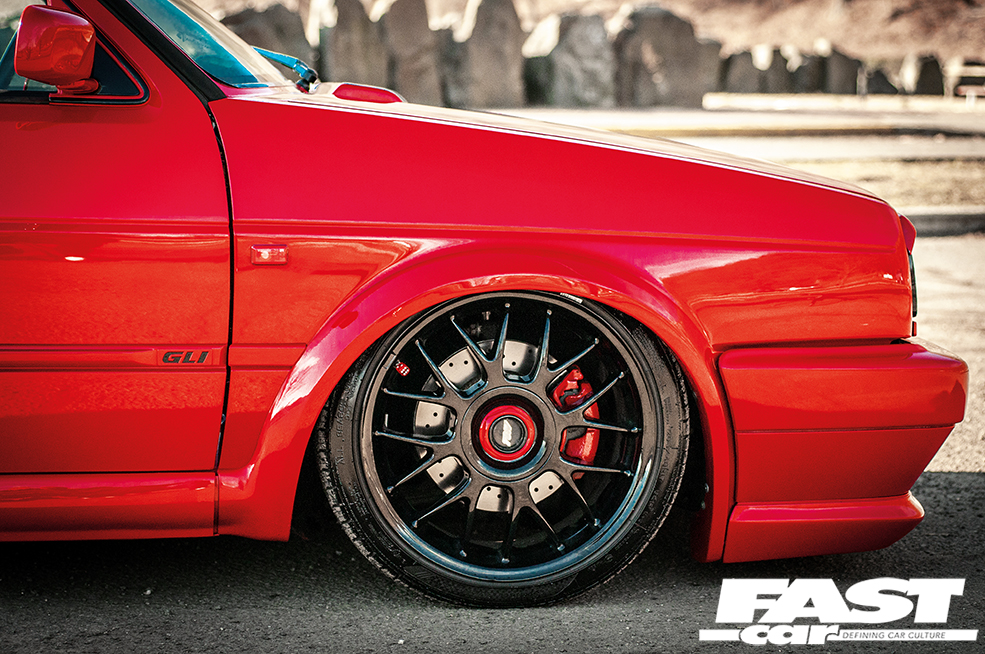 Even the plate surround plinth has been smoothed black with red pin striping accents. The rear is finished off with period correct polished upswept DTM exhaust tips. Let’s pop the trunk. Here you find a freshly polished parcel shelf mounted air tank and a false floor mounted pump that airs up and airs out the Air Lift system to lay the car on the ground, tucking the black powder coated, red centre capped TSW Hockenheim R wheels, completing the 90s theme outside! The battery has been relocated to the trunk (or boot as some like to call it), neatly tucked away to the left.

Next up, let’s slide into the interior. Right away we are blown away by the 90’s BMW 3-series-esque Recaro fabrics flowing from the door panels to the seat centres and then to the handbrake boot! Black bolstered with red stitching; the red fishnet headrests tie it all together with that 80s/90s I-ROC feel! 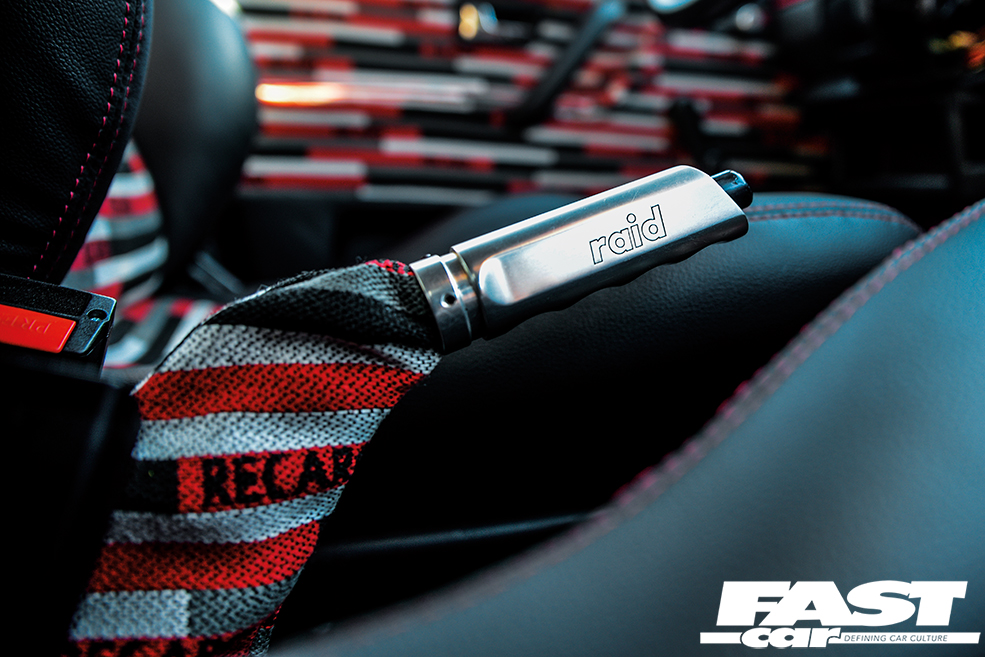 The OEM dash cover flows down into a Votex console housing the gauges for the air ride system and Polo cupholders. An Eclipse cassette deck with matching CD changer and Kicker speakers oversee the sounds! The side of the centre console holds firm the custom switches for the air ride levelling. Then, grab hold of the Votex four-spoke steering wheel and row through the gears holding the polished Kamei weighted shift knob, while pedalling on polished TT pedal covers.

Every inch of this tuned VW Jetta VR6 is a complete time capsule material. You look up at the suede headliner and in any other direction to see that, indeed everything has been gone over with the proverbial, “fine toothed comb”. With the Euro red seat belts all the way to the polished door lock pulls and Raid handbrake handle, its apparent that the attention to detail is far beyond what you’d normally expect. Even the rear parcel shelf’s Boston Acoustics period correct speakers, follow suit with the red and black theme. There are so many wonderfully placed 90s details to this car, that if you don’t pay attention, you’ll miss them. 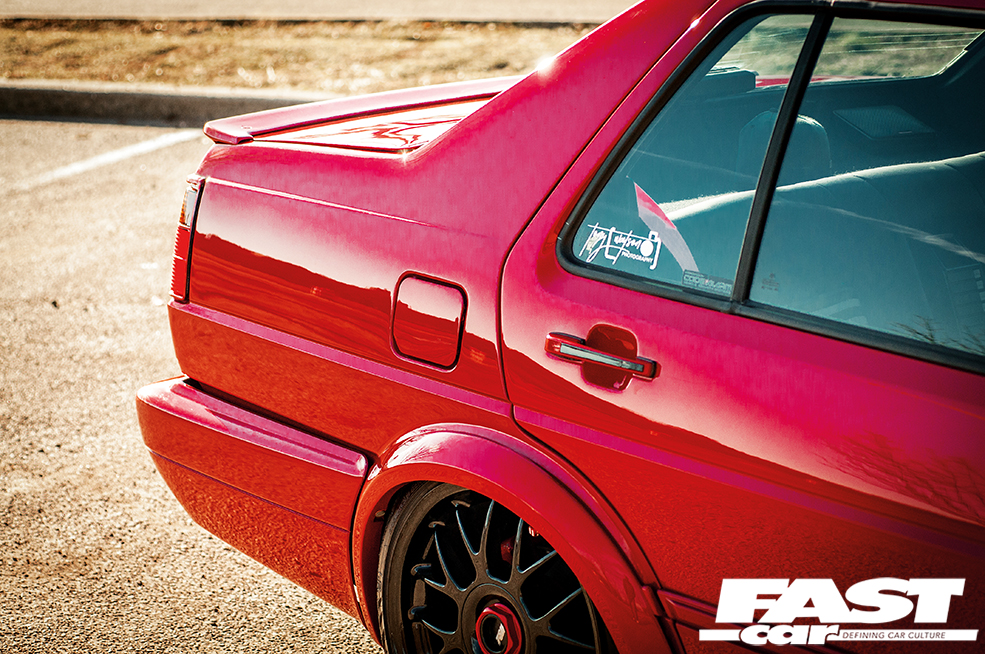 This car is a culmination of love. Love of the brand, the people, and the game. The community itself has taken to the car with the same love. So far, the car has taken Top 25s, Top 50s, and Best Paint at EuroSummit Invitational in 2018. What’s next for the “Red Rocket”, as the Jersey Hooligans have named her? Roberto tells us; “You’ll just have to see what tricks I have up my sleeve next!” The car can remain as it is in our eyes. Congrats on such a beautiful machine my friend… not too shabby, when thrown together with love! 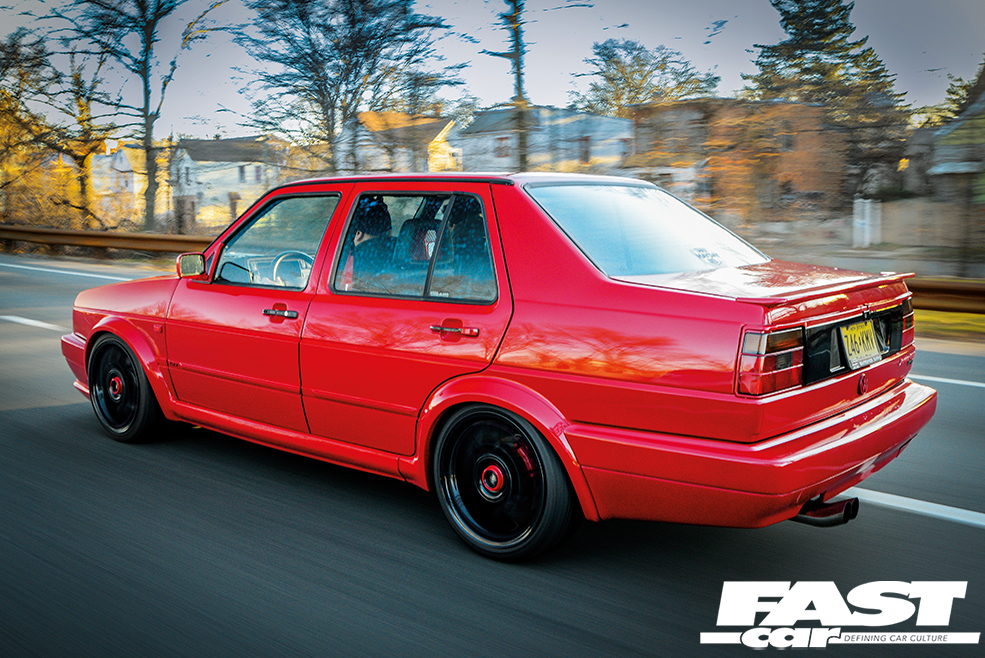