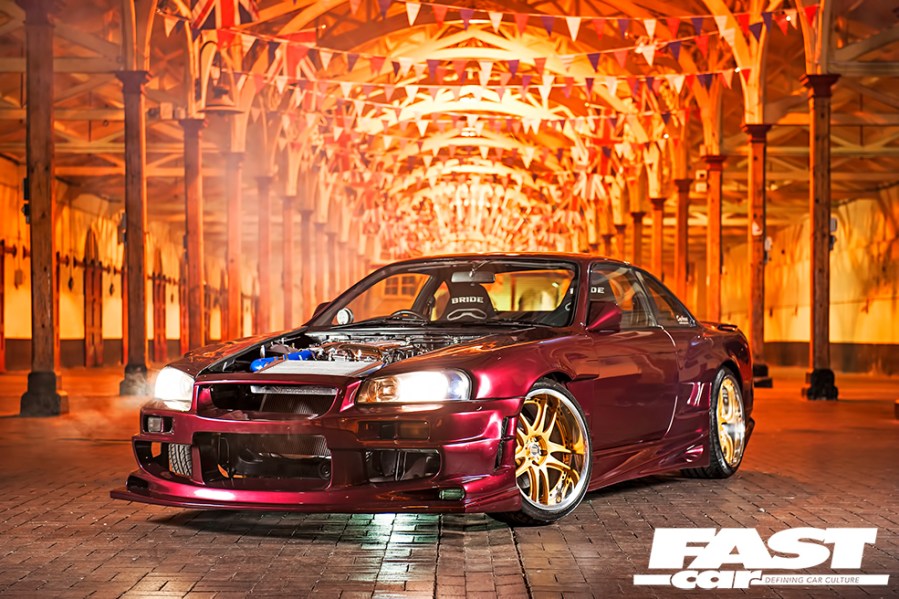 Welcome to this week’s FC Throwback, where we take a look back at some of our favourite previous feature cars. This week it’s James Alaia’s tuned Nissan S14 from back in 2012…

Whilst most people bring back a stick of rock or a good dose of Chlamydia from their holidays, Importer James Alaia decided to bag himself a top-spec Silvia S14 instead!

For most people, holidays are all about sun, sea and sex on the beach. For our mate James though, his trip over to Japan saw him return home with this mental Nissan.

When it comes to modding cars, we’re all fully dedicated to the cause. But James took things to another level by taking his holiday romance back to his home in Australia, and then shipping it again when he moved back to the UK! Well, when your motor sports an impressively long list of top Jap goodies you’d be mad to leave it.

James imports modified Jap motors for a living and has already owned a fair share of impressive motors, including VeilSide and Abflug Supras, an Autoselect R34 GT-R, Top Fuel EK9 Turbo Civic and loads more. It’s fair to say that his aptly named Nissan S34 is his craziest to date. “I love the controversy it causes! An S14 that looks like an R34 GT-R? It’s a complete ‘why?’ car! It would have been cheaper to build a modified Skyline, but that’s Japan for you. ‘Why?’ Cos I can” James explains.

What started off life as an already impressive S14 has ended up becoming a monstrous mix of our two favourite Nissans. Having been built by top Japanese tuning firm Bomex, the car is dripping in tuning goodies. No expense has been spared with this build and the bay is fully loaded with parts including an HKS low mounted turbo, V-mount intercooler set up and Apexi intake, all backed up with a Mines ECU. It’s said to be good for an estimated 350bhp.

It didn’t end with the engine though and things under the car are just as juicy! HKS have been given the task of dropping the S34 closer to the tarmac and hiding behind those killer custom built 19in Volk racing rims are a set of Porsche stoppers. James isn’t afraid to get the car out on the track either, so Nismo control arms and strut braces have been fitted, along with Yashio factory camber arms.

It was time for James to up sticks again and head back to sunny England. With the Nissan squeezed into his suitcase they both headed halfway round the world. All these miles had taken their toll on the Nissan’s body so when James had the car safely on UK soil it went straight off to his good friend Alex at GT Garage for a well earned tidy up.

The guys at Bomex Japan had spent 12 months carefully crafting every inch of the Silvia’s body to create this S34. The front end has been completely replaced using Bomex R34 GT-R wide body fenders combined with matching front bumper and carbon bonnet. The back of the car has been done to match by using an R34 Bomex bumper that seamlessly blends into custom made wide body rear fenders and finished off with an R34/S15 hybrid built boot that’s topped with a Rocket Bunny spoiler. Alex spent three months fixing cracks and strengthening the kit to bring the car back up to the high standard that Bomex had built it too.

Who knows where James’s adventures will take him next, but you can rest assured that his monstrous S34 will be there right by
his side.