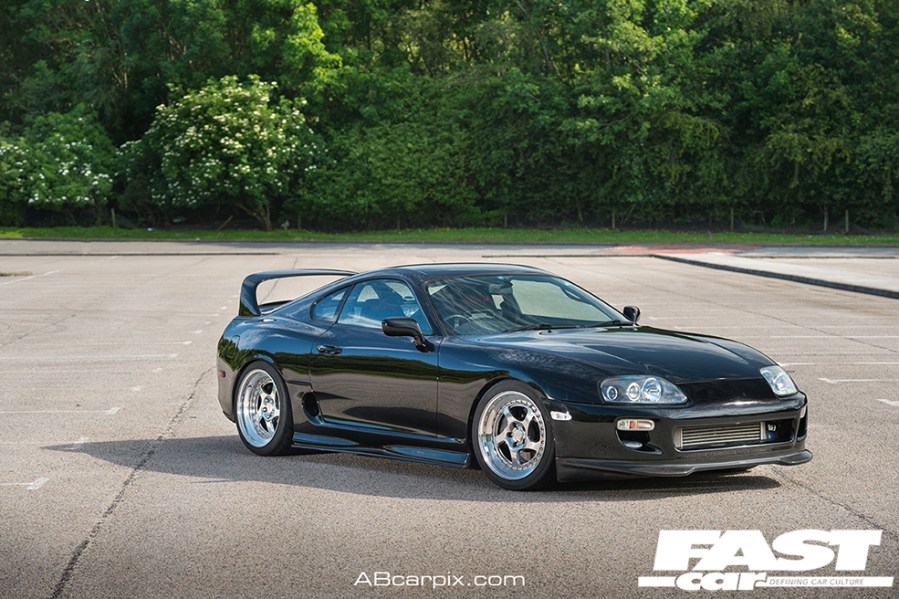 Tearing across Scotland, devil horns aloft, we find a seriously hardcore tuned Mk4 Supra rekindling the spirit of the nineties with an angry modern twist…

There was a bit of a gulf between Metallica albums in the early 1990s. The eponymous record which everyone colloquially refers to as ‘The Black Album’ changed the metal game in ’91, but it would be a full five years until they followed it up with the controversial Load. Helping to fill the void came Pantera’s Far Beyond Driven in early ’94; arguably more groove metal than thrash metal, it ticked the hardcore boxes for the faithful, and tied into the prevailing social trends of the time. See, the automotive sphere was pretty metal then too – the Japanese invasion of big-power GTs designed for the US market created a clutch of cars designed specifically for blasting down the Pacific Coast Highway with the throttle pinned, metal blaring on the stereo, the fast-paced drumming and relentless riffs spurring the driver on to ever higher planes of speed.

James Dron can tell you all about this. As well as owning the tuned Mk4 Supra you see here, he also plays guitar in Ray Brower and a variety of other metal bands, sharing festival stages with the likes of Slayer and Deep Purple. “My favourite bands – Metallica, Slayer, Sylosis, Pantera – provide a great driving soundtrack,” he grins. “It’s easy to get carried away on a backroad with fast, aggressive metal accompanying you!” 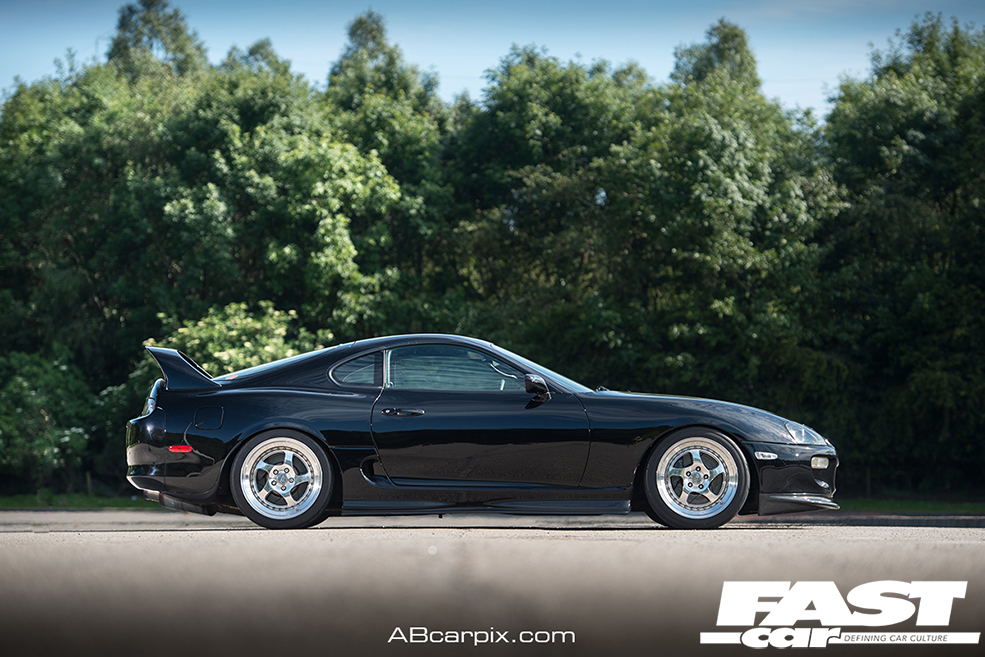 A tuned Mk4 Supra is very much a guitarist’s car too. While a drummer may lumber about in a Volvo estate, necessary for carting around the massive kick drums and cymbal stands, shredders’ rides are inherently more rock ‘n’ roll. And it’s fair to say that Supras have been a key part of James’s life right from the early days. “Ever since I played Gran Turismo on my first PlayStation back in 1997, I wanted a Supra,” he explains. “I’ve modified every car I’ve owned, right back to my first one, a Mk5 Golf; insurance prices were ridiculous for the GTI/R32 and I was 18 at the time, so I ended up with a 1.4 – but I bought some Mercedes S600 ‘6-slot’ monoblocks, KW V2 coilovers and a full R32 bodykit. It had a Powerflow exhaust and was as low as the coilovers could go!”

This really gave him a taste for modding, and by the time he was 21 James was driving a white Mk4 Supra SZ, wonderfully fulfilling those childhood gaming dreams – it was an NA model that the previous owner had swapped the twin-turbo motor into, albeit retaining the 5-speed ’box. Hell of a ride for a 21-year-old, and after four years of thrashing around in it he decided to buy a full-fat, ‘correct’ 6-speed TT. And that’s the car you see here. 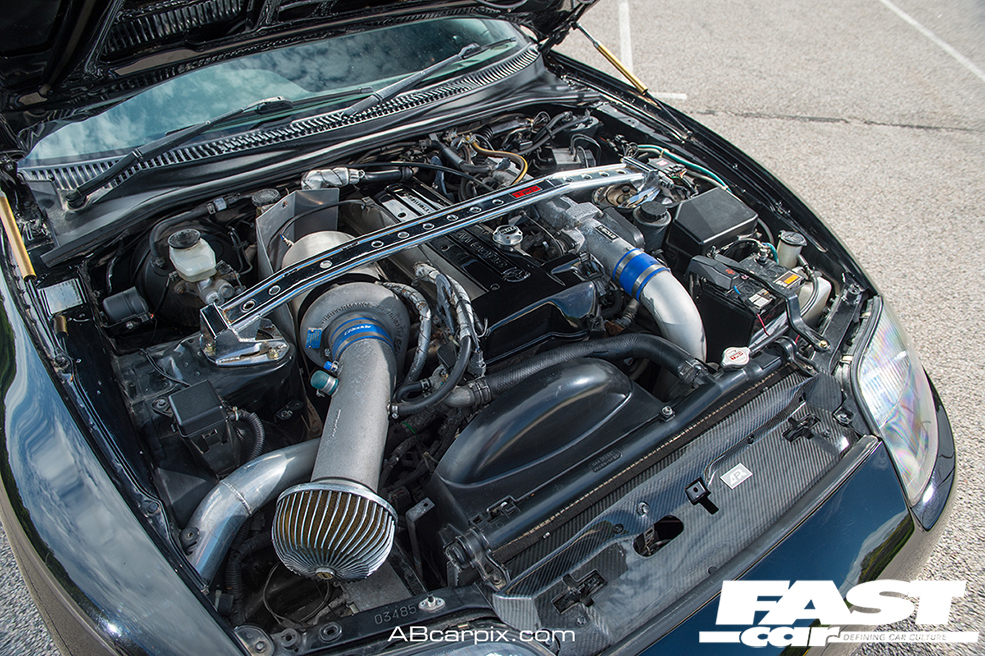 It wasn’t a simple case of buying the right car and instantly winning at life, however. In 2014 James broke his ankle, necessitating getting an automatic to give the break a, er, break, and this brought on a slew of alternative choices; a quirky Honda SMX got him about for a while, then another, and then he found himself dailying a Mk5 Golf GTI before trying (and failing) to be sensible with a Saab 9-3 TiD. All the while, though, the Supra was waiting in the wings for its time to shine. And one day, in a moment of madness, he decided to buy another Supra with the idea of it being a parts car for the main build: once again, it was an NA 5-speed with a 2JZ conversion, an ex-Banzai feature car which yielded its red leather seats for the ‘main’ Supra as well as a set of WORK Meister S1s, which will be swapped over soon. “Having this second Supra means that I have a contingency of a lot of parts should anything go awry with the other one,” reasons James, and you can’t really argue with that. “I have a whole spare 2JZ-GTE at my disposal! I just need to decide whether this second Supra is salvageable and I put it back on the road, or if I look to build the engine on the side ready to put into the first Supra…” 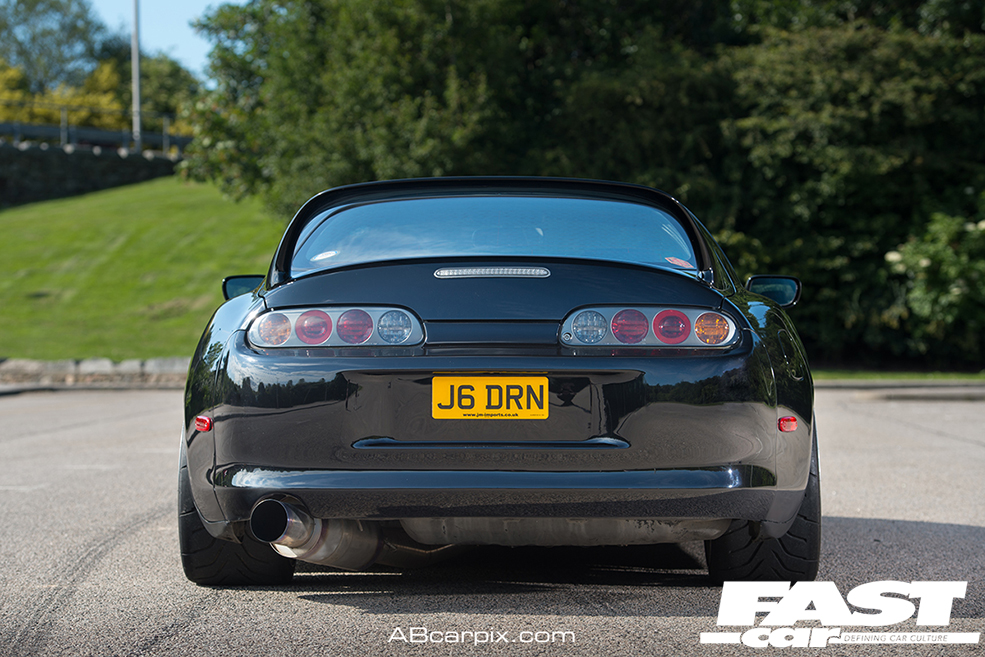 The agony of choice, eh? And by this time he really was champing at the bit to get cracking with the build. After all, it was already in excellent order and superb spec – the perfect base for what he was planning. “The car was in fantastic condition when it came into the country – only 30k miles on the chassis on arrival, and I’ve only put another 20k on it in the last seven years,” he says. “It had a Ridox front bumper, OEM sideskirts, OEM Recaro ‘confetti’ passenger seat, Recaro SPG fixed-bucket driver seat, AVS 5 wheels (in black with red lips), and Tein Superstreet coilovers when it was imported. I wasn’t a fan of the bumper in isolation – I like it with the full Ridox kit, but not by itself – and I detested the wheels, so I fitted an OEM facelift front bumper and some CCW 3-piece rims. The wheel spec was such that the front arches needed rolling and the rears were slightly flared to avoid scuffing. The single turbo conversion had already been carried out, and the car was tuned by HKS Kansai in Japan – it was sitting at 650bhp, ready to play!”

The arch work was arranged by the company who sourced and imported the car, JM-Imports, following which James rolled up his sleeves and got busy with fitting the HKS Kansai carbon front splitter and Shine Auto carbon rear diffuser. The car also ran an APR GTC-300 carbon rear wing for a while, and a set of BC Racing coilovers were fitted – because the Teins were wound all the way down, but simply weren’t low enough for James’s liking!

“At one point the HKS GD clutch failed,” he continues, “and was replaced with an HKS LA twin-plate clutch by a garage that I can’t remember the name of… just as well I can’t, as they did a terrible job and caught the rear crank seal when doing it, so the clutch got contaminated with oil and was as good as dead 2,000 miles later! So this was again replaced by me and Daniel Johnston at DJ Autos with the current RPS Carbon triple-plate unit.” 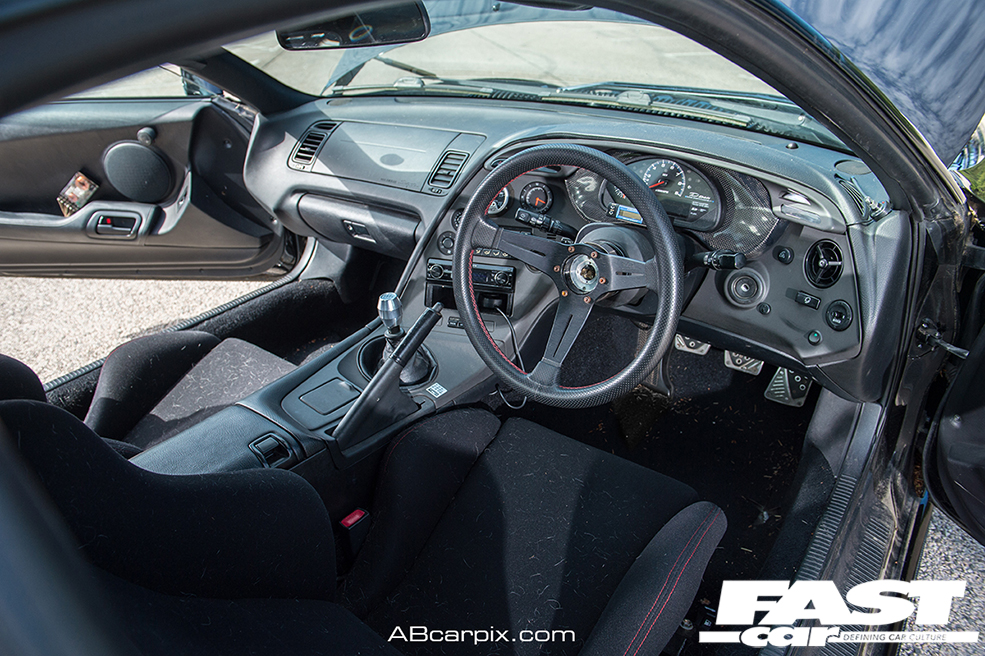 Trials and tribulations are all part of the game of course, and thankfully the next step proved to be a pretty stellar success: James commissioned Toole Design in Lochgelly, Fife to fully repaint the car in an Aston Martin shade called Storm Black, which is a beautifully sinister black with a devilish red flake that pops out in the sun. “They also fitted the UK-spec rear bumper and Ridox sideskirts at this time,” he says, “Various little bits were welded up too, like the rear washer nozzle, aerial and so on, and the front plate mount was removed.”

Everything was looking very slick, so it was inevitable that something would now break in order to restore the natural balance of the universe. Pulling a burnout on the startline at a Banzai event at Crail, the stock small-case diff chipped a few teeth and the propshaft completely twisted. Always one to see opportunity in crisis, James’s tactic to make sure that wouldn’t happen again was to beef everything up, bolting in an SRD heavy-duty prop and getting Craig Shand at Clarke Motorsport to swap in a stronger A02B diff.

“All in all, I guess the build hasn’t been a gigantic undertaking as such, but rather a wealth of visual incarnations while always staying relatively close to stock,” he muses. “And there have certainly been plans which have resulted in some poor decisions being made – I bought a Syvecs S6 ECU and some HKS 264 intake and exhaust cams in preparation for a modern turbo upgrade, but then sold them to fund the paintjob; I wish that I never did that, as the OEM Astral Black paint wasn’t that bad, I was just being picky and keeping up appearances from the high standard of cars at shows. A definite mistake as I prefer driving the car to attending static shows, yet it would seem I went completely against that!” 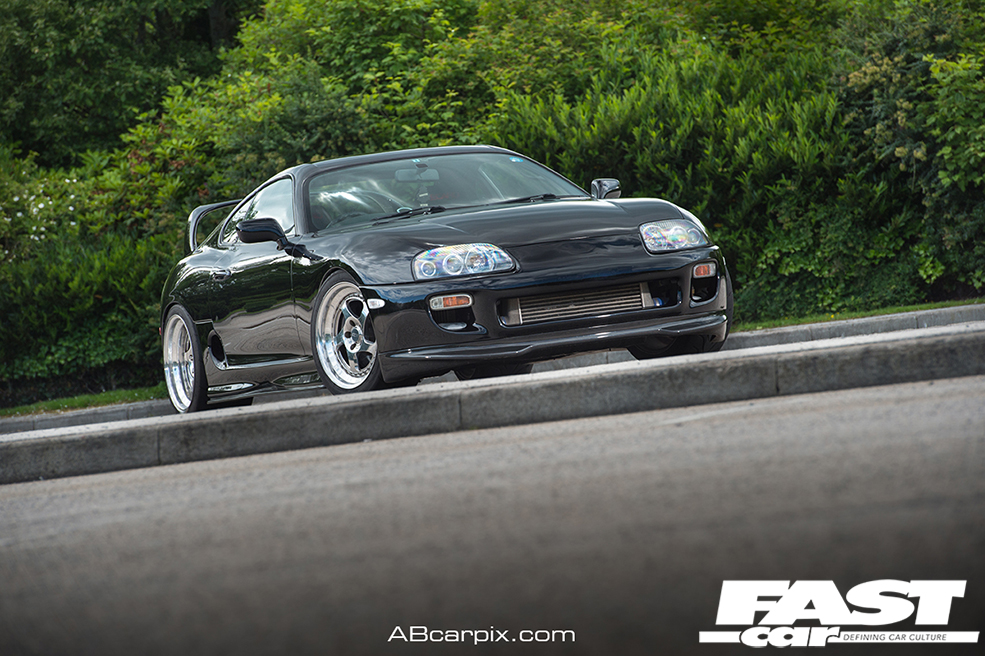 On the contrary, we wouldn’t call that a mistake at all. James is evidently into Supra ownership for the long haul (indeed, we get the feeling that after seven years he’s really just getting started), and it makes sense to give the exterior a unique twist. After all, with 650bhp to play with, it’s not as if he was sacrificing performance for looks. Now he’s got the complete package, and a perfect base for future power upgrades. And it’s clearly not just the man behind the wheel who gets to enjoy it: “People’s reactions have always been very positive,” he smiles. “The Supra gets photographed a lot, I get asked a lot of questions about it, and any time I’m on the street someone always, always wants to race with me. I never get any peace, be it Vauxhall VXRs, RS Audis, GT-Rs, exotics – anything!”

He’s certainly playing to a raucous crowd. James admits that when he was originally looking for this particular Mk4 Supra, he was also considering a Dodge Viper or a TVR Tuscan. “I still feel like I made the right choice,” he says, and we have to agree. While those other sports cars are all well and good, there’s nothing more metal than a badass nineties tuned Mk4 Supra. Strength beyond strength, keeping that throttle pinned and that turbo spooling hard, all nightmare long. 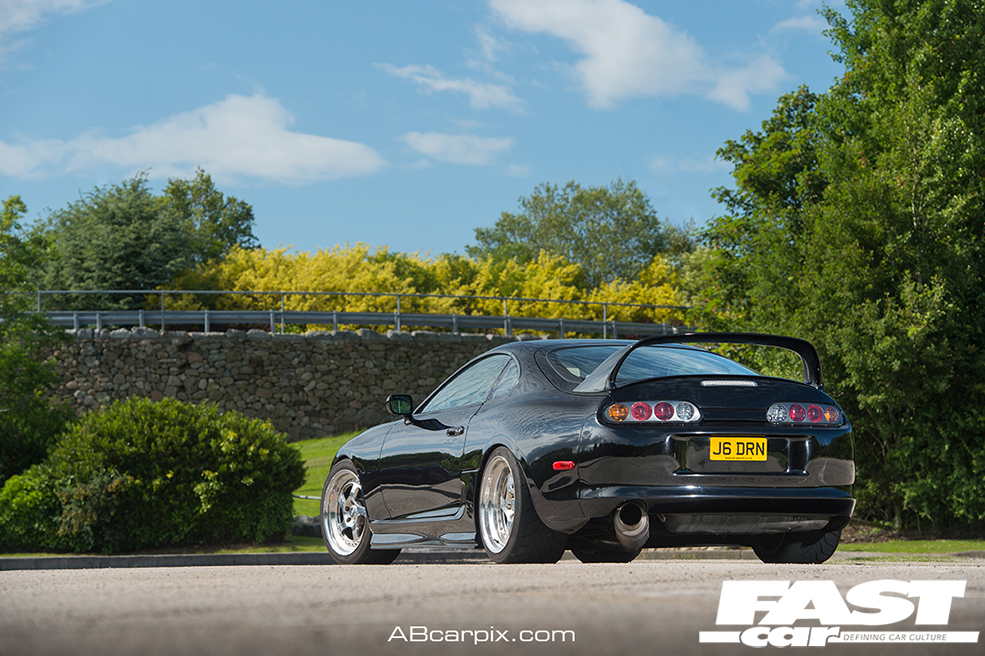