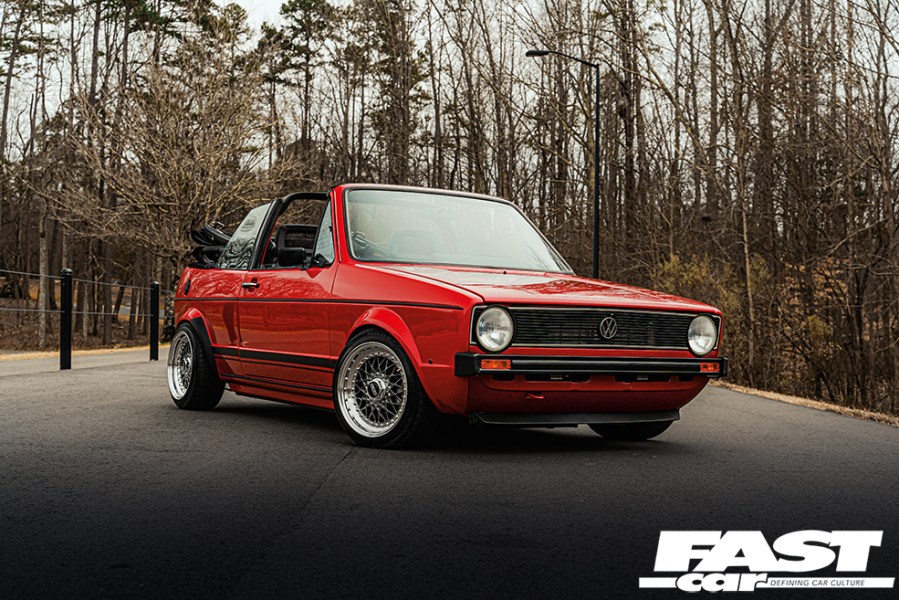 With a big-turbo 1.8T, John Nguyen’s nut-and-bolt resto tuned Mk1 Golf Cabrio is a daily-driveable family mover with a wild side.

For all the planning, the global parts-hunting and hard-sought inspiration that go into a big build, the spark that really gets things moving can often be down to good fortune. That missing ingredient can take many forms; old friends, maybe a car park spot that you never forget, perhaps just happening to be in the right place at the right time. Or, in the case of John Nguyen’s impeccable Cabrio, a generous helping of all three.

Unplanned tangents are a common thread running through most of the projects you’ll see in these pages, but the twists in the tale of John’s car history mean things could have shaped up very differently. It was Japanese imports that lured him away from a teenage interest in Jeeps, and a childhood friend who then shifted that focus toward Volkswagen Group machinery as a young adult. As you might have guessed, that’s the trend that’s stuck, and it’s been helped along by some enviably fortunate encounters along the way. 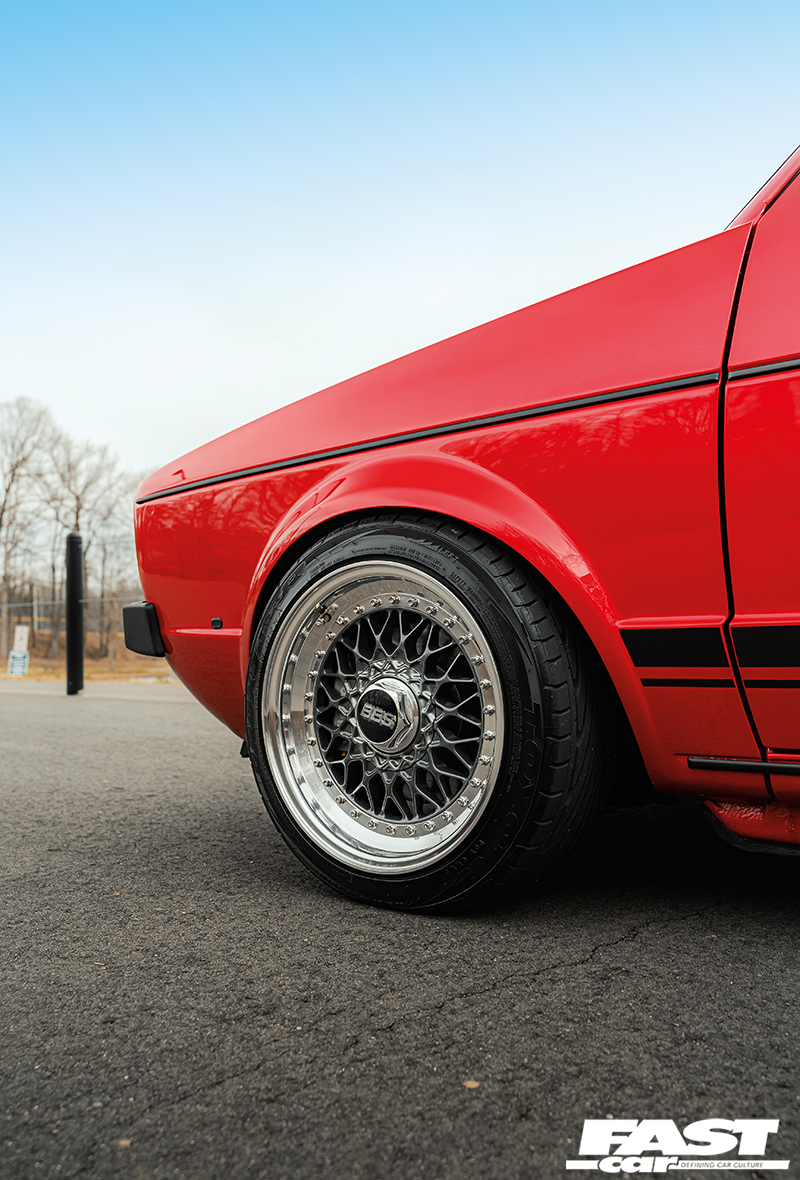 “A few years ago, I was driving through a small town called Kings Mountain here in North Carolina, and I saw this ’83 Rabbit on a lot. It was a 1.7 carb with a four-speed, and the dealer had bought it from an older lady who had kept it garaged so everything was stock – even the 13-inch wheels with the chrome hubcaps. You don’t walk away from a car like that – and I still have it today,” he tells us.

“Then my wife and I were out for breakfast in the Rabbit, and this guy came over to us saying he had an ’85 Cabriolet just sitting around. My wife was talking about wanting a convertible – though not necessarily a Volkswagen – so I went to his house the same day and we purchased that too. We got a good deal on it, and the body was solid, so the idea was to just paint it and for my wife to drive it around.” 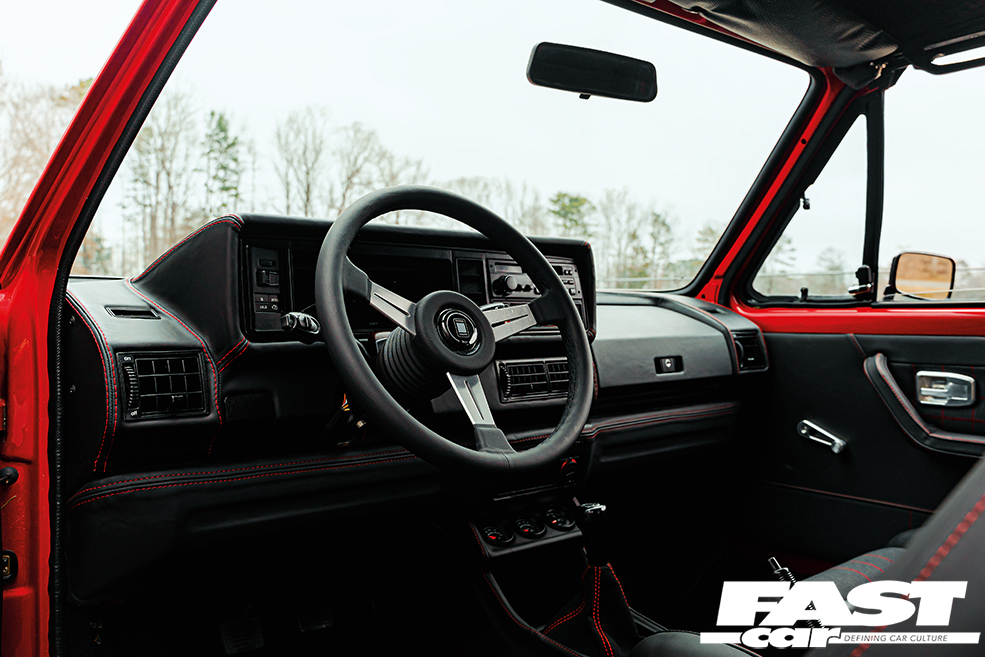 The Cabby had other plans. Although it ran and drove, the engine quickly started hinting that it was as tired as the faded blue paintwork, and its tendency for rough running was as untraceable as it was unwelcome in a daily driver. The unplanned purchase had quickly become an unplanned priority for hardware John was saving for the now dry-stored Rabbit; a 180hp 1.8T engine and gearbox from a Mk4 Jetta, and some helpful expertise to get it dropped into its new home. 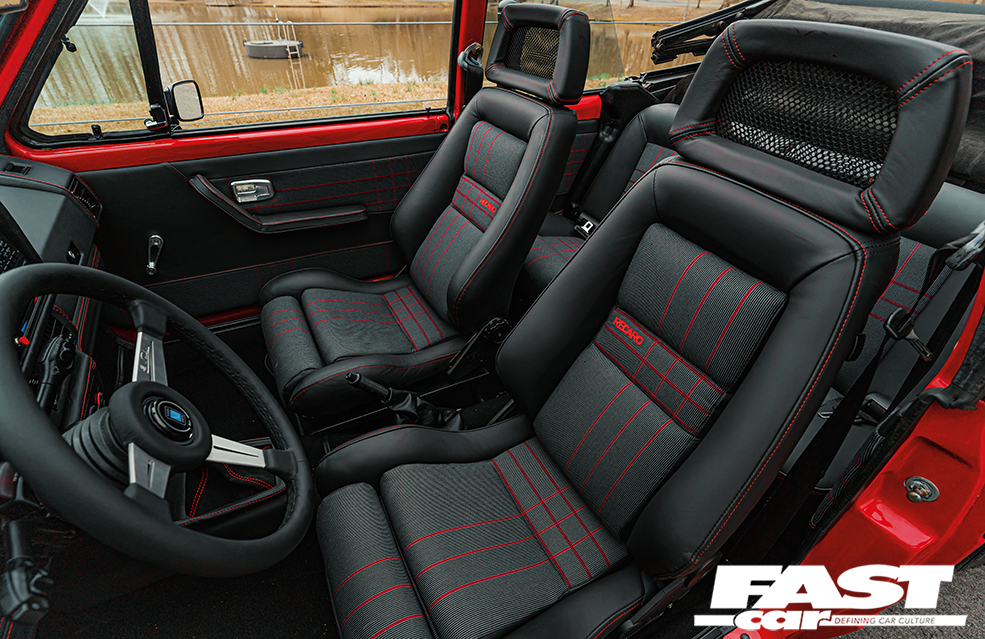 “We kind of grew up with each other, and we’re really good friends – I kept an eye on him, he kept an eye on me,” John explains. “Mike got me into the European and Volkswagen scene, then I’m a graphic designer by trade, so I did a lot of his logo design and got his company started with the branding. The Cabriolet was too good to waste, so we decided to swap the 1.8T into that instead, to give it a new lease of life – not as a show car originally, but it got out of hand…”

That’s not surprising. Eurowise specialises in preserving and sympathetically upgrading the full spectrum of European cars, and that logo has found its way onto thousands of OE-quality parts enabling classic machinery to benefit from modern performance. With no urgent deadline to get it back on the road, Mike and John had the flexibility to let the Cabriolet spec evolve with the build. It’s allowed enough time to carry out a full rotisserie-mounted bare-metal restoration of the body, and iron out every wrinkle of a better-than-factory-finish 1.8T swap. 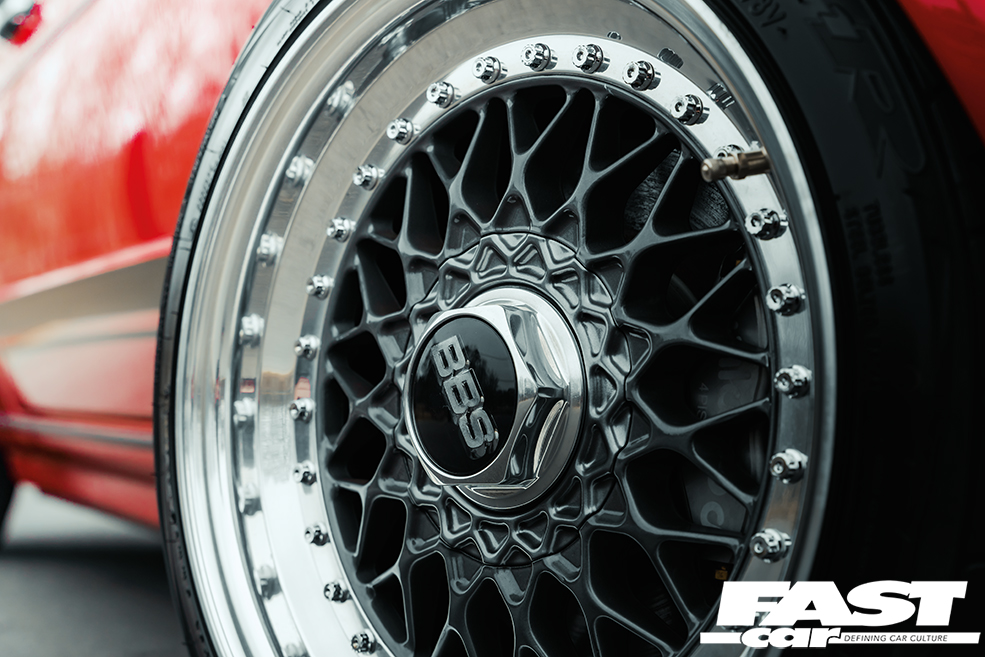 Mike’s memory of that process might well be familiar to anyone who’s faced a similar project. “The body was in decent shape but, on a Mk1, the deeper you get the more you find new things to replace,” he laughs. “John realised he wanted something reliable, so throughout the build, we went overkill and just about everything you can touch was rebuilt and replaced. He wanted to drive and enjoy the car, and not stress about it. So it turned into a full-blown job.”

Even the ‘new’ engine didn’t escape that treatment. Every moving component within the block was replaced with stronger, better lubricated and lower-friction parts to keep it reliable, before being paired with the big-port head from a Passat ‘AEB’-code 1.8T. Not surprisingly, everything that’s on show is just as impressive, with each branch of its tubular exhaust manifold carefully wound into the huge Garrett GT2871R turbo, and custom boost pipework with an 80mm Integrated Engineering inlet manifold to strip out any bottlenecks en route to the cylinders. Stick it on an engine stand, and you could put it on display.

Already familiar with the swap itself, Eurowise teamed up with Dave Wright at TDC Shop in New York to give the powertrain a showcase it deserves. With the shell stripped bare, everything at the back of the bay could be deleted or relocated behind the dashboard, and the car was converted to a Mk3 spec CE2 fusebox and bumper-to-bumper custom loom. No small job, of course, but it put foundations in place for tucking everything under the bonnet, using a stock ECU with a United Motorsports map, and moving the battery to the boot. If you’re wondering, that’s what the Coke can is for.

“We’re builders, but we’re also mechanics, so we’re keen to build cars to make it simple for the next person to work on them. Everything is un-boltable, everything is accessible, and we try to build it the same way a factory would build a 1.8T Mk1,” explains Mike, propping the bonnet open with one hand. 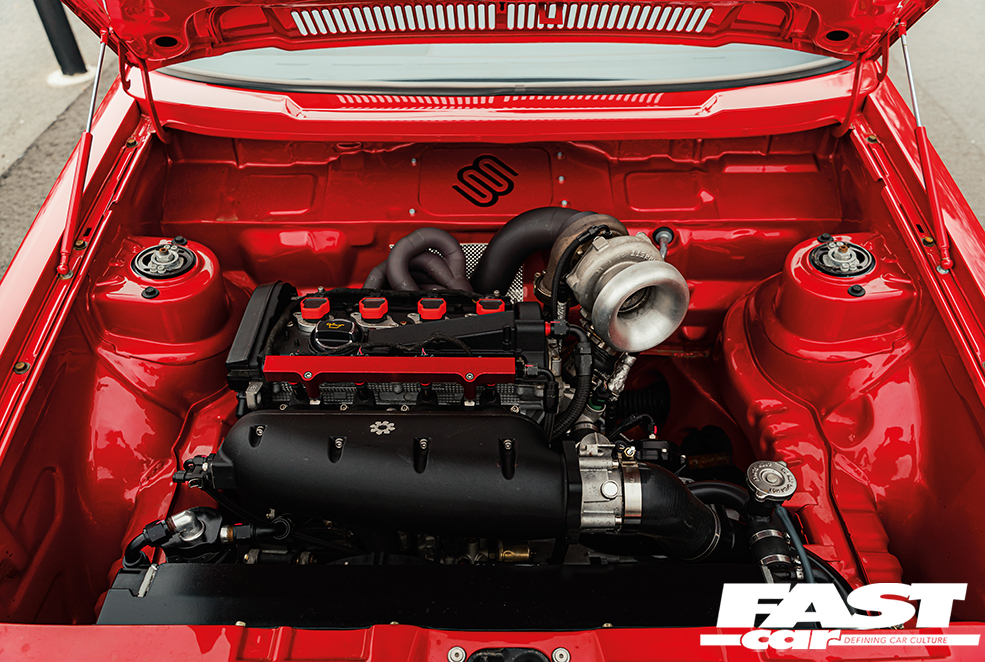 “The trouble is you can’t typically fit a radiator and intercooler on a Mk1 without it taking up the entire engine bay. On this car, we chopped the back side of the of the front fascia, then Dave – my fabricator – built a really cool custom intercooler and we tucked everything behind the grille. Everything is custom made, and we tried to avoid using couplers wherever we could just to make it look cleaner.”

Presentation aside, that immaculate four-pot makes around 400hp at the wheels on pump gas, even with the boost dialled down to 16lbs. It’s a figure engineers couldn’t possibly have anticipated the a tuned Mk1 Golf Cabrio would ever deal with, and Mike remembers early test runs, as a bare shell with little more than the powertrain bolted into it, being hilariously frantic. Reining in the torque steer and tyre destruction as the boost kicks in required a re-think of the Jetta’s 02J transmission. Now fully rebuilt, it uses a longer fifth gear to keep things civilised while cruising, while a Wavetrac differential helps keep the torque in check. Specced mostly for road use, its unhinged side stays hidden until John turns up the taps and lets it loose. 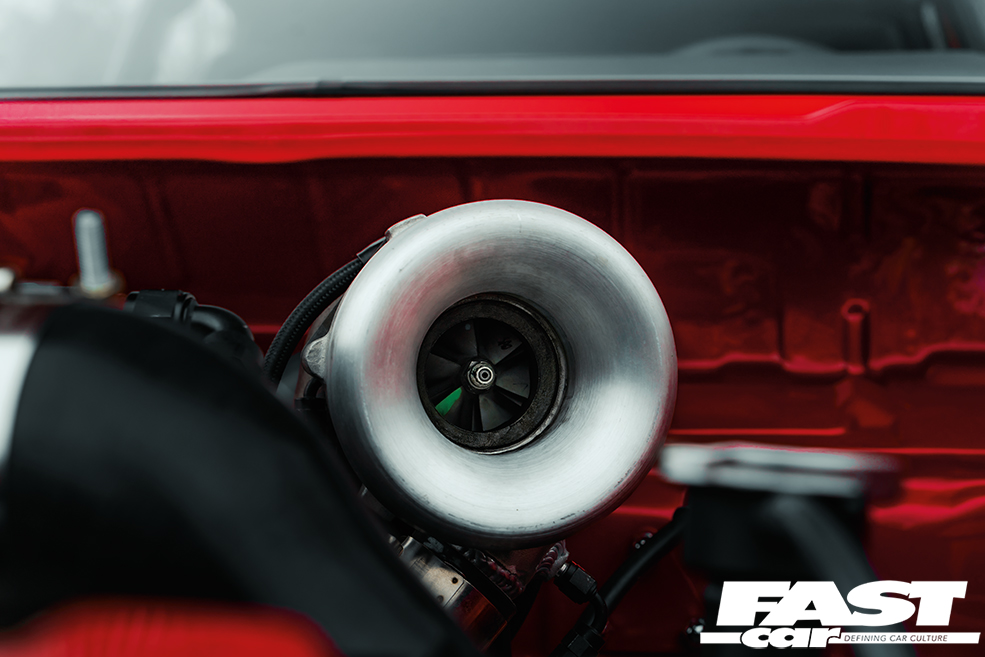 While Mike was bringing the mechanical parts up to spec, John had turned his attention to reviving the body, and adopting a similarly meticulous work ethic. The Toyota Barcelona red paint was laid down at Precision Fit and Finish in Virginia – almost five hours’ drive from the Eurowise workshop – but it’s an investment in early Golf expertise that means it’s not hiding any undiscovered rot. Having gone to that effort, the Cabriolet was also backdated to a pre-’78 Euro spec, with GTI-style black side stripes to contrast the red, and a full set of rubber parts to replace even the slightest signs of weathering.

Despite being set up as a cruiser, the combination of a soft-top body and frenzied on-boost power delivery required some expensive chassis tuning. John used BBS RS001s instead of RMs to get as much space as possible behind the spokes and had them refurbished as a staggered set at Ehrlich Wheel Works. It also scrubs off speed as quickly as it piles it on, using a full package of Eurowise and Wilwood brake upgrades, including four-piston calipers at the front which are less than half the weight of standard items, and a twin-caliper setup to replace the drums at the back. 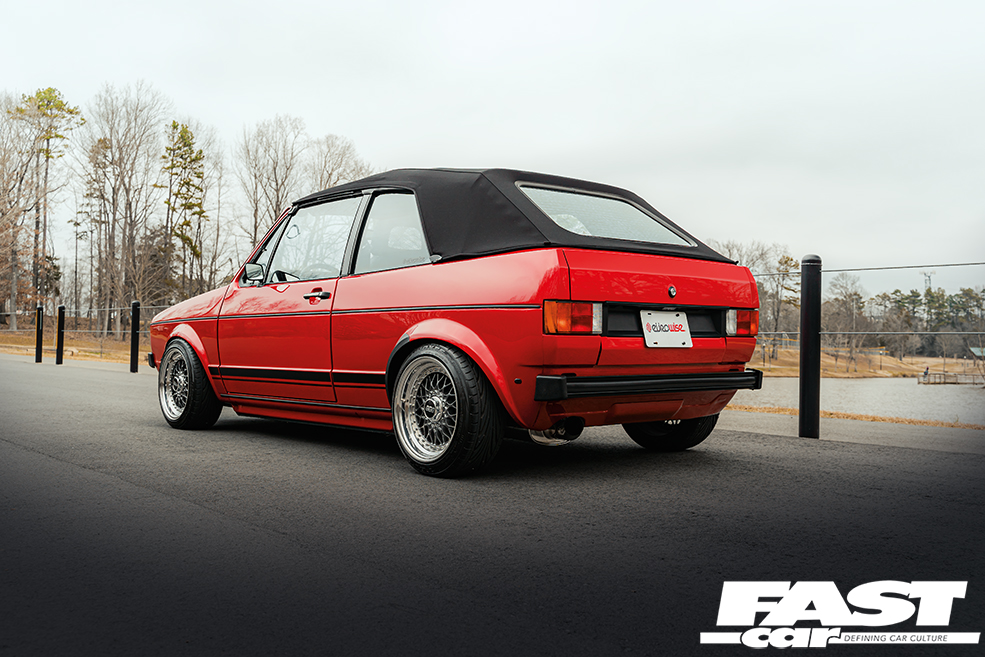 The stance is static, using ST Suspensions coilovers and camber-adjustable top mounts, and the Euro Sport rear strut brace re-introduces some of the rigidity lost to the absent metal roof. It also serves an anchor point for a pair of colour-matched booster seats, when the kids are on board.

Carefully selected parts inside mean the cabin almost looks factory spec, despite the blend of 1970s and 1980s influences. The Rallye fabric is still available new from Heritage Parts Centre, but the Recaro fishnets came from Japan and were sent to Anchors and Thread –yes, they’re high-end yacht trimmers – in Rhode Island to get the right finish. The Mk2 parts bin also donated a set of Digifiz instruments, slotted in behind a Nardi wheel which in turn is matched to the aluminium handles and hide-wrapped, red-stitched dashboard. 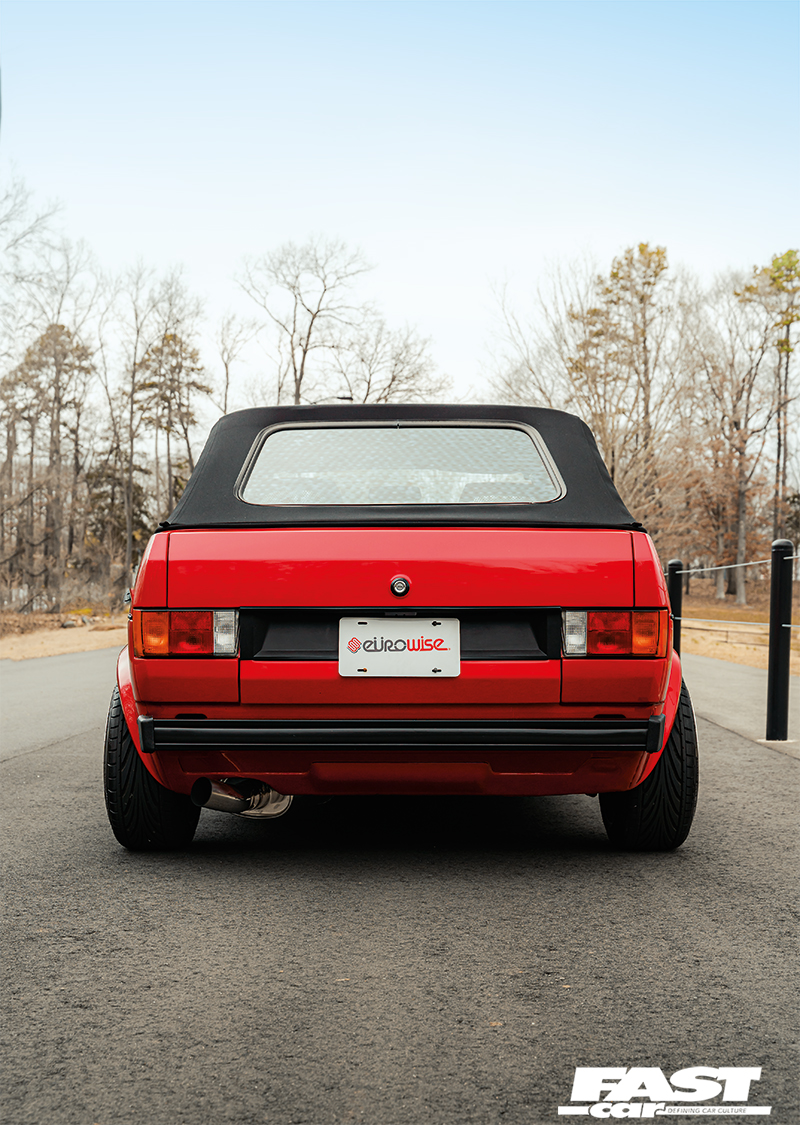 Even in the context of a full restoration and that engine build, this was no small task, says Mike: “The interior was probably the most difficult part of getting the car done. I lost contact with any good upholstery guy and we used someone local, then ended up ripping it out and starting from scratch. The Recaros had some missing pieces, the Digifiz was tricky and we had to use different places for the seats and door cards, the carpets and the dashboard. It was hard to find someone who could do it right,” he admitted.

The upshot of that process is it’s slotted effortlessly into family life. The Golf has become a regular at local Cars and Coffee meets and gets most-weather use with John, his wife and often the kids in the back – complete with a ‘baby on board’ sticker in the rear screen. In a car that’s not known for performance, it’s a laid-back look with plenty of potential to surprise. 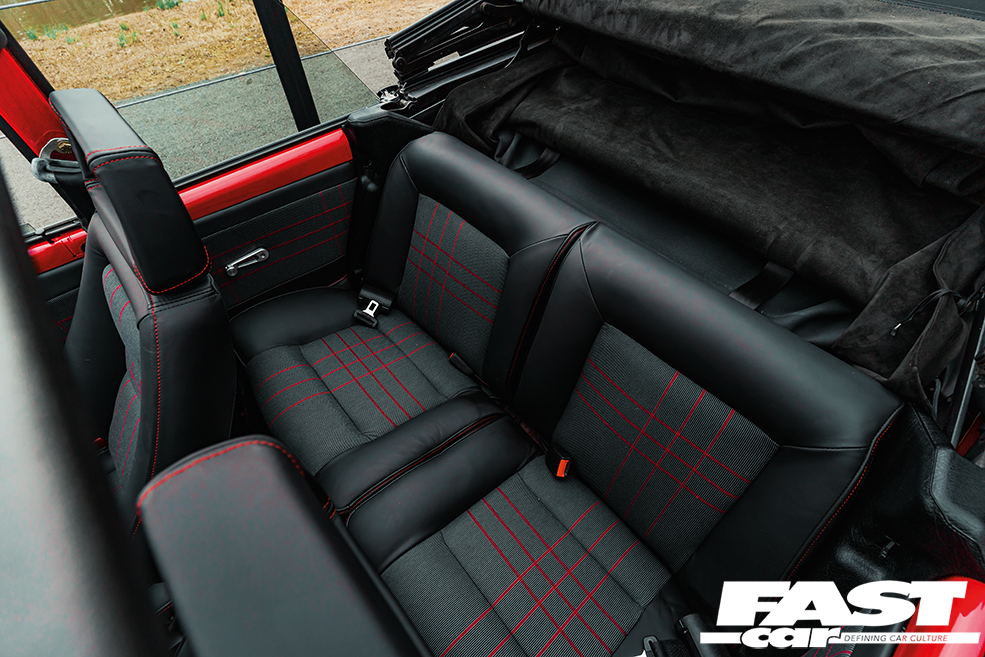 “I try not to get on it when I’ve got the wife and kids with me, but if I’m by myself then it’s a little crazy,” John laughs. “It’s like driving a golf cart on the highway, and first, second, third and sometimes fourth you’re not really getting any traction if you’re going for it. My wife enjoys it and she’s always out with the top down, but it looks like a sleeper and still mess with someone when you want to. Nobody would ever know.”

Of course, the knock-on effect is a change of plans for its stablemate. The ’83 Rabbit, that by-chance discovery that opened the door to this project in the first place, has taken a back seat while John has focused on the kids and Cabby. Six years since its last outing, and there’s potential for a chance encounter at Cars and Coffee to end up moving it on to a sympathetic new owner. But the Cabriolet isn’t going anywhere. 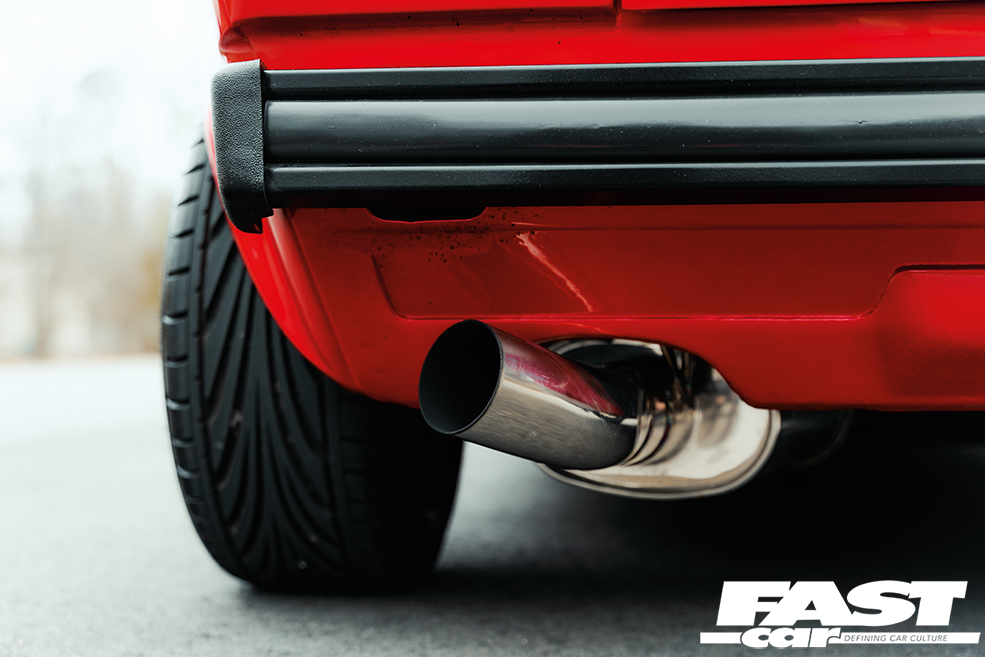 “The plan is to just keep it, drive it and maintain it,” says John. “I’m not putting it into shows or anything, just cruising around with the family – especially during the spring and autumn, as summertime here in the south is a bit too hot for it. It’s been great having something that can bring the family together, and my boys are still young enough for me to get them into cars. Hopefully it’ll stick around for a while, so they’ll get to enjoy it too.”

Who knows, those back seat trips to car meets could turn out to be the next enviable good fortune in this story – the spark of inspiration for a couple of future Volkswagen enthusiasts with their own take on reinventing them.  With plenty of scope for influential car park spots, and family friends to help turn those ideas into reality, we reckon there’s no better time or place for those projects to start out. 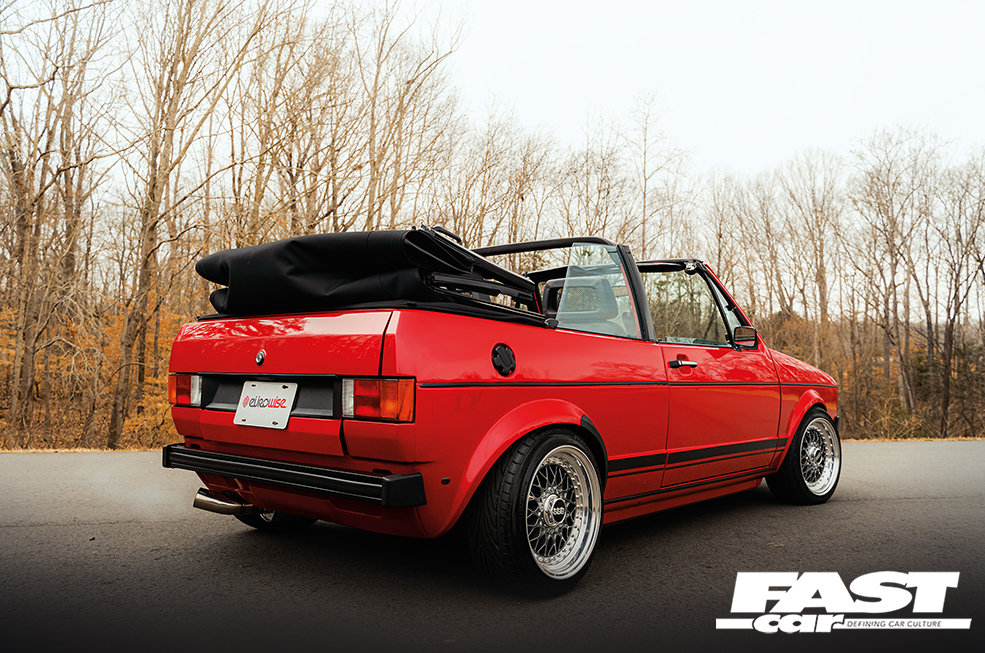