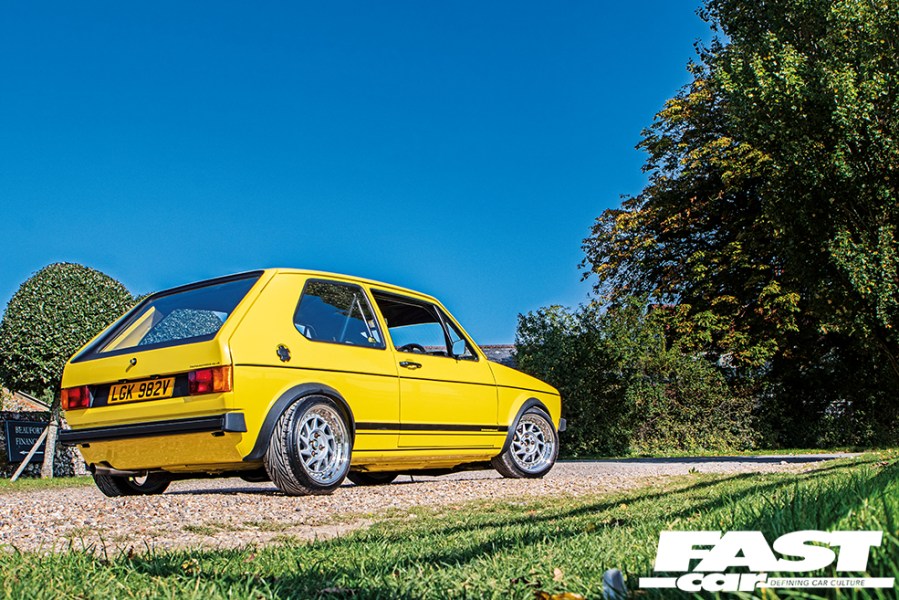 There’s a theory that lots of Mk1 Golf owners probably live by – it’s a relatively slow car that feels exciting to drive at ‘sensible’ everyday speeds. Yep, a 400hp Golf R is undoubtedly a much faster and more capable car point-to-point, there can be no doubt about that, but talk to the owner of any tuned Mk1 Golf and they’ll romanticise the purity of the experience, the sheer amount of glass and the tenacious, rampant involvement that simply defines fun and urges you to search out the redline whenever the horizon unfolds. And that’s with the 112hp 1781cc 8v motor on-board. Turn up the wick slightly and much like 50-year-old Paul Lovegrove from Berkshire, you might just find yourself falling down the rabbit hole (no pun intended) of chasing race car like response and ear-bleeding induction howl from an engine that might look fairly period correct, but is in fact a 21st century incarnation of a 90’s Wolfsburg legend. Honestly, there’s so much tech in this restoration you won’t believe it. As many of you will no doubt attest, it’s a rather slippery slope and once you’re at the top of the ascent there’s only one way to get back down, and that’s quickly.

For Paul, who’s good pals with a certain Jamie Packham from J-Tech Automotive in Reading, his love for cars began through a series of fast Fords – “I had a Mk1 Fiesta Supersport as my second car, Mk2 Escort RS2000, a few Mexicos, XR2i and XR3i’s before getting into VWs. Now everything I own is a VW, even my everyday business car,” says Paul. It was back during his early 20s that he moved away from the Blue Oval and opted for a spot of teutonic sophistication, “I must have been about 23 when I got my first Mk2 Golf 16v in Oak green, I can even remember the reg – H62 BRG it was.”  Paul mused. Racking up numerous other nice Mk2s through the years he’s the first to admit that none of them were ever really, “show car standard,” even the Mk2 with the BAM 20vt engine in that J Tech also built for him was a nice car, but wasn’t, “quite there,” in Paul’s opinion.   It was largely through chatting to Leo, J-Tech’s trusty in-house spanner guru, that Paul stumbled onto Mk1s. “Leo had been building his Mk1 G60 for a while and every time I popped into the garage I’d think, cor… that’s cool.” 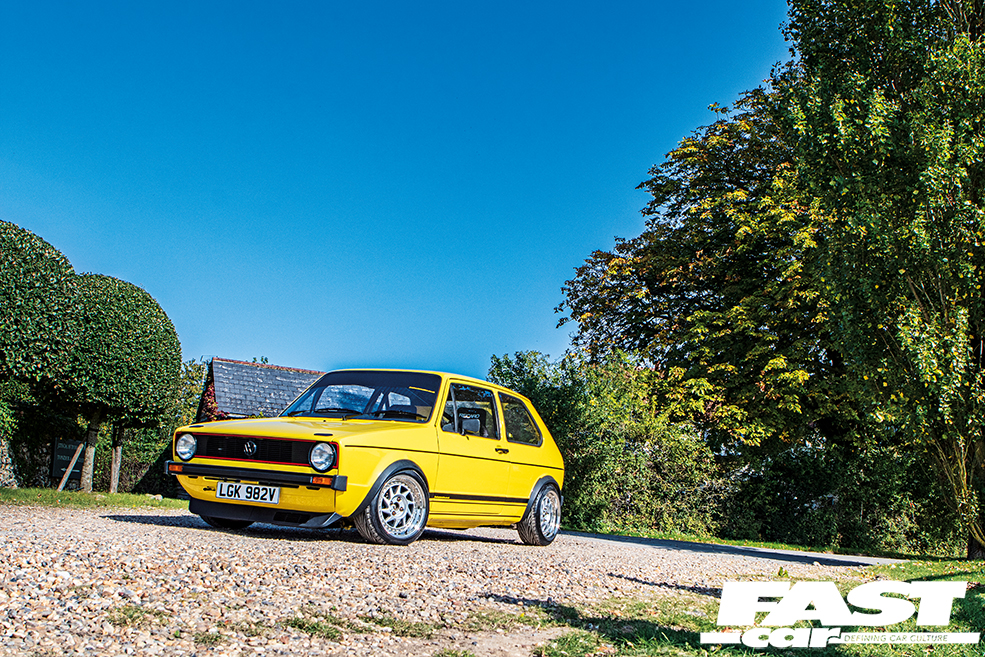 Before he knew it, Paul had snapped up a 1980 Series 1 orange Mk1 Golf as a project car.  With a restoration underway on that vehicle Paul went to visit a mate who had a few parts for sale and that’s where things really shifted, “I spotted this lovely little yellow  ’79 nestled in the corner of the garage. It had no engine in it. but it looked to be rot free and had probably been restored once before. I left him my number and asked him to call me if he fancied selling it.” A few months later the phone went. Needless to say, Paul didn’t hang about and the series 1 LS in Lemon Gelb (LA1D) was soon on its way to the Lovegrove residence.   “initially I just had Jamie drop a basic 2.0 16v ABF engine on 45s in it and I ragged it around Goodwood and a few other trackdays trying to keep up with the really well sorted and more focused J-Tech cars,” He soon realised an important consideration though, “I was nowhere near as fast as the big turbo gang, but the ‘79 just kept going and put up with relentless abuse – I learnt a lot about myself, my ability and the car that way.” Sure enough, mentored by Jamie’s bad influence and insistent nagging, the full-on, race spec engine that was destined for his orange Mk1 was soon being groomed for a new home. “The ABF was fine and reliable, but I just felt as if I’d seen that engine through and needed something with a little bit more oomph to match my growing confidence, it didn’t help that Jamie kept saying, ‘when are we going to build you something proper?’

The resulting 9A block that’s been mated to a KR 16v head has morphed into a 21st century work of art with not a bolt, line or bracket left untouched. Now, extracting power from VWs N/A engines has never really been that easy, so the plan was always to go as far as possible without drastically altering the block or the crank too much.  To that end 83mm Wossner high-compression (12.3:1) pistons are now mated to Pauter H beam rods to ensure a much bigger bang. Having learnt a lot from previous 16v builds, and with the ECUMasters ECU Black series in mind, Jamie has incorporated a rather nifty crank sensor setup from a Caddy 2k and also modified an 034 Motorsport cam sensor to fit the side of the Dave Crisell fettled cylinder head which is port matched and CC balanced to within .2cc per cylinder. Thanks to a set of high-lift, custom grind Kent cams cams and uprated solid lifters it should now be capable of revving to an exquisite 8000rpm, although at the time of going to press it had yet to be fully mapped – the lads perhaps somewhat conservatively predict it will make anywhere between 200 -220hp, yet it remains to be seen what the final figure will be. One thing is for certain, it’s not going to hang about and that’s not just because of the engine. 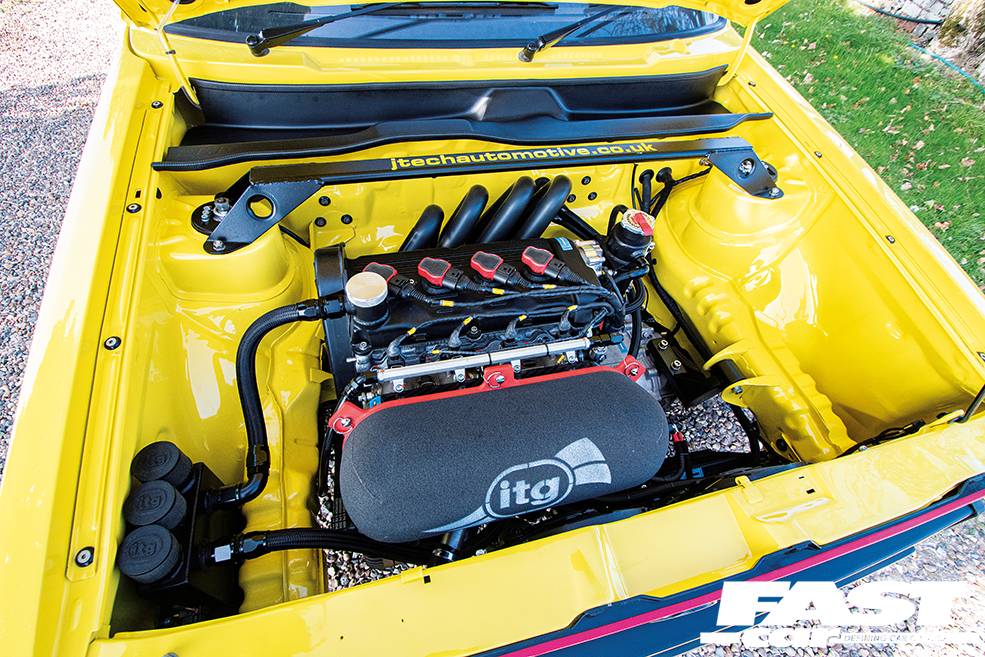 It surely is a work of art beneath the bonnet as a bespoke Edwards Motorsport exhaust manifold snakes it’s way beneath the stock Mk1 steering rack, the concealed cam angle sensor tucked away beneath a Mk2 Escort header tank complete with the Stant cap. Eagle eyed viewers will also notice there’s no ugly brake servo or balance bar assembly, the car coming with a Wilwood reverse mount pedal box with 0.75 master cylinders for epic, incredibly progressive stopping power that truly requires some modulation of the whoa pedal to make the 280mm G60 stoppers and Mk2 16v rear discs work their magic. “if there’s one area we’re uncertain of it’s probably the brakes,” Jamie tells is, “But once it’s being used in anger, we’ll soon find out if they’re up to the task. After all, if he’s slowing down then he’s not doing it right, and it’s a really light car anyway,” chuckled Jamie.

For something that appears to be so simple, there’s a colossal amount of work in that bay. Even the breather system has been re-worked with a modified 9a cam cover, custom header tank and super posh AN-6 braided lines in black, while 20vt coil on plug packs bring the ignition system bang up to date and allow for the sequential injection system to work as planned via the ECUMasters Black series EMU. The ITG carbon fibre airbox and sausage filter now consume incoming air with a truly fierce bark, “I couldn’t believe it when we started it up on the base map, it’s sounds and revs just like a sportsbike. It’s so free breathing and keen to reach for high RPM. It still sounds like a retro car as well, which was really important to me.” This is no ordinary 16v motor – If Marks and Spencer’s did valver lumps, this is the one for the Christmas advert. Supersonic air now enters the combustion chambers via a set of Jenvey 45mm direct-to-head throttle bodies with 330cc Bosch fuel injectors to really bring the drive alive, and did we mention Jenvey ETA2 fly by wire electric throttle actuator? Turbos are all well and good, but no true Mk1 pervert would sacrifice that raucous, staccato, slightly lumpy idle for whoosh tissch sound effects, would they? As Jamie points out, “There was no point fitting that ECU if we weren’t going to make full use of its potential, so the new sensors and custom fab work became vital.” 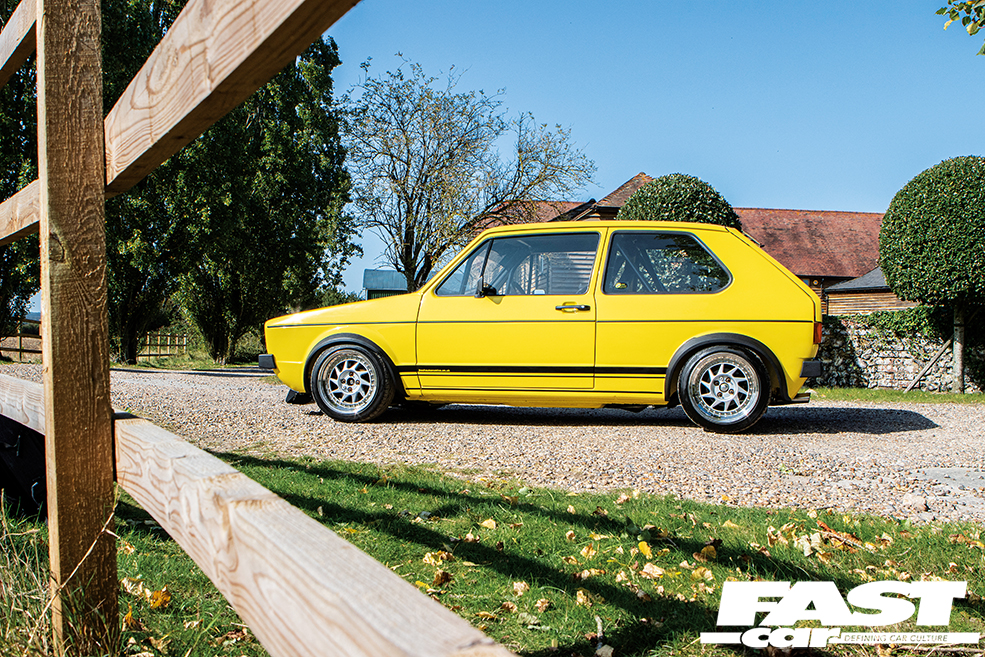 We could realistically spend this entire write up just talking about that engine, but needs must! A fresh coat of Lemon Gleb was applied by Berkshire Auto Bodies just before the engine went in, satisfying Paul’s slighty perverse need for a perfect rear end, “I can’t stand it on Mk1s when people fill the rear seams on the back panel! Mine had gone a little rusty so I decided to have the whole thing painted again – inside and out. Duly dusted in the factory Lemon Yellow hue a GTI grille, duck spoiler with custom ducting for the 13 row oil cooler, wheelarches and side strips were the only real concessions to style – after all, why mess with perfection? That fairly innocent exterior gives no clue as to the performance potential within.

Jamie then bolted in a Safety Devices cage with some custom made door bars and secured the brace of Recaro SPG pews into place on Recaro subframes. While the whole thing smacks of racecar – check out the OMP wheel and easily accessible brake bias adjuster, Paul decided to use Leo’s old red stitched door cards for a little opulence and noise suppression inside. Glance down at the gearknob though and the true piece de resistance of this build is revealed, “I found the Honda Quaife sequential ‘box secondhand online one day and had to have it. After experiencing Jamie’s Drenth gearbox in his E46 M3, I knew the gearbox had to be as close to a touring car as I could get.”  Thanks to Jamie’s wisdom the five speed cog swapper has also been fully stripped and rebuilt using Quaife spares and adapted to the VW flywheel and clutch with a new bellhousing – not an easy task, while a Tektro brake lever has been adapted to engage reverse. “I’m really looking forward to trying out the full throttle flat shifts that have been mapped into the ECU when I get the chance,” Paul beams enthusiastically. It’s going to be mental, that’s for sure.  A load cell sensor on the gearstick detects when upshifts are about to happen and cuts the ignition timing through the ECU, and probably throws a two step style flame out of the exhaust as you keep the throttle pinned to the floor. Similarly, on downshifts the same load cell will also automatically detect a load and the ECU will blip the throttle leaving you free to concentrate on the task at hand. 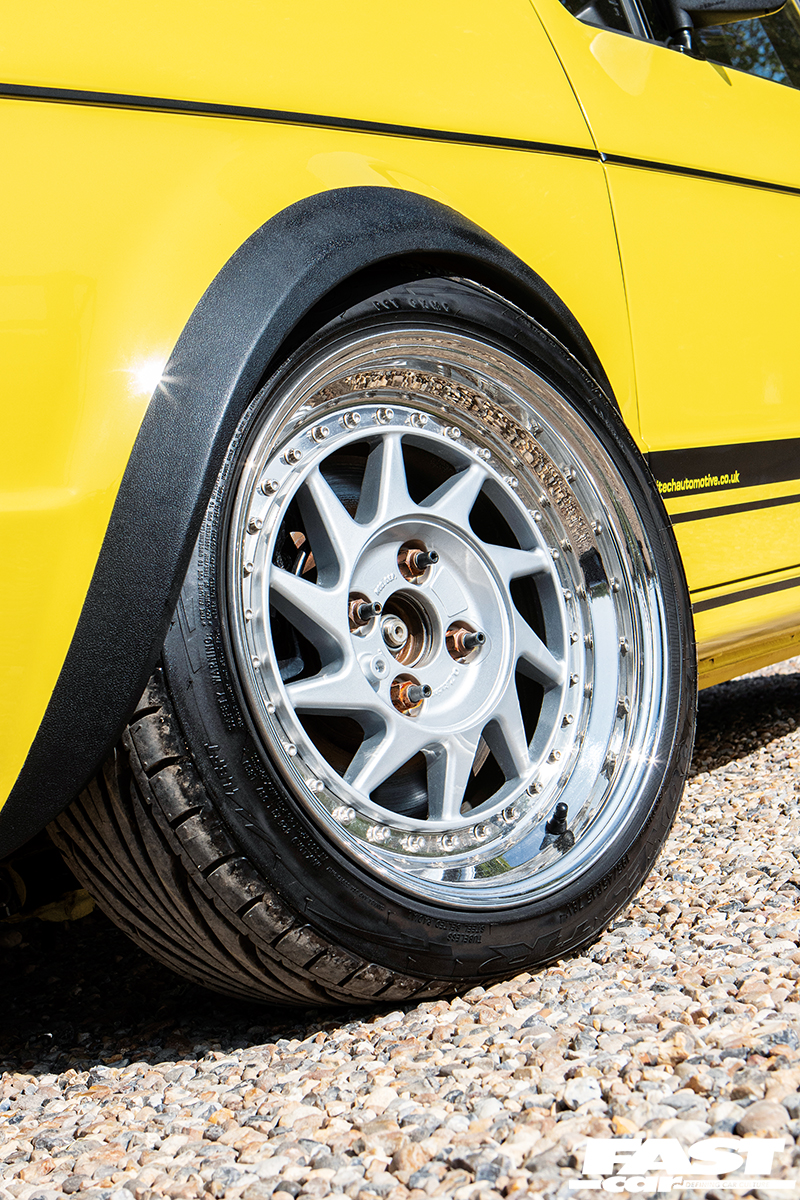 Hopefully the ride won’t get too wild though because KW Variant 3 coilovers now keep it planted on the asphalt with a surprising degree of both compliance and control – camber and castor adjustable top mounts enabling a comprehensive geo setup that has been absolutely dialled in to Paul’s preference.

Keeping it roof side up is also enhanced by Eibach ARBs, an unknown strut brace and some funky lower wishbone bracing to boot. Aesthetically those 8.0×15-inch OZ Turbo split rims narrowly squeeze in beneath slightly widened front wings, and Paul is fully aware that the 195/45×15 Toyo Proxes T1-R rubber will probably be replaced when it comes to getting down and dirty on track. Therein lies the duality of this cars personality. It’s an all-out-race car for the road, with all of the precision and high-tech toys to make it a total weapon, while remaining fully road legal and able to pop down to the local for a Sunday roast. Us? We just can’t wait to see and hear the results of the final mapping, and witness the spectacle of a ’79 tuned Mk1 Golf keeping pace with some very exotic machinery.   It might look all warm and fuzzy, but don’t let the Bananaman exterior fool you, this thing is built to last and race for hours. 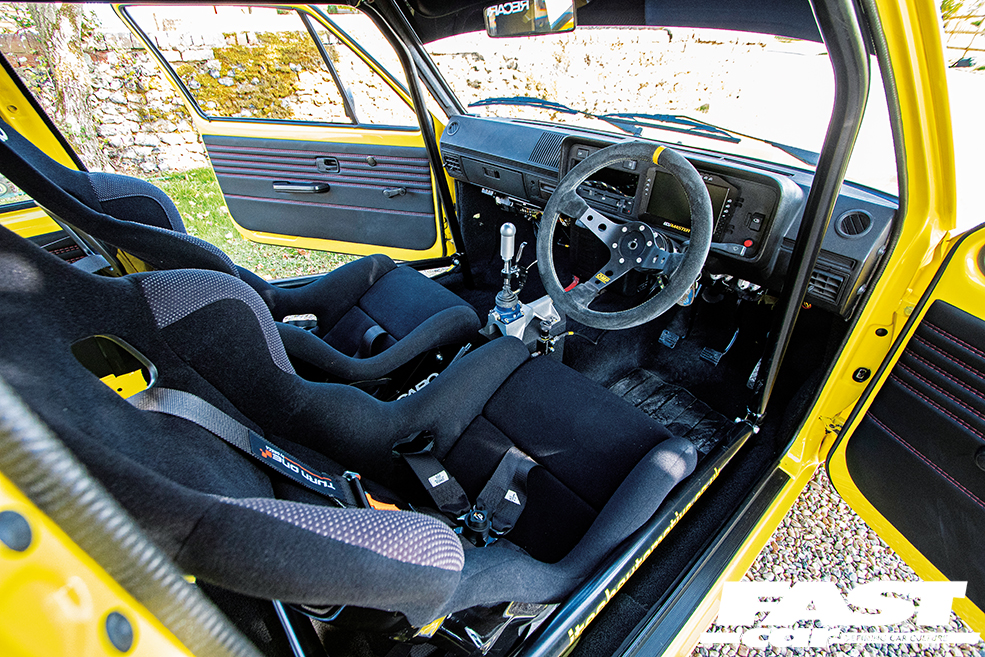