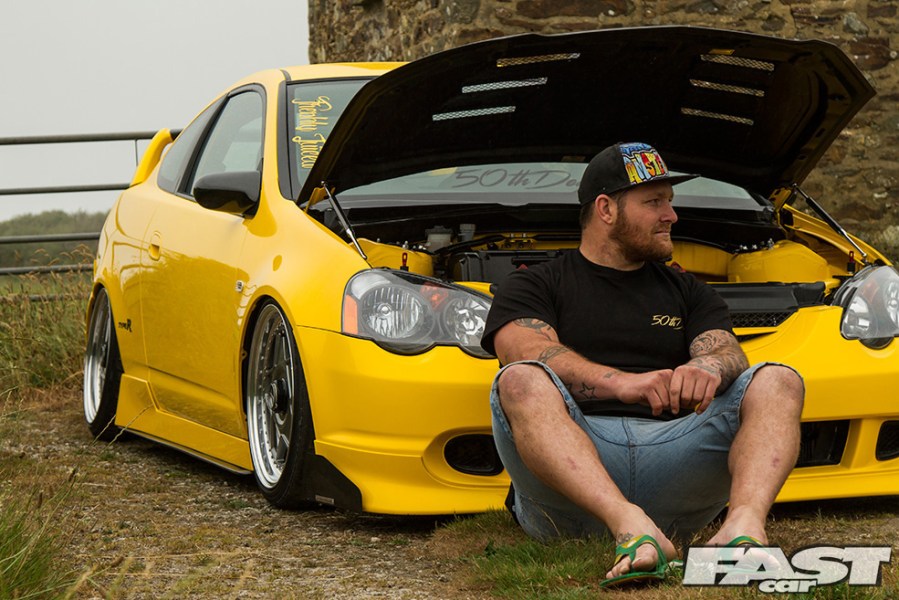 If you bought a car that turned out to be an absolute dog, what would you do. Scrap it? Sell it on? Not Ashley Lawton. He decided to strip it right back and turn it, piece by painstaking piece, into the best tuned Honda Integra DC5 in the country. No amount of rust can slow this man down…

The almost-retro DC2 Integra presented an intriguing proposition back in the late-1990s. With the Gran Turismo-fuelled Japanese invasion convincing a new generation of British car fans of the merits of Rising Sun performance, the market was more than ready for this racy little poppet. The stratospheric halo of the NSX-R filtered beautifully down to this more affordable proposition, the first Type R officially offered in the UK. But the DC2 Integra wasn’t just paying lip service to that now-iconic nameplate. Contemporary sales literature proudly, confrontationally stated that “The R stands for Racing’’, and this was evident throughout the car. Honda’s starting point was to take the B18C1 engine from the regular Integra GS-R, place it on a plinth so they could stare at it for a bit and poke it with thoughtfully chewed pencils, then rework the thing for more of a road-racer application: molybdenum-coated aluminium pistons followed, along with a bigger throttle body, stronger conrods, reshaped intake valves and a bigger exhaust, transmogrifying the powerplant into the B18C Spec-R. These were hand-built engines, ported and polished by firm but dainty fingers, and they revved harder than most people could have ever expected. The numbers on the tacho went up to 10!

When the DC5-generation Integra arrived in 2001, the game had moved on a bit. Out went the hand-built B-Series and in came the next-level i-VTEC K20, with its howling redline mixed with surprising sensibleness. The DC5 Type R was effectively a rakish coupé version of the EP3 Civic Type R, but with an extra 20bhp or so, Brembo brakes, and an LSD. And it’s at this conceptual crossroads in the narrative that Ashley Lawton sidles in from stage left, smirking slightly at our Civic-Integra machinations. “Funny story,” he grins. “I actually used to own an EP3. I sprayed it Porsche blue, slammed it, tucked the bay and so on – and there was a guy around my way with a DC5 for sale. As a joke I said, ‘I’ll swap you’, and to my surprise he agreed! Deal done, I owned an Integra Type R.” All sunshine and rainbows there, until Ashley started looking a bit more closely at his new toy, when he figured out why the fella had been so keen to get shot of it. It was completely stock aside from some FN2 alloys and it appeared to be in mint condition – but it wasn’t. Not by a long shot.

“Talk about pulling the wool over my eyes!” Ashley grimaces. “When I started to jack it up, the car just stayed still as the jack continued to rise, it sounded like a bowl of Rice Krispies going nuts.” Ah, yes – that old chestnut. The DC5 wasn’t officially sold in the UK – every one you see over here is an import. Japanese-market cars don’t tend to get the rustproofing that UK cars do, so if you don’t do something about it, they get eaten alive by our gritted roads in wintertime. What Ashley ended up with, in fact, was a very pretty bundle of lace and flakes. He’s not one to throw in the towel, however. He had plans. “I took the car to the guys in the know – Autostyl in Chacewater,” he says. And from that point on, the DC5’s fate was sealed…

Before we delve into the full lunacy of what happened next, it probably makes sense to offer up a little context. You see, in spite of what you’ve read thus far, it’s not the case that Ashley’s solely a Honda fanboy. No, he’s a pan-marque enthusiast, having started off as so many of us do, fiddling with Euro hatchbacks as a teenager. Punto GT, Clio Williams, all that caper. Then one day his brother-in-law, Martin, took Ashley to Run to the Sun in Newquay, and the obsession with modifying started: Volkswagen T4s, more Eurohatches, even a Vectra that was featured in sister-title Performance Vauxhall. So it’s safe to say he has a fair idea of what he wants.

Life does also have a way of throwing a big fat spanner into the works, of course. “While the car was at Autostyl, I lost my job as a builder which banged a halt on any progress,” says Ashley. “However, the gaffer there – Ant – offered me a position, which meant the work could continue. Perks of the job and all! And with the mental skills of a chap called Ash Williams – who I pretty much owe this whole build to – and the perfectionist Kev Trigs, the DC5 started to take shape. I wanted a solid base to start with, so the whole car was stripped down and the shell sand-blasted, which showed the real scale of the rot. Honestly, I’ve seen fewer holes in a sieve! But we knew what we were dealing with and could make a plan.”

And what a plan it was. If you’ve skipped ahead to the spec box, you’ll see that what they’ve basically done is build the frilly shell up into a brand new DC5, honing, refining and upgrading as they went. The front end from the suspension struts forward is all new, as are the sills and rear arches, the neat custom boot floor that eliminates the spare wheel well – everything was done bespoke and in-house by the guys at Autostyl, Ant and Ash taking it all in hand and totally nailing the better-than-new finish.

“I didn’t really see my wife and kids for two years,” says Ashley (we’re sure he’s exaggerating).”I was working on the car through all my lunch breaks and in the evenings after work. It was full-bore to get this done and out the door! Since I was basically restoring the car I wanted everything to be new, as-new or better, so every part that could possibly be unbolted was removed, sand-blasted and powdercoated in satin black. All the bushes were replaced with SuperPro polybushes, new wheel bearings, new chassis sections, new headlights, every single nut and bolt replaced with marine-grade stainless steel, the works. Everything on it is brand new.”

All of this is spectacularly impressive, but you don’t get into Fast Car by putting the hours into a concours factory resto. No, this car has been superbly modified too, and it’s the ingenuity of this that’s been winning hearts and trophies.

The engine bay, for example, has been fully smoothed with an astounding 169 holes welded up. The engine itself is a proper little screamer, running ITBs and a Hondata K100 (this being the only route to remapping a K20, they don’t make it easy), along with the full Skunk2 catalogue and pretty much custom everything.

The bodywork isn’t just flawless, but also uniquely finished in a custom shade of Bold Gold. And yes, your eyes do not deceive you, the car is indeed aired out over those custom Autostrada rims. Purists can be damned, is the attitude here.

Seriously, the amount of work and lateral thinking that’s gone into this sublime DC5 knocks any other Integra we’ve seen recently into a cocked hat, it really is the best of the best.

“Ash at Autostyl deserves a medal with the amount of hours he’s piled into this car,” says Ashley. “From doing the filler work with me to prepping the car for welding, he’s basically as attached to the car as one of the wheels. And even when I found days I couldn’t see it through, there was Ash working away on my car, giving me a kick up the arse to get going myself.”

So was it all worth it? The endless graft, the late nights, the scraped knuckles, the complexity? Hell yeah, it was. “The reactions to the car are unreal,” he enthuses, eyeing it with almost fatherly pride. “I’ve never before built a car that my imagination made – now we’ve done it, I just can’t believe it. The engine bay in particular is a huge talking point – I don’t think there’s another DC5 in the country that’s been tucked as much as this.”

That largely serves as a metaphor for the build as a whole – there surely can’t be another Integra that’s had this sheer amount of effort expended upon it. To build it up as better-than-new from first principles is one thing. But to do so while also making it a show-stopping centre piece and a hardcore street-racer at once is quite another. When you hear what Ashley’s got planned for it next – “strip it, cage it, track it” – you get a sense of just how serious this guy is. Boys and girls, you see before you the new Gold Standard for Hondas.

THANKS
Ash Williams for being the backbone of this build; Kev Trigs for being the perfectionist he is in the paint department; Mr Autostyl himself, Ant, for endless advice and support; huge love to my 50th Degree Car Crew; my wife and kids for putting up with the long nights working on this car; massive love to my dad who passed away before I could complete this build, so I dedicate it to him – RIP, hero; my mum, for helping me out through the dark times and endlessly being there; and to Dusty for calls of encouragement and banter that kept me sane.