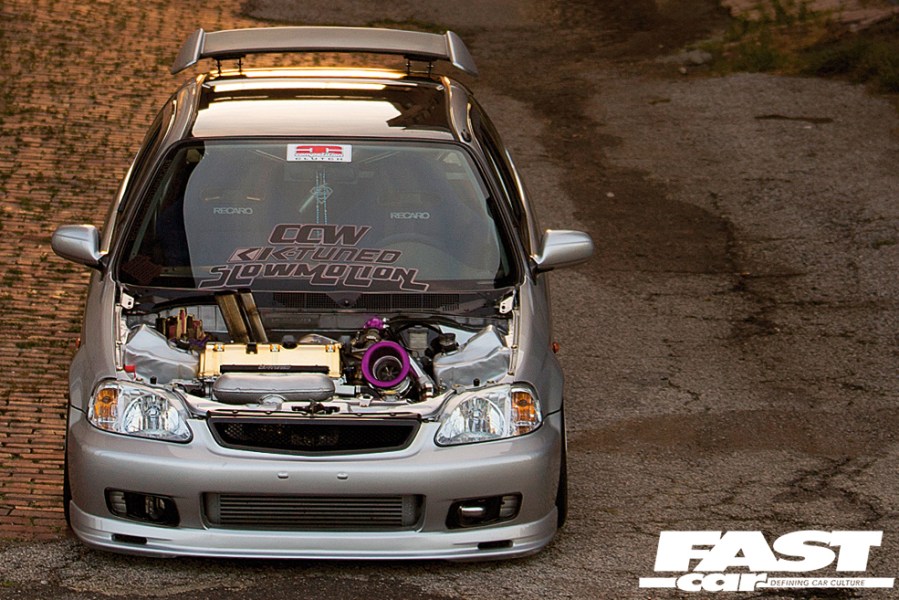 Welcome to this week’s FC Throwback, where we take a look back at some of our favourite previous feature cars. This week it’s Steven Youhana’s tuned Honda Civic EK from back in 2014…

Unlike Hollywood blockbusters, real life stories don’t always have a happy ending, but Steven Youhana, who grew up down the road from Tinseltown, is determined to ensure his does.

I feel I should start this feature with a minute’s silence, but that’s rather hard to portray in writing, and may be a touch boring to read. So I’ll let you all offer your own personal sympathies, in whatever way you deem appropriate. You see, the beautifully crafted, horsepower gifted, four-wheeled masterpiece that is displayed before you, is no longer with us. The Civic is dead – its life ruthlessly swiped away by a freak accident on a nasty stretch of American highway. This makes me very sad. Not even a series of colons followed by open-brackets will suffice in such a tragic situation (think he means a sad face – Jules). Gutting.

Steven Youhana, the owner and creator of the vehicle in question, has a totally different opinion on things though, absolutely refusing to waste any time squandering in self-pity. In fact, he is the kind of guy that can find the silver lining in even the most sizeable and angry looking of clouds.

The accident that spelled the end of an era with the Civic, became the starting block for an even more incredible project – the perfect example of his outstandingly optimistic attitude. But more on that later!

It was late last year, on a lunch break from work, when three vicious bumps caught him by surprise, snapping the ball-joint clean out of the Civic’s off-side suspension arm. With the steering wheel now all but useless, Steven was merely a spectator as the car played pinball with the barriers on either side of the three-lane highway. “Surprisingly I was not upset when it happened”, he tells me casually. “It was totally out of my control so I couldn’t blame myself. It was just one of those things.”

It happened at arguably the absolute pinnacle of a four-year build, within which Steven had gotten the car to that illusive point that a lot of us project car addicts long for – completion. He was totally happy with every aspect of the car, down to the last detail, and was just enjoying driving it as often as possible, which in his words was, “Everywhere, all of the time.”

It went through two other main phases before it reached this point, always built around the oily bits sitting in the front. It started with a turbo’d B-series which was later swapped for a built, but naturally aspirated K-series lump. He was fond of both setup’s in different ways, and it wasn’t long before he decided to have his cake and eat it, throwing together a K20A2 powerplant (from a DC5 Integra), only this time with a whacking great snail attached.

“I’ve always had Hondas”, Steven explains. “My first car was a 2000 Civic Ex, back in 2002, but being young and irresponsible I totalled it during a street race.” Obviously not long after being bitten by the Big-H bug though, as every vehicle that proceeded it has displayed the little red emblem on its nose. Another 2000 Civic followed, this time an Si, which Steven tweaked and fettled into a very competent naturally aspirated little hot-hatch. It was more than capable of holding its own against a lot of expensive machinery in his home town of California – more specifically the bigger boys with lots of boost. “I hated turbo’d cars at that point in my life”, he laughs, “all I wanted to do was build NA cars that gang-banged on turbo’d ones!”

Tiring of its relative unreliability, he ended up breaking the Civic for parts – although the fact it was emptying his wallet quicker than he could get to work to re-fill it, may have played a part as well. A little later he acquired an Integra shell and engine that’d been built with forced induction in mind. He saw little point in ripping it apart and starting again, so decided to boost it, throw it into the empty bay, and see what all the fuss was about. “I fell in love. Simple as that.” He says grinning. Now he understood!

“I bought the hatch as my last project. I called it my last project as I was expecting to keep it for the rest of my life. My hot rod.” But he goes on to complain how modifying in California was getting harder and harder, as the powers-that-be imposed tougher legislation to try and crack down on illegal street racing. Eventually he moved to Ohio to be closer to his mother, but that also allowed him to go a bit crazier with his build. Sadly, his mother passed away in December 2010, which only served to motivate him to get even deeper into the car-scene he loved so much.

“It was a real turning point for the hatch. My two brothers were always getting into trouble and it really stressed my mom out. I vowed to look after her and keep out of trouble myself by building cars.” So after her death he was left with just his cars, and determined to stand by his promise he had to step it up a level.

It was around this time that he met a lot of his current closest friends, all of whom share the same brand infatuation. It is the perfect peer-pressure-pumped social group, each of them striving to one-up each other over and over again, yet always having a great laugh, and helping each other out whenever necessary.

“Somehow we all build wild Hondas.” Steve tells me. “It’s a never-ending, awesome battle, and I wouldn’t have it any other way!” Neither would we, when the outcome is something as extraordinary as the Civic. Just scan your eyes over the spec list, it really is an eye-wateringly amazing list of parts. Making them all work together in such a complete, capable, yet still somehow unpretentious package, is a massive accomplishment on Steven’s part. From the immaculate, big power engine, to the subtle, but sweetly styled exterior, word’s simply cannot sum up the epic-ness of this machine, so I shall leave you instead to salivate over Joe Coville’s stunning photos.

So what of the new project that I mentioned earlier? Given Steven’s current track record it ought to be something pretty special, right? Well for now you’ll just have to trust me when I say, with ultimate conviction, that yes, yes it is.

We at FC Towers may have been slightly delayed in securing the scoop on this outrageous EK, but we are right at the front of the queue to get its replacement in print. So keep your eyes peeled, it is coming very soon, and you really do not want to miss it.
The King is dead. Long live the King!