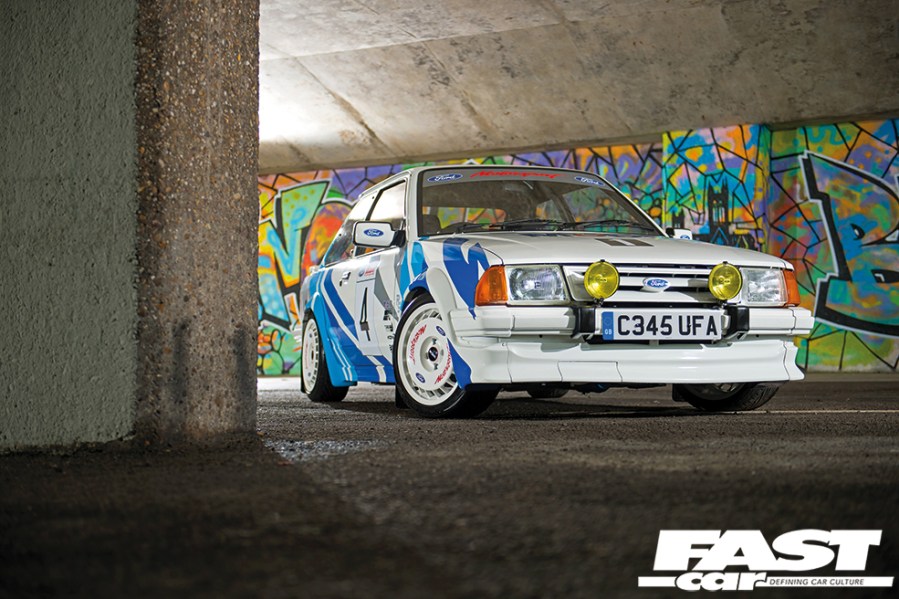 Everyone remembers what car their driving instructor had, it’s an instrumental part of all of our formative motoring experiences. Most likely it was a poverty-spec hatchback, all scratchy interior plastics and scuffed hubcaps and dual-controls, something chosen to be functional and utilitarian. Not a car you’d fall in love with, but merely a tool to educate, a means to an end. We’d wager your instructor probably didn’t have a tuned Ford Escort RS Turbo Series 1 with tiger stripes… 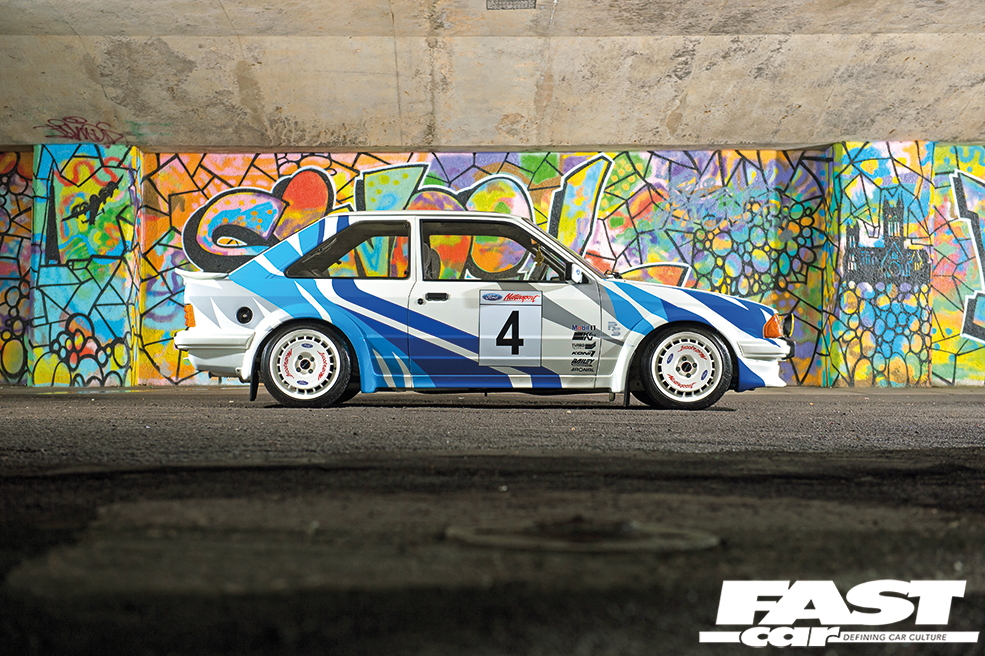 Now, we have to point out that Thomas Ross doesn’t take his students out for lessons in this RST, it’s not his work car. Makes quite a statement though, doesn’t it? After a hard day of explaining biting points and wheel-shuffling, an old-school hot hatch is quite a way to unwind. It all makes perfect sense really, as these cars have been under his skin since day one: “I always had an interest in cars from a young age, and by my teenage years I had a particular soft spot for Escort RS Turbos,” he recalls. “It was the car I wanted but, like many, I started off with an Escort Eclipse which was shamefully modified… imagine it, a four-door Escort with an RS bodykit, bonnet vents and whale tail, with heavily tinted windows! But that was back in ’97 when curtain hairstyles and loose-fit shirts were a thing, I’m still convinced to this day I had street cred back then. When I owned the Eclipse it was more about cosmetic modification, it was all about ‘the look’, especially at 17. However, over the years I owned various makes of cars that I modified and gained more knowledge about what was under the bonnet and all the mechanical aspects, even turning to a motorbike for a short while.”

Having slipped out of the Ford scene for a time, it all came flooding back when Thomas reached his early thirties and found himself presented with the opportunity to buy a Series 2 RS Turbo. This was back in 2012, and it became a rolling restoration of passion and frustration in equal measure, with endless dismantling and replacing and upgrading; it was all essential experience though, every step helped to build mechanical know-how. “By this point I also had a custom-built garage of my own to work in,” he recalls, “so it was the ideal time to invest in the car I’d always wanted to purchase: the Series 1 RS Turbo.” 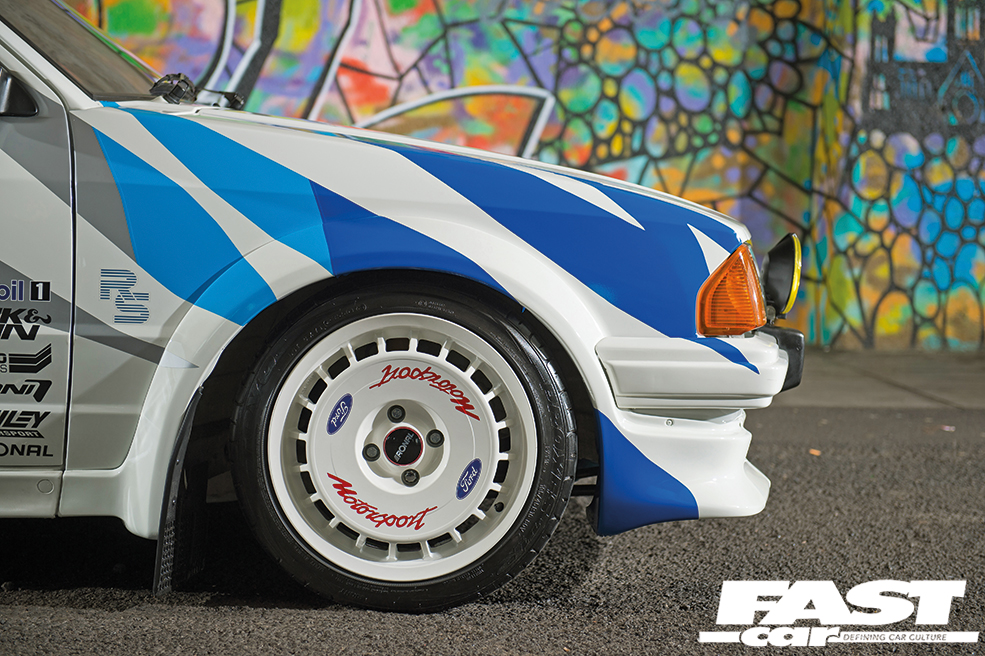 Spending the best part of seven years elbows-deep in the S2, Thomas was more convinced than ever that the RS Turbo was the toy for him, and his affections were moving increasingly toward the idea of an S1. He had a clear idea of what he wanted, too – this would be no restomodded ZVH mutant, he wanted to keep the CVH with its stock KE-Jetronic setup and see just how far it could comfortably be stretched. And when a friend, Mark, sent over details of an S1 for sale on Facebook, Thomas was all over it. “I don’t think he actually expected me to go and buy it,” he laughs. “I’d seen the car previously at a local Lincs Ford Group meet so I was aware of it, but that was some time ago. It had been off the road for a while, hidden away; upon viewing it, I could see potential to carry on what the previous owner had already started, which included my favourite modification aspect – the tiger stripes! They initially drew me to the car, and I just had to have it.”

We don’t blame him. Those guys at Turbosystems back in the day have a lot to answer for, they created a culture of outrageous blue-and-grey decals that’s indelibly etched in the affections of any Ford fan who grew up modding in the eighties and nineties. The coolness has come full circle, we can’t get enough of the look these days. No wonder Thomas was instantly hooked. 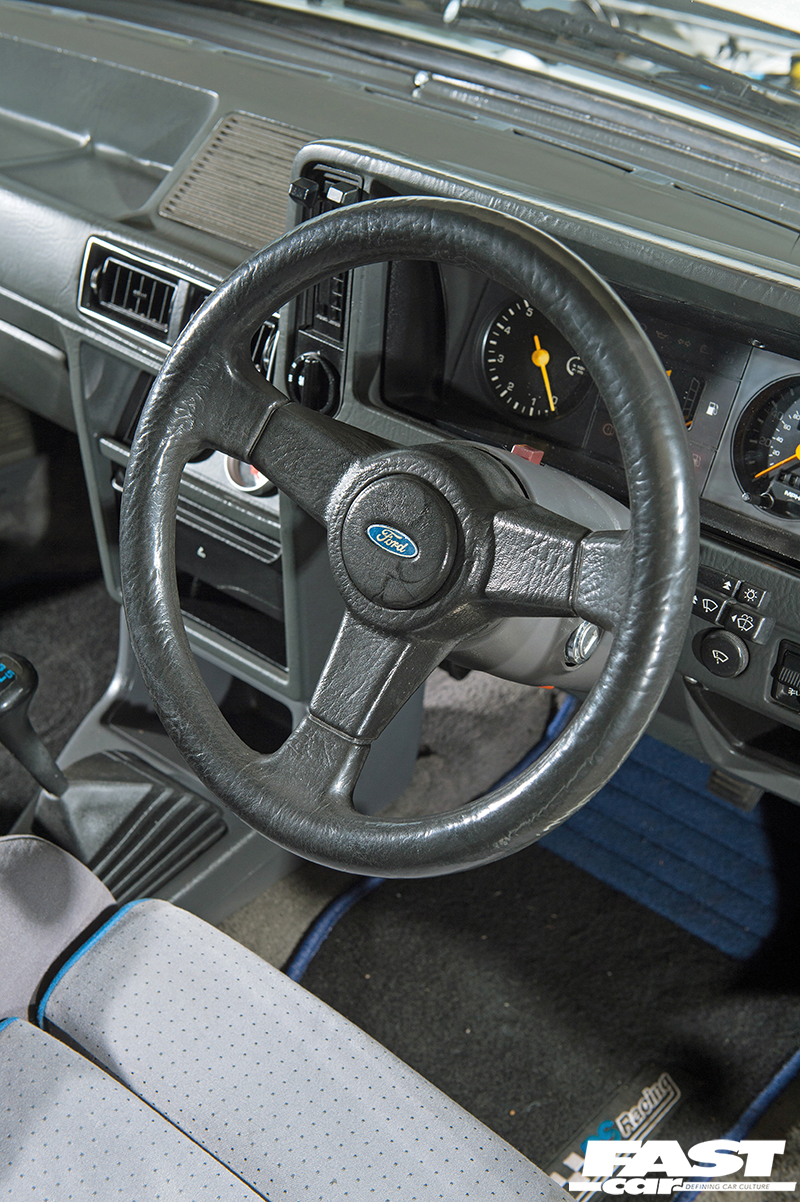 It wasn’t just about the stickers, of course – it helped that this was a decent car, and he knew what he was getting himself into: “When we got it back to my garage a week later, I went over everything while stripping it down,” Thomas recalls. “The owner had been honest about what was needed to get it finished in his mind, and that’s where I started. As my journey continued with the car it became clear that there were plenty more adjustments I could make in order to enhance its performance, as well as ensuring that everything was in the right place and working correctly.”

Sitting fairly high up the to-do list was the engine, as Thomas had heard it prior to purchase and something was clearly amiss (“like a plumber’s toolbox falling down the stairs” is how he describes it…), so he coaxed Ian Howell from FWD Ford specialist Area-Six round for a cuppa and gently cajoled him into stepping into the garage. 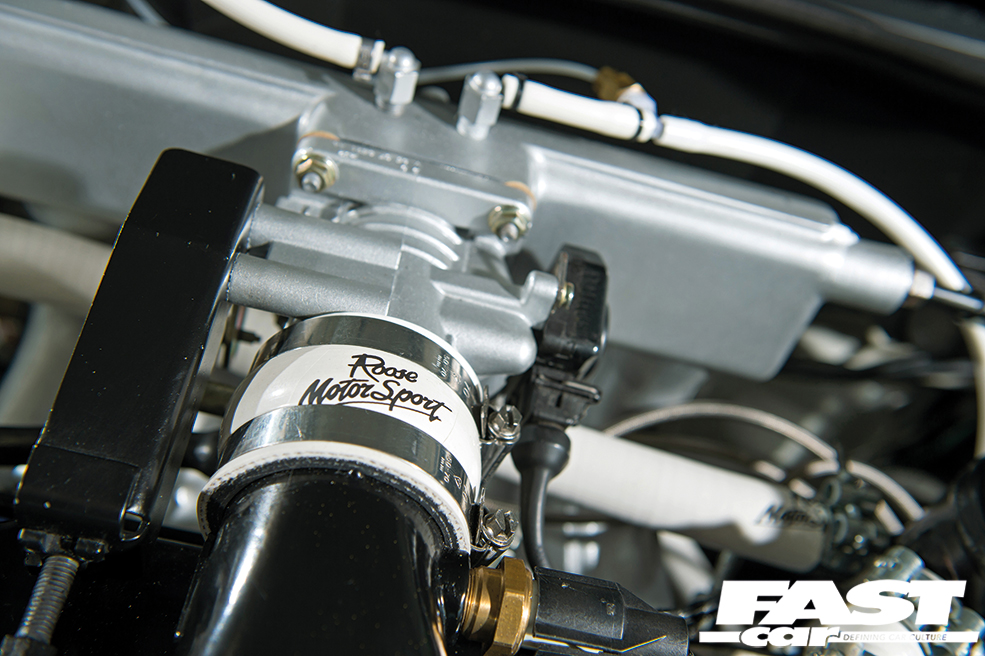 “The first job was to tackle the solid followers, as I couldn’t bear the sound of it idling, resonating like a bag of nails,” says Thomas. “The adjustable lifters hadn’t been set by the installer, most had over 3mm clearance rather than 0.3mm. Ian tweaked them to the right setting, and once started it actually sounded quieter than my S2 hydraulics, which was a total transformation! I could actually hear the exhaust note for the first time. I still had the haze of smoke on start-up to tackle next, and after further inspection and unbolting the exhaust manifold I found three of the four exhaust valve guides had oily tar in the ports – I knew it would only get worse.”

Each one of these minor crises is really just an opportunity in disguise, and with the head removed Ian worked his Area-Six magic with bronze guide liners inserted, porting and polishing the head to its full potential, matching up the inlet injector plate, and completing various other conjuring tricks to complement the Newman Phase 4 cam. The next logical restriction in the system was the stock 0.36A/R turbine housing, and Ian advised replacing it with a 0.48A/R to flow the gases out as quick as the air was coming through the newly reworked CVH head. 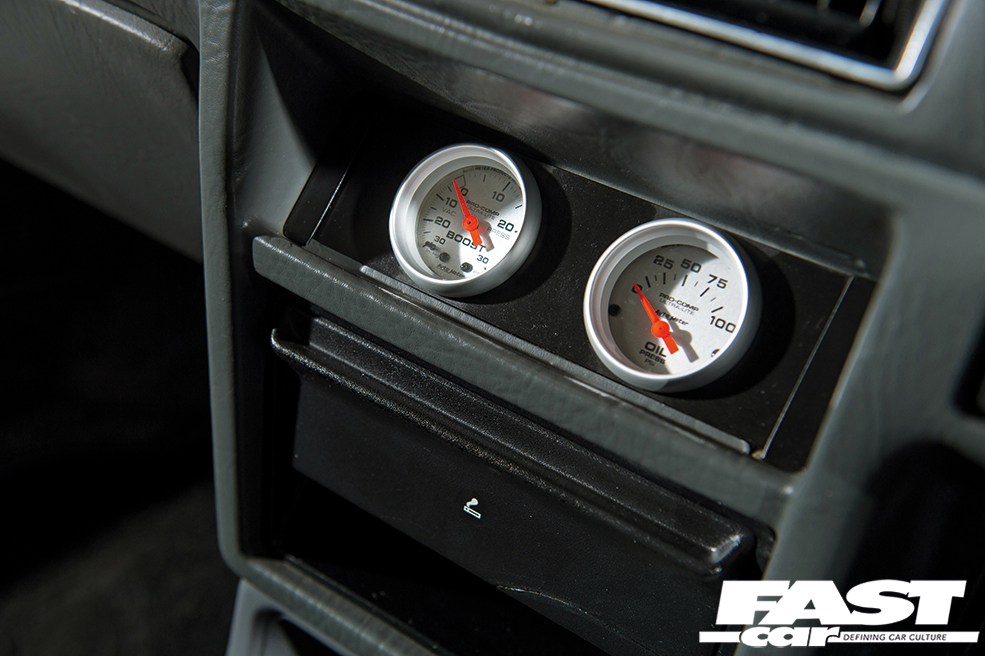 While all this was going on, Thomas had been giving serious consideration to transmission too. He’d learnt his lesson with the S2 that a 4-paddle clutch, while hardcore, can somewhat reduce driving enjoyment in day-to-day scenarios, so he mated a Helix 6-paddle to the stock LSD ’box so as to cover all bases.

“When the car was all put back together, I took a trip with it to Motorsport Developments in Blackpool,” he continues. “After diagnosing a few nightmare electrical issues, it churned out 195bhp on their dyno on a standard ECU with just 10psi. That’s right, the ECU is not even chipped! Stu at MSD said ‘The KE-Jet is on its knees, this is as good as KE gets while still retaining good cruising fuelling’. Looks like I’ve achieved stretching the KE-Jet system to its max! Chipping the ECU and running the usual 1-bar boost is pointless at the moment, as the reworked CVH head and turbo combination would require additional fuelling from either a mappable 5th injector or standalone management ditching the MFI, but I’m very satisfied with where it is now. For me it’s quicker and more aggressive than my S2 that’s running the usual 1-bar boost and all supporting modifications!” 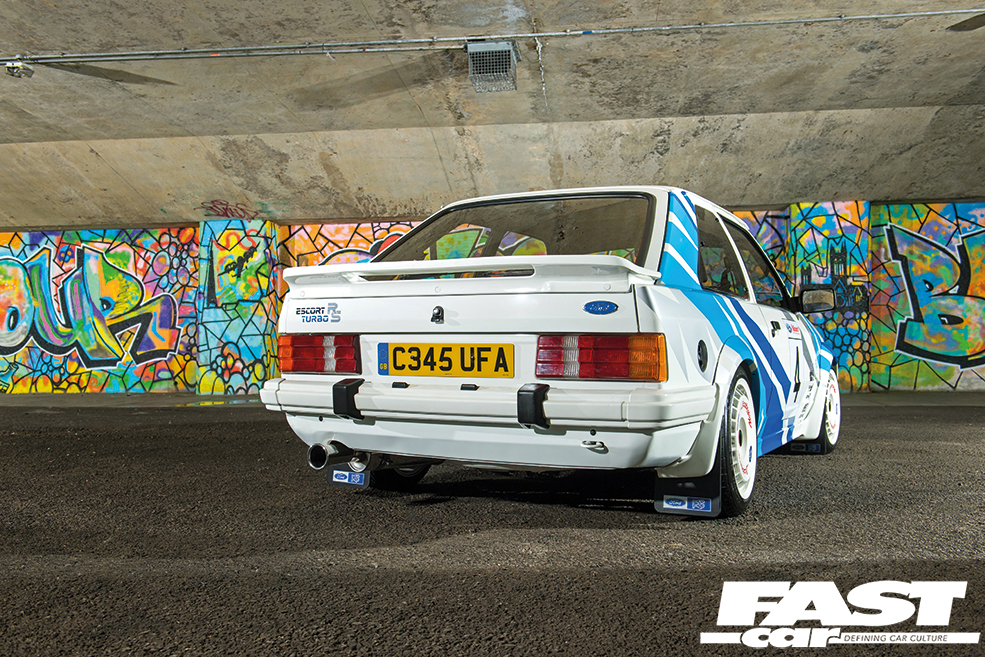 Naturally a car with such a retro approach to tuning should have all the classic upgrades below the skin to help it reach its full potential, and you wouldn’t be disappointed if you put it up on a ramp and had a poke about underneath: it’s sporting Cosworth 4×4 brakes, Koni adjustables with 60mm springs, adjustable TCAs, all the right bits that would have made you a hero of the seafront cruise back in the Britpop era. And those OZ Racing wheels are just period-perfect, aren’t they? (OK, they’re actually Ronal Aero R50s wearing Ford Motorsport graphics, but the effect itself is fully authentic.)

“Like with my S2, I intend to use the car wherever I can and as much as possible, not to have it tucked up in a heated garage rarely seeing the light of day,” Thomas assures us. “Peoples’ reactions are always positive as well, followed by shock when they find out I’m a driving instructor by profession with two RS Turbos! I’ve had people taking photos when out and about, even changing lanes to get a side shot, beeping their horns, and I’ve had so many thumbs-up I’ve lost count.” All of which would be an instant fail on your driving test of course, but let’s not split hairs. As driving instructors’ cars go, this is just about the coolest we’ve ever come across.