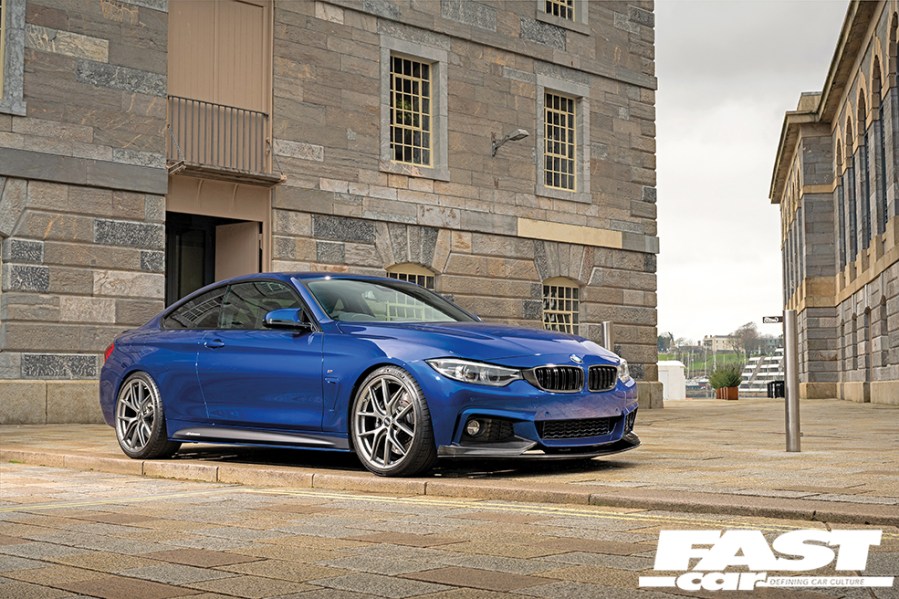 Finished in stunning San Marino blue, sitting on BBS 20s, and pushing out almost 650hp this tuned BMW 440i is an epic machine that’s been taken to the next level.

When it comes to BMWs, there is a question: why buy X, Y or Z when you can buy M? It’s a question we put to Mark Tucker (@mark_bmw_t) when he sent us pics and specs of his gorgeous tuned BMW 440i. It’s a valid question, we weren’t being rude, because why buy a non-M and then proceed to spend so much money on it when you could have just bought an M in the first place, and had the pinnacle of the range? Well, turns out that’s exactly what Mark went shopping for, but things didn’t quite work out like that…

We should say that this isn’t Mark’s first time behind the wheel of a BMW, and he’s been a fan of the brand for a long time now. “My first BMW was a stunning Atlantis metallic E36 328i Sport Individual Coupé, which I went to view with a friend who ended up buying it. I ended up buying it off him a couple years later,” he grins. This was followed by several other Bavarian beauties including a manual E46 M3 in Phoenix yellow, an E92 335i, and an E46 325Ci convertible, so Mark is clearly a big BM fan with good taste to boot if that wasn’t obvious from his current choice of car. 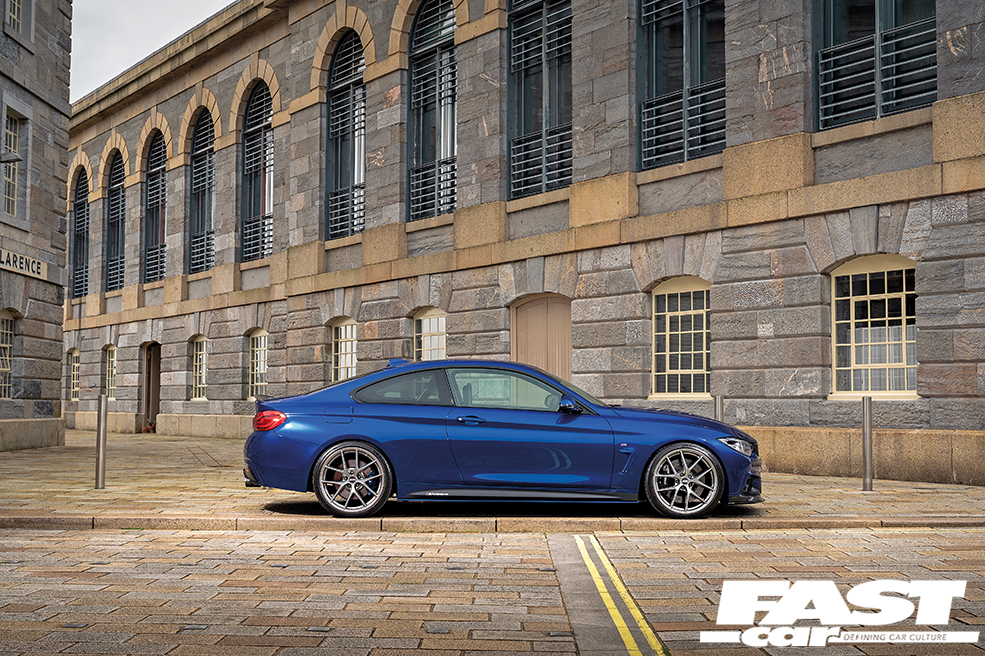 “I went to my local BMW dealer to look at a two-year-old Mineral white M3,” explains Mark as he tells us the story of his unexpected purchase. “Inside the showroom was this stunning, brand new, San Marino blue, Individual-spec F32 BMW 440i Coupé. The colour was incredible, with a massive spec and options totalling over £12k,” and suddenly his clear thoughts of an M3 purchase were rather muddled. “Honestly, it was love at first sight. As soon as I saw this car in the showroom, I felt like it had my name all over it! For whatever reason, the M3 just wasn’t for me, and the 440i had my attention more, and the colour is a real attention stealer,” he enthuses. However, Mark couldn’t bring himself to make a decision there and then as he’d had his mind focused on an F80. “I ended up leaving, not knowing what to do, as I was expecting to get the M3. I went back to work, and a couple hours later, Emma, my wife, called me saying she made the decision for me and ordered it!” he exclaims, and that was definitely the right decision here.

“Before collection day, I told Emma I had no plans to modify the car, and it was to stay standard,” says Mark, but we all know how things go whenever anyone says something like that. “The following week, it was back to my local dealer having a full carbon kit and the M Performance Power and Sound kit fitted,” laughs Mark. “Not long after, it was back in for the M Performance side skirt extensions, which were colour-coded at the BMW workshop,” he says, and with that, the project was well and truly underway. 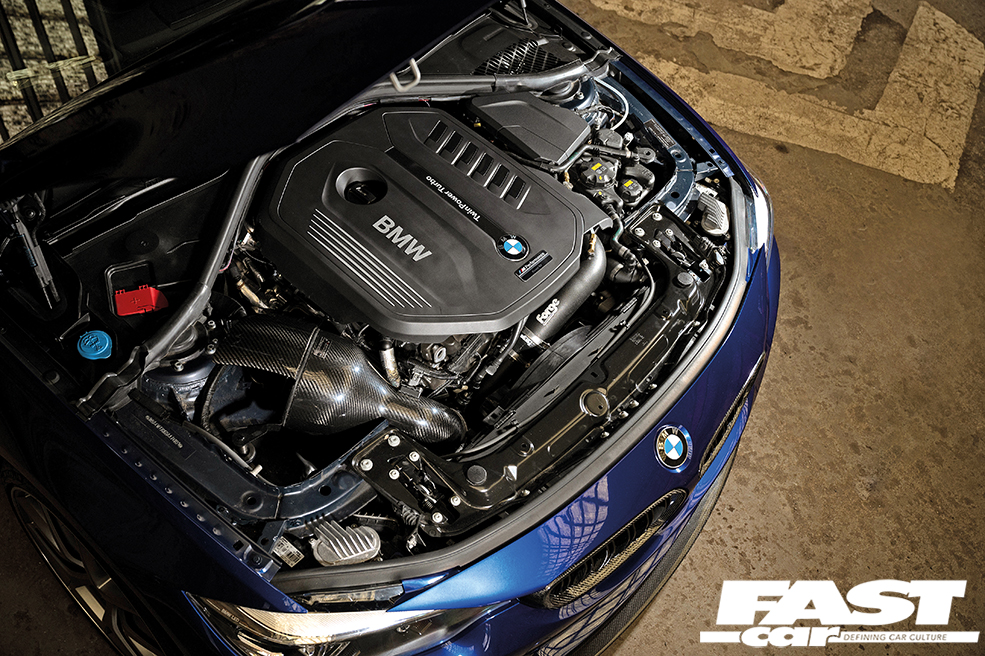 If you’re shopping for an M car and end up buying something that isn’t an M car, that something has to be pretty special, but we totally understand why Mark fell for his 440i the moment he saw it. We cannot accurately express our love for San Marino blue with words on a page, but it’s one of our favourite BM colours of all time. It’s just dazzling, such a rich, deep, vibrant, intense blue, and it looks amazing in any light and instantly makes any car immeasurably more desirable. It’s pretty irresistible, to be honest.

The 440i may not have the fat flared arches of an F80 M3 or the sheer girth of an M4, but this example isn’t lacking in the looks department one bit, and the M Performance carbon kit makes a big difference to how much road presence this F32 serves up. Up front, you’ve got that aggressive splitter along with the corner splitters, and together they look awesome, while at the rear sits the boot lip spoiler, and we love Mark’s decision to get the side blades colour coded. These enhancements are joined by carbon grilles, and Mark has also added a pair of genuine M4 mirrors, a subtle but purposeful addition, while a matt black M Performance diffuser fills out the rear bumper. All these elements combine to enhance the 440i’s styling, and while it definitely has a sense of presence and menace about it, it’s still subtle and works so well. 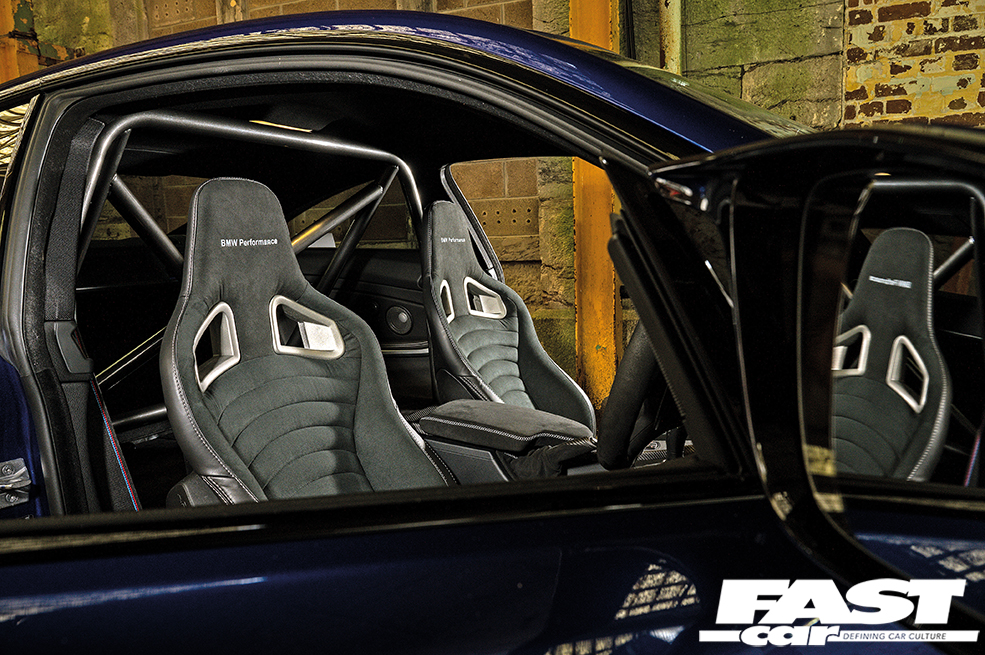 Looks are just one very small part of this build, though, and the really impressive stuff resides under the bonnet, and the B58 has undergone some serious upgrades. In standard trim, the 3.0-litre single-turbo straight-six makes a healthy 326hp, plenty to be getting on with and enough for a 0-62 time of five seconds dead. Mark has already told us that he wasted no time in adding the MPPSK, which bumped power up to 360hp, and he followed this up with an Eventuri intake, but it just wasn’t enough, and he was hungry for more. And when we say more, we mean a lot more.

You can’t see it because of all that black under-bonnet plastic, but strapped to the side of the B58 is a Pure 800 Stage 2 turbo, which is enough to tell you that this tuned BMW 440i is not messing around, and it is joined by a seriously impressive supporting cast. There’s a Forge aluminium charge pipe, a CSF heat exchanger, a Dorch Engineering Stage 2 HPFP kit, NGK spark plugs, a Stone Eddy cat downpipe, meth injection, and it’s all topped off with a bootmod3 and a Paul Johnson custom map. That’s a serious amount of work that’s gone into the engine, but it yields serious results, with no less than 647 thundering horses now on tap, and that puts this tuned 440i firmly in the realm of the supercar. It might not look like an M4, but it packs substantially more power into a subtler package, and there’s a lot to like about that. 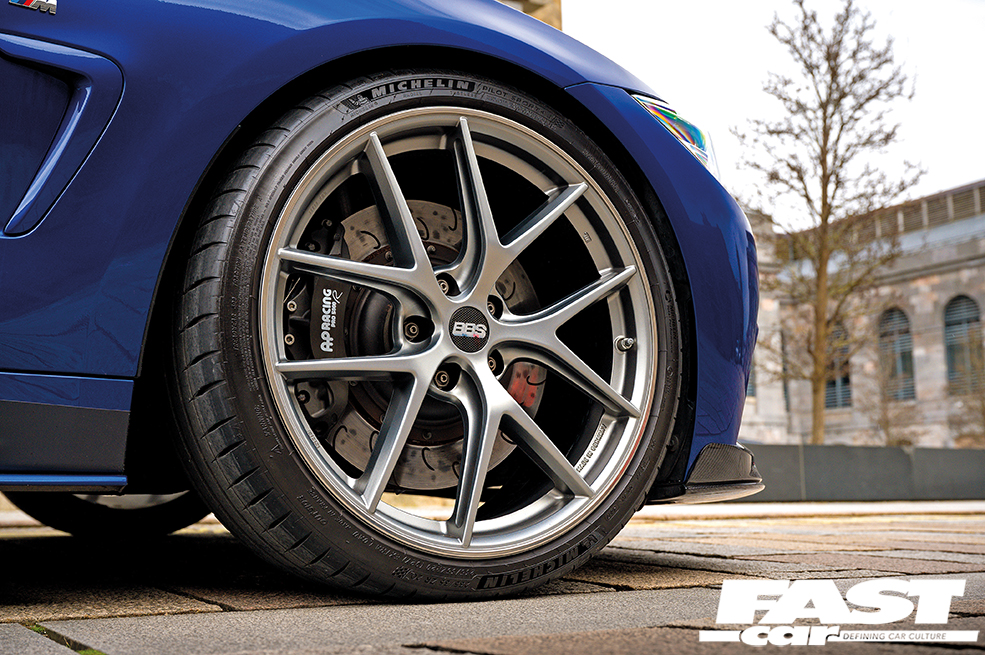 This F32 continues to impress with what you can’t see when we turn to the chassis. You can see it’s sitting low, so you know the suspension has been upgraded, but Mark has done so much more, and this is a seriously impressive setup. Öhlins R&T coilovers have been fitted, and not only have they got the 440i sitting perfectly, but they have also instantly upgraded the handling and make this F32 a completely different machine to drive. They are paired with Millway adjustable top mounts, uprated H&R front and rear anti-roll bars to further enhance the handling, and on top of that Mark has added a whole host of SPL parts. You’ve got front and rear ARB drop links, rear top camber arms, front and rear arms, toe links, and wishbone and tension struts, all of which has removed any slack or slop from the chassis. This has resulted in a car that’s incredibly sharp and responsive, and a chassis that is more than capable of handling the massive power hike.

Of course, there’s still the matter of being able to actually put all 647hp down, and without an LSD from the factory that was something the tuned BMW 440i was always going to struggle with, so Mark has added a Quaife diff from Birds that ensures none of that horsepower goes to waste. Going fast is one thing but you still need to be able to stop, so the F32 is now equipped with an AP Racing Pro 5000 R BBK up front, which delivers serious braking power, and the massive disc and caliper combo is easily visible thanks to the widely spaced spokes of the BBS CI-R wheels. Not only do these 20s look good, but they also offer far more than just style thanks to their lightweight flow formed construction and back-milled spokes, and they sit on a set of PSDesigns titanium studs. 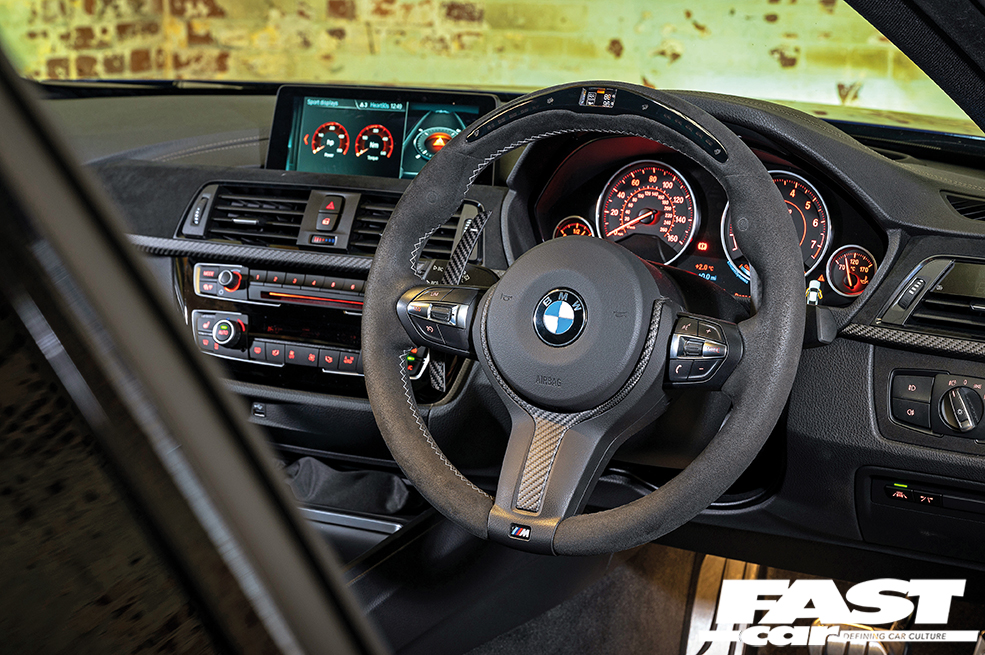 Finally, we come to the interior, and Mark has not been shy with the mods in here either, and the cabin now feels like a seriously special place. The BMW M Performance catalogue has been raided, and some choice mods have been added, with the full trim kit, which adds gorgeous Alcantara and matt carbon across the cabin. It is joined by an alloy pedal set, carbon door sills and even a set of M4 Competition seat belts, complete with M tricolour stitching. That’s all very impressive, but we haven’t even got to the really good stuff yet.

Ahead of the driver sits an M Performance steering wheel with Alcantara rim and digital display plus AutoTecknic carbon shift paddles, there’s a P3 digi vent gauge, and then there are those seats. “I had the opportunity to get hold of a set of BMW Performance seats from AMX, which are amazing. I’ve always wanted a set since owning my E46 M3,” says Mark and they look absolutely stunning. “I installed a rear roll-cage from SW Motorsports and fabricated a rear seat delete, which myself and Emma trimmed in Alcantara, complete with PSDesigns fire extinguisher bracket and BMW extinguisher,” he adds, and these impressive finishing touches take this interior to the next level. 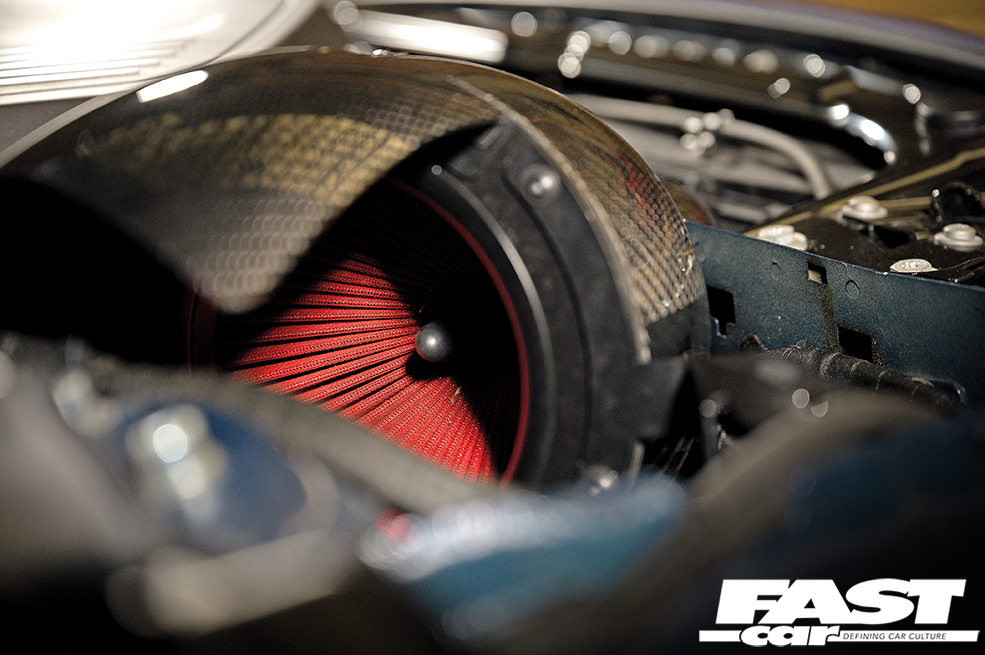 Everything about this tuned BMW 440i is simply awesome and it blows any doubts or questions about choosing this over an M4 out of the water. Mark has built himself an epic machine, he’s got massive power on tap, an incredible chassis, it looks so good and that interior is the perfect finishing touch. This is a build that really ticks all the boxes, and Mark can be very proud of what he’s put together. But he’s not done yet, oh no, there’s still plenty more on the cards for this monster 4 Series…

“Since I purchased the car new in September 2017, modifications have been constant and ongoing with lots of plans for the future. I have the rear AP Racing 5000 R brakes but am waiting for rear bells to be fabricated by Reyland Motorsport before I install them. I’m also awaiting delivery of the CS-style bonnet, and after lockdown, I would like to get over to Alpha-N for a carbon roof install,” he says, and those mods are going to make this F32 even more spectacular. 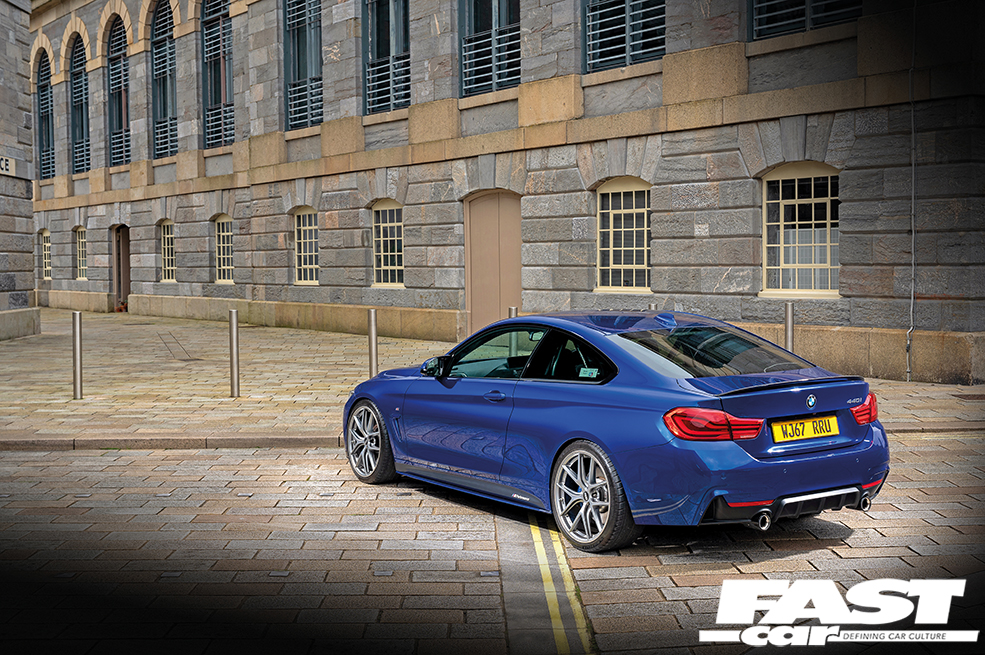 While temptation lurks at every turn, Mark isn’t ready to let his 440i go just yet. “I made the fatal mistake of test driving an M850i, and my local dealer found the perfect car with all the options and everything was sorted. All I had to do was sign, but I pulled out and decided I couldn’t get rid of mine,” chuckles Mark, and we don’t blame him. This 4 Series is truly in a league of its own.