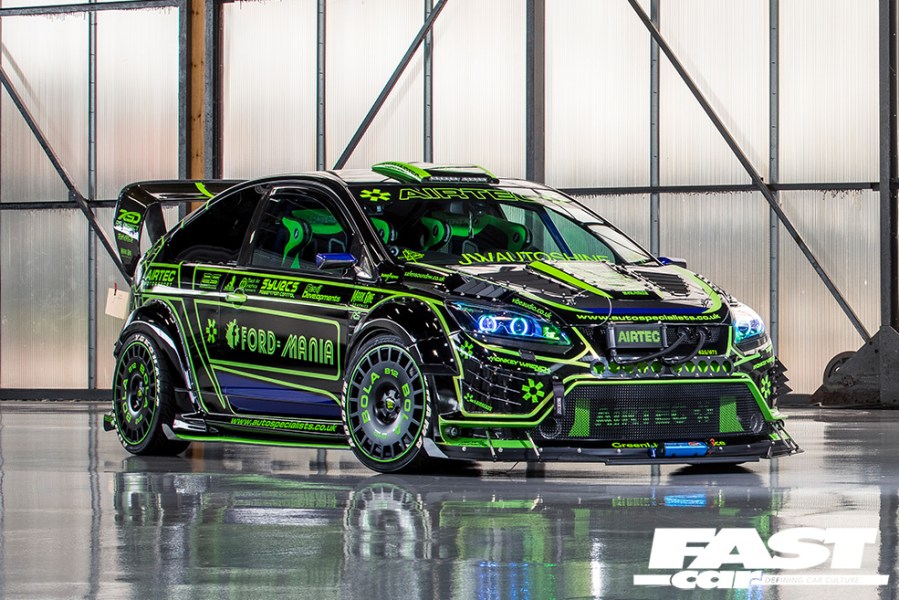 Well, then – where do we start with Rich Fox’s Mk2 Focus RS? Winner of Fast Car magazine’s 2018 Car of the Year. It’s a polarising car, that’s for sure… it couldn’t be more love-it-or-hate-it if it had been carved from solidified Marmite, and that’s just what we love about it. It’s completely shameless, unselfconscious, no-f**ks-given, it exists solely to amuse its mischievous owner. What’s particularly noteworthy about this distinctive project is that it represents the zenith of the current tuning scene – or, perhaps, where the scene will be in a couple of years’ time.

You see, back in the 1990s and early-2000s, brash was best; every car in the cruise had a massive fibreglass bodykit, the biggest wheels that could physically be squeezed on, insane audio installs, the works. Through the late ’00s and early 2010s, this gave way to a cleaner, crisper, Belgian-inspired OEM+ vibe, subtlety ruled, although we’re now seeing a significant resurgence in wide-arch ostentatiousness and wheel obsession. Where do we go next? Rich Fox reckons you’re looking at it. “I wanted to hit 2020 modifying early, and I think I’ve achieved that,” he laughs.

If you’ve been to a car show in the last few years (pretty much any show at all, to be honest), you’ll have seen Rich there in his ever-evolving Focus. Or if you didn’t see him, you’ll have certainly heard his Section 18 exhaust ricocheting like artillery fire across the showground. And if you’re a reader of our sister mag, Fast Ford, you’ll have seen this black-and-green monster on the cover in January 2017.

Back then the 671bhp brute was running gold wheels and slightly less extreme aero, but under the skin it was a very different car indeed. The project’s changed so much since our chums on the other side of the office got their hands on it – Rich is a one-man modding machine, he’s addicted, obsessed, he can’t leave the damn thing alone. Sure, he had the country’s most extreme Focus, but he needed to push it further.

“Around the time of the Fast Ford cover, I was also getting a lot of exposure from the RS’s appearance on Jamie_FYD’s YouTube channel, and the car went viral very fast,” Rich explains. “By that point I had hit the limits with car parts you could get off the big companies, so I stopped modifying and enjoyed the car for a little while, showing her off at as many shows as possible. I’m a very big fan of one-off cars and extreme bodykits from back in the day, and there wasn’t really much of a scene for that any more – but I had a vision of what I wanted to do. And I really pushed this vision after Trax 2017, as the RS was getting tired from all the hard use and needed restoring. I listened to one comment on social media when someone said ‘Ain’t we bored of this car yet?’, and I thought ‘Yes, I bloody am’.”

So Rich, being Rich hightailed it back to the Isle of Wight and, the Monday after Trax, the tuned Focus RS Mk2 was stripped down and lying in bits strewn about his garage. While he pondered his next move, he got on the phone to Bola Wheels to see if they’d be willing to make him a set of B12s in a 19” diameter, which they were happy to do, and this acted as a real shot in the arm for the project.

“After that, the RS went to John Russell at Lake Autocentre for a complete engine rebuild, which was so impressive when complete,” says Rich. “Even the engine block was a beautiful lime green! And when the car was back in my garage with a fresh new engine, I started getting contacts from people that do one-off custom parts. These are guys I’d been watching all through the years and I knew they would help me make something totally stupid!”

The cast of characters included Kevin Johns at MRM Speedshop, Gary Howard of Carbon Addicts, Richard Pryce at SS-Tuning, Kuro Carbon, and Ross Parking at RP Panelling, all of whom had their part to play with bespoke craftsmanship, and when it came to the heavy-duty work Rich enlisted Martin Goddard at MJG Grits to set about cutting arches, making custom seat brackets and external oil cooler brackets, attaching the mighty front bumper, and building that huge rear diffuser which is so strong you can actually use it as a work bench!

“With all the stripping down, I managed to remove 255kg of weight, as the RS is a heavy old lump,” Rich grins. “I was working on panels of the interior while the engine was being rebuilt, so it was a case of putting the puzzle together; I love my sound systems and I knew I would get bad comments if I put big ICE in, but with everything I removed from the car or cut off or replaced with carbon fibre, it works out that it’s still lighter than a standard RS! So I can enjoy ear-bashing music while being lighter and faster than it was before. I chose Vibe Audio equipment because these guys are always helpful with advice, plus their speakers are so bloody loud with top quality. It was a bit of a mission building a huge system around the Jamsport rollcage, but I managed it!”

The exterior aesthetic has been a real labour of love too. Aside from the frightening aggression of the WRC front bumper and rear spoiler, the roof scoop, the crazy aero and all the carbon, it’s the livery that provided the real head-scratcher. It took Rich four months’ worth of evenings to design it all up perfectly, before he could send all of his precise measurements to Mark Chamblin at Mark One Graphics. But that’s emblematic of the build as a whole, really – no stone has been left unturned, and Rich insists on perfection. It’s not to everyone’s taste, but it’s what he likes and that’s the only thing that matters.

“After nine months of crazy hours and crazy work – and to be honest, some of this stuff shouldn’t have worked! – me and my mad team have created something the likes of which you will never see again,” says Rich. “This car was created with so much time and passion, you can appreciate every part of it individually.” Which provides the perfect fusion of then-and-now Ford tuning: this guy wanted to create something so extreme, so out-there, that it’d set a template for the near-future of modifying.

But at the same time, he’s tapping into the desires that have made modifiers tick for generations. Rich’s car has a lot of admirers. It also has a lot of detractors – but so did Carisma’s TVR Cerbera, and Max Power’s Project Thunder, and Mattias Vöcks’s Volvo Amazon… without mould-breakers, the scene stagnates. We need cars like this Focus. The madder the better.