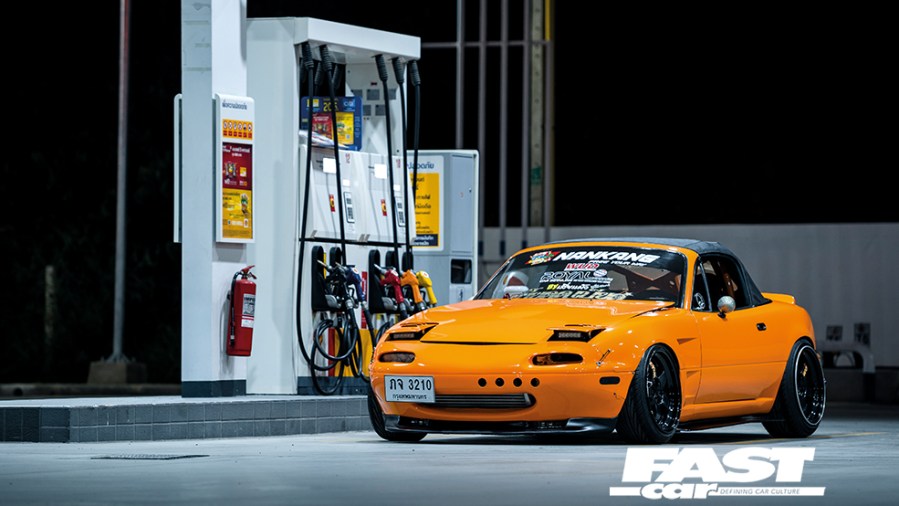 The MX-5 owners’ club may not be at all happy with what Nattawut Aupaiboon has done to his little roadster. With a 420bhp SR20 engine under the bonnet of his Mazda MX-5, he’s having too much fun to care…

Some cars are untouchable. Or so people might have you believe. That’s what makes it so much fun when you see some of the outrageously mischievous builds that have been doing the rounds in recent years, like the Bentley Continental GT that’s been turned into a tube-frame dragster, Ryan Tuerck’s GT86 drift car with the Ferrari 458 engine, the R34 Skyline which appeared in sister-mag Banzai with a 2JZ motor… some people just like to shake things up. Build cars simply for the hell of it, embrace the hate, no f**ks given.

OK, so maybe the first-gen Mazda MX-5 isn’t quite in ‘untouchable’ territory just yet, but it’s getting close. There’s still oodles of them on the scene having cool mods lavished upon them, and there’s a thriving aftermarket; we’ve been keeping a keen eye on the classifieds though (y’know, for… reasons) and the days of picking up a cheap and ready-to-roll NA MX-5 for comfortably under a grand are well behind us. You can still pick up a decent one for, say, a couple of bags, but then you’ll probably end up having to weld in new sills and deal with the rot in the rear arches, and the rear calipers will most likely be sticking, and… well, they’re 1990s cars, and the nineties were a while ago. This is the reason that values are creeping up. If you want one, we reckon now’s the time – they probably won’t ever be cheap again. 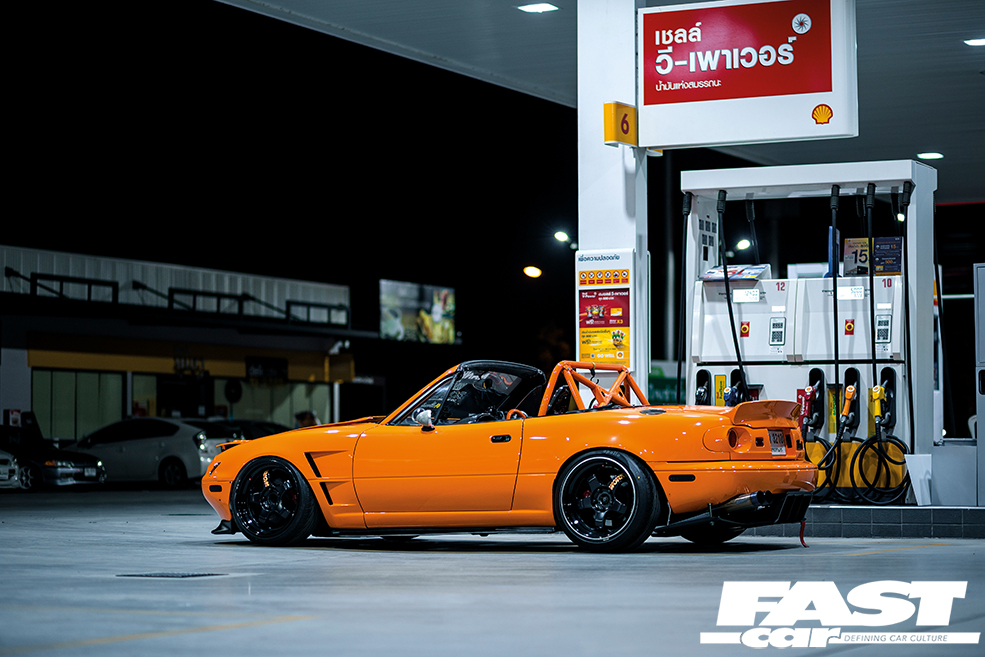 With all that said, it’s especially cool when we see early Mazda MX-5s breaking out onto the scene with genuinely mould-shattering mods, and the one we’ve got here is a properly polarising little roadster. Owned by Bangkok modding enthusiast Nattawut Aupaiboon and built by local tuning hotshots Meaw Garage, it’s jam-packed with unique twists – most notably what’s going on under the bonnet. See, this is where we get to the ‘untouchable’ bit. It’s generally accepted within the tweed-jacketed pipe-smokers of the owners’ clubs that Mazda got this car right first time, and anything you do to, say, the suspension will be deeply frowned upon. But when it comes to the drivetrain – well, that really is something else. Yes, the perky little twin-cam the car came with was an absolute peach, in either 1.6- or 1.8-litre guise, and most people tend to leave it be. It can be livened up with hotter cams, and it’s quite receptive to turbocharging, given that the basic engine was shared with the 323 Turbo so it was engineered for boost in the first place. But to rip the whole engine out and replace it with something different? That’s very naughty indeed.

That’s exactly what’s happened here though, as the eagle-eyed will no doubt have spotted. And it’s not even another Mazda engine, for goodness’ sake. What we’re looking at specifically is an SR20DET, the 2.0-litre turbocharged twin-cam that you’d usually find nestled cosily within the bay of a Nissan 200SX. These are infinitely tuneable motors, happily responding to stellar boost levels and a robustly uncompromising approach to internal fettling with a cheerful ‘Thank you sir, perhaps I can interest you in some more horsepower…?’ These hallowed motors appear in drift cars, dragsters, heroes of track, street and strip; much like all the old, written-off Supras got cannibalised for their JZ motors, so the 200SXs are being systematically plundered for their SR20s. It really is that good an engine. But in an MX-5? This is going to ruffle a few feathers… 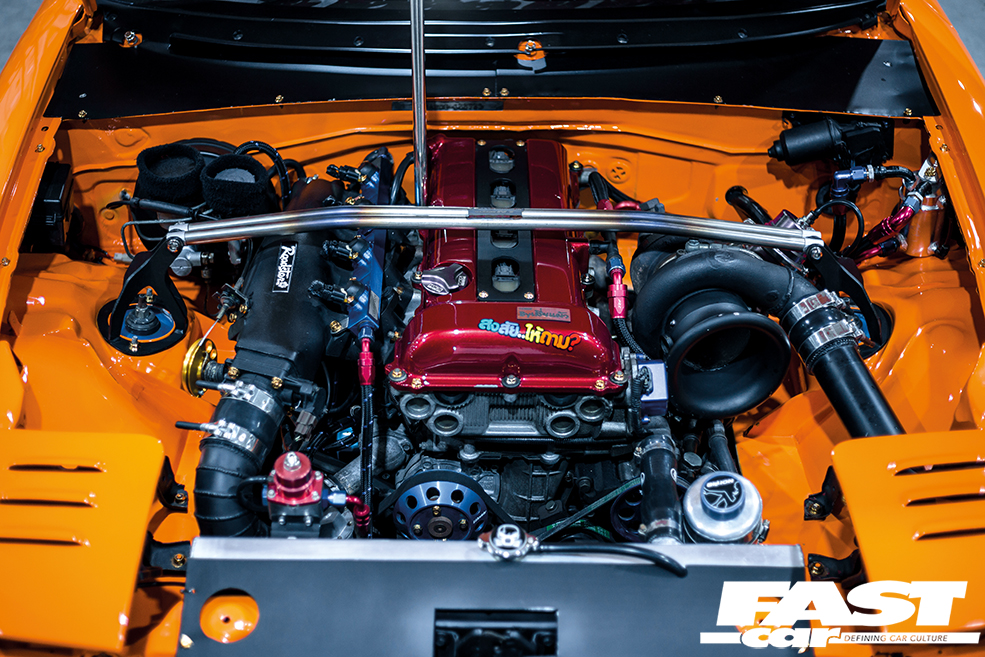 We’re totally OK with strutting about with our feathers all ruffly though, particularly when there’s substantial horsepower on the table. Meaw Garage haven’t just shoehorned a standard-spec SR20 in here; no, taking an in-for-a-penny approach, they’ve buggered about with it a bit. It’s now packing a GReddy TD06 turbo with an HKS wastegate, HKS cams, GReddy inlet manifold, custom exhaust system, a massively uprated fuelling system, and an HKS F-Con ECU to keep everything in order. The guys have mapped this to a safe and reliable 420bhp, which is pretty frickin’ nuts in a car that weighs about as much as an iPhone and a latte, and this hasn’t just been an exercise in raw horsepower. The chassis is muscled up to cope, with custom Cusco coilovers joined by FD3S Mazda RX-7 brakes at the front and Nissan Skyline units out back, and the interior is a work of road-racer art: there’s carbon everywhere, from the minimalist buckets to the instrument binnacle and centre console (as if the NA needs to get any lighter!) along with a bespoke rollcage. And outside? That’s the real masterstroke. There’s a beautiful nerdiness to building an MX-5/Eunos/Miata, with a culture of one-upmanship when it comes to finding obscure JDM aftermarket parts. In this case, we’re looking at a rare Garage Vary rear panel, complemented by the company’s lower lip at the front, while the near-mythical ZOOM Engineering provided the mirrors. In addition to this, Meaw Garage got elbows-deep in the custom work, creating those outstanding vented front wings, sideskirts and ducktail, as well as grafting in the rear diffuser from an FD3S RX-7. The headlight setup adds a touch of aggression, with a sleepy-eye kit holding the pop-ups at permanent half-mast, slimline LED lights peeping through the slits. And the whole thing has been lovingly slathered in a custom mix of citrus-infused paint, courtesy of the artisans at Royal Garage. The colour really pops against those superb WORK Meister S1s, their staggered dimensions pushing the very concept of static fitment to the extreme. 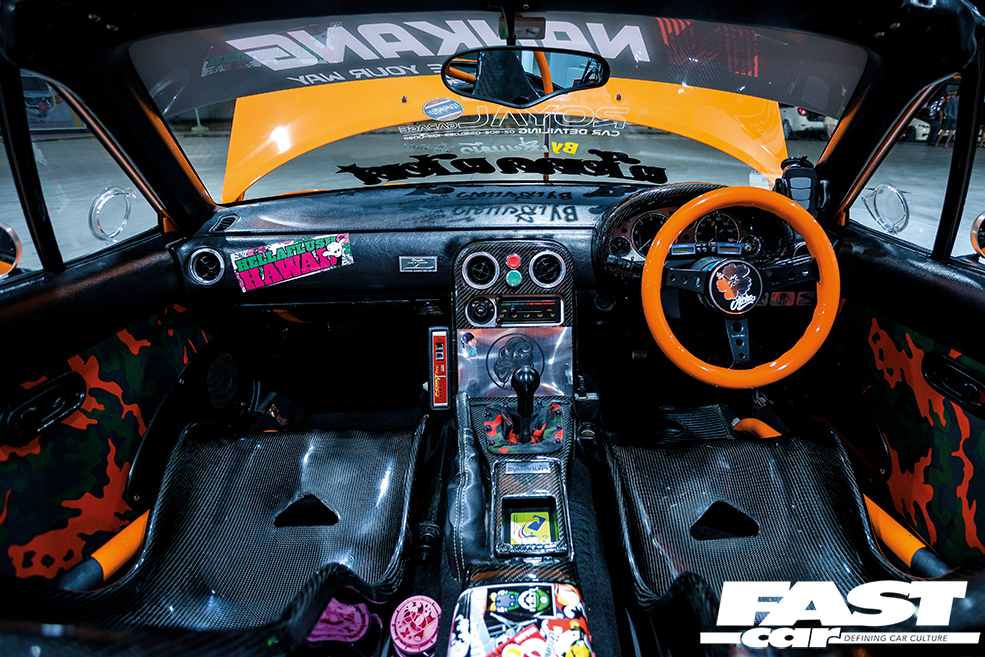 Some may say this Mazda is sacrilegious – we say it’s pushing the game forward. The Thai modding scene is on fire right now, and if these guys want to keep doing outrageous things with so-called untouchable cars, then bring it on. We wanna see P1 Imprezas with Lexus V8s, Iron Mask Skylines with Ford EcoBoosts, keep ’em coming. Nothing is untouchable. 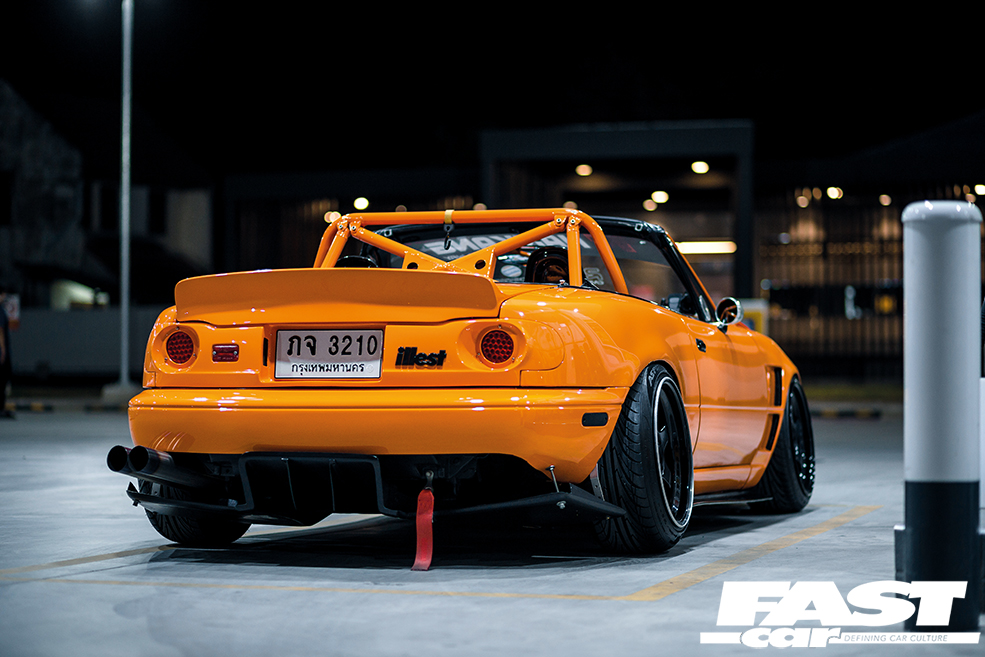