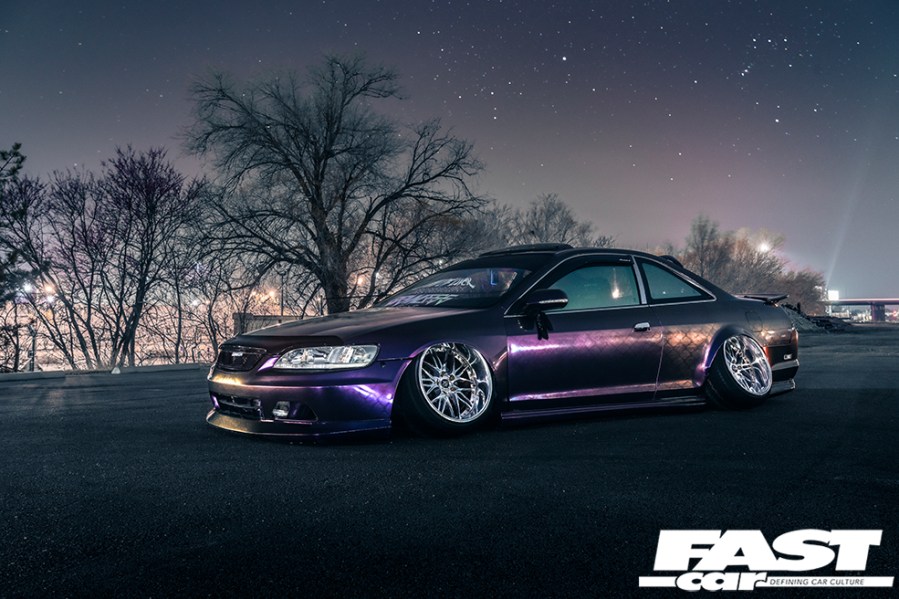 Hard to believe that this slammed Honda Accord was built kerbside without the use of a garage and was largely put together by the owner’s fair hands. It’s also his first serious build. Inspirational stuff indeed…

“You are now about to witness the strength of street knowledge,” spits Dr Dre on NWA’s legendary rap tune ‘Straight Outta Compton’. Yes, we jolly well are. We witness plenty of home builds here at FC Towers but they are usually carried out in the relative sanctuary of a garage or lock-up. Serious props are thus due to the owner and builder of the stunning 2001 slammed Honda Accord Coupe you see before you, Parker Wayne Thomas Burke, who completed much of the project at the side of the road.

Service writer, Parker, hails from Wichita, Kansas, in the good ol’ US of A. The start of his automotive journey was distinctively less gangster than his current ride in the shape of a 1997 Mercury Mountaineer that his grandparents handed him down. This was promptly sold to make way for a ’95 Honda Civic Coupe. A ’97 then ’93 Integra followed with only a 1970 Chevrolet C10 punctuating the Honda flavoured flow in between. An aspiration of owning a classic El Camino in the future is further evidence that Parker’s automotive loyalties are torn between the land of the rising sun and his home country of ‘merica. 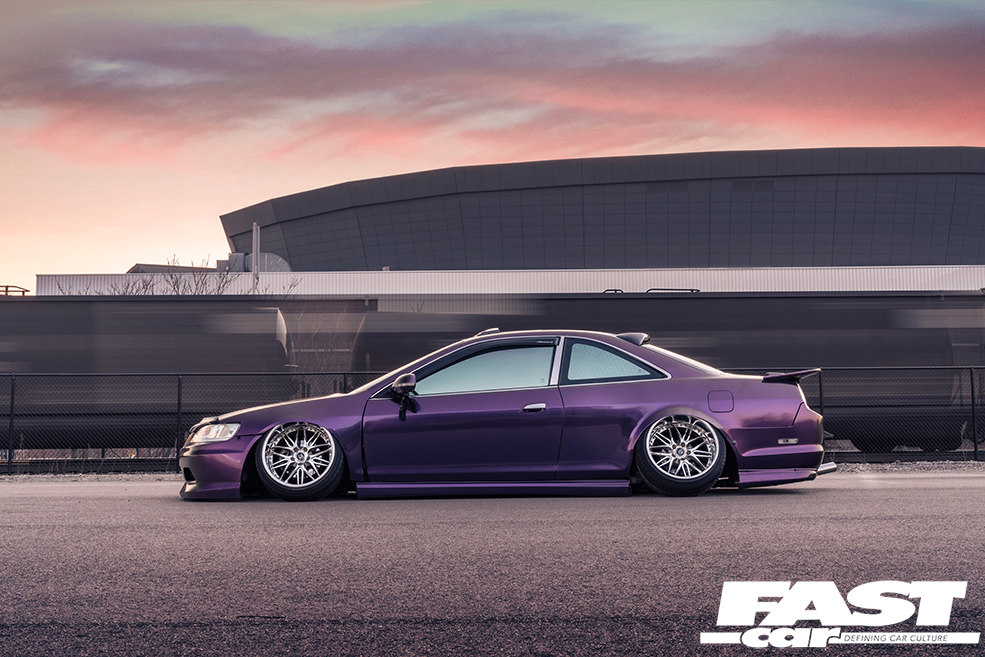 Parker admits that his previous cars were not in the show-ready condition of his Accord Coupe: “I told myself I wanted something nice for a young guy and wanted it to last, unlike some of my previous buys,” he says. A reasonably high mileage meant that the cherished coupe was able to be purchased for $2200, which was a fair price six-years ago when he first took ownership.

Parker explains how his initial plans for the car were far simpler than the finished article: “I just wanted a nice lowered car with no tyre gap at first, so I’d say things got a little out of hand,” he laughs. The first mod was a set of trusty Godspeed coilovers, which allowed the early design brief to be fulfilled. These were joined by Swift springs shortly afterwards with hardy ratings of 32kg front and 36kg rear to allow serious lows without the terrifying bounce. Parker drew inspiration from the Florida scene after watching numerous clips on YouTube and the whole camber obsession took hold. Whilst you would be forgiven for assuming this car is on air, you would in fact be dead wrong, as instead of practical bags, there is only next-level commitment that has been applied to the bespoke static setup achieved here. 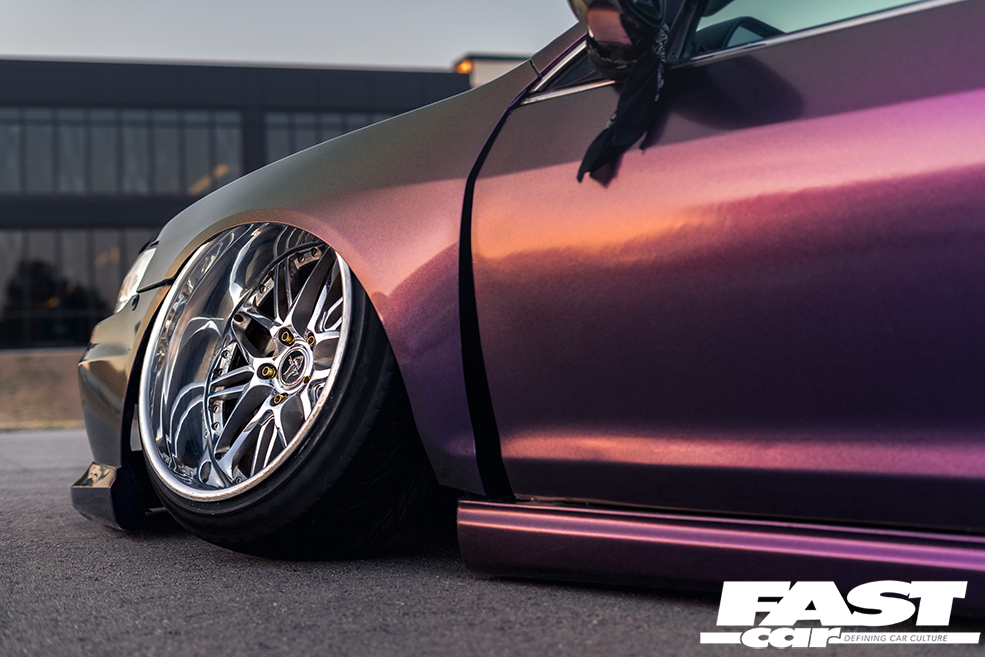 The drool-inducing rolling stock became the centre point and the coupe was built around them. The rare Weds Kranze Brophes were lovingly stripped, chromed and rebuilt. They measure a girthy 10.5x18in all round with a staggered offset dictating the dish width of 5.5in at the front and 6in at the rear.

The aforementioned Godspeed coilovers remained but the new direction of the car necessitated modified stanchions, custom drilled Civic top hats, and adjustable lower and upper control arms at the front. The rear of the car has a bespoke subframe. Fuel line bracketry has been removed as these now run inside the car to a boot-mounted custom fuel cell to protect them from being damaged by their proximity to terra firma. Upper camber arms, work with lower camber and toe arms out back to achieve Parker’s perfect stance, which, has to be said, is a look that doesn’t appeal to everyone. 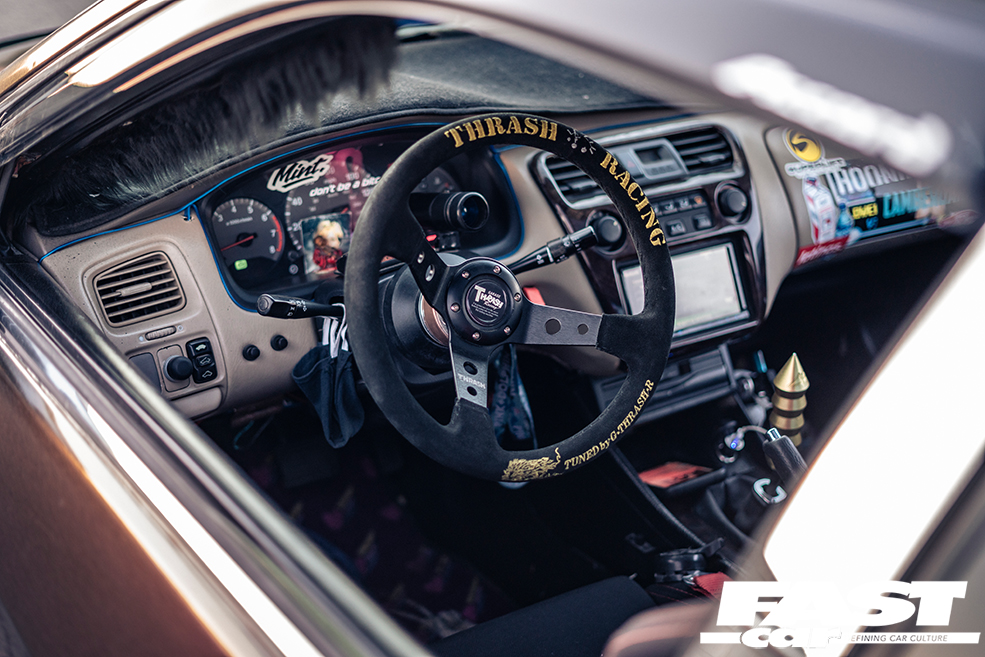 “Yeah, running static extreme camber is certainly not for everyone,” he laughs. “But I just love the look. It does come with a price though with tyre wear, ride quality and even where you can physically drive the thing, but to me it’s all worth it. I’ll make the sacrifices to live the low life and I don’t care what anyone else says.”

Drilled and grooved V6 spec brakes mounted to 5×114.3 hubs with ARP wheel studs keep the killer hoops in place, even with such radical camber trying its best to rip them from the hubs, while Hollywood levels of surgery were now required to get the bodywork sitting flush. The front bumper was extended to accommodate the width of the wheels and, whilst under the knife, Parker also had the fog light apertures removed for a smoother look and a Bayson-style front lip attached to get it even lower than it already is. The OEM front arches just couldn’t contain the audacious rolling stock and killer camber so Parker enlisted a pair of aftermarket front fenders to hug the rims nicely along with custom extended arches at the rear. 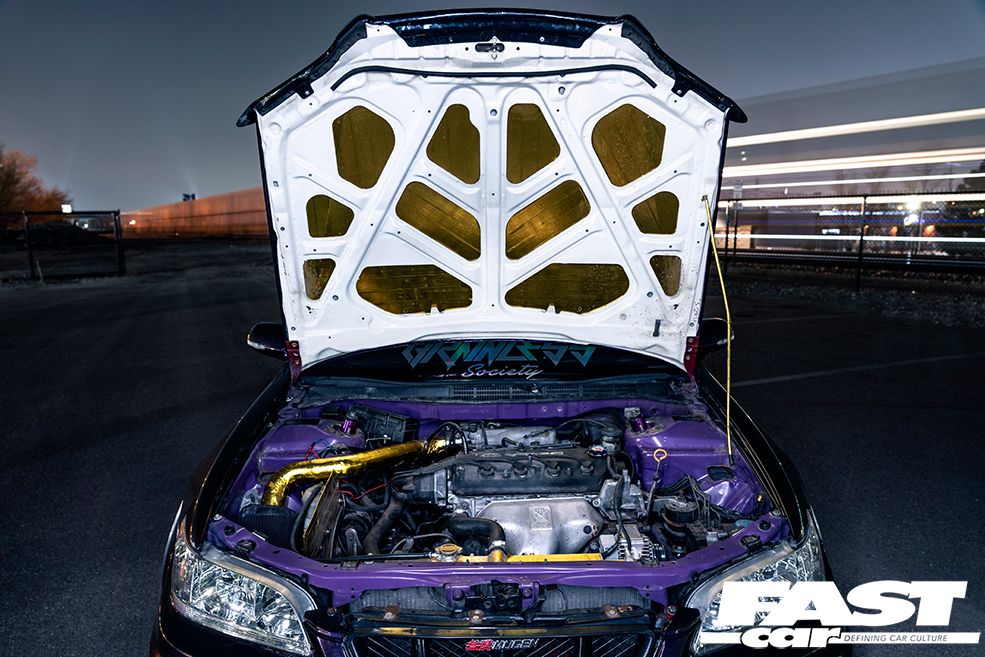 But Parker has made sure that this isn’t a car solely about its stance, as his unique vision has provided a look that features more visors than a Las Vegas poker tournament, yet the theme works and ties the car together. A 1999 Accord front bonnet with an AVS visor matches the AVS side window visors and rare OEM sunroof visor. A black rear window visor marks the last time visor is written in this paragraph. Clear housing headlights look fresh and the theme continues with clear sidelights and early 2000s rear clusters. LEDs have been used throughout. The subtlety of OEM replica side skirts and rear lip contrast against the extreme Black Widow rear wing while a wiper delete, Acura TSX mirrors and a custom front grill with Mugen badge complete the successful styling package. The chrome window tints pop proudly against a mauve flip JG Vinyl wrap too.

The motor of Parker’s mad creation has also been suitably pimped with a JDM-spec 2.3-litre F23 motor supplied by JDM of Chicago mated to an aftermarket radiator. A 1.5in motor raise kit and protection plate do their very best to save the sump, while a five-speed manual gearbox swap keeps driving engaging. An exhaust system consisting of stock headers, straight pipe to single resonator and a 1320 tip bring considerable bark to match the bite. Gold heat wrap on the induction kit piping and between the bonnet skeleton are evidence of the Midas touch whilst keeping things cool in the purple painted ‘bay. 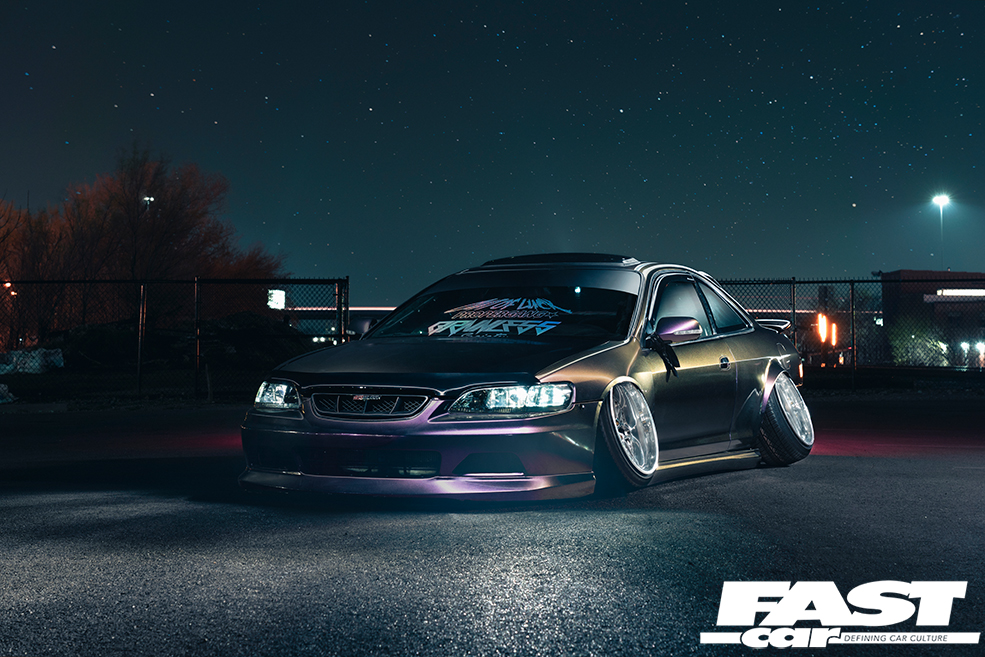 With such a radical package underpinning and surrounding this coupe, a standard interior was not going to pass muster. Much of the interior trim has been dyed black but blue suede accents break this up. Parker is a fan of NRG components and has chosen their quality seats, harness bar, seatbelts and quick-release short steering wheel hub while an oh-so-JDM Thrash Racing steering wheel and Likewise shift knob take care of controls.A back seat delete also allows a pair of 12in Rockford Fosgate P2 subs to take centre stage. These are supported by a well-selected range of Pioneer products including a 1200 watt amp, component speakers, and touch screen head unit. A push-button start – because racecar –  turns the experience on and Garage Moon Power floor mats and a liberal use of sticker bombing add a splash of colour and maximum scene brownie points to the nerve centre of the beast.

Throughout the build, trial and error was the order of the day and Parker freely admits that there were aspects of the project that he re-did two or three times in addition to the endless tinkering that was required to perfect the feature-worthy stance. So is the car finished? “Kind of. It’s been such a labour of love that I’m now super excited to enjoy it and get to some shows. I’ve actually just bought a trailer to allow me to haul it to some farther afield destinations. However, I feel that I might revisit certain aspects of the car at some stage. There are a couple of imperfections on the bodywork that, whilst not obvious, bother me as I know they’re there.” 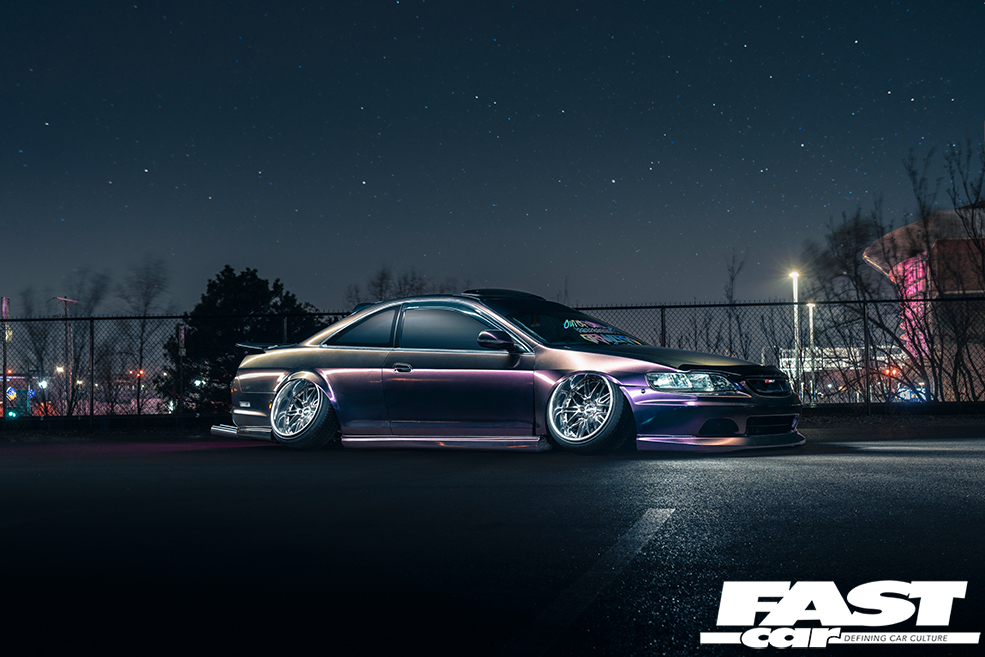 As is so often the case, Parker is his own worst critic. Given that much of this awesome build was carried out by the kerbside, this dude deserves a medal. So going back to where we started, has Parker, like Dre, “Still got love for the streets”? Well, in a word, no. “I’ve recently just got a garage space which has made my life a whole lot easier,” he beams proudly. Still, we’re all looking forward to the next episode. 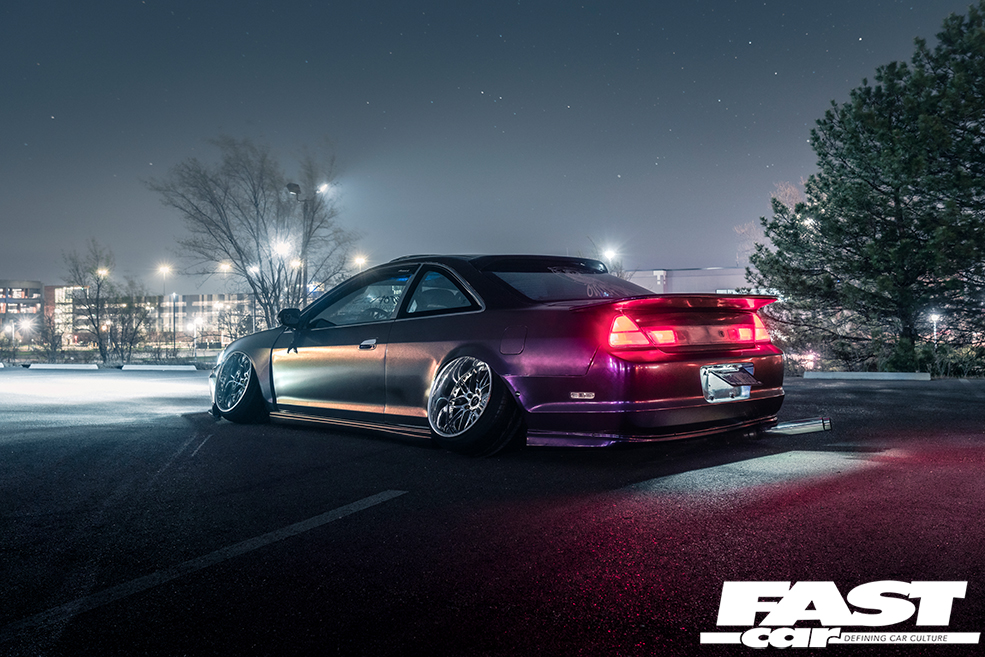 Whilst many dismissed the whole stance scene as a fad a good decade back, it’s now fair to say that it’s here to stay as part of the fabric of car culture. Its origins are rooted in a complicated melting pot of motorsport, lowriders and more accessible technologies in the form of cheaper coilovers and air ride kits.

As with any established scene, niche offshoots develop as time goes on and this is evident in the extreme camber movement which sits distinctively at its own angle (pun absolutely intended) alongside the stance scene at large. Camber has been creeping into the modified car world for some time now. As is often the case, the influences for this were often born out of functionality (appropriate tyre contact for drift applications, larger footprint for traction in touring car racing) but then stylised and exaggerated to almost cartoonesque proportions at the extremities of this obtuse (also intended, you’re welcome) and often radical subgenre.