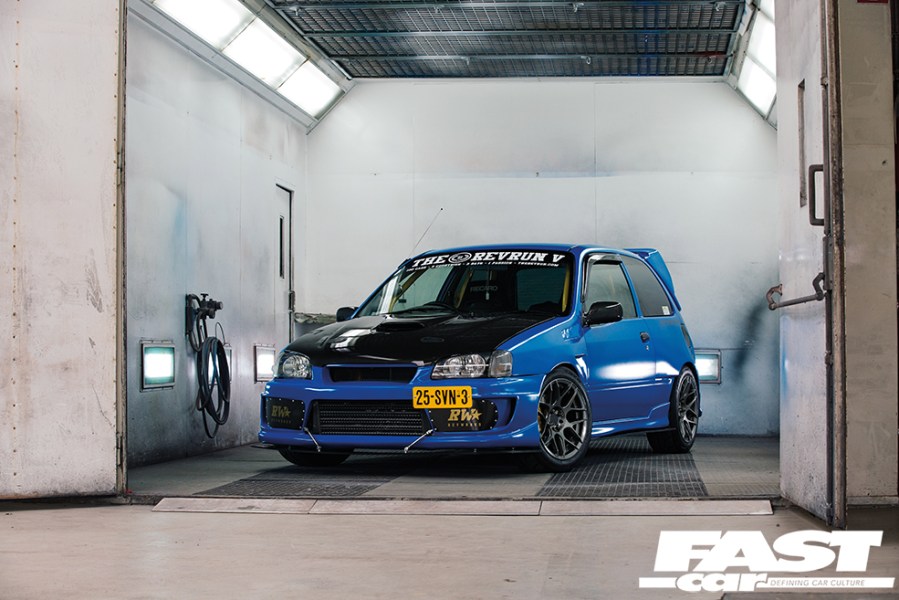 The Starlet Glanza V is a bit of a cult hero, throwing 138bhp of turbo thrills through a perky little chassis. But this particular Glanza is rather meatier than that. About 415bhp of meatiness, in fact…

The cult of the hot hatch is something that’s held performance enthusiasts in its thrall for decades. There’s been much debate over the years as to what was the first true hot hatch; for certain diehard fans, it all began with the VW Golf GTI, or the Peugeot 205 GTI. But what about the Simca 1100TI, the Vauxhall Chevette HS, the Autobianchi A112 Abarth? There are many cars that lay claim to the title, but it doesn’t really matter who did it first – what’s more important is who did it best. And we may be biast, but quite obviously Japan always does it best, eh?

Anyway, fast-forwarding to the late-1990s, we find something particularly intriguing straining at the leash at Toyota’s factory gates: the Starlet Glanza V. The 5th-generation (P90) Starlet was a decent enough thing in its own right; launched in 1996, it shared its platform with the Paseo coupé, and it was an honest and chuckable little poppet. In the UK we got a modest spread of spec levels – the base 1.3 Sportif, the slightly more upmarket CD, the sporty-ish SR, and the GLS which had all the option boxes ticked. But naturally the special stuff was reserved for the Japanese market: they had the Glanza.

This is a rather appropriate name for the model – Starlet itself, of course, denotes a small star that shines brightly, and Glanza is derived from the German word ‘glanz’ which means ‘brilliance’ or ‘sparkle’. The name alone leads to an effort to apply even more lustre to an already sparkling base, and the spec backs this up with a brilliant-cut glimmer. The Glanza S is an interesting curio, with its naturally-aspirated 1.3-litre 4E-FE engine producing 84bhp, but the real jewel is the Glanza V – this threw a turbo into the mix, the 4E-FTE creating a robust 138bhp. In a car that weighs about the same as a packet of tabs.

Naturally, no matter how promising a base, there’s always room for improvement, and what you’re seeing here is effectively a sort of Glanza V Plus. Crafted by Erwin van der Vijver, resident of Valkenburg in The Netherlands, it pulls together everything that was right about the late-1990s Toyota line-up, amps up the details and transforms the Glanza V from mildly surprising hot hatch to hell-raising road-and-race hyperhatch. Using the larger engine from the Paseo, then throwing a huge turbo into the mix for good measure, Erwin’s spirited something really quite special into being. “I’ve been into modified cars since I was a kid,” he says. “My father has four modded Porsches, which explains a lot, and when I was old enough to get my first car it all started with a Starlet – a 1997 model which immediately received springs and a set of wheels. After that came a Glanza V, which taught me a lot about car mechanics, although it ended up going into a wall at over 100mph… I’ve also recently bought a late-1980s EP71 Starlet which is getting a lot of mods.” He’s a dyed-in-the-wool Starlet enthusiast then, that much is clear. So how did this Glanza V enter the picture? “Well, I had to get another one,” he grins. “It’s just a little Japanese bomb with simple electronics, it’s basically indestructible. They aren’t cheap these days though… but I bought this one four years ago. And I was busy with modifying it from day one!”

Unquestionably the longest and most involved task of Erwin’s project was the engine swap and build-up, which involved a lot of trial and error. The 1.5-litre block from a Paseo was dropped in to swell the little Starlet’s lungs, having first visited Babo Motoren Revisie in The Hague to be checked over, optimised and bored out to accept 75mm Wossner pistons. Erwin’s attempts to swap over various parts from the old engine resulted in dead-end after dead-end, at which point he threw his hands in the air and decided to just upgrade everything, which is an approach we very much approve of. The 5E-FHTE block now features Scat conrods and ACL bearings, while further up you’ll find a ported and polished 4A-GE head with custom large exhaust ports, Speedvision cams, and Racetech valve springs. Most excitingly, however, the dinky stock turbo has been ousted in favour of a full-fat Precision 5554, which sits on a custom manifold that flows through to a full 3-inch exhaust system, heralding chaos and terror wherever he blips his eager ankle. Combined with the 1,050cc Injector Dynamics injectors and high-pressure fuel rail, along with the 70mm Honda throttle body, it all adds up to a package which Toyota’s engineers must be kicking themselves that they didn’t come up with in the first place. Instead of being a cult icon, the Glanza V would have gone down as an all-time classic.

There’s no time for what-ifs here though, because Erwin’s startling creation has been specifically crafted to be one-of-one, something the world has never seen before. With this in mind, he’s paid particular attention to the aesthetics, honing and refining to craft a unique profile: “The carbon bonnet was completely broken down to the resin layer and then restored,” he explains. “With the Varis front bumper, the fog lamp holes were drilled out and carbon plates popped over the holes with rivets, and the Livesport wings were restored too. The carbon splitter I made in conjunction with Double M Carbon, and the rear wing was carefully widened with parts from a scrap Starlet. The JAM spoiler? That was in two pieces so it was also repaired and restored, and there’s a carbon ducktail which has been finished in the body colour.” This evidently isn’t simply a quest for uniqueness, but one of ingenuity, of finding rare and unusual aftermarket parts that are long- deleted from the catalogues, and making them better than ever. This isn’t just a car that hasn’t been built before, but one that almost certainly could never be built again.

The thing that any hot hatch lives or dies by is its poise and chassis finesse, its ability to deploy whatever power’s available in the most effective manner, and gratifyingly Erwin’s entrusted this to a name revered in Starlet circles – ZEP Racing are a JDM aftermarket powerhouse, and he’s tapped them up for basically the entire chassis catalogue: coilovers to offer near-infinite adjustability, Panhard rod to relocate that solid rear axle (which can go on the squiff when the car’s lowered), anti-roll bar, anti-lift kit, and the all-important big brake kit. As Erwin perches inside in his Mitsi Evo IV Recaro, the Cusco cage glimmering in his visual peripheries, he can have every confidence in the quality of what he’s created.

We’re not saying that the Starlet Glanza V is the best hot hatch of all time. That would be quite a claim. But with Erwin’s efforts here, taking an often-overlooked platform and accentuating every single detail to fabulous effect, it’s certainly got the stones to teach the big boys a thing or two. Shine on, you crazy diamond.