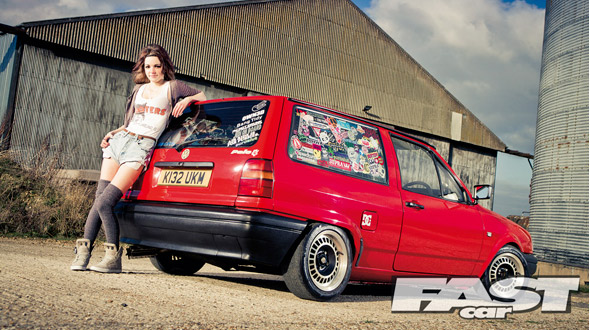 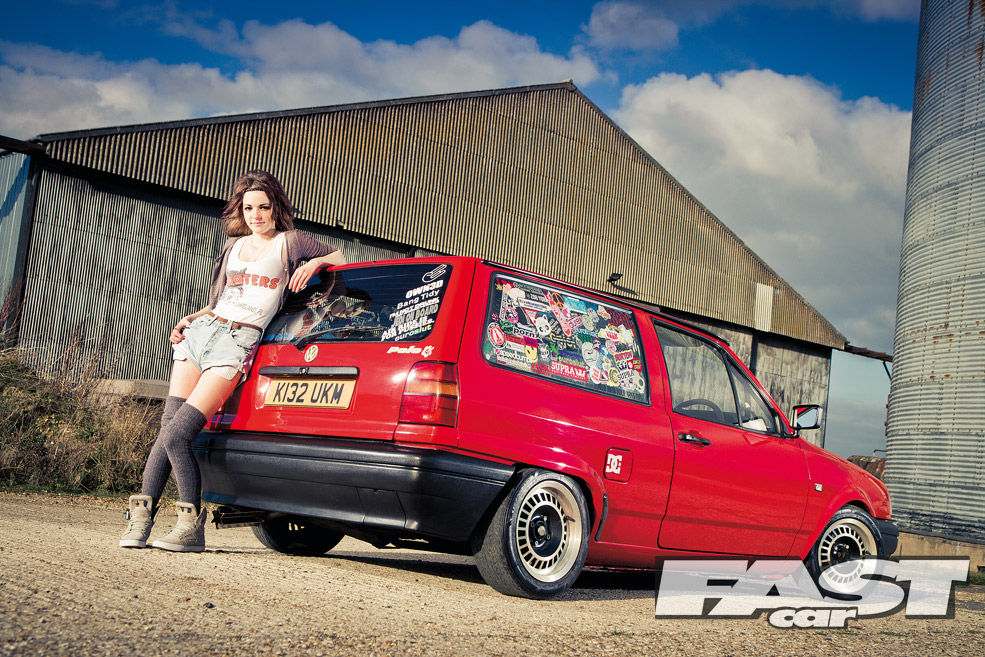 To have a girl turn up to a cruise behind the wheel of a modified car is one thing, but for that car to be a corking retro Dub built on broken fingernails and grease stained skirts is, my friends, quite another. 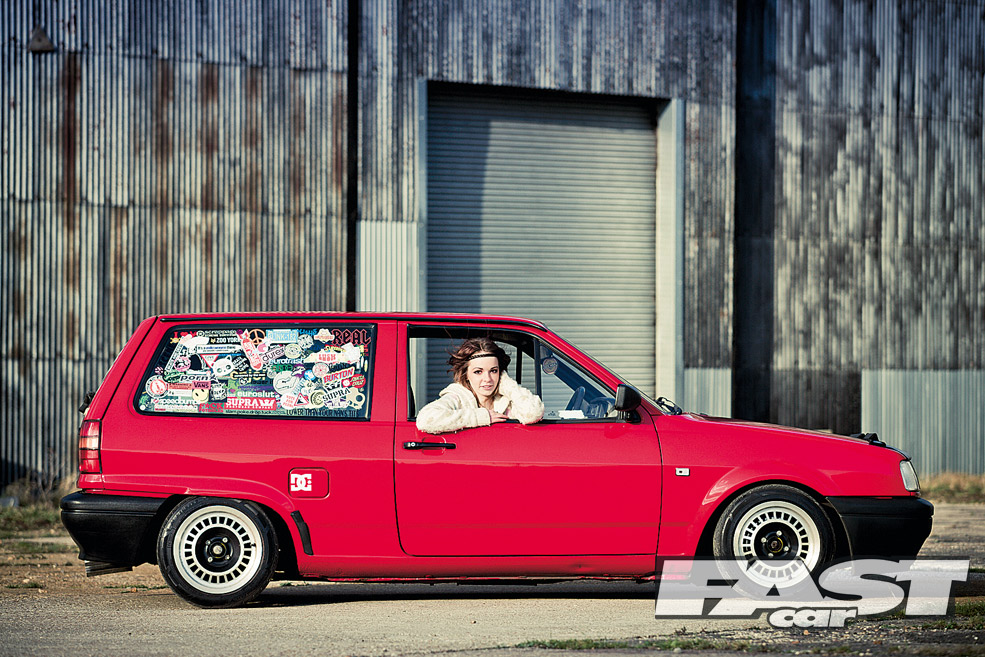 Meet Becca O’Reilly and her plucky Mk.3 Polo. We first spotted them chilling at the Essex hyper-meet in Harlow back in November, where a quick chat with FC confirmed she wasn’t just a lad’s tag along for the night, but a lass who is every bit into modified car culture herself. 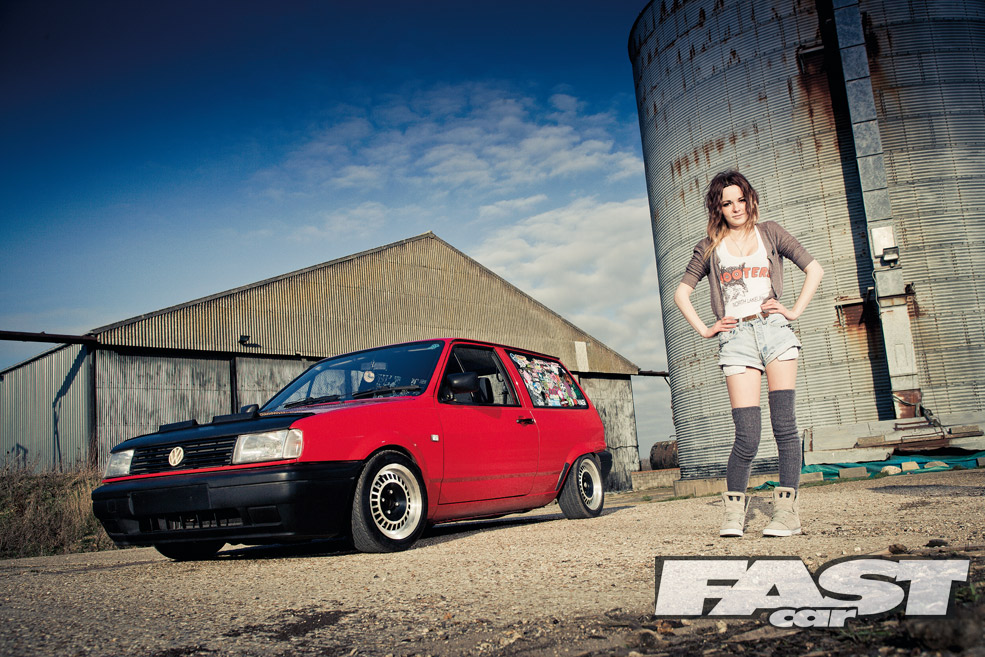 The Cambridgeshire car buffette definitely knows her onions when it comes to slammed rides too, and reckons modifying was more of a destiny than an accident. “I’ve always been interested in old cars, but the modifying part I guess is just me,” the aspiring snapper says, “and I don’t think I’d ever have something standard. I’m the same with clothes; I often buy things and then rip the pockets or put studs on stuff – I like making something reflect me.” 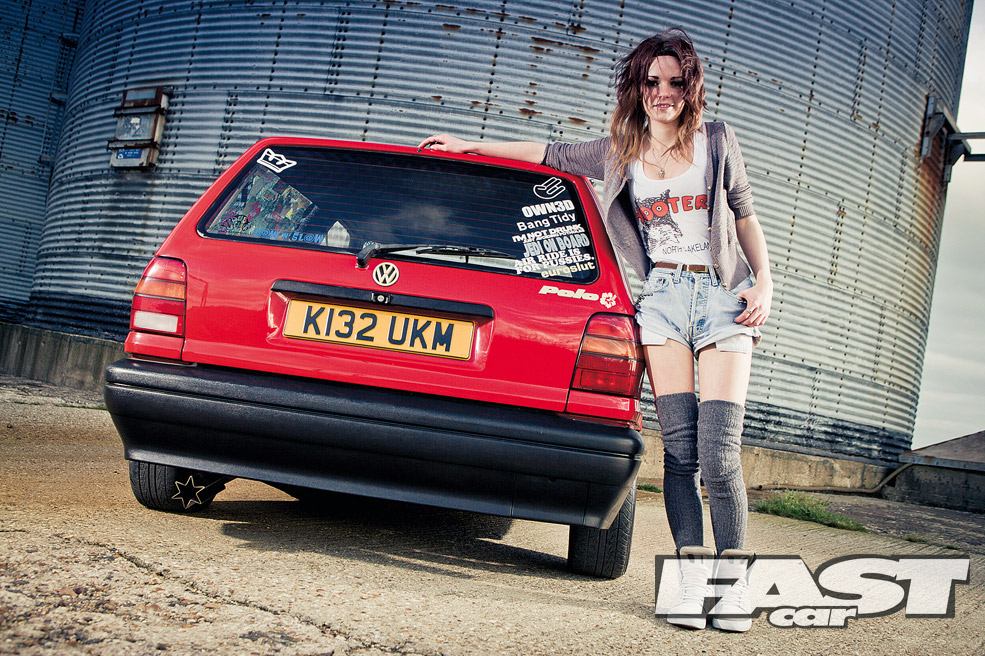 Becca’s Breadvan was a carefully chosen project base, bought stock and in prime nick, as she explains: “I actually wanted a Ford Capri but insurance was just too high. I then fell in love with Polo Breadvans and preferred the facelifted Mk.3 version – I was searching for three months before I found the right car, as it had to be mint.” 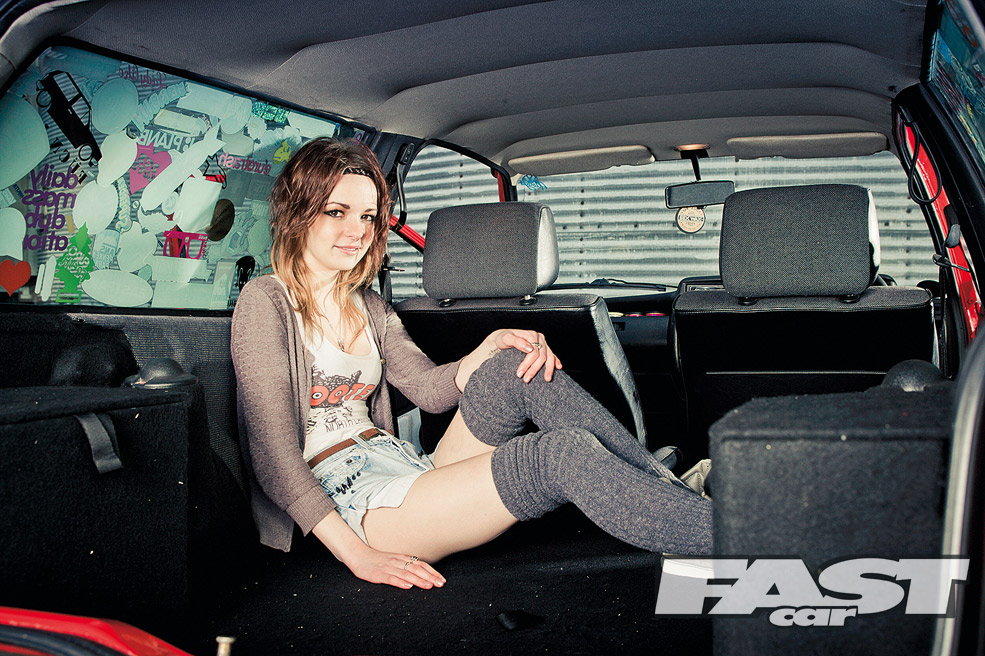 Once Becca was sure she had invested in the right metal, it was time to get down to what she loves most – modifying. The project didn’t hang around and she’s since treated the Polo to a healthy drop in height with flared arches, smoothed bump strips, plenty of stickers and cream detailing all thrown in to accompany those mystery wheels and full body respray in original Tornado red. 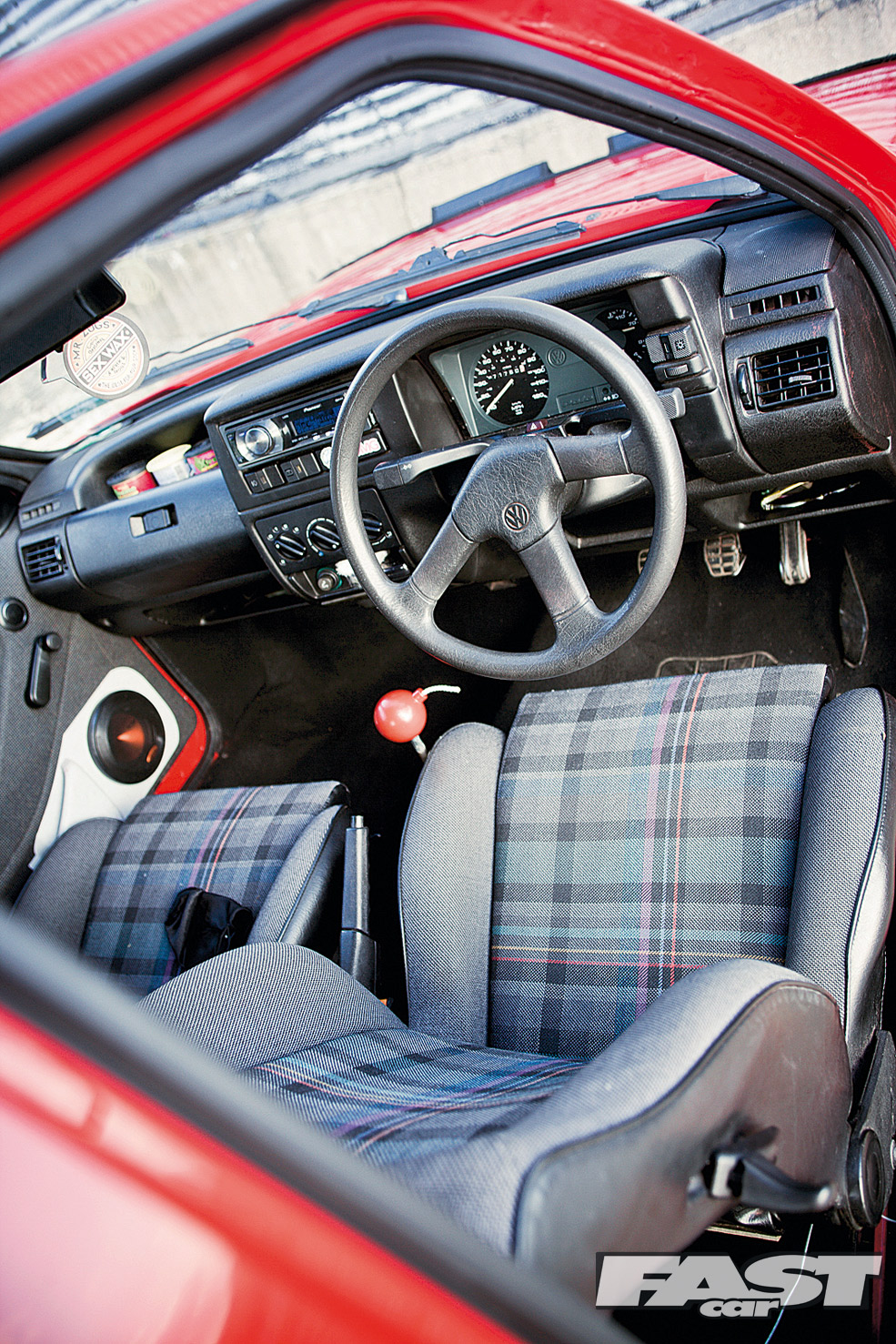 The work has continued inside, where standout upgrades include mint Scirocco GT2 seats, better spec door cards and a carpeted false floor to house Becca’s audio, and cleaning products for a quick buff prior to her many meets. 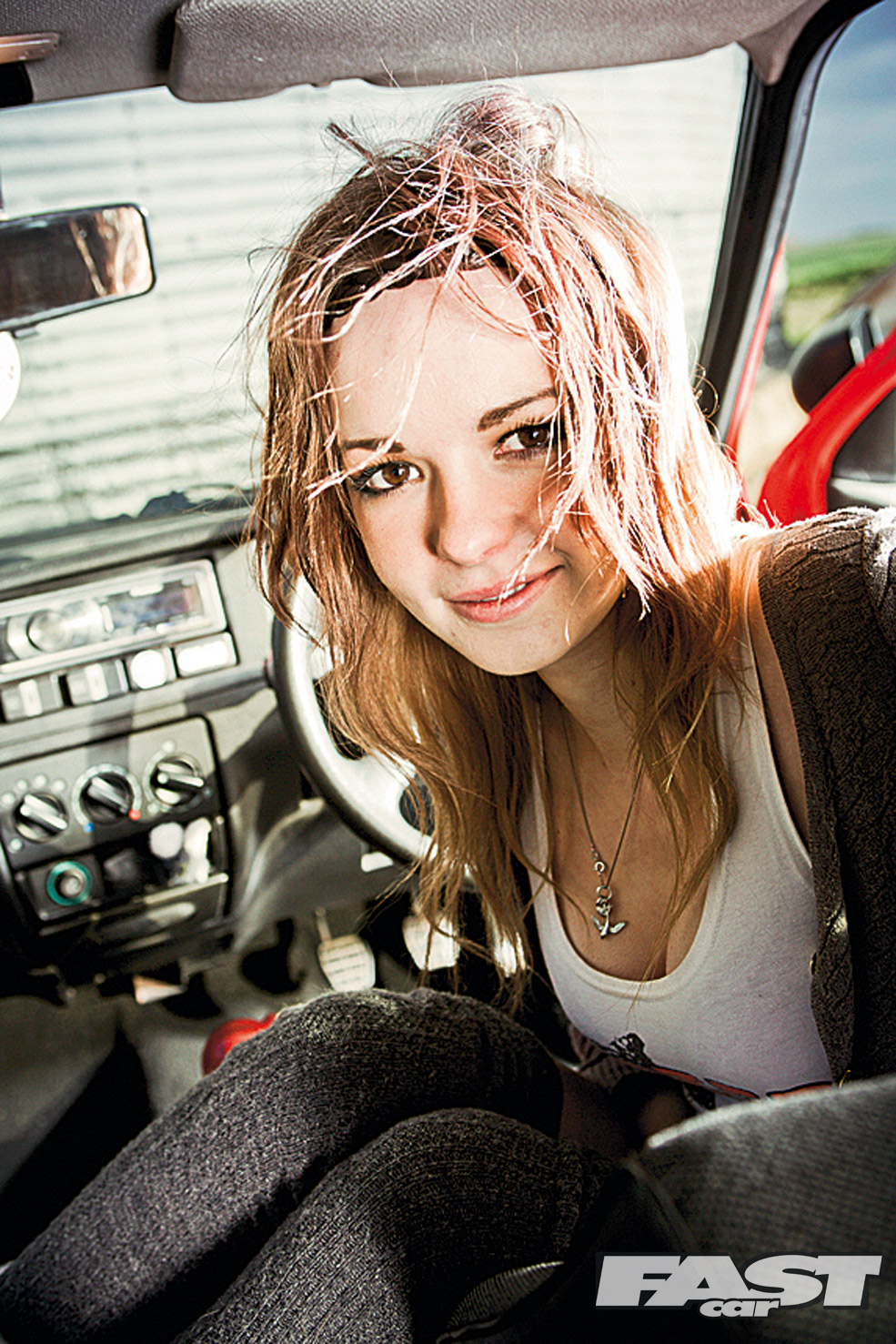 The result is a mint little Mk.3 Polo that draws applause from many a male fan, even if it puts them in the doghouse with their own missus. The 21-year-old clarifies: “Driving down the
street, lads seem to like it, but their girlfriends give me dirty looks! I’m always getting a thumbs up though, as it’s a fun car that looks good.”

As for future plans, our lass isn’t naïve enough to believe a modified car is ever finished, and instead has big ideas, including a Polo GT lump on Honda bike carbs for the bay. That might take some serious nuts, but don’t bet against it – after all, with her take on the scene, she’s already proven to have bigger ones than you!