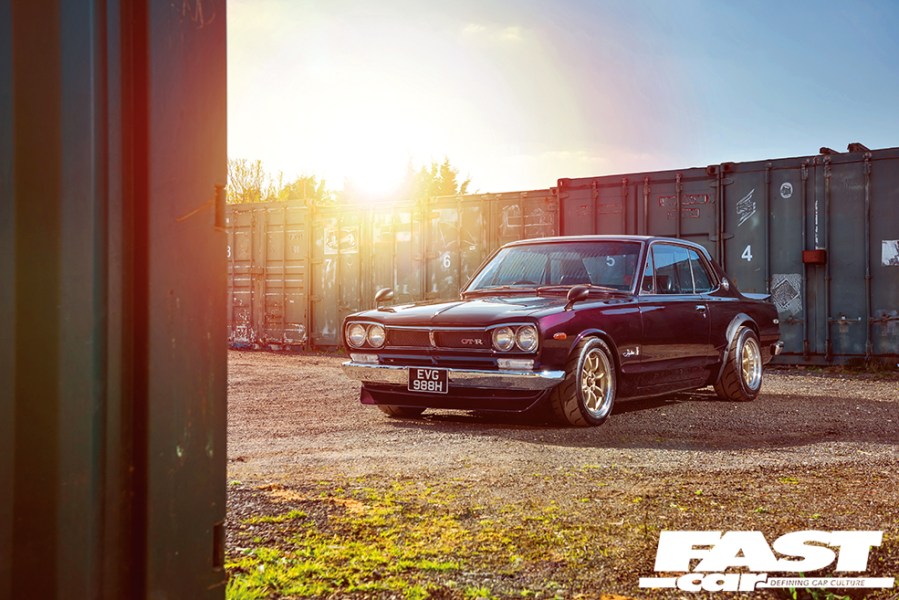 It takes some serious cojones to swap a modern motor into a bonefide Japanese classic, but when the result is this good, we reckon it’s worth the risk… We check out Steve’s RB26-powered Hakosuka.

Classic cars have seen a huge surge in popularity of late, with just about every desirable model from the late sixties to the early nineties attracting a massive increase in value. This has pushed many of the most coveted models out of reach of all but the most wealthy of collectors. However, if you can stretch your cash to get your hands on one, it could turn out to be the most shrewd financial investment you could make, with the rates of appreciation vastly outstripping anything you could hope for from your high street bank. But aside from the initial economic reasons why these aging machines are attracting such attention, there’s also the fact that owning and driving one gives us petrolheads the kind of visceral satisfaction that you simply can’t get from a modern car and, for many, this is reason enough to find the funds.

Serial feature car builder, technician, retro restorer and unique car trader Steve Grove is one such car nut who has took the plunge into classic car ownership, with this glorious plum-coloured creation splashed across these pages. 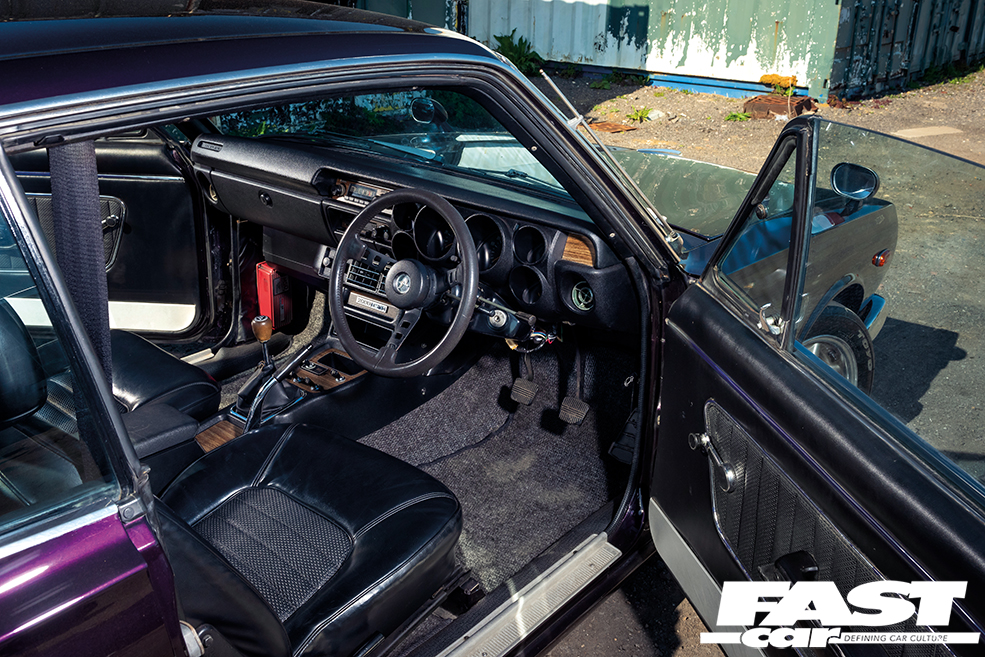 “For fans of Japanese metal, the original KPGC10 Nissan Skyline GT-R is one of the cars that attracts the greatest level of desirability and in-turn the highest prices,” explains 43-year old Steve as we check out the gleaming polished paintwork of his stunning example. “Launched in 1969, it was the first car to feature the now legendary three-letter moniker, which has been reserved for the exclusive use on Nissan’s flagship performance models ever since. Not only is the C10, known widely as the Hakosuka – roughly translated to ‘box skyline’ – one of the rarest Japanese classics, but the racing pedigree that comes with it – 50 race wins in its first two years – ensures that it remains a revered favourite for fans of performance cars the world over.”

And with prices for genuine GT-R models currently over £200k a piece, you’d guess that Steve must be some kind of lottery winner or stock market trader to have such a valuable classic at his disposal, however, all is not quite as it seems…

“Yes, it does feature the iconic GT-R badge, but in truth it’s actually a less eye-wateringly expensive KGC10 GT-2000 model that I have restored and converted to look like its race-bred sibling,” Steve confesses. “In reality, there isn’t actually that much difference between the two models, with only the engine – GT-Rs feature a twin-cam 2.0-litre S20 engine, whereas the GT-2000s get the single cam L20 – and some minor interior and exterior trim differences separating the two.” 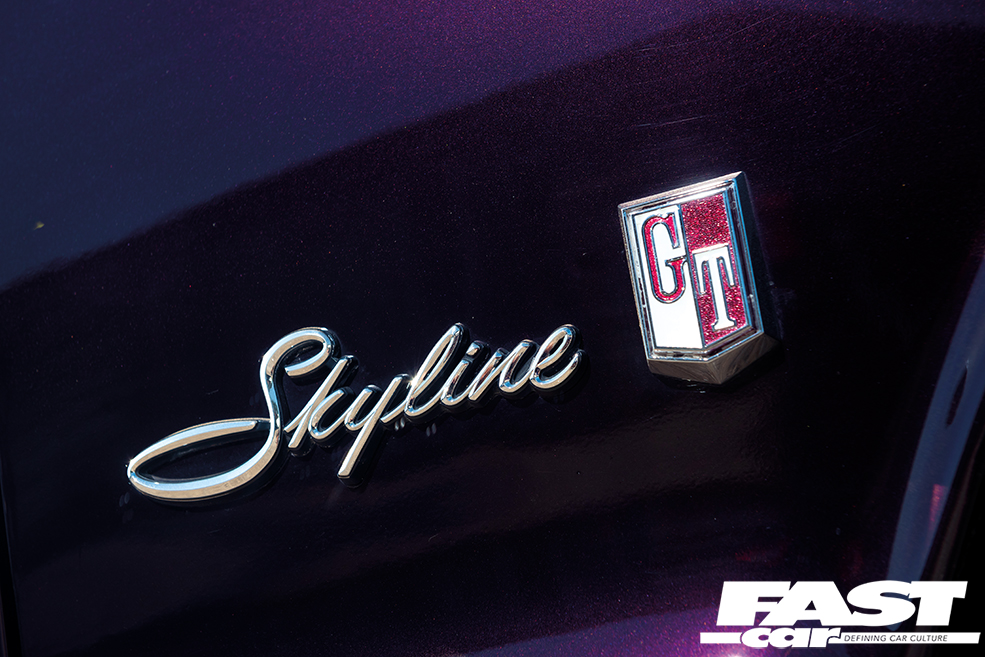 And with prices for the GT-2000 models under half of what a genuine GT-R commands, you can see that, while still far from cheap, they are a much more viable option for anyone seeking to gain entry into Hakosuka ownership, a fact that Steve knows only too well.

“I could never afford a genuine GT-R, so this is a great alternative. In fact, with a bit of engine tuning and some visual modifications, you can have a car that not only looks exactly like the real thing, but it will far out perform it too!”

And it was this tuning-trumps-authenticity way of thinking that led Steve to seeking out a suitable steed to carry out his modified master plan.

“I bought the car in a private sale from Japan,” he says. “The idea was to use it as a base to build a Hako project with a naughty engine, but I needed a mint shell for the job, which isn’t always easy to come by. So when I saw this one, it seemed to tick all the boxes.” 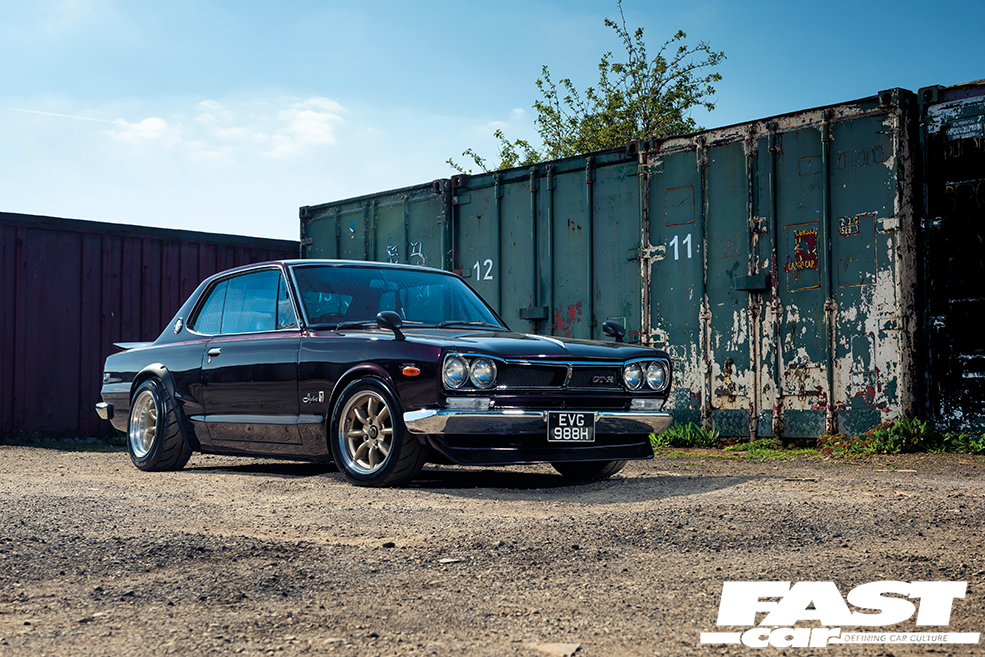 Previously owned by Japanese tuning legends HKS, the 1970-model had been painstakingly restored with a bare metal respray in R33 Midnight Purple. It featured all the original panels and had once featured a 3.1-litre race engine, however that had since been replaced with a standard L20 running triple Mukuni carbs before being sat in storage for more than a decade without turning a wheel.

“I was originally planning on painting it white when I first got it, as I wasn’t sold on the colour, which had dulled badly through all those years without use,” Steve remembers. “But as soon as I got it home and rejuvenated the paintwork, I was stunned at just how good it looked. After that there was no way I was going to paint this one at all!”

He did have to cut and weld the rear arches to fit the GT-R style overfenders, adjustable KYB coilover suspension and a set of  7.5x15in front and 11x15in rear Watanabe RS wheels with fat Toyo R888R tyres, however it was a small price to pay for the visual transformation it gave.

“It did seem slightly sacrilegious to cut up the perfectly good original arches, but adding the GT-R extensions, wider wheels and additional exterior trim around the grille and rear lights took the car to another level,” he beams. “They give the car so much more aggression.”

But even though he has essentially created a GT-R replica, Steve is under no illusions as to what the car really is. 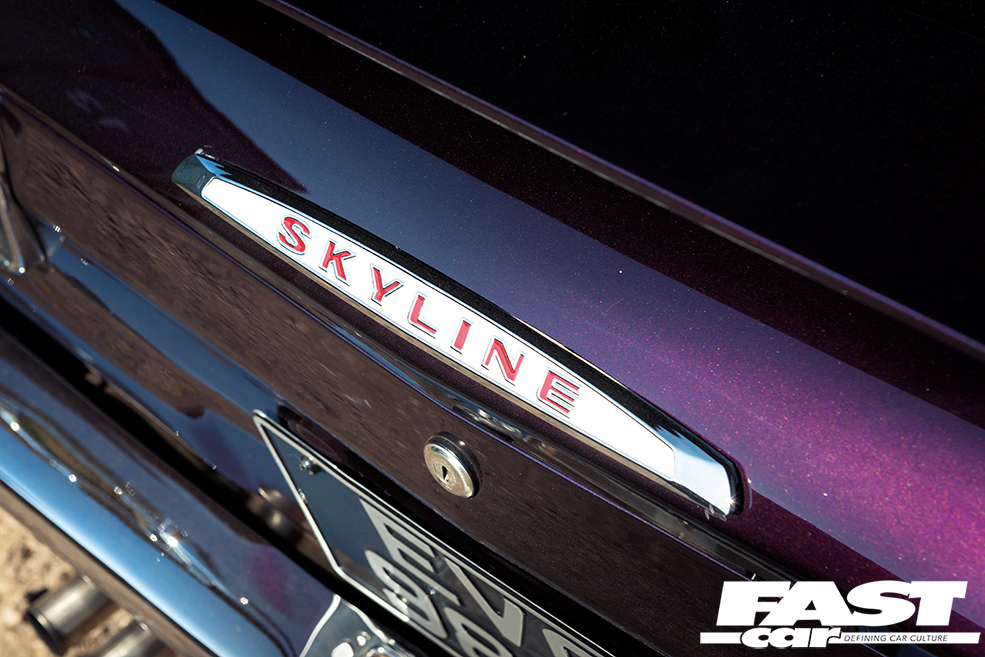 “The fact is, although it’s an amazing classic car in its own right, it’s not a real GT-R, and will never command those stratospheric prices, so that’s why I’m happy to add my own touches and not worry about retaining 100% originality,” he explains. “For example, I’ve equipped this car with an RB26 twin turbo engine.”

And while some may be concerned that such a departure from the OEM parts would somehow devalue the car, Steve is confident that his investment is safe.

“I can’t see that the engine swap de-values it at all, and even if it did, I’ve still got the original L20 engine and, the way in which I’ve done the conversion – without modifying or altering any part of the original chassis or body – means I can easily change it back again if a potential buyer wanted it that way, and no one would ever know the difference.”

But just one look at the conversion and you’d have to be the most strict of purists to want to go back to the original lump, as this is modifying of the highest order. The fit and finish of the immaculately rebuilt and polished RB26 in the Hako bay is better than factory and means that Steve can enjoy the fruits of his considerable labour and revel in more than double the power, plus the iconic noise and no-fuss reliability of the more modern motor. 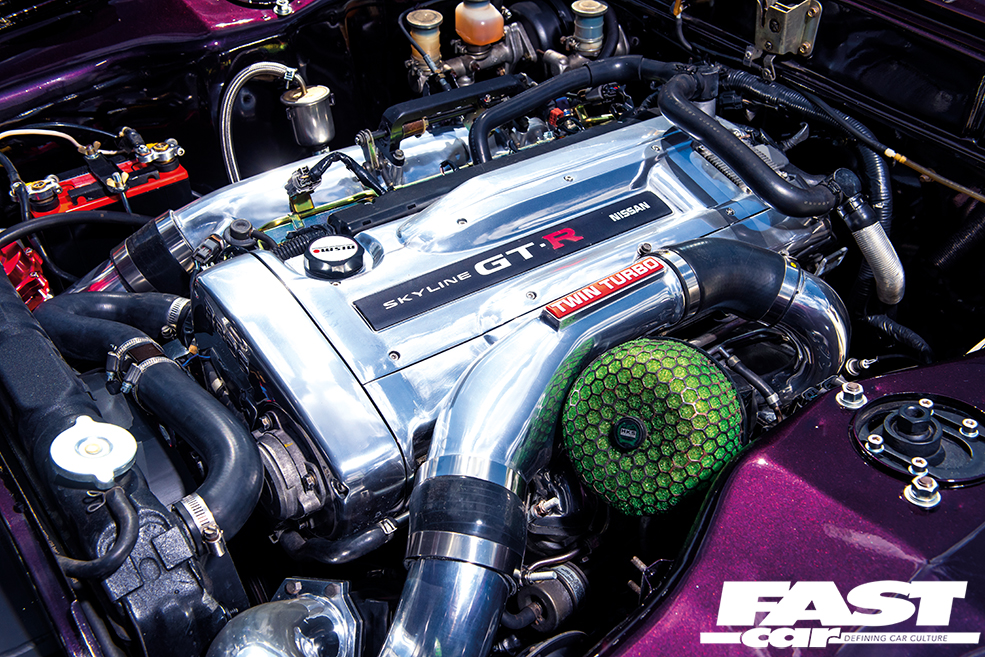 Steve sourced the RB engine from a R33 Skyline GT-R which was being broken for parts and set about stripping and rebuilding it so it was in perfect condition for its new Hako-based home.

“Whilst I was carrying out the refresh, I added some uprated parts too, such as an N1 oil pump, a modified RX-7 front-mount intercooler and a pair of N1 steel turbochargers,” he says. “I also fitted a modified RB25 sump, which was required to ensure clearance in the Hakosuka engine bay.”

As well as the tweaked sump, the six-cylinder lump has been equipped with modified RB20 engine mounts to allow it to drop straight in without making any modifications to the original bay.

“It was really important to me that the conversion was as factory as possible, and completely reversible,” Steve says. “That’s why I put a lot of effort into ensuring everything worked exactly as it should without any additional modern parts on show or alterations to the original car.” 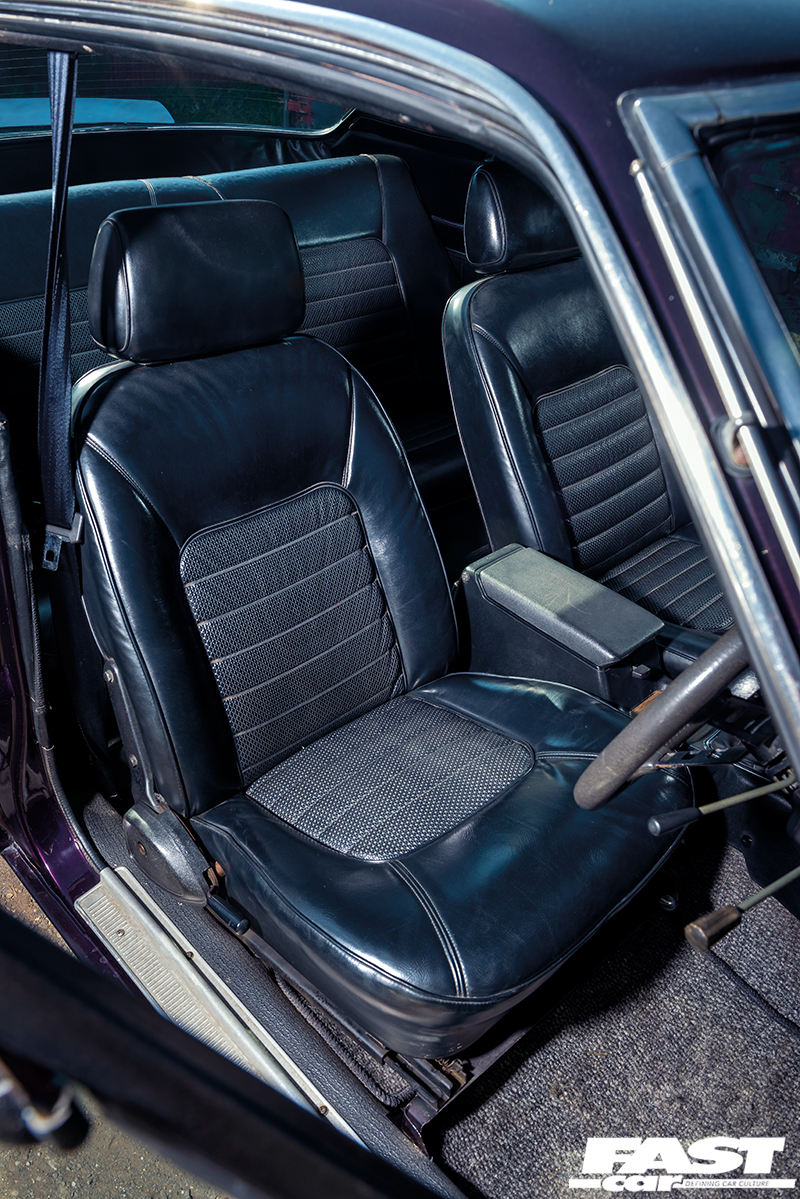 This included connecting all of the 1970s gauges and dials and getting them to work flawlessly with the RB engine as well as hiding the modern ECU and wiring in the car’s original air conditioning housing.

“To anyone looking at this car, other than the engine itself, you’d never know that it wasn’t 100% original,” Steve says proudly. “Of course, pop the bonnet or fire up the ignition and things become clear.”

If you are lucky enough to slip into the restored black vinyl seats and savour that unmistakeable classic car aroma you’ll find that, unlike the old carb-fed motor, the RB26-powered Hakosuka fires the instant you turn the key and the iconic six-cylinder soon settles to idle. Drive is sent to the rear wheels via a five-speed RB25 gearbox and Subaru R160 limited-slip differential and provides a prodigious level of performance that seems slightly at odds with the classic bodywork. 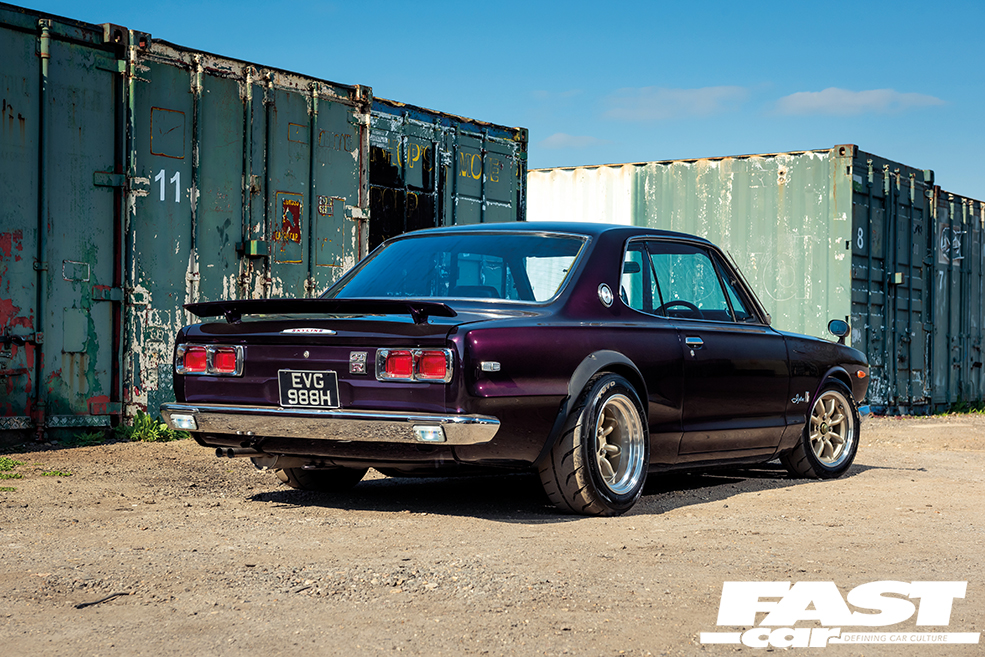 “It really does shift,” laughs Steve. “Luckily it came from Japan with a set of uprated MK63 four-pot calipers and big discs at the front, which were originally fitted to the racing Hakosukas. These really help haul you up from the kind of speeds that it’s now capable of with ease, which is probably a lot faster than the racing cars ever went.”

And it’s the blend of classic good looks combined with potent modern mechanicals that makes this RB26-powered Hakosuka such an impressive machine. Yes, it takes a certain amount of balls to transplant an RB26 heart into a coveted classic, but Steve has shown that with determination, an eye for detail – and not to mention some god-like spannering skills – the rewards can far outweigh the risks.