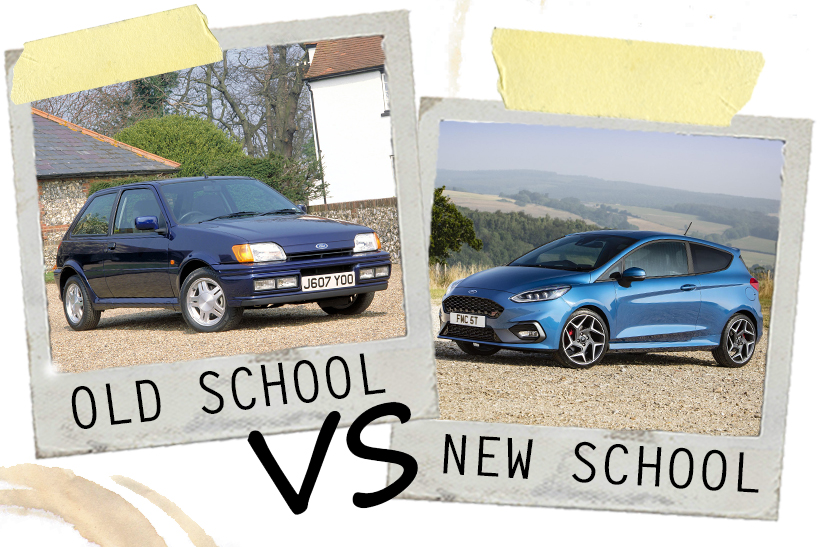 Welcome to Old School vs New School, the series where we pick out the cars from the good old days, and pair them with their spiritual successors. Last week it was the Vauxhall Nova vs the Corsa VXR, this week it’s the Mk3 Ford Fiesta RS1800 VS Mk8 Ford Fiesta ST…

THEN: FORD FIESTA RS1800 (MK3)
The word ‘turbo’ was a really big deal back then. Whereas nowadays pretty much everything’s turbocharged for the sake of efficiency, it used to be a real statement to have a turbo.

The Escort RS Turbo, Renault 5 GT Turbo, Fiat Uno Turbo, MG Metro Turbo, these were cars owned by people who loved to turn the boost up, melt the engine, rebuild it and start all over again. The values of these cars have gone insane these days, because they’re what everyone grew up wanting, and now there aren’t many left.

The Fiesta we’ve chosen here, however, isn’t the RS Turbo. It’s the RS1800, which is the car the Fiesta RST always should have been. It was never as popular because it didn’t have that iconic turbo badge, motor than the old boosted CVH) and, with its quad-spotlights and RS2000-alike wheels, it looked properly cool.

The RS Turbo kids may have had their shouty dump valves, but the RS1800 drivers always knew their hot hatch would get them home again.

Going way back to the original Mk1 SuperSport, the idea of shoving more power into a Fiesta has always been a strong one, with the XR2, XR2i, RS Turbo, RS1800, and various generations of ST each being massive sellers.

The Mk7 Fiesta ST won pretty much every award going for being a generally brilliant hot hatch, and now that the boxfresh Mk8 ST is with us, the merry-go-round starts anew.

It’s telling that tuning companies like SCC and Scorpion took delivery of new Mk8 STs as soon as they became available – they know they’ll be tunable as hell, and the aftermarket parts will be big business!