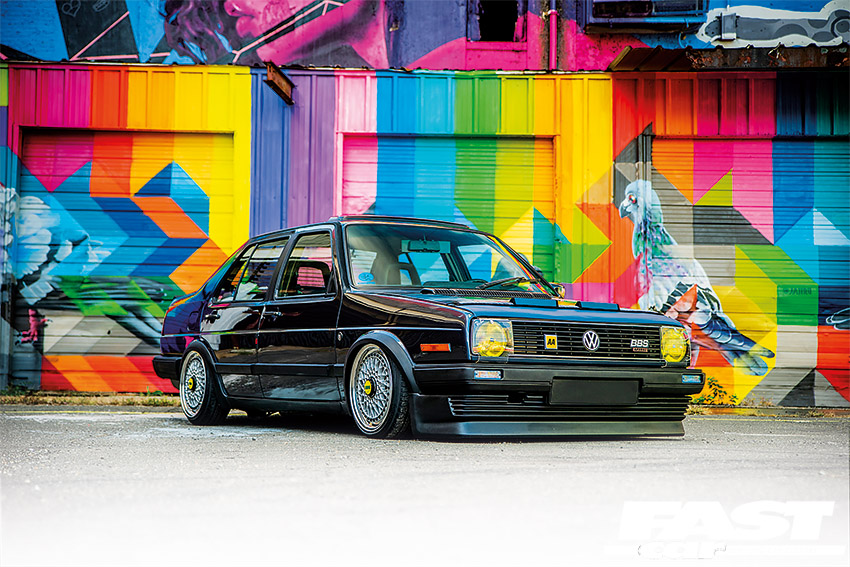 We take a look at one of the coolest modified VW Jetta Mk2 builds we’ve seen, not least because it’s the rare GLI Helios Edition with a VR6 engine under the bonnet!

They say everything happens for a reason. This rings true for more than just life events. It can happen to anyone at any time with anything, and in this instance that ‘thing’ happens to be the wonderful machine that Angel Fuentes, from Newark, New Jersey, has built and is here for you to see. Now, Angel wasn’t always a fan of Volkswagens until a lowered Mk2 Golf rolled in at a local car meet and, as they say, it was love at first sight!

The modified VW Jetta Mk2 before you isn’t his first foray into the Mk2 world, though, as he’s had a run of cars, but this is the gem! 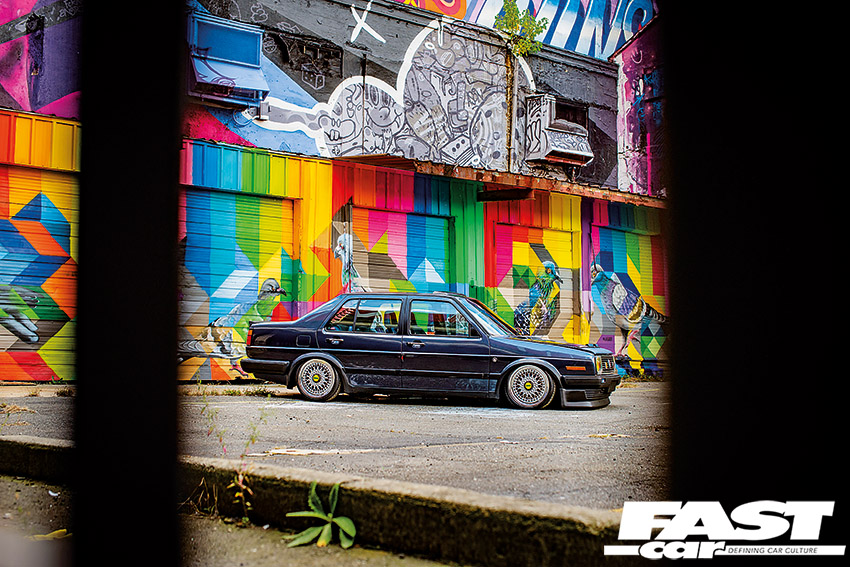 For the past three years Angel has had the joy of building this glorious creation, so let’s take a trip down memory lane. Previously, he’d had his hands deep in an ’89 Jetta coupe that was VR6 swapped. Just know that Angel’s love of the “old school cool” and period correctness in his choice of parts had this car dressed to impress. From the Ray-Ban headlight covers to bits like the Fischer umbrella holders the car was a head turner, in its own right. Angel planned to get a bit of body work done to complete the car, then it happened on the way home from a show with his Jersey Hooligan crew – the thing we all fear came to light. He was cut off in traffic by not one, but two cars at the same moment. In the attempt to avoid both instances he lost control and ploughed into a road barrier. After a flatbed assessment, he and the crew quickly assessed that the car was bent beyond repair – yep, it would most likely be totalled. While the car continued its journey on the tow home, as you could imagine, Angel was heartbroken. Word soon spread about what had happened and the local VW community was abuzz with the loss and everyone was reaching out to help. Enter a phone call from long-time VW enthusiast, Juan Vargas, the very next day. Juan just happened to have a rare 89 Jetta GLI Helios Edition, that he was willing to part ways with. Needless to say, a deal was soon made. 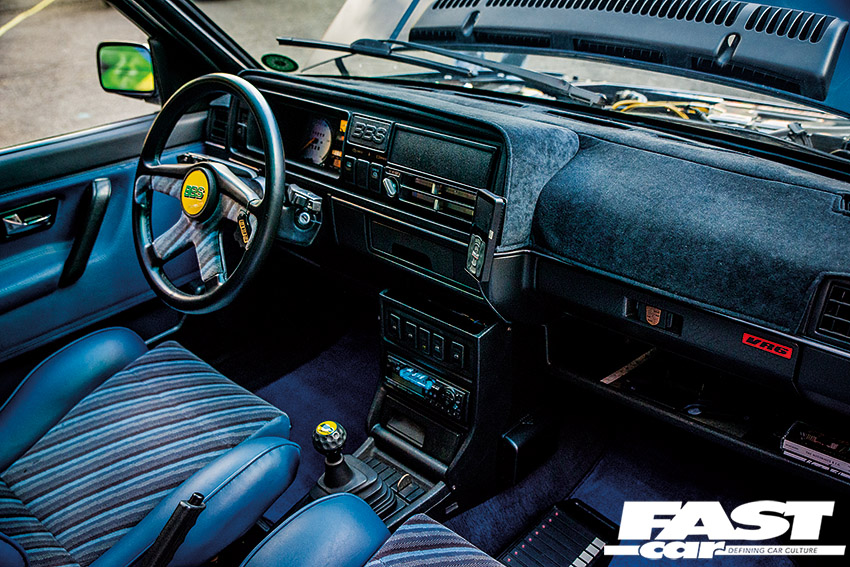 Angel picked up the car and straight away he wholeheartedly admitted that the colour was one of the biggest deciding factors of choosing this car over others; “The colour is the most beautiful shade VW offered”, “LA5Y Helios Blue Metallic!”. The car wasn’t in the best shape, but it was solid and was a great canvas to start with. Thus, the creative juice soon began to flow. Parts were being swapped over from the wrecked coupe, including the motor. Evenings, afternoons, and weekends were consumed with pulling everything off of the coupe shell and getting ready to install it into the Helios. The new car was soon readied for its heart transplant at my house, where the 2.0-litre 16v was quickly pulled to make way for the healthy 2.8 VR6, which was transplanted from the coupe. The car quickly began to take shape. The bay was prepped and coated, the subframes installed and then, in went the motor. With the help of many of the Jersey Hooligans, the man they call “The Whisperer” and Angel’s close friend, Roberto “Berto” Gonzalez, the motor fired up one afternoon and it was time to “work out”! Not many can say that they’ve physically touched every part of their build, but Angel definitely can. The intricacies involved with the details of this car are simply mind blowing. If you don’t pay attention to what you’re looking at, you’ll definitely miss something. 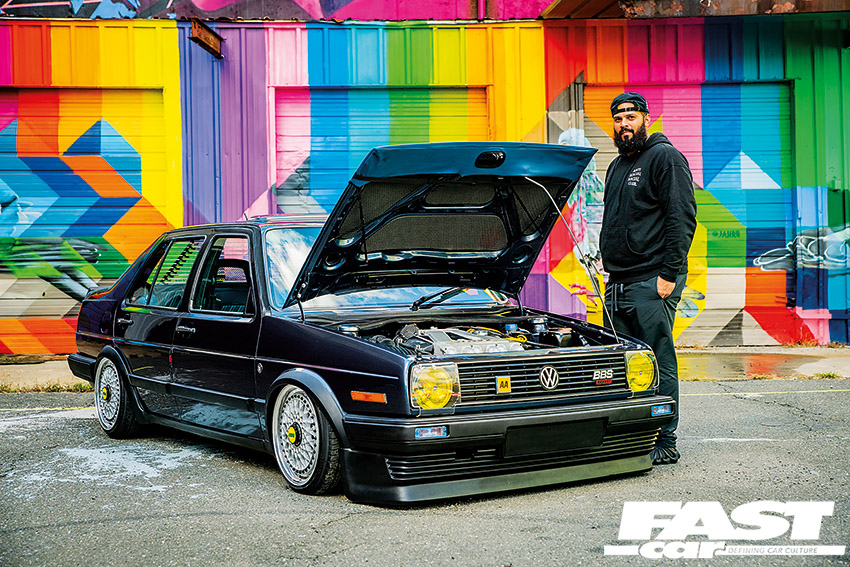 Once the VW Jetta Mk2 was mobile, off to Angel’s garage it went. Admittedly, Angel states that the hardest part about this entire build was, “…removing all the glue…”. Unfortunately, many things were glued on and not attached with OEM connectors and clips. Being self-proclaimed “anal” he had the tedious task of obtaining and installing all the necessary OEM hardware, ahead of him. Once he’d sourced all this the heavy work began. The interior kept its Helios look, where the seats retained their Helios pattern centres, while the bolsters and door cards were all treated with custom blue leather, as well as the fishnet headrests. The door cards shine with the addition of polished inner door pulls. Remember the Fischer umbrella holder I mentioned earlier? Well, that is mounted on the side of the seat with an original BBS umbrella. The plastic lower seat switch panels have been replaced with aluminium ones that have been powder coated and have raised polished “RECARO” letters along with original Recaro seat adjusters. The four-spoke BBS steering wheel, donning a yellow BBS DesignLine horn button, has also been Helios’d, with the inserts being wrapped in Helios material as well. Look up to see all black matching headliner, sunroof panel and sun-visors, with a chrome Golde sunroof crank from an air-cooled elder. Look to the shift gear and you find a BFI black leather golf ball shift knob with its own yellow BBS DesignLine coin logo atop. The Votex console above allows Angel to control his power window switches and Kenwood cassette head unit which is connected to Kenwood Exceleron 5.25″ speakers all around (of course OEM Aktiv speaker covers on the doors). Then your eyes quickly dart to the left where you see the Nothelle gas pedal and custom A/G Designs brake and clutch pedals to match. I told you before, if you don’t train your eyes to notice things, you WILL miss something. Custom blue BBS VR6 floor mats line the floors, highlighted by a blue camouflage Supreme fire extinguisher and Fischer cassette tape holder and cup holder. Looking through the steering wheel you will find a set of Premier gauges with yellow needles. Since the radio has been moved to the Votex console there is an OEM VW radio blank and BBS unused switch cover dressing up the bezel. And the hits keep coming. Below the dash you will find the Euro deep pockets, deep non A/C glove box and Euro upper ash tray where the vents would normally live. 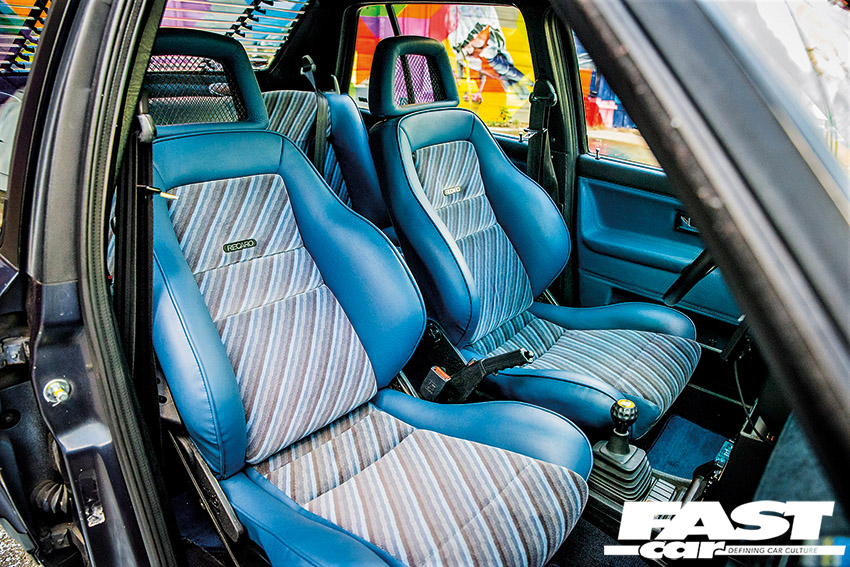 This modified VW Jetta Mk2 is simply marvellous. Just one look at the outside makes you drool. The car sits on Air Lift Slam Series suspension all around. The trunk holds the custom powder coated sparkle silver air tank with a custom matching Helios material cover. Notably one of Angel’s favourite parts of the car are the wheels, which are BBS RS 133s, which were sourced from Instagram but needed work. With the legendary touch of Ariel at Perfect Metal Finishing, they are the work of art you see before you. They are 7.5×16” all around with face mounted sparkle silver centres and black powder coated wheels bolts and inner barrels. But it doesn’t stop there. The spare is split donut wheel! A three-piece 5×16″ BBS face and lip on a donut to match the four on the outside… game changer sitting in a custom false floor in there! The body is no exception to Angel’s rule. The Euro front and rear bumpers with blue Fifft turn signals, Euro seven-slat early single round grille, Ray-Ban headlight covers, custom BBS VR6 grille badge, German AA support badge, Hella H4 round lights with yellow Laminex, a MetalPlast hood vent cover, Bonrath single wiper, and a genuine BBS lower chin spoiler finish off the front. Out back there’s Hella Euro OEM taillights and Hella Heckblende, Foha rear trunk spoiler, and Jetta GTX badge with the small VR6 badge underneath. 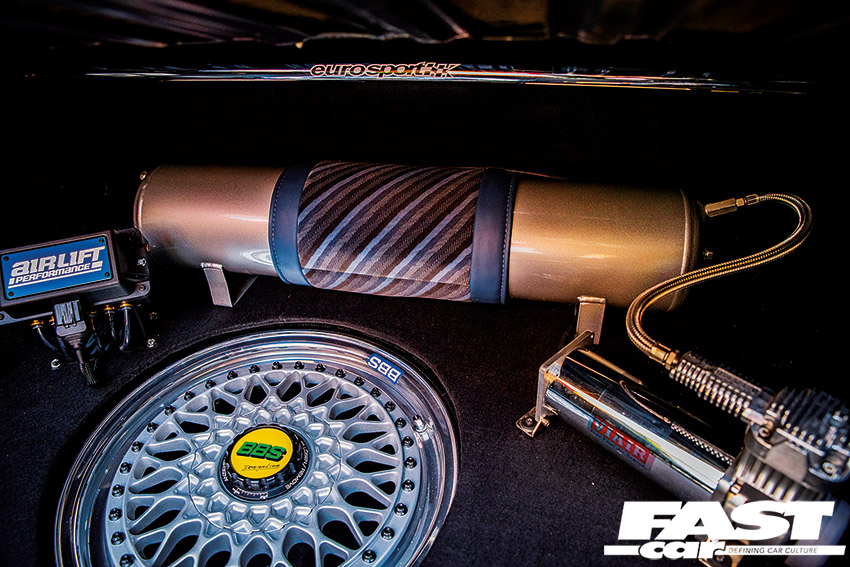 There are so many details to be seen on this modified VW Jetta Mk2, it’s unbelievable. I’m sure that some have been missed here but are present in the Dub Details! When we asked Angel if there were one thing he would go back and change, the answer was a resounding, “NOTHING! I’d do it all again if I had to. Of course, Angel is proud of what he’s done, with his greatest critic being his son, Mason. “The best reaction I could ever ask for, is the look on his face when I start and air up the car!”. The car is well observed everywhere and Angel is definitely a “people person” with him stating that he’d “chosen to do it all for the many friends and extended family that he’s made while building cars”. Like the rest of parts hoarders, he “loves the hunt for rare parts!”. In the end, he’s built this wonderful modified VW Jetta Mk2 that I think we all can appreciate, completely. When asked if there were any other interests he has it was a solid answer of sneakers and urban street wear, yeah more expensive things to be bought!

Who knows what Mr. Fuentes’ next project will be, but he has hinted upon a ‘Merica build of a Chevy dually made to match the Helios Jetta. If it even comes remotely close to being finished to a similar standard, then we’re sure it will be boss! Bravo Mr. Fuentes, bravo! 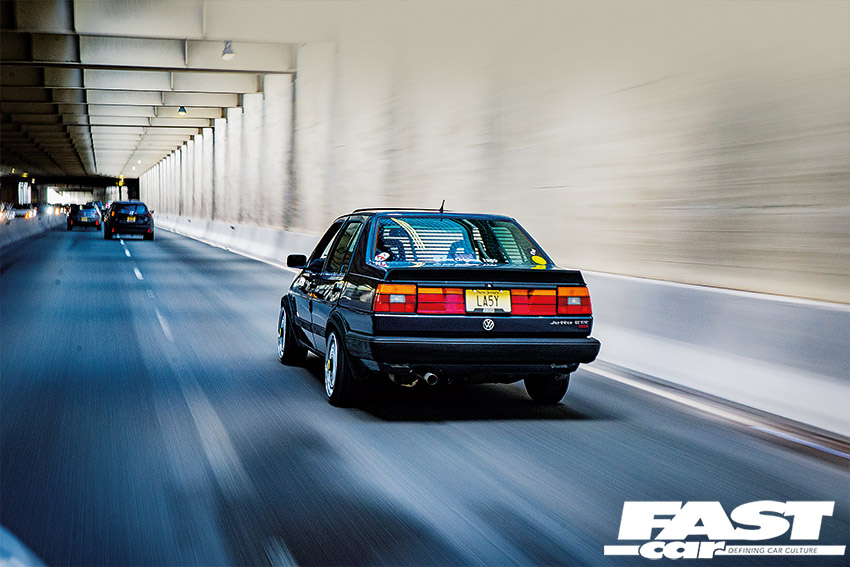