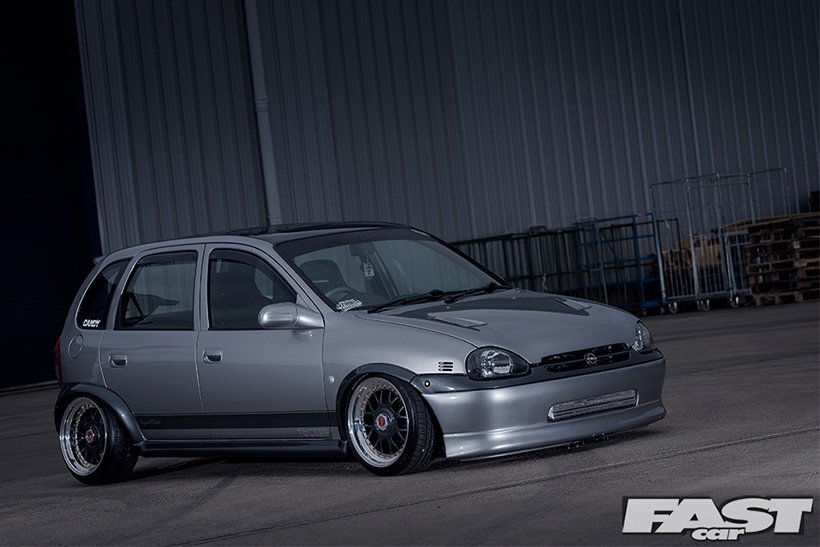 When asked to conjure up an image of a car that’s both fast and luxurious, what pops into your head? A German Autobahnsmashing hyper saloon, perhaps? Or pretty much any vehicle that’s ever made an appearance in the James Bond film franchise? All justifiable answers, but we bet our last McChicken Nugget that the humble Vauxhall Corsa B wouldn’t feature very highly in your list.

Don’t get us wrong, the mighty Corsa B is a fantastic everyday car. But pretty much everyone would look elsewhere if ‘performance’ and ‘mod cons’ featured close to the top of your want-list. Everyone except our man Dan West here, that is. He has single-handedly spent the last seven years transforming his five-door, 1.4 GLS-spec’d example of Vauxhall’s most popular little hatchback into a torque steering, leather-clad marvel machine. And we reckon when you discover its finer details, you might just change your mind about what this unassuming model is capable of, if you put your mind to it…

The story starts back in 2005, when Dan proudly became the owner of his first Corsa B as his first car. “Being only a stone’s throw from Santa Pod, and with my dad being a mechanic, I’ve always had an interest in cars,” he says. “Watching my dad fixing them inspired me. I really liked the idea of making a car your own…” With a few light modifications throughout his many years of ownership, the first Corsa eventually succumbed to rust though, ending up in the great big scrapheap in the sky.

Dan wasn’t done with modified Vauxhall Corsas though. Rather taken with what the hatchback was able to offer, this, his second car, ended up on his drive in 2010. “It was a non-runner that I bought for its shell,” says Dan. “The idea was to swap a few of the better parts over from my last car and then perform an engine swap into it.” Dan admits he wasn’t the best with a set of tools back then. But with the help of his brother, his dad and a few internet forums, the strip-down had well and truly begun…

So instead of starting with a few subtle bodywork mods like most people do, Dan hit the road to find a bigger engine to slide inside. “I found a 2-litre ‘Redtop’ engine from a Cavalier, along with a set of conversion parts chucked in as a job lot,” he recalls.

A couple of van trips with mates later, the engine was home and in the car in no time. “On the way to the MoT centre, it suffered a massive oil pressure failure due to a dodgy pump, though!” Dan painfully tells us. So no less than a week after it had all begun, the engine was back out of the car, and the boys were back to square one.

Understandably disheartened by the whole experience, Dan thankfully went with the ‘glass half full’ approach with the project at this stage. “This time I wasn’t going to cut any corners,” he explains. A few days later, and a boosted 2-litre lump was now sitting in his garage, taken from a Calibra and offering up bags of potential. “This one was rebuilt properly, with new bolts, gaskets pumps and bearings.” While the engine was still out of the car, Dan’s preparation work extended to adding a Quaife LSD to the standard 6-speed gearbox, along with transforming the chassis of the Corsa with coilovers, bigger brakes and a heap more goodies to cope with the extra power. “I wanted to keep it subtle and hide everything I could behind the bumper,” Dan smiles.

Remember, at this stage, the five-door car looked nigh-on standard, meaning more than a few confused faces were seen in Dan’s rear-view mirror once he got the engine running and took it for a few blasts. The car was enjoyed thoroughly in this way for a couple of years, before Dan got the urge to begin fiddling again…

“By 2013, I’d bought another car for daily duties, meaning the Corsa could become a bit more extreme,” he continues. Dan’s car passions had extended to the Euro and JDM styles that were becoming increasingly popular, resulting in a set of BBS splits being snapped up, and the coilovers wound even further down.

“I started getting good feedback from people, but I still wasn’t entirely happy with the way the car looked.” The solution came in the form of buying new, wider dishes for his BBSs, along with some wide arch extensions, which unsurprisingly warranted a lot of cutting and smoothing in order to avoid rubbing. While this was getting done, Dan extended the smoothing theme to most of the other panels of the car, creating a unique but classy exterior aesthetic from which to build on.

Lower, wider and faster, then. Surely things couldn’t get much better? “Due to the engine’s sump sitting so low, I couldn’t drive the car like I wanted to, which absolutely defeated the whole point of the car for me,” Dan explains of his static woes.

Luckily, the solution lay just around the corner at Rayvern Hydraulics; with the master Ray soon whipping up an adjustable suspension set up to allow Dan to switch ride height in a matter of seconds. The hardware includes Ray’s custom struts up front, and Gaz shocks on the rear, both using Firestone air bags to supply the bouncy stuff. “When it’s low, the sump literally sits on the ground, but when I want to drive it hard, I can return it to an almost standard ride height!” A proud Dan grins.

Spurred on by the suspension transformation, Dan proceeded in reworking both the inside and outside of the Corsa to bring them up to his high standards. This included a full leather interior re-trim, complete with touches like the Grip Royal steering wheel and custom hydro/ICE boot install. The outside was cleaned up with a full two-tone respray and, more recently, a set of sharp Image split rims to keep onlookers on their toes.

You may still be thinking, why spend so much effort transforming a Corsa? To which Dan has perhaps the perfect answer: “I came close to stripping the car down on a few occasions, but there was something about it I always loved. Being able to chop and change styles and parts guilt-free meant it didn’t matter how much I cut or what I did to it. And that’s half of the fun of modifying a car for me.”

We couldn’t agree more. It’s not what you start with, it’s what you make of it!