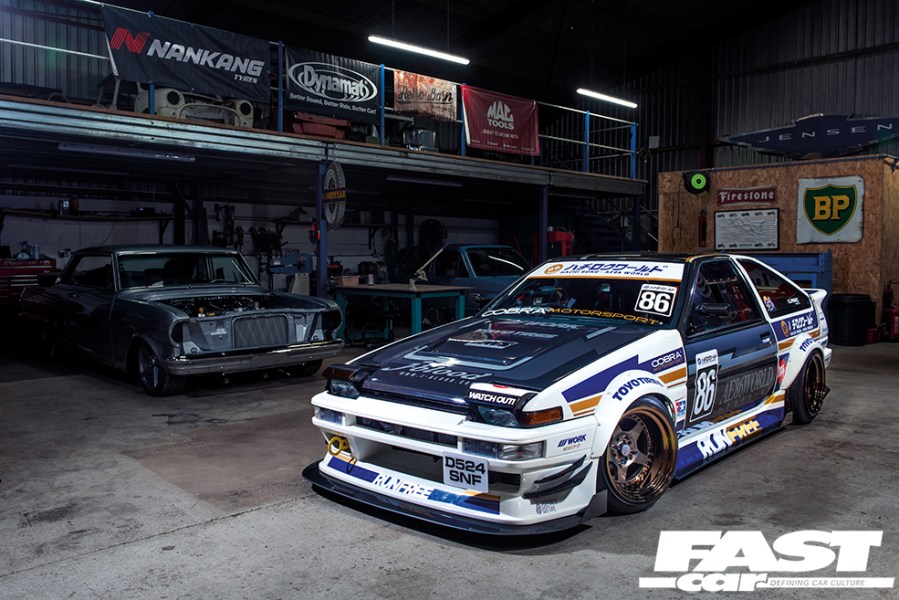 This was only ever meant to be a quick and easy tidy-up. But, as we revealed in a world-exclusive back in March, when Toyota superfan Phil Jones and Corolla specialists AE86 World get together, a masterpiece of high-end automotive artwork is the result as this modified Toyota Corolla AE86 will now demonstrate.

It’s often the case that one sole decision is enough to set off the domino effect that transforms a simple project into a really complicated one. For Phil Jones, it was the age-old AE86 question: Levin or Trueno? There are other considerations, naturally – three-door hatchback or two-door coupe; original ‘zenki’ or ‘kouki’ facelift – but the face is all-important… the Levin had fixed headlights, the Trueno had pop-ups. So you make your choice between lightweight simplicity or oh-so-eighties style.

The decision made here was to swap this Corolla’s factory-original Trueno nose for a Levin setup – something which, as you can see, didn’t happen. There are, of course, many checkpoints along the timeline between that point and this – suffice it to say that Phil has gone all-in. We’ll spare his bank manager the palpitations of revealing the total cost of the build, but let’s just say that for the same outlay he could have a shiny new Supra sitting on the drive right now, plus a new GT86 to match, instead of this old hachi-roku. Passion trumps logic every time, doesn’t it? 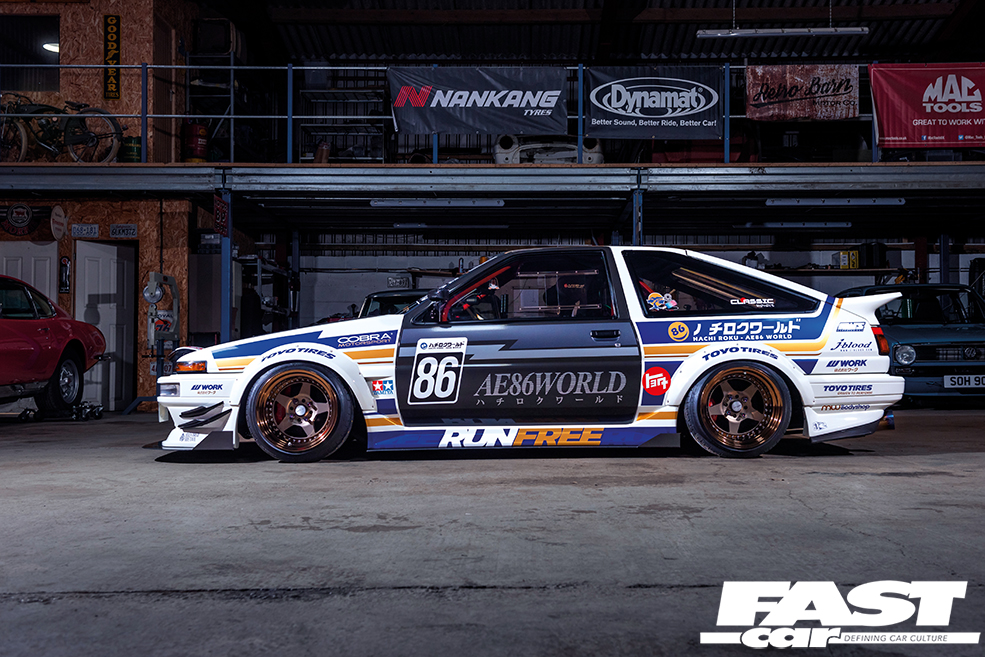 Whichever way it went down, however, Phil needed a Toyota AE86 in his life. And that’s not hyperbole – this was no mere frivolous desire, this was a deep-seated and fundamental life requirement. “Growing up in Ireland, in the middle of one of the greatest car cultures possibly anywhere in the world outside of Japan, meant that you couldn’t put the bins out without seeing something special passing by,” he recalls. “The car scene and the meets were huge, we would take over whole towns at the weekend. And one vehicle always stood out, and still does today – ‘the twin-cam’, as we called it, was just head-and-shoulders above the rest, and it was something every young car enthusiast dreamed of owning!”

At this time the import car scene was really exploding in Ireland, and through his twenties Phil owned a couple of AE86s as well as a Nissan 180SX, Toyota Starlet Turbo, MR2 Turbo, Celica GT-Four… the stuff that JDM fantasies are made of. And now, relocated to England and a decade or so more grown-up (in relative terms, at least), it was time for another. Sourced from Classic Imports in Bradford a couple of years ago, the latest acquisition is a 1986 Trueno; it arrived in fairly tidy condition, with a few interior bits missing but the potential to make a nice project. 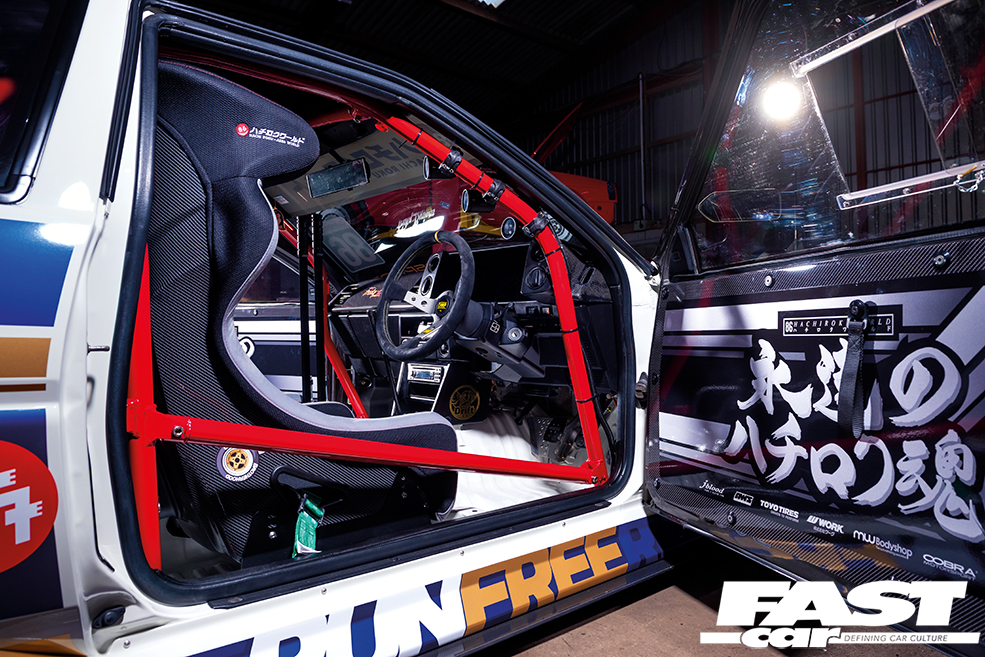 The car in question is in GTV spec, and it’s worth a momentary aside to explain what that means. You see, various spec levels were offered in different markets, and in its native Japanese market you could buy the 4A-GE-engined AE86 in three levels – GT, GT-APEX and GTV. The first of these was the base spec, while debate has raged ever since about which of the latter two is preferable: the GT-APEX came with electric windows and mirrors, power-steering, foglights and a boot spoiler, while the GTV had none of those things. They also had different wheels, steering wheels, sticker packs, gauges, grilles and seats. In essence, the GT-APEX is the fully-loaded one, and the GTV is the more pure and motorsporty one.

“I originally intended just to change the front bumper and leave it at that – how differently things have turned out!” he laughs. “It’s consumed my life, every day in some shape or form, for the last couple of years.”

At this point, we ought to introduce the other key player in the story, Chris Gray at AE86 World in Ireland. Few enthusiasts can boast the hachi-roku expertise of this fella (see boxout), and when Phil first contacted Chris to order up a new front bumper, it was never destined to be a soulless transaction. 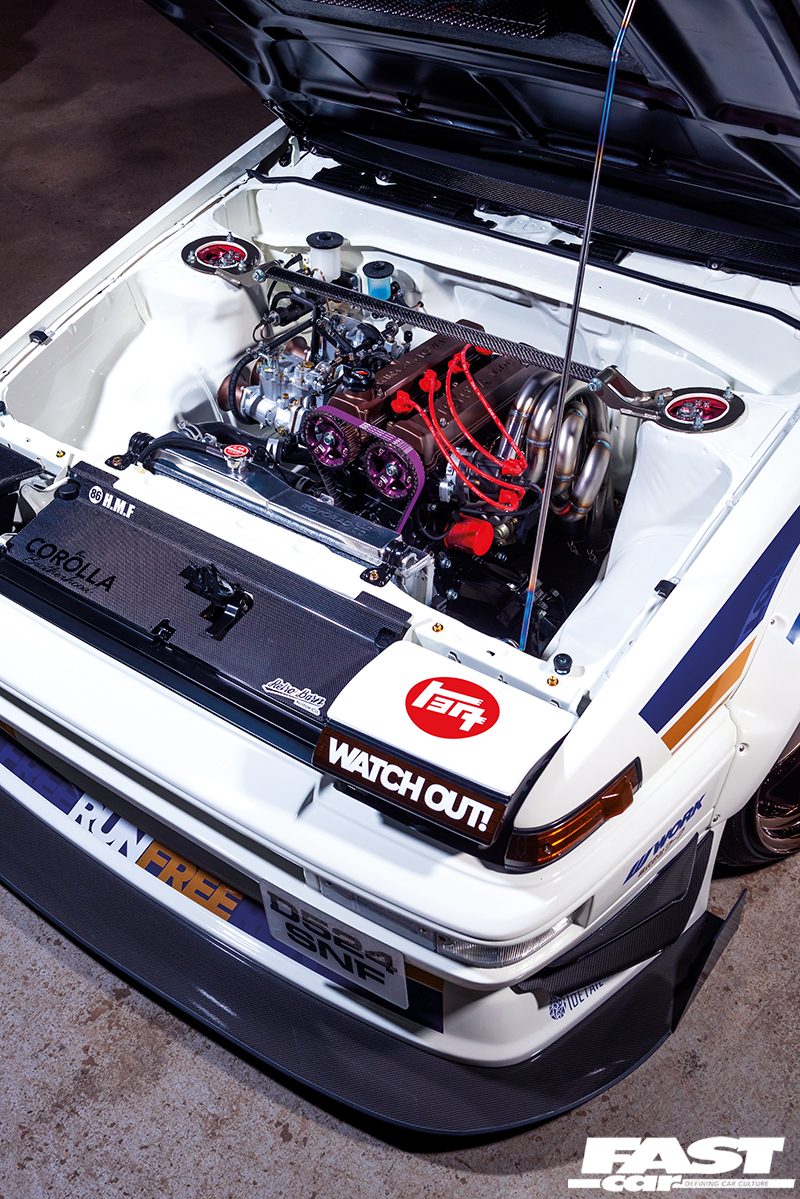 Chris takes up the story: “Rather than simply sell him parts for a Levin conversion, I talked it through with Phil to see what he actually wanted from the car. I persuaded him to keep the Trueno front, due to it being rarer now than ever. Phil was toying with the idea of building a show car; we hit it off and had regular lengthy chats about the show scene, AE86s, and Phil’s dream to wow the scene with his dream car. Fast-forward a while and we’re having a meeting in person to discuss a spec list, from wheels and kit to engine specs, and the overall look to go for. From day one, he’s been a pleasure to work with – we’re on the same level, and our ideas complement one another’s. Being in charge of this project to an extent let me also create one of the best AE86s in the world.”

Well, you won’t hear any arguments from us on that one. With a finger in every Toyota-flavoured pie, Chris had the contacts and the know-how to cherry-pick the best parts from the OEM and aftermarket options, and source them all from legitimate places to ensure the car could be done right.

“There were constant shipments arriving from Japan,” he grins. “Phil gave me full freedom to show just what we can do at AE86 World. Guiding him with the best parts available, we came up with a combination like no other: from Run Free Japan aero to carbon panels and custom-made parts, the detail in the car is incredible.” 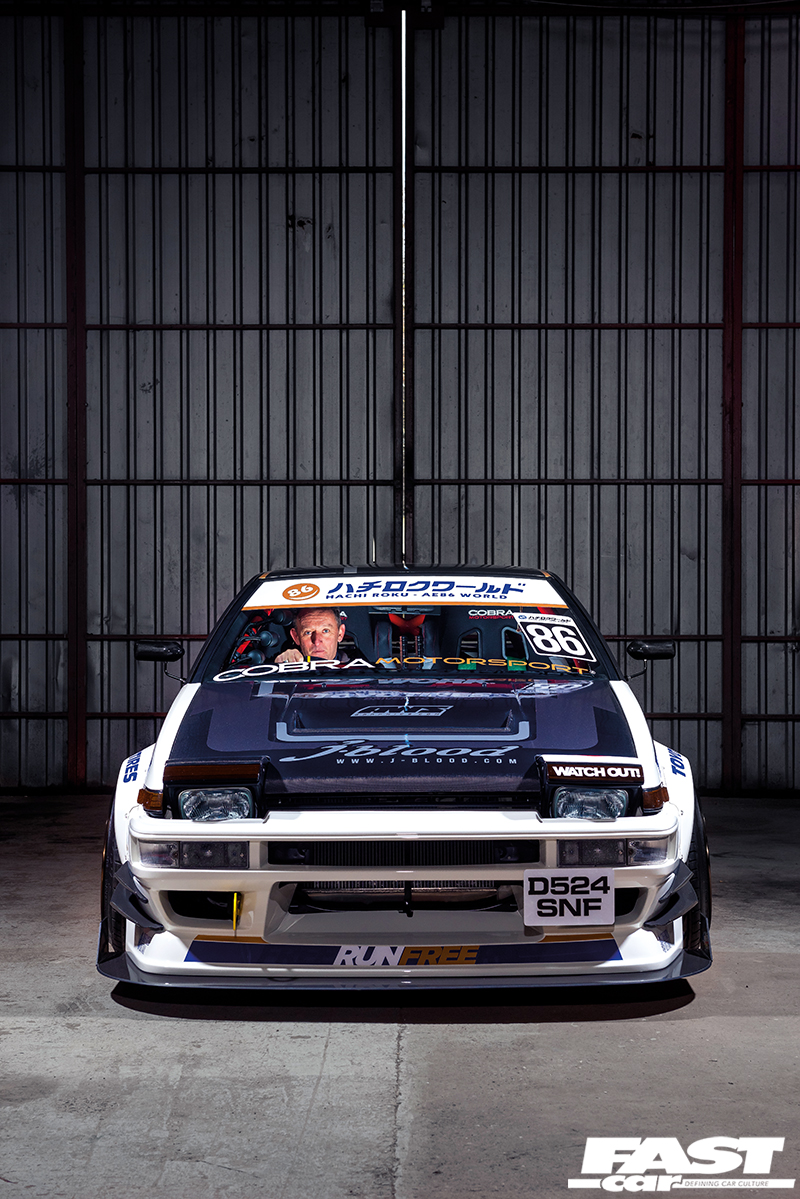 Chris’s long history in the scene has helpfully given him a lot of clout, and AE86 World has real influence and a lot of direct connections; as a result, the guys were able to convince J-Blood to create a custom carbon bonnet at short notice, and once this had been FedEx air-freighted to Ireland, it wasn’t long before the new wheels were following on another plane. Phil had a very clear idea of what he wanted in terms of style, dimensions, fitment and finish, and Chris made it happen – he got on the blower to WORK Wheels Japan and had a set of one-off Meister CR01 split-rims made up, with WORK allowing them to leapfrog to the top of the order list. These connections, they pay off. You can’t buy your way into this sort of specialist treatment, it’s hard-won by honour and respect.

When it came to assembling the body into its fresh new image, MW Bodyshop in Olney was charged with the task of making sense of this supremely high-end and geeky jigsaw puzzle. “They did an incredible job,” Chris enthuses. “Phil and I both have such high standards that second-best simply would not do. It had to be right, and that’s why the project only involved the best in the country to build this car to this level. Just look at the detail! The CBY arches, for example – although they’re very good to begin with, they were never were made to fit like this; MW panel-gapped the car to perfection, and the arches and kit to the millimetre.” 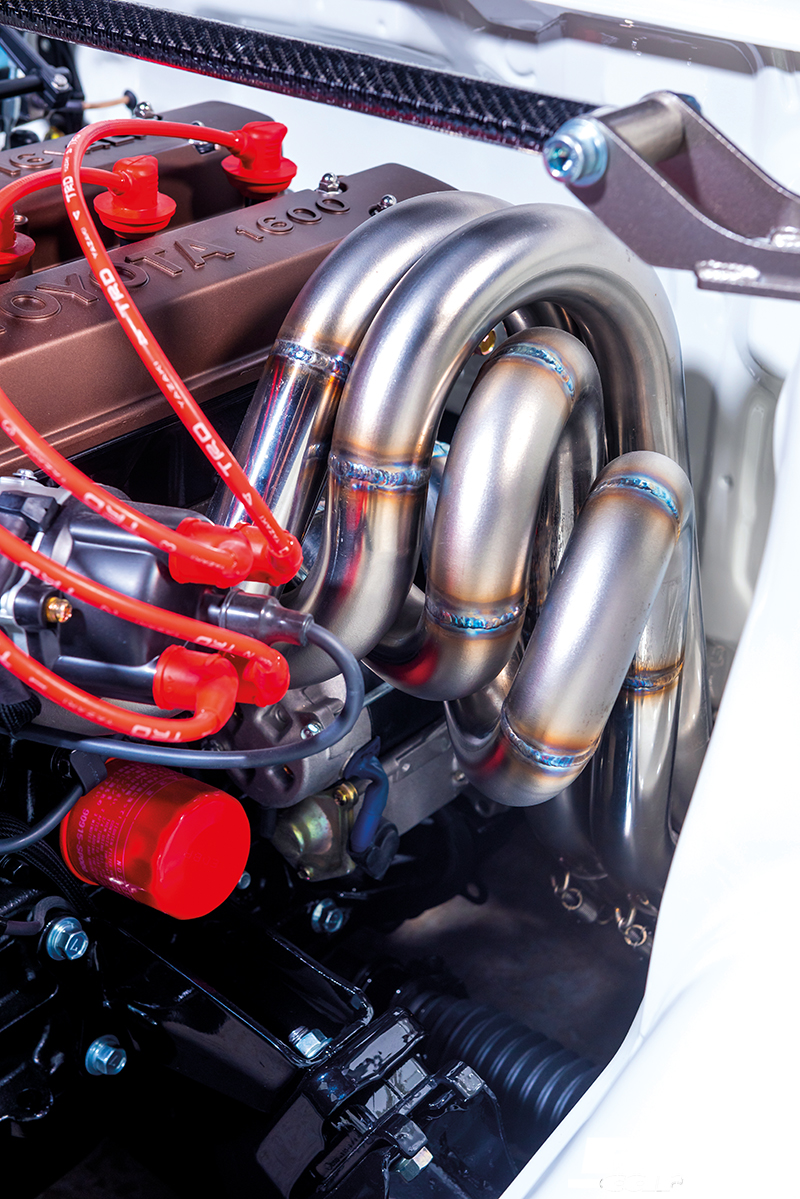 With the bodywork done and painted in Toyota 041 White, thoughts turned to graphics. Phil and Chris shared a vision for the car, it needed to look fresh, unique, and like nothing else out there; a ’90s-style race car, built to a modern-day standard and finish. Chris only had one name in mind for the design, and that was Andrew at AWS Graphics in New Zealand; what followed were many, many hours of late-night calls, Skype videos and magazine research – they sketched, analysed, modified and altered, and finally nailed it. The graphics were fully designed up, and then they entrusted the application process to 3SixtyWraps.

“Having been involved in the car scene for twenty years, and running AE86 World, I’ve seen near-enough everything,” says Chris. “And I have no doubt that this is one of the best! Being a part of it, and working with Phil to make this car, has been my honour. Despite Covid-19 and more, we planned and made everything run as smoothly as possible, and for a build of this quality the planning paid off; I can imagine the spectators walking around the car at shows and just seeing more and more detail. With all the bespoke touches and rare parts inside, outside and under the bonnet, it’s a work of art. I hope you all enjoy it as much as I have being a part of it!” 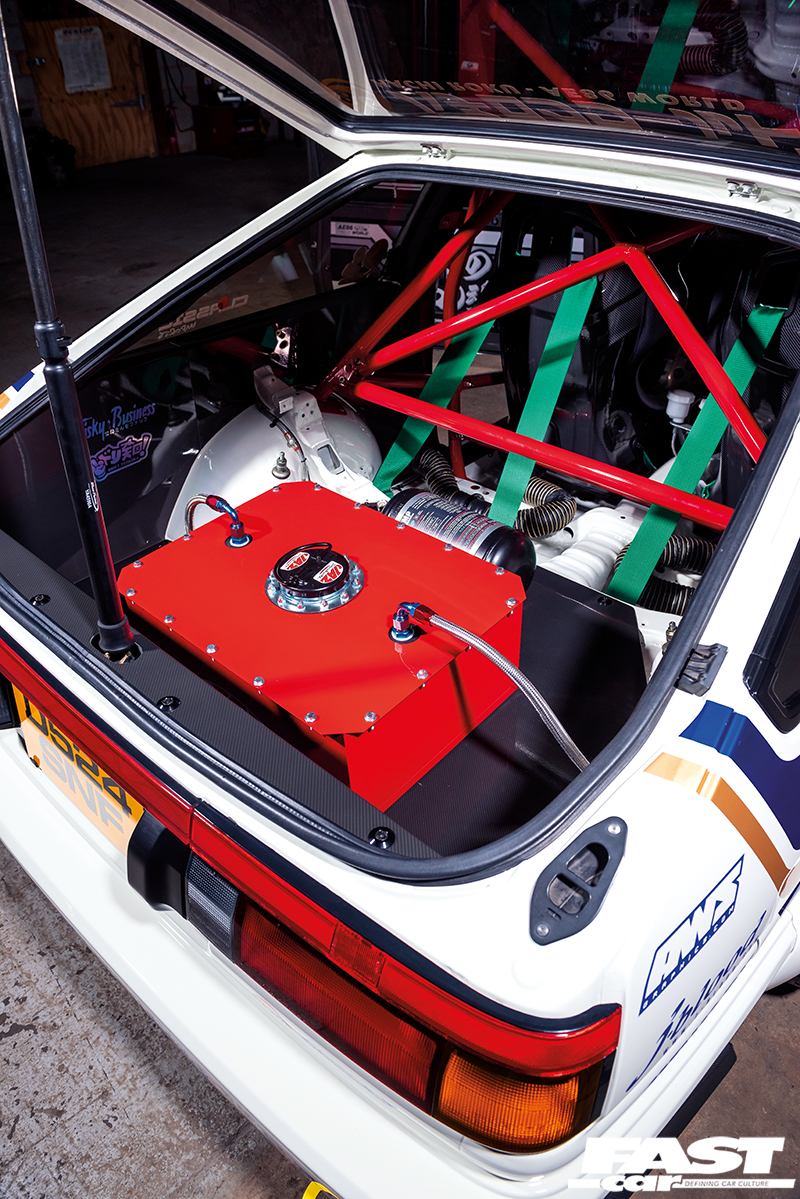 There’s no doubt about it – there are AE86s and there are AE86s… and then there’s this modified Toyota Corolla AE86. An otherworldly, unique, astonishingly detailed and beautifully crafted example of the breed, paying respectful tribute to the past while looking toward the future.

The final word must go to Phil, as he stands beside the physical manifestation of his wildest dreams with a look of wonder on his face. “I’m really just a normal everyday guy,” he says. “I don’t have an Instagram following and I’d still rather call than text – I’m into old-school car modification as it was when I was a kid! I’ve never taken on a build to this standard before, and I think it’s gone really well for a first attempt… What inspired me to go this far? I got carried away and became obsessed with making it into the best possible example it could be.” And he’s not kidding. So fastidious is his quest for perfection that until the day of the shoot, Phil had never even sat in the driver’s seat. And not only that, but the immaculately rebuilt and modified engine has never been fired into life, as Phil doesn’t want the hot engine gases to tarnish the flawlessly fabricated exhaust manifold. Hell, there’s not even any fluid in the brake lines as he wants the discs to remain free from friction marks! This is truly a show build like no other, an exquisite piece of automotive artwork to be enjoyed with the eyes, rather than the seat of the pants. That’s right. If drooling over these pictures has you hankering to see this race-ready machine flying sideways, vapourising rubber and screaming like a banshee round some circuit or another, you’ll be sorely disappointed, as that’s about as far from Phil’s future plans as you could get. “For me, it’s all about enjoying the car for the flawless piece of sculpture that it is. I’ve invested so much time and money into getting it to this level and get such an enormous amount of pride and enjoyment just from looking at the thing, that I’ve really no intention of driving it. If that makes me a bit weird, then so be it, as I’ve built the car for me and no-one else. I’m just hoping that I’ll be able to get it to as many shows as possible this year, in both the UK and Europe, and have some fun. It’s been a long, hard slog to build it and my goal was always a Fast Car front cover. I think that’s secretly every car guy’s dream!”

Well, we’re pleased to oblige. This stellar Trueno has more than earned its place. Phil’s project was never meant to go this far, but we can all be very happy that it did.