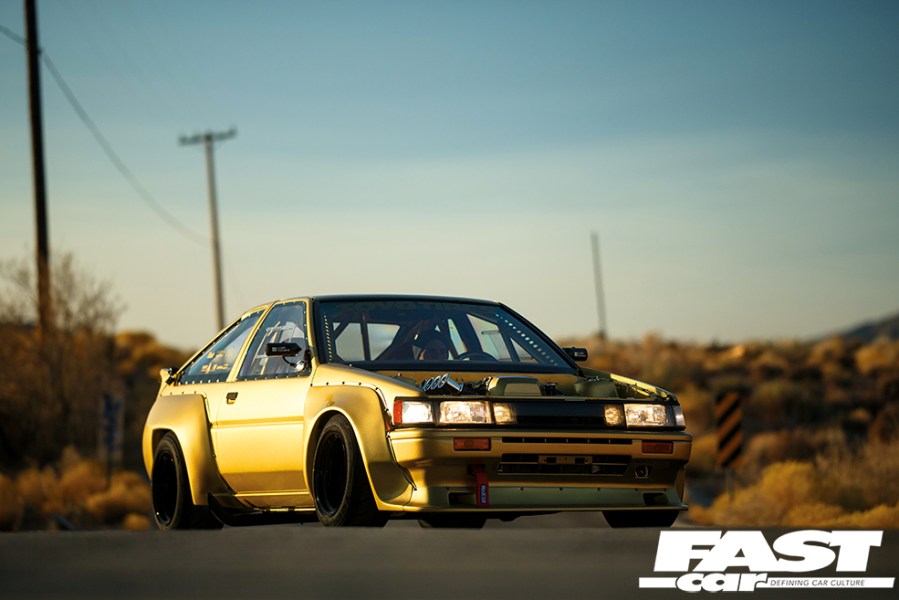 Having seen his friends triumph at SEMA, Richard Gutierrez wanted in on the action. The resulting modified Toyota AE86 with a BEAMS engine is a solid-gold winner – although his deeply personal project was never just about scooping trophies. No, this flawless show-stopper’s soul yearns for the track…

The old saying goes that you should dress for the job you want, rather than the one you have. This is a notion that’s really captured people’s imagination over the generations: Roxette were telling us to get dressed for success back in 1988, S Club 7 ensured their place in posterity by suggesting we reach for the stars, it’s a relatable and practical solution to the inevitable conceptual ennui we find ourselves trudging through in the day-to-day. Better things are on the horizon, you’ve just got to reach for them.

Take the gold paintwork on this particularly spangly modified Toyota AE86. Gold is the colour of winners, it’s the top of the podium, it’s something Spandau Ballet believed made you indestructible… and so it’s come to pass here, like a pantone reinterpretation of the concept of nominative determinism. Pigmental determinism, perhaps? Whatever, it worked – this gleaming golden hachi-roku made its debut at SEMA 2019 and immediately scooped a top-40 place in the Battle of the Builders, a top-10 in the Battle of the Builders Sport Compact class, a place in the Toyo Tires Treadpass tent, and 2nd place in the JE Pistons Masters of Motors category. Given the quality and breadth of what turns up at SEMA, it really is a phenomenal result for a car built not by a big-budget custom shop, but a plumber who just happens to like making cool cars in his spare time. 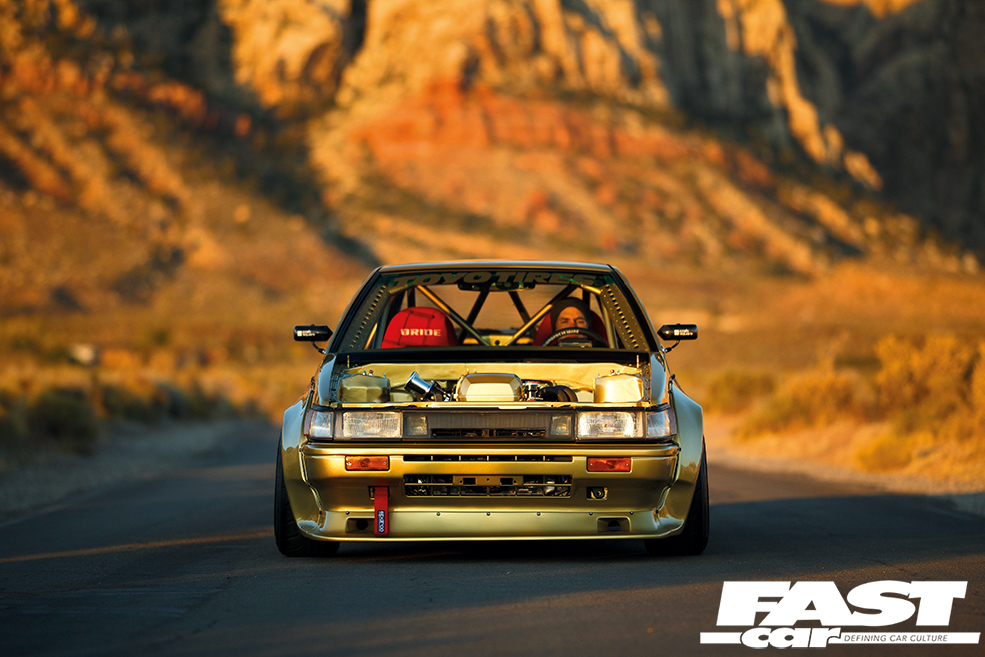 That’s right – it’s not just the magical qualities of gold which have serendipitously led to these stellar successes, but the grit and determination of Richard Gutierrez (aka Riko), who’s basically spent his life wanting to build a car of this quality and, now that he has, he’s really got a taste for it.

“I’ve been building cars since 2005 – they reflect my life and my passion,” he explains. “My first build was a Laguna Blue Honda S2000 with the full Mugen treatment; when things got rough with the recession I sold my cars and drove an EG Civic hatchback for three years, but then things turned around and I was able to have a Nismo 370Z, a 700bhp Nissan GT-R with an Amuse kit, a TechArt Porsche 997 Turbo… and today all the cars I’ve got are matching in my own custom shade of gold paint: my RWB Yoshiwara Porsche 993, my 1985 Corolla AE86 GTS, my Rocket Bunny 240SX with LS1 swap, and now this N3 AE86 SEMA build.” 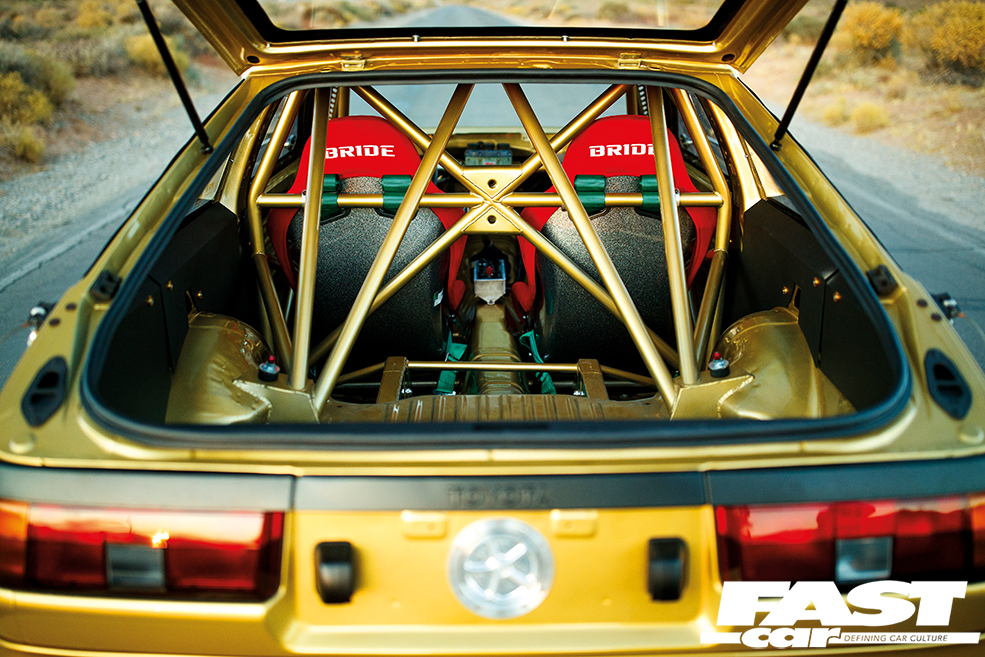 The regular visits to SEMA speak for themselves – Riko is a man with an eye for quality; he may be prolific in his work, but every micron of each project is superbly planned out and sublimely finished, as you can see from the photos laid out here before you. This AE86 also represents an interesting twist, as his previous SEMA visits had been on RWB Porsche duty rather than actually in the show – doing rallies, hanging out with hotel valets… but in 2018 something changed. “I saw how successful two of my friends were displaying their own builds at SEMA, and how much exposure it got them,” he recalls. “Khyzyl Saleem (@thekyza) with his E30 and Scott Girondo (@dunk186) with his Honda K-swapped Porsche 911 – I wanted some of that shine. But what to bring? I knew budget would be important, and also the time frame. And at the time I had a 1984 AE86 SR5 shell sitting in my backyard…”

Decision made, then. The base-model Corolla would be reinvented as a show-stopper, using Riko’s unique style to prove to the world that there’s life in the hachi-roku yet. The quality, the fabrication, the creativity, and overall the vision – this would be an AE86 like no other. 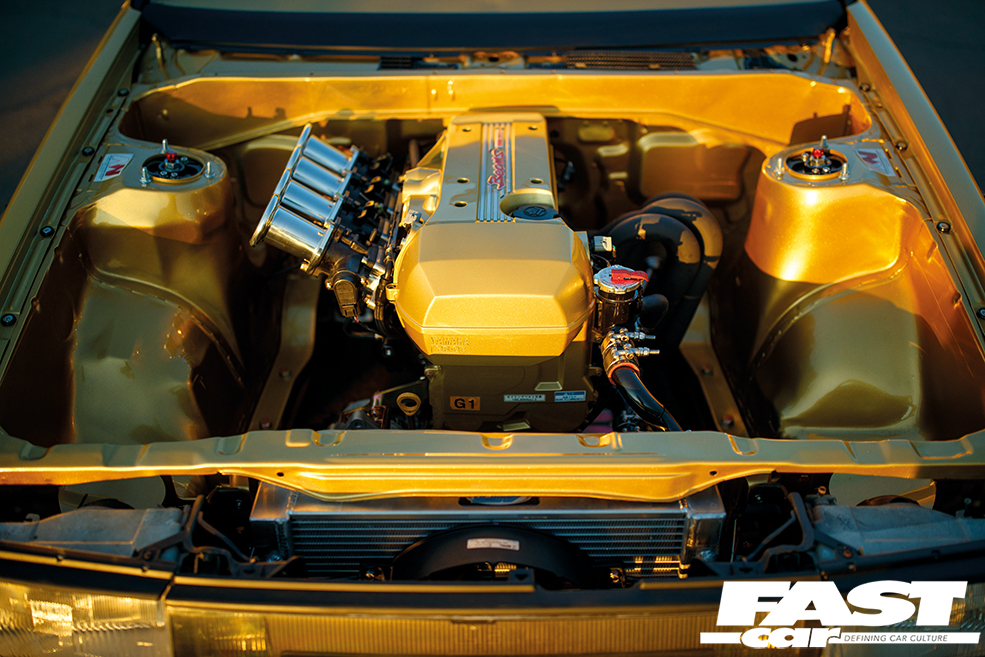 The SR5 (which is a lowly US-market spec; it came with an 87bhp single-cam motor rather than the fabled 4A-GE) was originally bought as a parts car for Riko’s Corolla GTS, on the grounds that it was cheaper to buy a whole car than scratch around for the individual bits. It had been sitting out in a forest in the Santa Cruz Mountains for the better part of a decade, and frankly it was a mess; the steering wheel rubber had been totally eaten away by rats, the stock interior had been removed and then thrown back in like a dumpster. When Riko bought it, principally for its straight body, he parked it in his yard and essentially ignored it for four years, until this whole project kicked off in February 2019. Amazingly the only part that was rusty was the rear hatch, which shows what a canny purchase it was in the first place, but of course Riko wanted to do this properly. So there was more than a little remedial work to do.

“The shell was media-blasted, perfected, and treated to a full rotisserie paint job,” he explains. “I like old cars, but I don’t like the old wiring, or dealing with hunting for classic parts. I find it more reliable to redo everything – still keeping the soul of the car, but bringing it up to date. And yes, this did cost a lot to build, but any race car project at this level will run that bill and much higher; I wanted to show that there is a level of quality that can be seen in professional race cars and to do the same with this one – to show people that you can apply those same principles to these old Japanese street cars. And I hope it will inspire others to push for higher quality with their builds.” 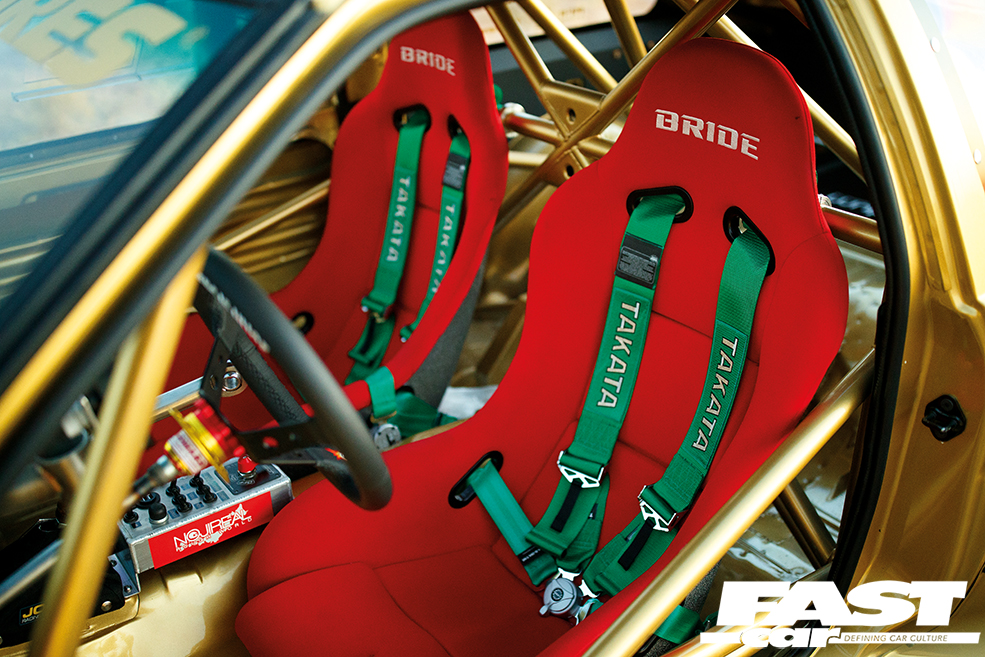 Riko was fully hands-on with this project, as with all of his previous ones; running his own always-on-call commercial water heater company leaves little spare time, but his role in the process is more managemental: “I have the idea and vision, I choose the parts, I pick the paint, I schedule, I budget, I manage emotions,” he says. “I am the contractor and I sub out the work. I’m extremely involved with the build process – it’s like having a child and raising them the way you want to; ignore them and you will have lots of trouble ahead!” So the build took place at the hands of Marcus Fry Racing in Redwood City, California, with the paintwork carried out by Juan Ayala at 24/7 Auto Body. Grant Hendricks at Battle Garage Racing Service was on hand to supply all the parts on Riko’s detailed wishlist, and with all of these experts working in harmony, the build came together impressively quickly. “The main hurdle was waiting for the Custom Garage Speed N3 bodykit to arrive from Japan, we had to wait three months,” says Riko. “It was hard to recover from that lost time, and the car ended up coming out of the bodyshop two weeks before SEMA! We took a freshly painted body, assembled it and had it running by 5am on the Sunday before the show… I’ve learned that every step matters, even if it’s in the beginning of the game with four quarters left to play! You have to manage every piece as if there’s no overtime.”

The level of customisation throughout the build really is astonishing. That slick shaved and wire-tucked bay houses a Gen-5 BEAMS engine, the ITBs packing massive trumpets as a siren song to every Toyota fan out there, and despite being unashamedly a full-on show car, it’s been built from first principles to fulfil that race-car brief Riko was so insistent upon. The suspension has been totally reworked, the rear end wearing a ‘true’ coilover setup (whereby the OEM spring-on-axle arrangement is wholly replaced by proper coilovers), and the entire Techno Toy Tuning catalogue has been pillaged to make everything possible under there fully adjustable and dialled in for pure function. Indeed, the only factory-stock part underneath is the front lower subframe, everything else has been upgraded for track-biased thrills. The wheels are a story in themselves, as Riko worked closely with JC Pepino at WORK Wheels to build up a set of Equip 40 Smoky Black Edition four-spokes – only twenty-five sets had ever been made, all of which were sold, but Riko was able to convince WORK to produce just one more set using the last drip of paint they had left, set number 26-of-25. 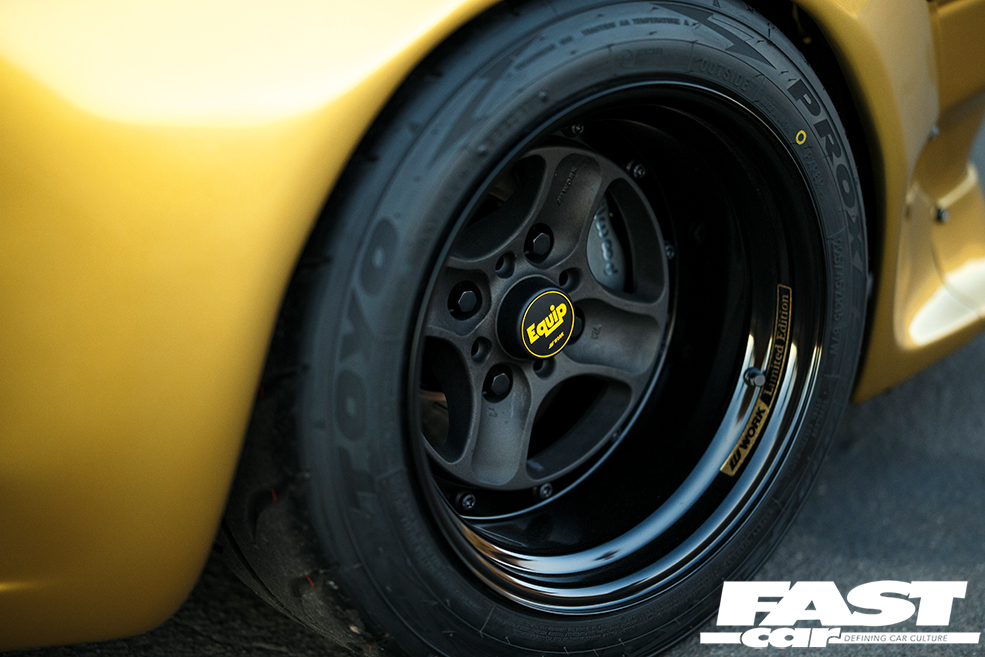 The brakes that sit behind them are proper because-race-car stuff too, the Brembo ‘Baby Daddy’ BBK at the front precision-engineered to fit behind smaller wheels, and the rear being Ford-fitment because, naturally, Riko’s decided to run a Ford 8.8 LSD rear axle. But of course. Peek through those lightweight polycarbonate windows and you’ll see that it’s all built for the track in there; it may be so clean you could genuinely eat your dinner off it without getting any nasty infections (but seriously, don’t – Riko puts a lot of effort into keeping it this clean), but there’s no denying how function is on a level pegging with form. The AiM Strada digi-dash, that incredible rollcage, the Bride Zeta 3 seats (mounted lower in custom floor cut-outs for optimal driver position), the low-down Radium fuel cell… the car’s first job was to win trophies and hearts, but make no mistake, this dude’s off to the track. That’s what this was really built for.

“It’s so personal for me,” Riko smiles. “I love watching my door roll up and seeing a race car in my stable! I keep building these racers, and one day I’ll have time to track them; the day job leaves me little time to get away on weekends, but it is a dream one day to take them all to the track and show the years of building had real purpose. It’s something you can’t just buy, these cars took years and I wasn’t sure if people would get the message or even know what I was doing, but thankfully I was wrong. People knew I was nuts to go this far with this little old car, but they seem to truly appreciate why I did it. It was awesome, I want to build again for 2020.” 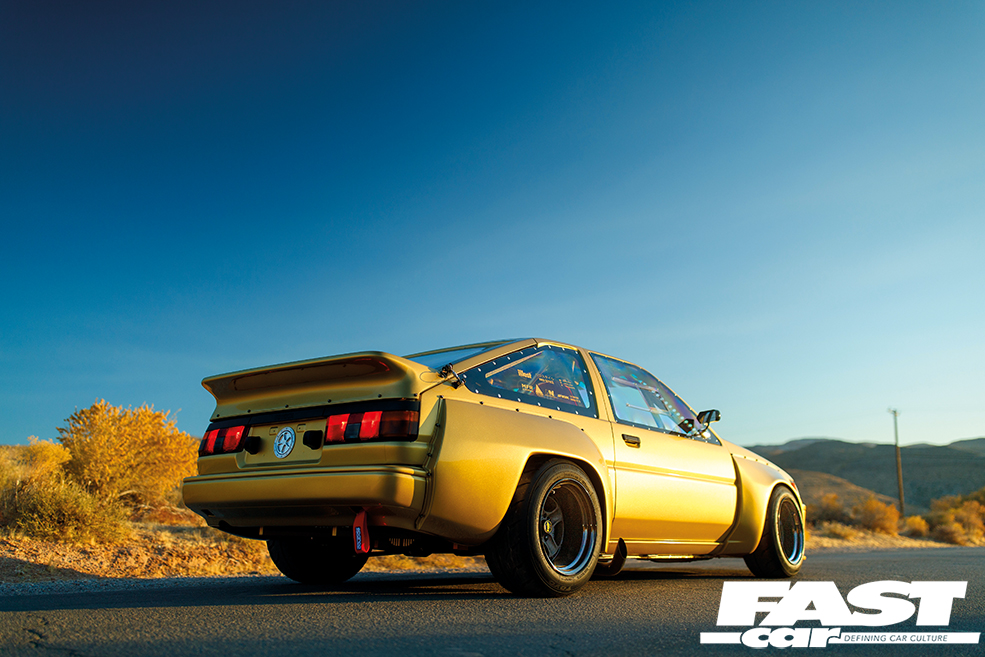 …and that’s exactly what Riko will do. The build for the next SEMA show is already well underway. Although we suspect that this time, despite the punishing build schedule, he’ll be finding some time to take this world-class Corolla out onto the track and use it for what it was built for. That gleaming golden hue has a lot to live up to.