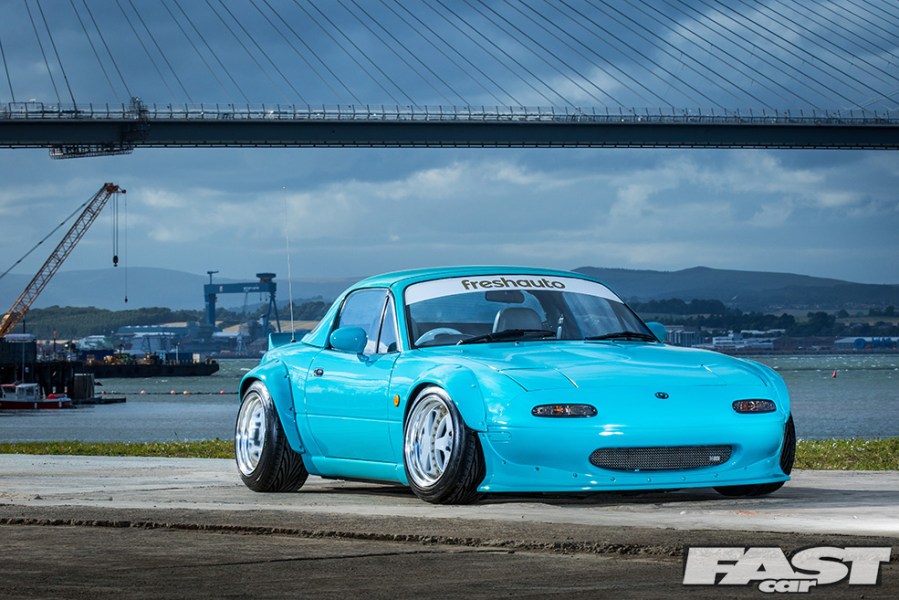 No matter how well you think you have things planned, when it comes to modifying, there’s always the chance of veering off in another direction.

Eilidh Dunsire thought she had it all worked out. Having a daily commute, she sensibly took her precious S2000 off the road and picked up a stock 1998 MX-5 Berkeley as a runaround. It just so happened the timing coincided with Eilidh’s first sighting of the awesome Rocket Bunny MX-5 kit and that was it.

Instead of a daily hack, the Mazda was destined to evolve into the full-on show car and daily all rolled into one, while the S2000 was sold on. An interruption, divine intervention, whatever you want to call it, there’s no doubting that it turned out to be a damn good decision.

Initially, while saving up for the kit, Eilidh had to make do with making the MX-5, “A bit less geeky. It had massive arch gap, a boot lid suitcase rail and terrible wood veneer,” she laughs. The temporary solution was cheap coilovers, wheels and a few other bits to take the edge off. Fitting this resulted in some light arch damage, which bothered Eilidh. The kit had to come soon!

Fortunately, just a few months later, Eilidh got a job much closer to home and with more pennies in the bank it was time for phase two. The genuine Rocket Bunny kit was sourced and imported and the wheels had already been targeted. “I liked Work CR01s long before I got the MX-5,” smiles Eilidh. “It meant it was just a case of researching and planning the fitment and tyre sizes. I didn’t want massive stretch. I had to get a balance of looking good but driving well and safe.”

Sensible girl. In preparation of the custom wheel order, HSD Monopro coilovers were fitted and the car was dropped off for the body prep. New wings were added along with the kit, LED headlights, smoked side-lights and a Eunos rear panel. Front bumper smoothing and de-chroming completed the mix before the turquoise was chosen.

The wheels finally arrived just two days before the 2016 Scottish Car Show (SCS). Eilidh made it there on temporary wheels and switched them for the show and it all went well; until the drive home. Being static, the underside was taking a beating, so air became the next thing on the hitlist.

As usual, there was no rash decision and instead a thorough search found the ideal option in AirREX struts. These were custom made for the MX-5 and arrived from the Netherlands to be mated with Air Lift V2 management and a two-gallon AirREX tank. From here on some tinkering of suspension bits and hefty work to the arches finally achieved the desired set-up.

Eilidh’s attention switched to the interior and here she gave it a personal touch. With the MX-5 having hints of a retro theme, she designed a ’90s style pattern for some of the trim material. It includes symbols relevant to the car, like the ‘M’ from Miata and the Rocket Bunny ‘King Pig’ logo and you’ll find it lavished on the doorcards and gaiters. Elsewhere the Driftwood steering wheel and air tank were painted white and given a colour splash to finish them off.

Other than a custom exhaust, there are no performance mods, but this is where Eilidh may venture next. Until then she’s happy to cruise around in her wide and wild modified Mazda MX-5, having the daily driver and stunning show car all in one!

THANKS
Injection Imports; J Fab Aberdeen; and of course Daniel for helping me fi t parts late at night, in the rain, over entire weekends and whenever needed.