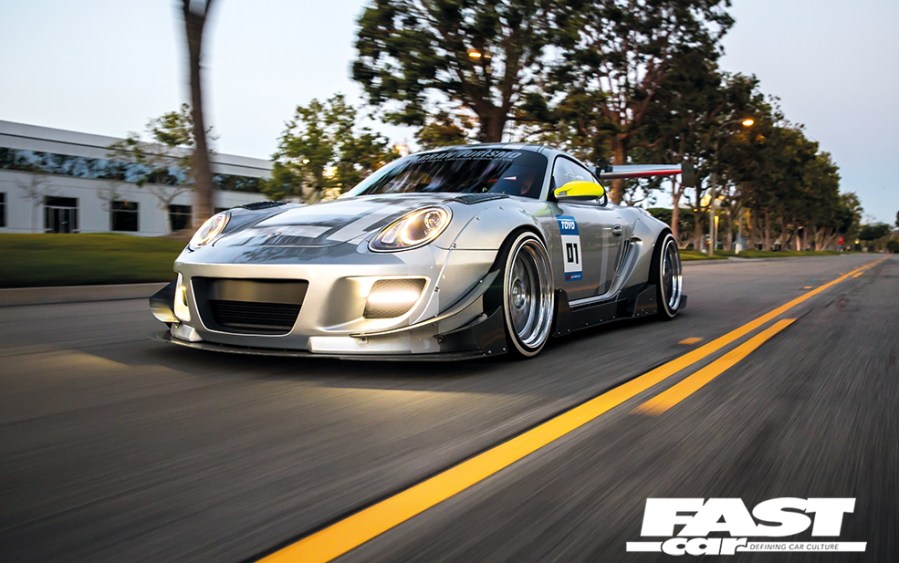 As one of the finalists for the Hot Wheels Legends Tour 2020, Dionne Mascunana’s modified Porsche Cayman complete with Pandem bokykit is on fire!

When it comes to being a petrolhead, few people find their inner car nut later in life. For most of us, the calling is heard way back in our early childhood. For some, it may have been inspired by a spanner-wielding relative who sparked their desire for all things petrol-powered – be it their dad’s tuned-up Ford Capri or an uncle’s constantly breaking, but undeniably cool, Lotus Esprit, those images of man and machine burn deep into our subconscious and remain there for life. But for others, it was another source of stimulation – the fantastical miniature creations hailing from the world of Hot Wheels. These most awesome of automobiles, represented in 1:64th scale, act like a hit of crack cocaine to the cerebrum of an impressionable young kid, the gleaming paint jobs and wild modifications lighting up their eager imaginations like nothing else. If you had one, you wanted two. Then three. Four. In the end you’d have a whole box of them that, come the weekend, would get scattered across the floor and arranged into a mini car meet and drag race. You’d fantasise about what it would be like to drive a car like that in real life – to own such an incredible machine. Well, for most of us, that dream remains just that, but for a select few, it becomes a mind-blowing reality!

“I’ve always loved Hot Wheels cars as a kid,” beams 35-year-old Californian petrolhead Dionne Muscunana. “Growing up I had a massive collection: the trucks, the wagons, the hot rods, the rat rods, the goofy cars that you see on TV – I played with them all.” 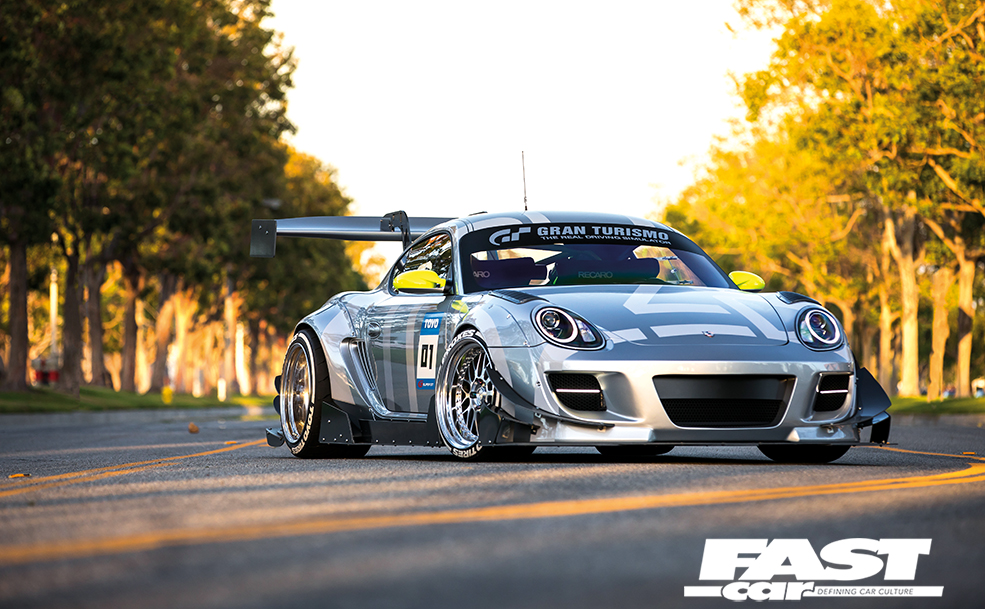 So when he heard that entries were open for the 2020 Hot Wheels Legends Tour, Dionne was only too eager to apply. The Hot Wheels Legends Tour is an annual competition to find a very special fan-made custom vehicle to make into a 1:64th scale toy. With rounds in Europe, Latin America, Asia and North America, it’s a global contest that attracts some of the world’s wildest machines, all vying for the chance to be die cast into Hot Wheels history. Each destination has its own competitions with the winner from each area moving on to battle it out in the finale – an event that is streamed live from the garage of car crazy celebrity judge Jay Leno. Helping Jay select the best of the best is a panel of additional judges that for the 2020 comp included various Hot Wheels designers, super fans plus ex-Top Gear Stig, Ben Collins and even blunt-toking rap mogul Snoop Dogg!

“I’d just finished the third evolution of my modified Porsche Cayman and thought I would enter it into the competition,” explains Dionne. “It’s certainly the wildest Porsche Cayman I’ve ever seen, so I felt it had a shot of doing well, and the chance to have it immortalised as a Hot Wheels car was just too good to miss.” To enter the competition, contestants were required to submit a four-minute video of their car which would be whittled down to the top 13 that would go on to feature in the finale. 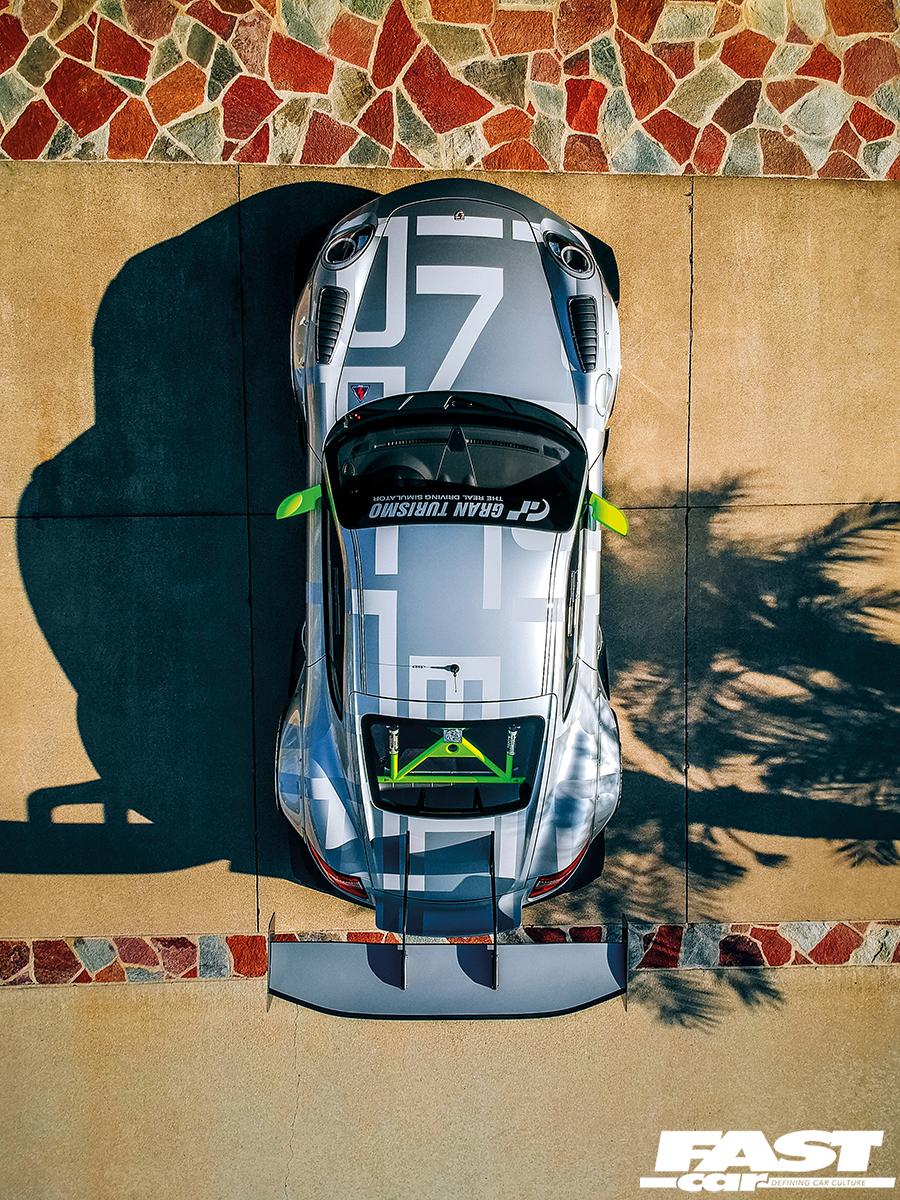 “When I entered my video, it was just a bit of fun really, but I ended up winning my region and being entered in the finale!” Dionne beams. “I guess the crazy way I like to modify my cars caught the eyes of the judges, which goes to how that all those years playing with my toy cars as a kid, and trying to bring that sense of wow factor and fun to my real life builds, really paid off!”

It certainly did, as you can see for yourself by looking at the pics. But Dionne can’t give the credit for his amazing Cayman solely to his love of miniature motors, as he’s also lucky enough to get a tonne of inspiration and advice on building eye-poppingly cool cars from doing his day job, as the head content creator for Toyo Tires USA. “I really love my job, as it involves travelling around the US and places like Japan to find the world’s best cars to film and photograph for the company’s social media channels,” he explains. “Seeing all these cars, built by some of the best in the business, means you not only pick up a few tricks of the trade along the way, but you  get to make some great friends too.” 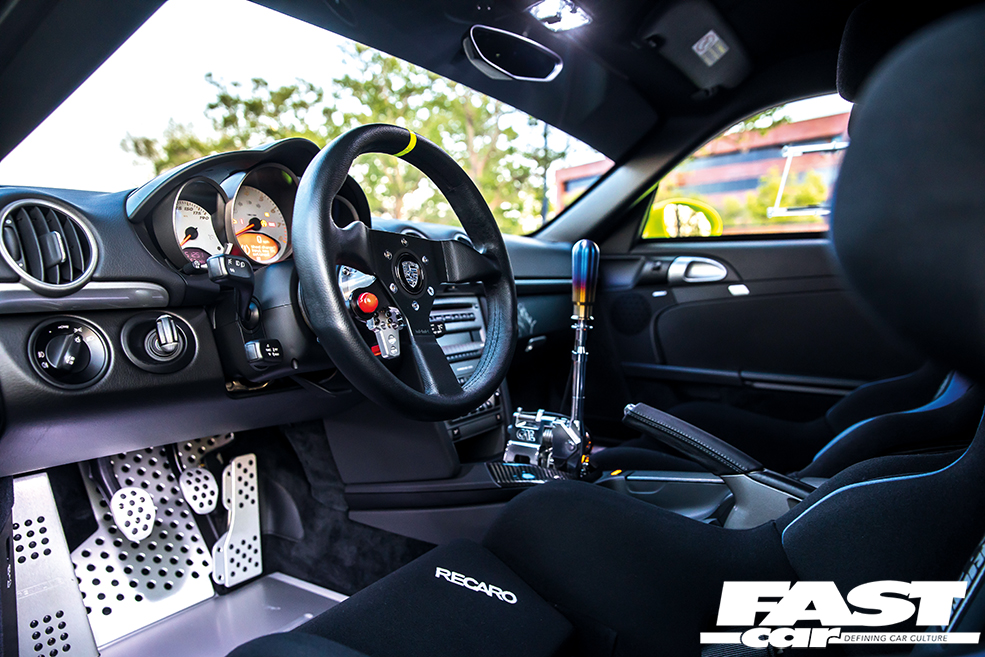 One of Dionne’s friends that has been instrumental in creating the Cayman’s audaciously-wide look is Kei Muira from Rocket Bunny.

“I’m really a JDM fanboy at heart,” he laughs. “And have long been a fan of the work of Muira-san and the various Japanese cars he’s worked on, so I was ecstatic to be able to collaborate with him to develop this Pandem wide arch kit, which was the first in the world on a Porsche Cayman,” says Dionne. ‘It was debuted on the car at the Toyo booth at the 2016 SEMA show in Las Vegas.” 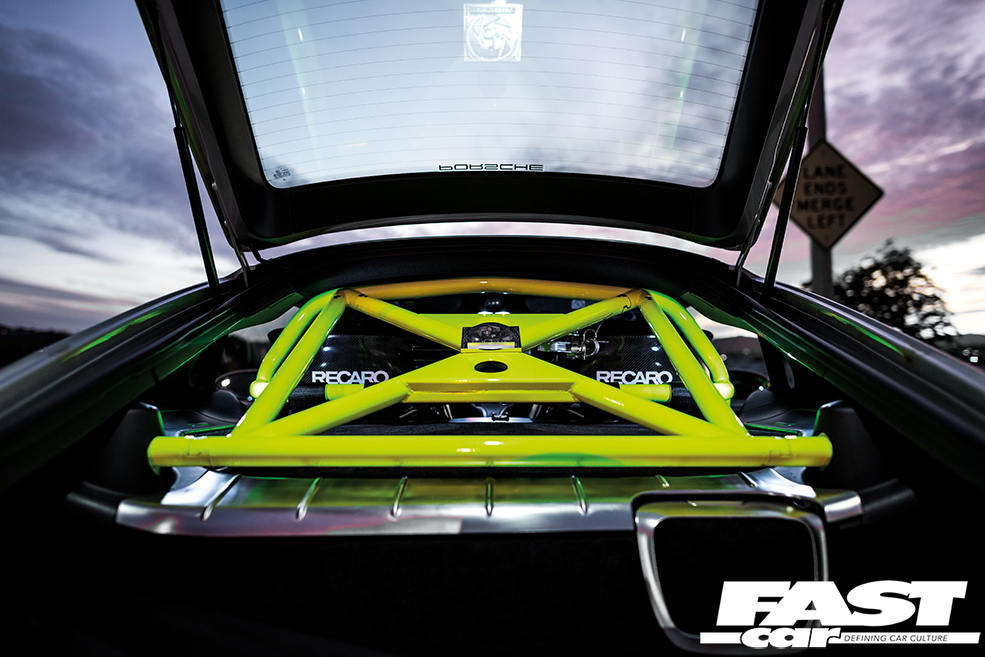 But being the perfectionist he is, Dionne wasn’t satisfied with simply rocking the kit straight out of the box, and soon made some of his own unique modifications.

“Shortly after I showed the kit at SEMA, a load of other Cayman’s started popping up with the same kit, so I decided to change mine up a bit to make it stand out,” he says. “For me it was the front bumper that was the weakest link, so I took inspiration from several eras of Porsche racecars to see what I could do.” 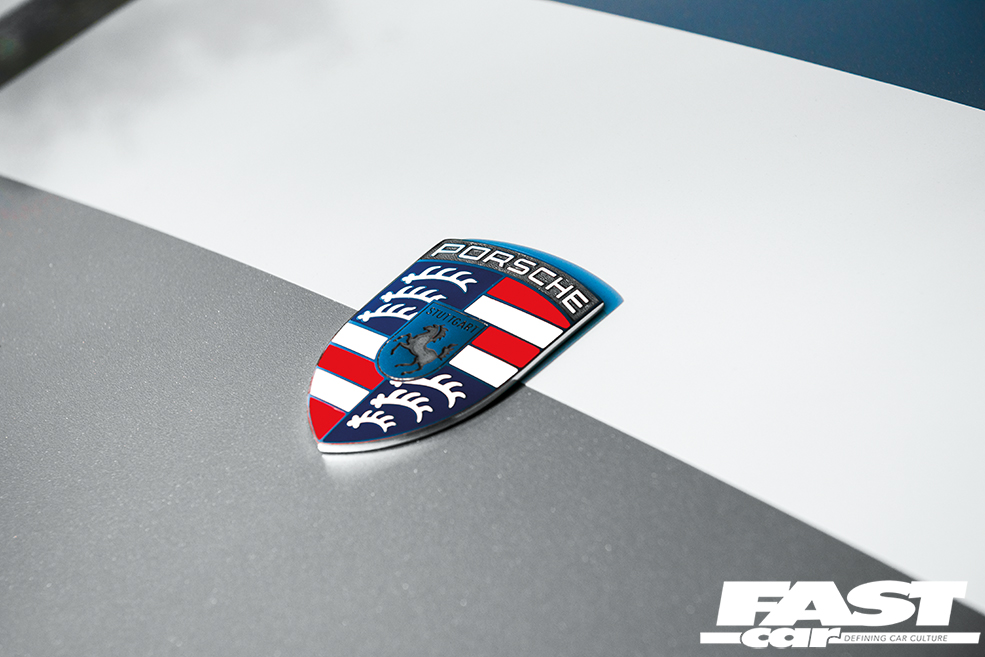 In the end, and possibly due to his JDM roots, Dionne noticed that the front bumper of a MazdaSpeed RX-8 bore a striking resemblance to the face of Porsche racecars of yesteryear, so he bit the bullet and grafted the RX-8’s grin onto the Porker’s Pandem front bumper. Along with a re-styled rear bumper and some Spyder Auto head and taillights, it has totally modernised the car.

But the wide kit is only the base for the build, as Dionne always had in mind that this car was going to be way more than just a pretty face.

“I took inspiration from Super GT and DTM racecars for the aggressive aero setup,” he says. “But very few parts are available off the shelf for the Cayman, so most of it I had to custom make myself.” 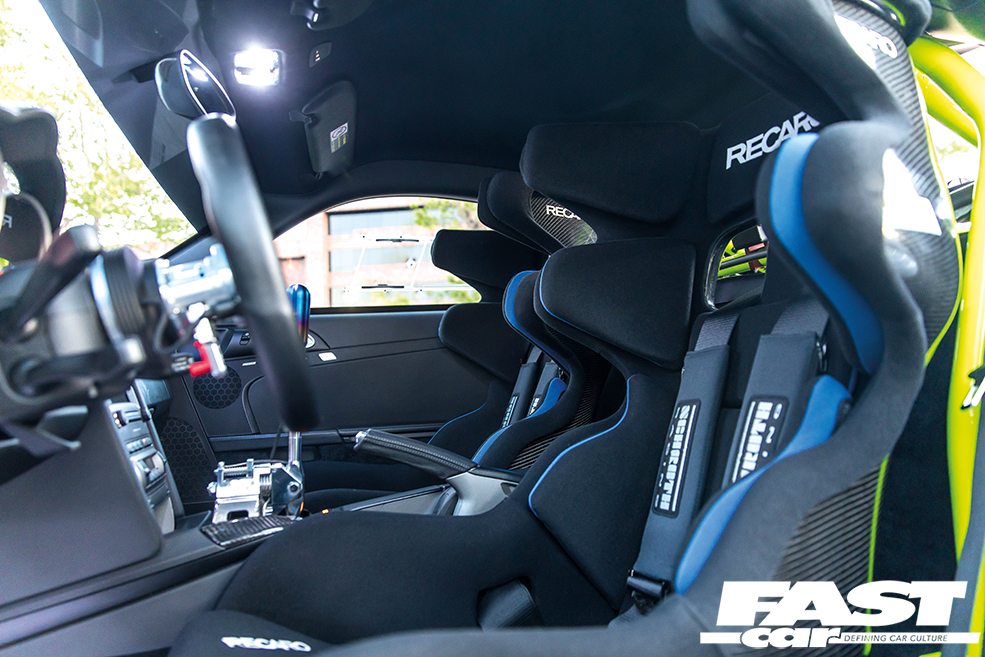 Items like the front splitter, canards, side skirts and rear diffuser were all hand made in Dionne’s garage and the radical ‘swan-neck’ rear wing came straight from his brain, to cardboard mock-ups, to the CNC machine.

With the bodywork looking like a genuine Super GT racer for the road, getting the right wheels was a crucial aspect to carry the look off to perfection, and Dionne’s choice of a set of 19in Work Meister M1s, 11in wide at the front and 14in wide at the rear, complement the Japanese inspired exterior perfectly. 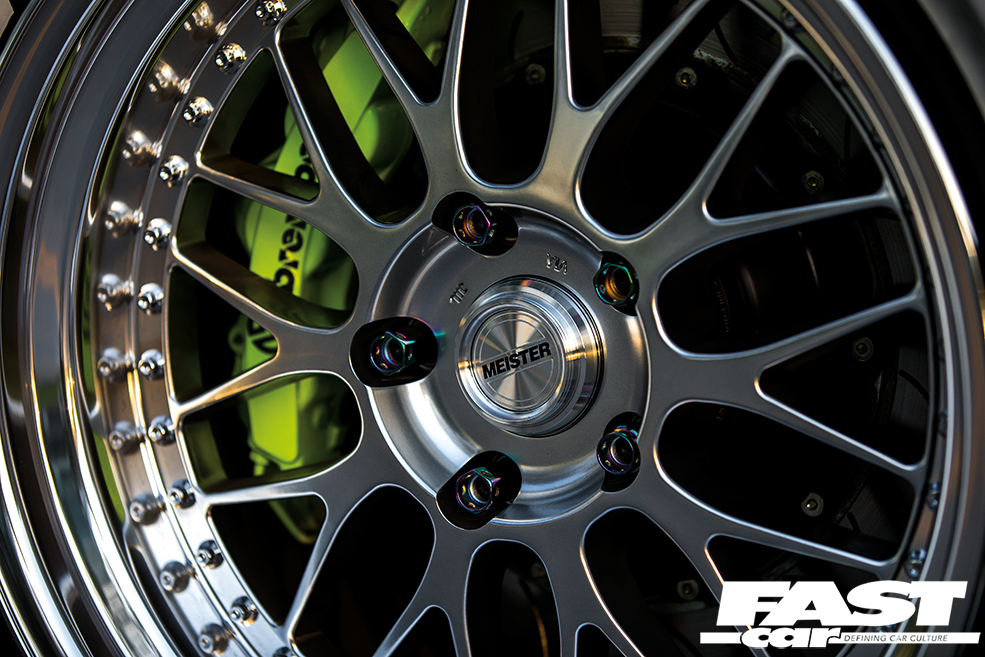 Wrapped in Toyo’s track-focussed R888R tyres (naturally), they provide a suitable footprint to keep the modified Porsche Cayman planted and translate all of the aero’s additional downforce into other-worldly levels of grip and traction.

But tyres will only do so much if you can’t keep them in contact with the tarmac, so Dionne has ensured he has sourced the best in the business when it comes to the Cayman’s suspension.

“Under the swollen arches is a full GT3-spec setup with Moton three-way coilovers and a complete set of Tarett billet suspension arms and blade anti-roll bars, just like on the real racecars,” says Dionne proudly. “Combined with the Rennline rear brace and bump-steer kit, it’s an incredible setup which is practically race-ready.” 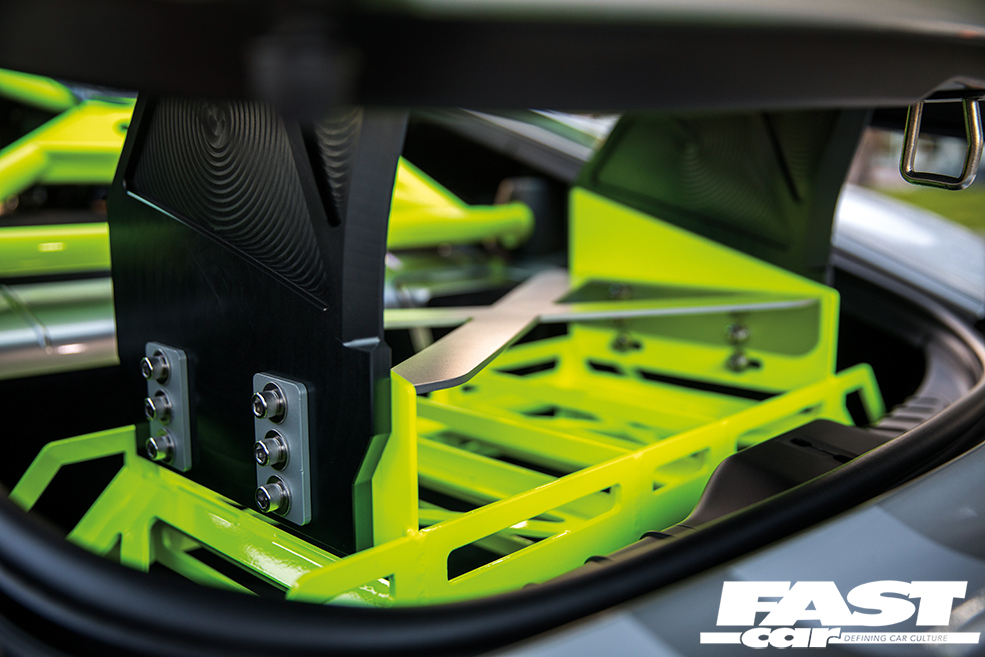 Open up the driver’s door and you are greeted with yet more track-approved goodies, most notably the Acid Green GMG rollcage and the Recaro P1300 GT carbon seats. “The seats are also genuine GT3 items and cost a cool $24,000 for the pair!” reveals Dionne. “They were easily the single most expensive items on the car, but for me a build is all in the details, so they’re well worth it.”

Complementing the seats is a set of Schroth Profi III six-point harnesses, a Momo steering wheel, Plastics4Performance Perspex windows and a burnt titanium gearknob mounted high on a trick CAE short shifter. This slick cog-swapper not only looks the dog’s danglies, but allows much faster, more precise changes of ratio to keep the naturally aspirated flat-six singing.

“I’ve purposely decided against forced induction or opening up the block to strengthen the internals,” Dionne says. “That’s because I’m following the spirit of the regulations of  GT3 racing, which outlaws such modifications to keep the racing as close as possible and limit costs.” 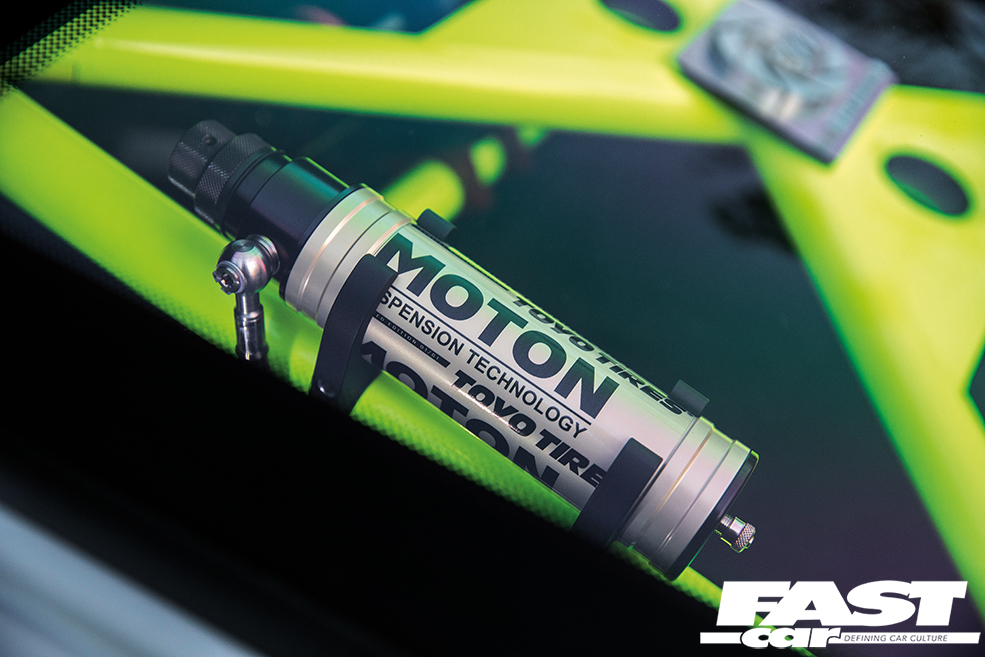 But that doesn’t mean he’s simply left the motor stock, as it features a host of naturally aspirated tuning options to improve response and boost bhp.

The mid-mounted motor benefits from a Fabspeed cold air intake which feeds a Porsche GT3 throttle body and IPD intake plenum. Then, after the suck, squeeze, bang, blow process has occurred, the waste gases are expelled via a set of Fabspeed long-tube race headers and out to the atmosphere through a Fabspeed centre-exit race exhaust. This combination of breathing mods and GSR Technik ECU flash means the 3.4-litre motor is now pushing out a meaty 305bhp at the wheels.

“The Cayman has been a real labour of love for me as I have built most of it myself and that blood, sweat and tears really shows in the level of fit and finish of the car as a whole,” Dionne says. “And that’s something the Hot Wheels judges picked up on too. It may not have been the wildest or wackiest creation in the competition, but it was definitely one of the cleanest.” 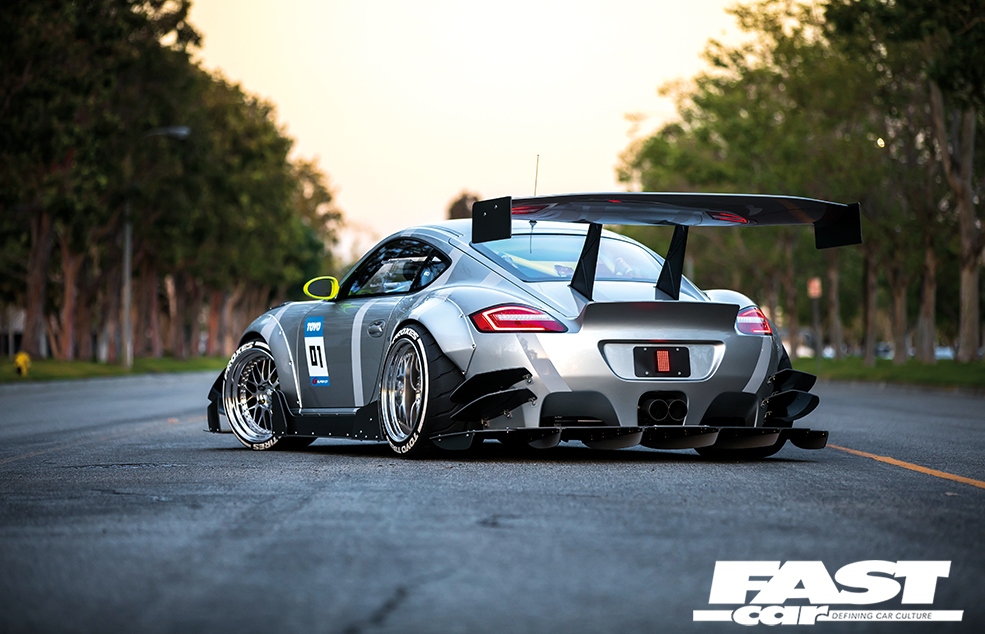 Ultimately, the modified Porsche Cayman lost out in the finale to a custom body-dropped 1970 Pontiac Trans Am, and with it faded Dionne’s dream of his car becoming part of Hot Wheels legend. But far from being despondent, he’s just as happy to keep doing what he does and enjoying the process along the way.

“As a modifier, not everyone is going to love what you do as much as you do, and that’s fine. I build all my cars the way I want to, not to gain approval from anyone else,” states Dionne proudly. “Besides this is just one of the builds I currently own, as I’ve also got a wild Mazda Miata and an insane Audi project in the pipeline too, so maybe the Hot Wheels dream still some has life left in in yet?” We couldn’t agree more!

Porsche tuning products such as those featured on Dionne’s Cayman can be obtained from leading Porsche specialist and parts supplier Design911.com.