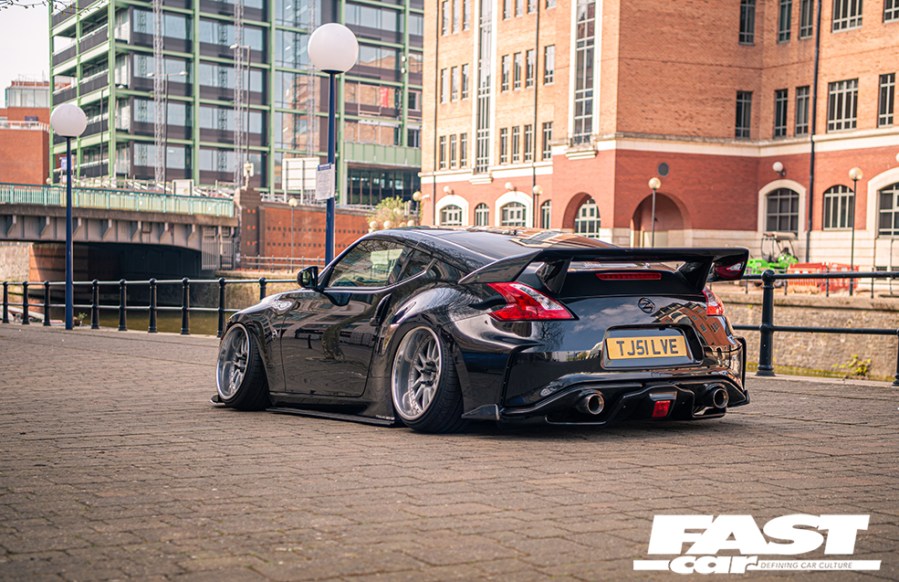 After building himself a track toy out of a Fiesta ST and living through the fun of trying to daily a stripped out car with no carpets or heater, Tom Silverthorn decided his next car would be quick and comfortable. This is his modified Nissan 370Z.

When searching for a new car I’m pretty sure most of us have completed a cheeky insurance quote on one of the popular comparison websites for a car we didn’t think we could afford to own or at least insure. Most of us, disappointingly, were proved right, with our dreams being whipped away from us within in a couple of clicks of a computer mouse as we discovered our fears were true and that insuring the car is probably just as expensive as buying it in the first place. Tom, the owner of this lovely 370Z, however, was pleasantly surprised when he received a quote of £1000 on a 370Z at just 20-years-old with three-years no claims bonus. While certainly not what you could consider cheap, it was well within the realms of affordability, especially considering his age, experience and the brutal nature of Nissan’s sleek 3.7-litre bruiser.

“I was shocked when the quote came through,” Tom beams. “I never thought it would be in my budget to own a car like that at this age, but this then opened up a whole new world of possibilities that I didn’t even think existed.” 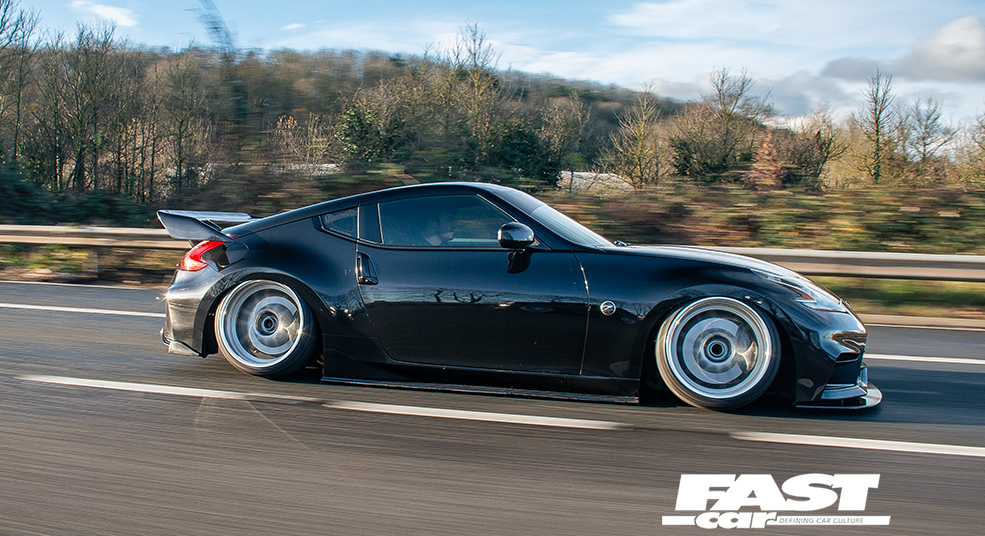 Add in the fact that Tom couldn’t face another year of making it through a grueling British winter in his current daily, which at the time was a stripped out track tuned Fiesta with no heater, no carpets and no practicality, and it only helped escalate the process of finding a new replacement ride.

“I wanted something that could tackle the track and take me to work and back in comfort,” he says. “A 370Z is quite some leap from a Ford Fiesta, but now knowing it was in my price range, it didn’t take long before the hunt to buy one was most definitely on.”

Tom purchased the 2011 370Z GT with sport pack model completely stock with a full Nissan Service history. Apart from a small blemish on the front bumper it was seemingly very well looked after by the previous owner, which meant it was a great base for Tom to work from.

After the first drive home in his new pride and joy things were looking good, it was quicker out of the box than Tom had expected and the interior felt a particularly nice place to be, however, he had already started making plans in his head to add his own touches as it just felt a bit bland in standard form. 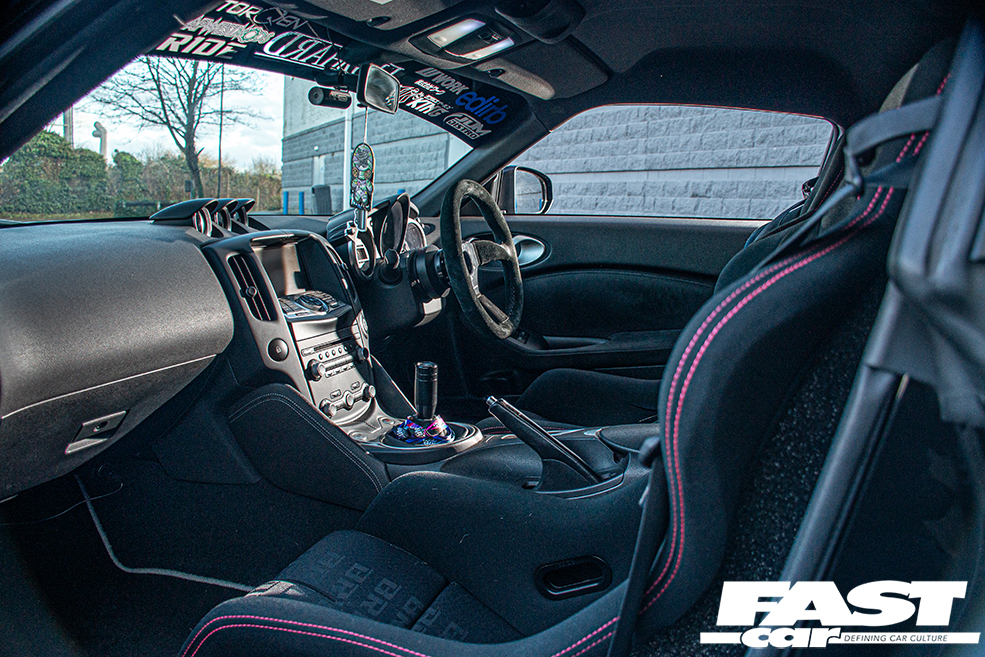 From the factory they’re not hugely eye catching on the outside either and Tom felt the standard suspension setup was overly soft too, especially compared to the track toy he had just stepped out of, so it needed something to make it more exciting. So, after making a promise to himself that the car would remain stock (we’ve all told ourselves that ridiculous lie) the modifications started less than a week later, when he purchased some Rays Gram Light wheels and BC Racing coilovers…

“I’m unsure how much lower this car is than a stock Nissan 370Z, but my subframe and differential are about 10mm from the floor, so I’d say it has to be at least four or five inches lower than stock. I’ve parked it next to 370Z on air ride before and my car was actually lower than that, even when it was fully aired out!” Tom remembers. 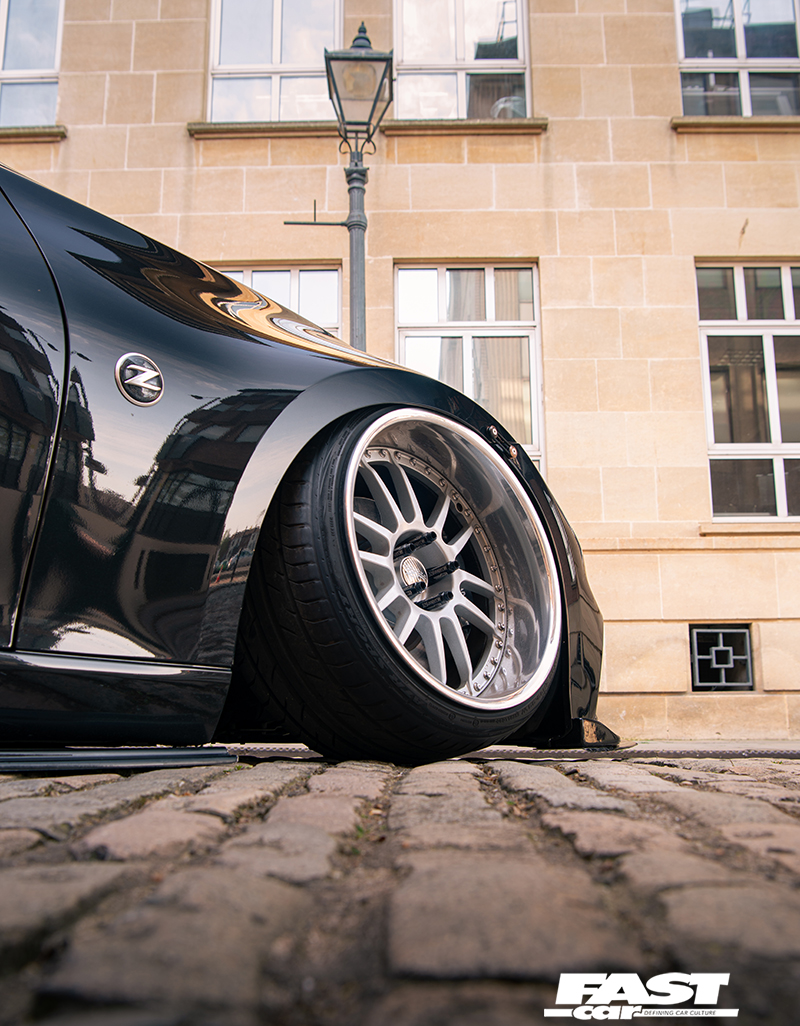 So its low, very low in fact. Whilst the car is technically static on coilovers, Tom has had to recently fit his car with air cups to allow him to park the car on his own drive. It was actually getting to the point where Tom couldn’t even jack the car up as it was just too low, the car even bottoms out on cat’s eyes! With the car needing to be jacked up most weekends so Tom can tinker/undertake some work on the car, change tyres or give the wheels a proper clean, it made good sense to add the air cups and achieve a small amount of usability.

“From a practicality point of view this is probably the best thing I’ve done to the car,” reckons Tom. “I still get the ridiculously low ride height and all the benefits of coilovers, while also being able to work on the car without too much stress of getting a jack under it. The kit allows me to raise the car 50mm at the touch of a button, much like some high-end super cars can lift their noses for speed bumps. However, I can’t drive the car with it lifted as the cups are not like full air ride and are pretty fragile. I only lift the car to either jack it up or park it on my drive. But as good as they are, they’re certainly not the answer to every situation, as even with the cups I can’t go over speed bumps, because the aero sits too low and would still catch unless the bump is very small.” 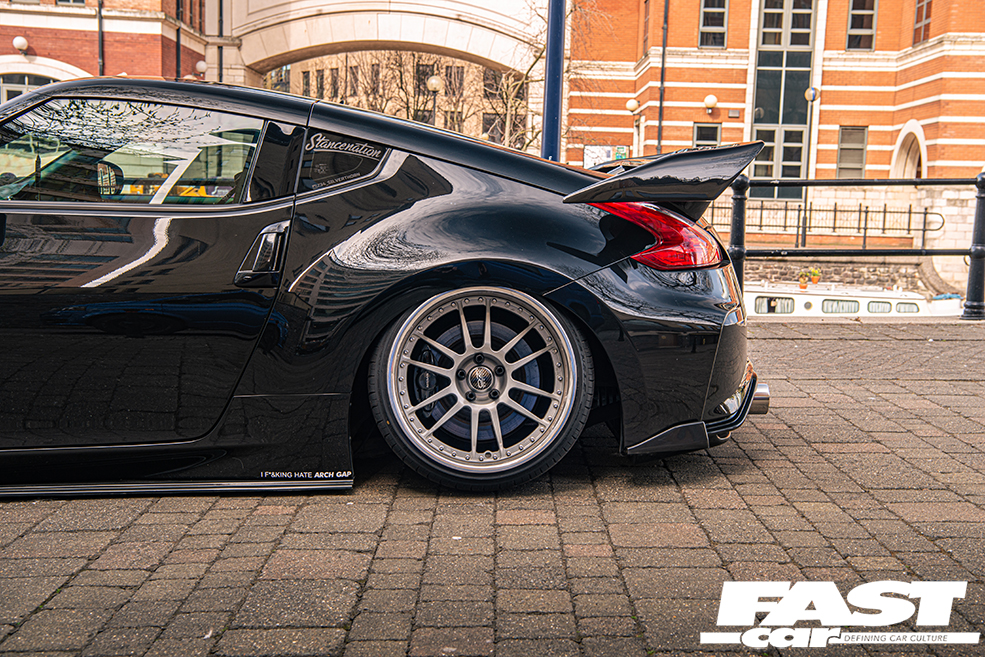 You will note that Tom’s running some pretty aggressive camber and this is achieved by adding custom top mounts at the front to relocate the suspension mounting point further inboard to give greater clearance between the knuckle and coilover. We were actually amazed when we met Tom and he drove towards us, the fitment of these wheels is insane! Whilst we’re on the subject of wheels, these custom deep-dish OZ Superleggera IIIs with satin silver faces, 4.5in polished lips, satin black barrels and polished hardware were given a new lease of life by custom wheel gurus Rimscarnated and, as you can expect, they have come out really well. Their finished specs are 11.5x19in ET-12 all round with 265/30/19 tyres.

Combining these wide, deep wheels with the Hardrace front upper control arms, that have been shortened by 30mm and sprayed candy pink, the car has a super aggressive stance. Shortening the arms has allowed for even more camber adjustment and when combined with the 40mm shorter T Demand knuckles it has allowed for up to 14 degrees of camber on the front. Currently the camber is set to a matching 12 degrees front and rear. Which even when not at its maximum, is still frankly ridiculous! 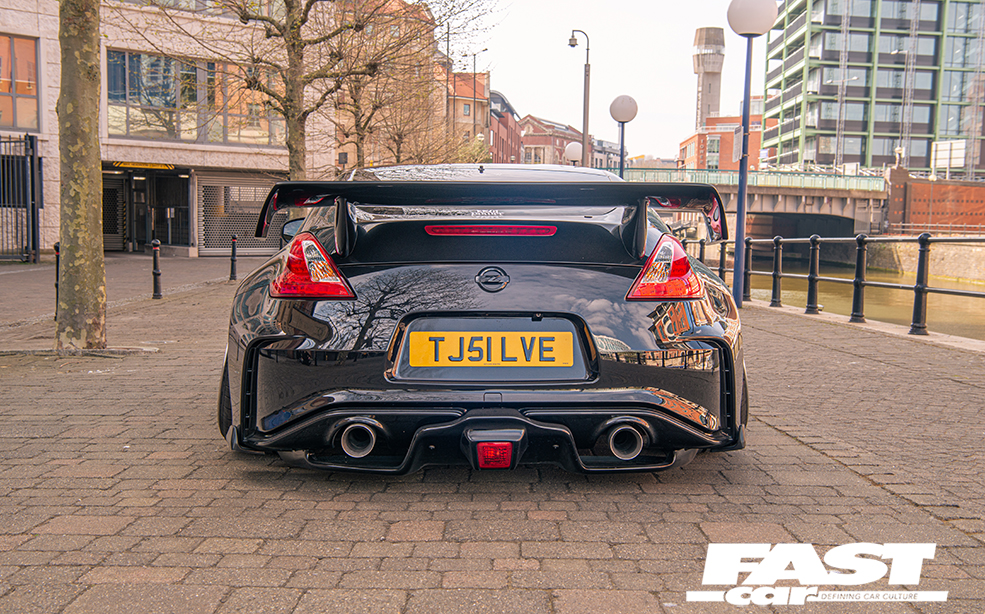 To assist with handling, Tom went for a GKTech angle kit. “I originally purchased this kit as I wanted to speed the steering up as there was a lot of steering input for very little movement on the stock set up. I didn’t for one minute think that I’d be able to use all 60 degrees of steering angle with the huge wheels up front. But somehow everything clears and I can go from lock-to-lock without any rubbing anywhere whatsoever! Result!” laughs Tom.

Next up was the body styling and Tom’s plan was to keep it smooth and classy, but also add some extra aggression to match the wild stance. Do achieve this he went with Nismo front and rear bumpers with an additional front lip and side extensions by Inspired Race Developments cut and shaped them to fit the bumpers. This was all then painted by a local bodyshop and fitted to the car. The door handles were then wrapped gloss black and a light tint added to the windows for that murderous look. Combined with a rear wing from 326Power, it really does look the part.

With the majority of the body work sorted Tom went after a stainless steel exhaust to not only unleash some noise, but also so it could be adapted to fit within the cut outs in his new Nismo rear bumper. He settled on an HKS Super-Sound exhaust and a custom ‘short tail’ rear section by infinity exhausts. Combined with a pair of uprated HKS drop-in panel filters, the car now sounds like it has the go to match the show. 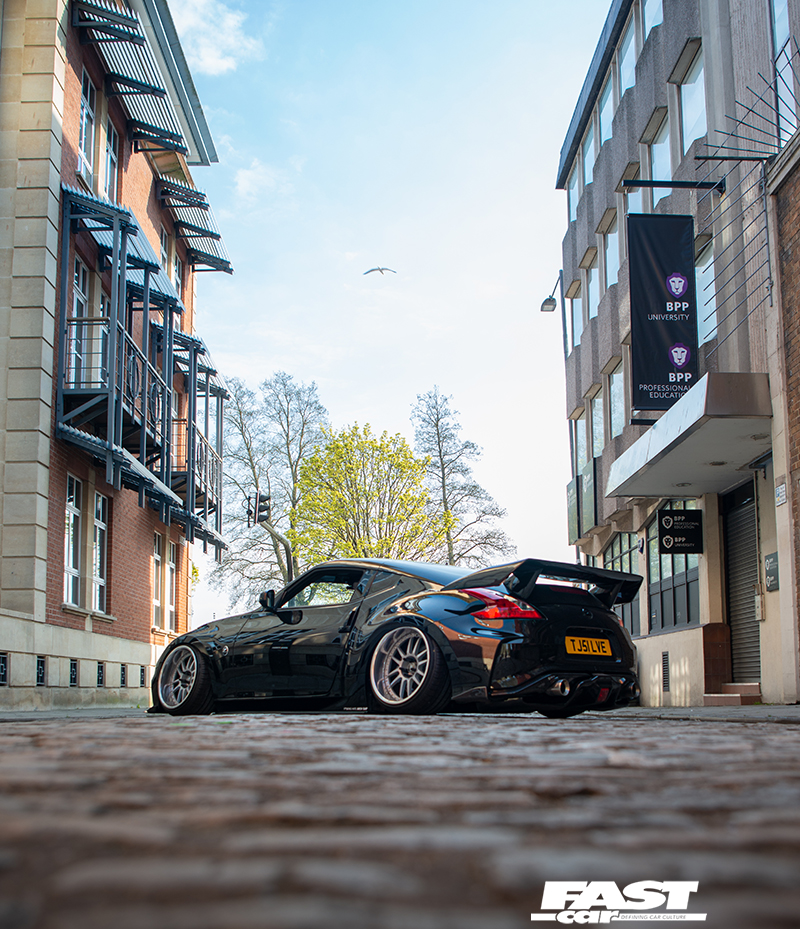 Inside the car Tom has fitted a pair of Bride x Vertex ‘Funky Queen’ Zeta 3 seats (which are two of only 100 made worldwide), a Motamec steering wheel and an ISR gear knob. He has also cleverly 3D-printed his own small panel that blends into the centre console and houses his switches for the air cups and looks like it was there from factory. Neat!

Tom has certainly focused more on aesthetics than power increases at this stage of the build, and for a lad of his age this is probably wise. There’s plenty of time to go fast and you can be sure that the insurance companies would certainly enjoy quoting him unhappy if had he upped the power massively. We like the fact that he’s used the old “less is more” technique and not gone overboard with his build, instead choosing to build something of quality with well thought out modifications. It’s also impressive that, except for the paintwork and the custom wing, he has undertaken pretty much all of the modifications himself.

The car turns heads wherever it goes and we can personally vouch for this, as we were inundated with passers by stopping to ask about it when we were doing the shoot for this feature. 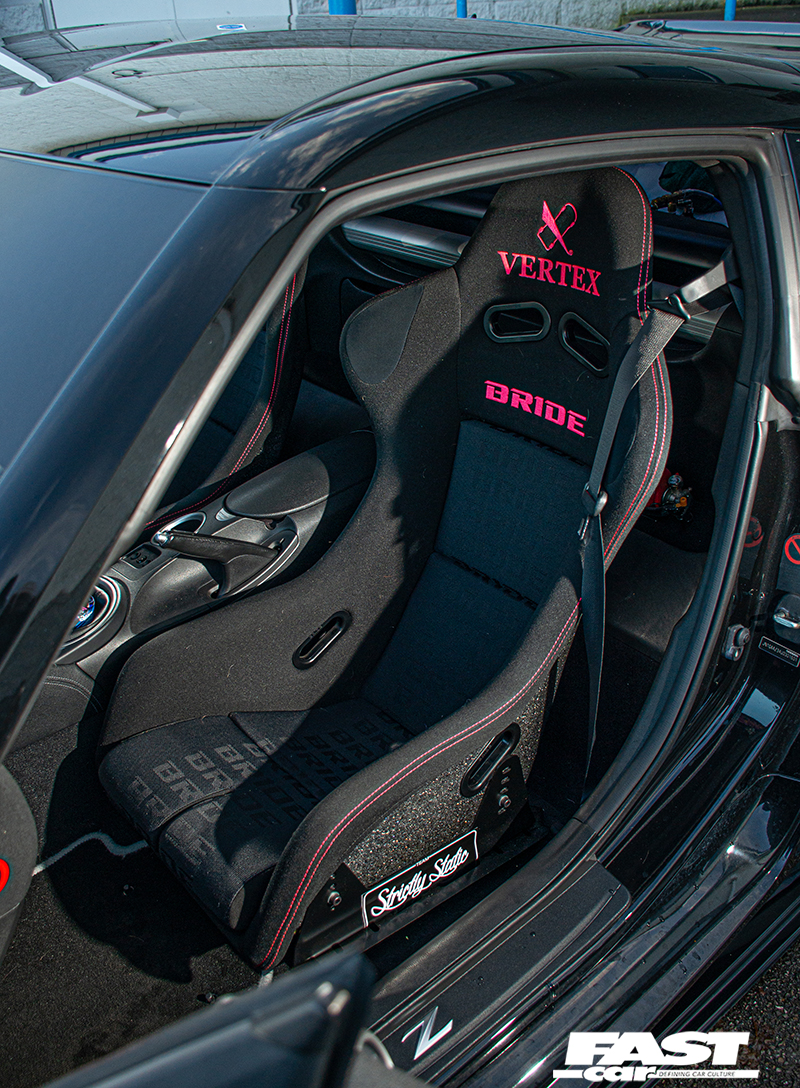 Tom is by no means finished with his modified Nissan 370Z and he has a number of further plans in the pipeline. A Kaaz 1.5 way LSD is on the cards, as the viscous LSD fitted currently has a tendency to open up when you least expect it making the car somewhat unpredictable in oversteer, he also plans to polybush the rear subframe and differential and maybe re-paint the front end and de-badge the front bumper.

The car could also see a decat fitted in the not so distant future, while a remap may also be on the cards, but more to remove the feature that stops you pressing the brake and accelerator at the same time, which restricts Tom from left-foot braking should he choose to do so. But whatever direction Tom takes his build from here, he seems to most definitely be on the right track and if it keeps going the way he has started, we’re sure his Fair Lady will keep getting the attention it so rightfully deserves. 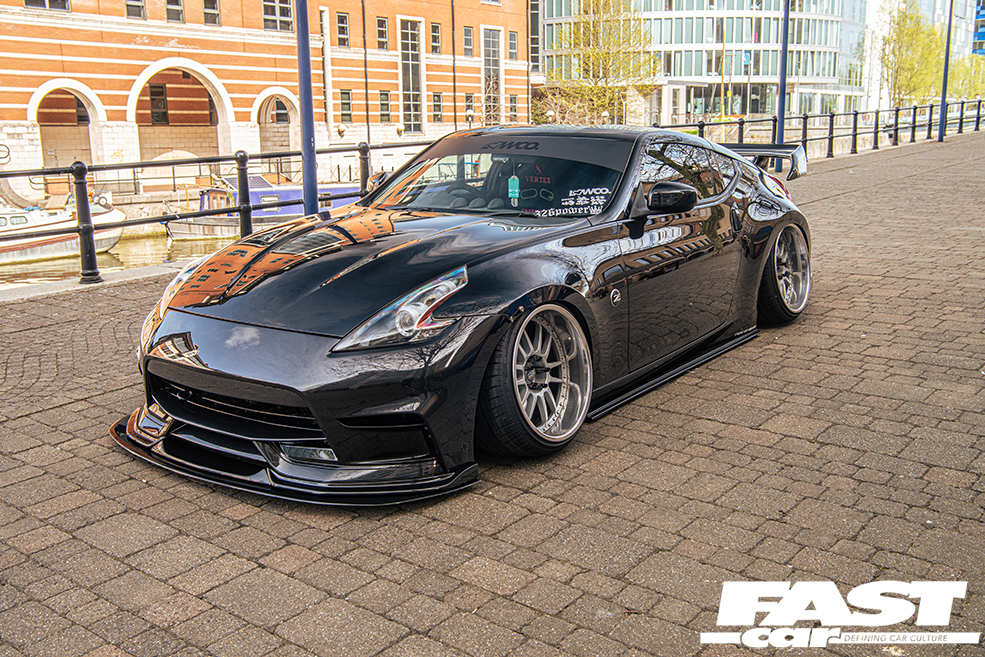