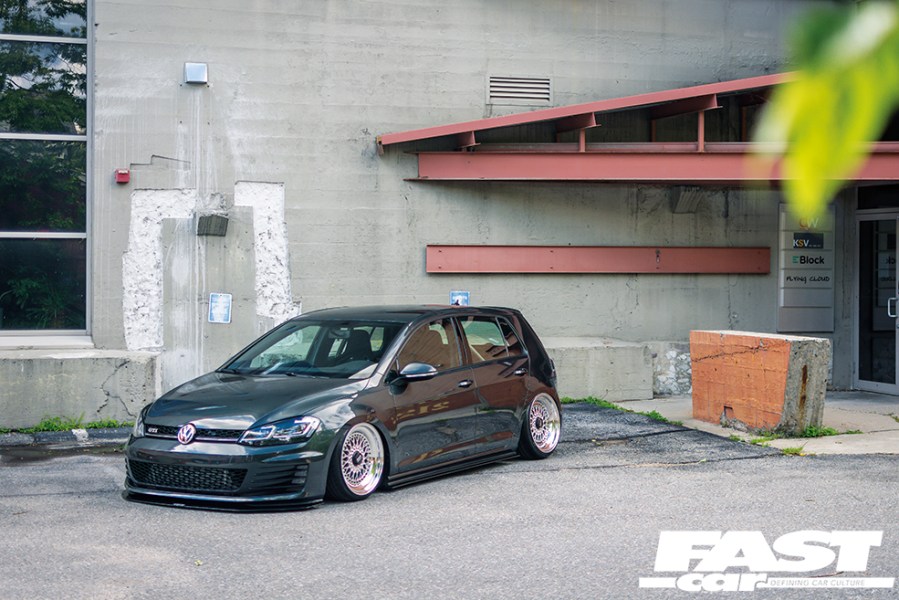 The Mk7 Golf GTI, in three-door, manual form was a very important car when it launched and even more so since the Mk8 variant arrived. We’ll let Geoff Landstrom explain exactly why with his modified example on air.

While it’s not as monumental as say, remembering where you were when (What’s The Story) Morning Glory was released, the introduction of the seventh generation Golf was still something to write home about. There were far more deliberate lines and design cues than the Mk6’s more rounded shape, and the red stripe sending itself through the premium headlights was something that wowed and wooed more than it should have. Overall, it was a smashing success, winning World Car of the Year in 2013. Subsequently, the Golf GTI took home more accolades than could fit in its boot over its time in production. 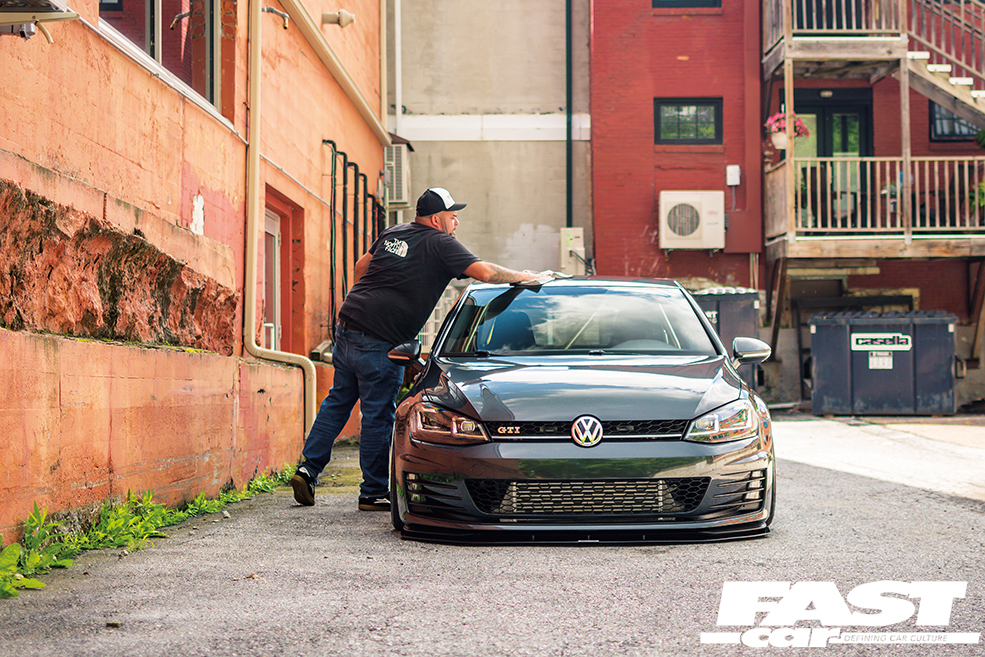 It was December of 2017 and the mid-model refresh, dubbed the Mk7.5, was just starting to hit dealers’ lots in the US. The ‘point five’ (no one calls it that, honest) brought a host of new options to the GTI, making it more desirable to most sales folks looking to move units. I think it was the first-for-a-GTI-in-the-US LED taillights, but I’m sure there was more to it. Anyway, at that time, Geoff Landstrom was looking to replace his slammin’ B5.5 Passat V6 with something newer. “I had test driven a few Mk7 GTI’ and fell in love with the overall driving experience,” says the 41-year-old Spencer, Massachusetts resident. “Not to be a total nerd, but driving the manual trans Mk7 brought me back to a similar driving experience that I had become addicted to in the Mk1 and Mk2 GTIs in my earlier years.”

Geoff, as it turns out, was born into a VW family. His mother had owned no less than 10 aircooled Beetles during her younger years and his father found himself in an array of GTIs during his driving tenure. But it was most likely his brother Terry’s MK1 that really set the hook. “I’d say the Dub thing really bit me in 1996 when my older brother got his first MK1 GTI. It was something beautiful.” With a supportive automotive family, it was almost kismet that Geoff would find himself with VW keys when the time came to earn a driver’s license. “My first car was actually a 1987 Pontiac LeMans hatchback with a 4-speed manual.” Err, scratch that previous statement. “In my eyes at the time it was as close to a VW Golf as I could get and all I could afford.” The Mr. Magoo stand-in rang in at a cost of free-99 for Geoff, thanks to his father, and enabled him to bank some bucks for an actual Volkswagen.

Later on, an ’88 Scirocco 8V bought from Terry at a heavily discounted price paved the way towards the Wolfsburg Kingdom, eventually being outfitted with Eibachs, custom green paint, and BBS RAs. Being a delivery driver for a local Dupont dealer landed the car in their annual calendar. “Which was crazy and not worthy,” Geoff admits. “I was officially hooked and have done nothing but embrace it since.” 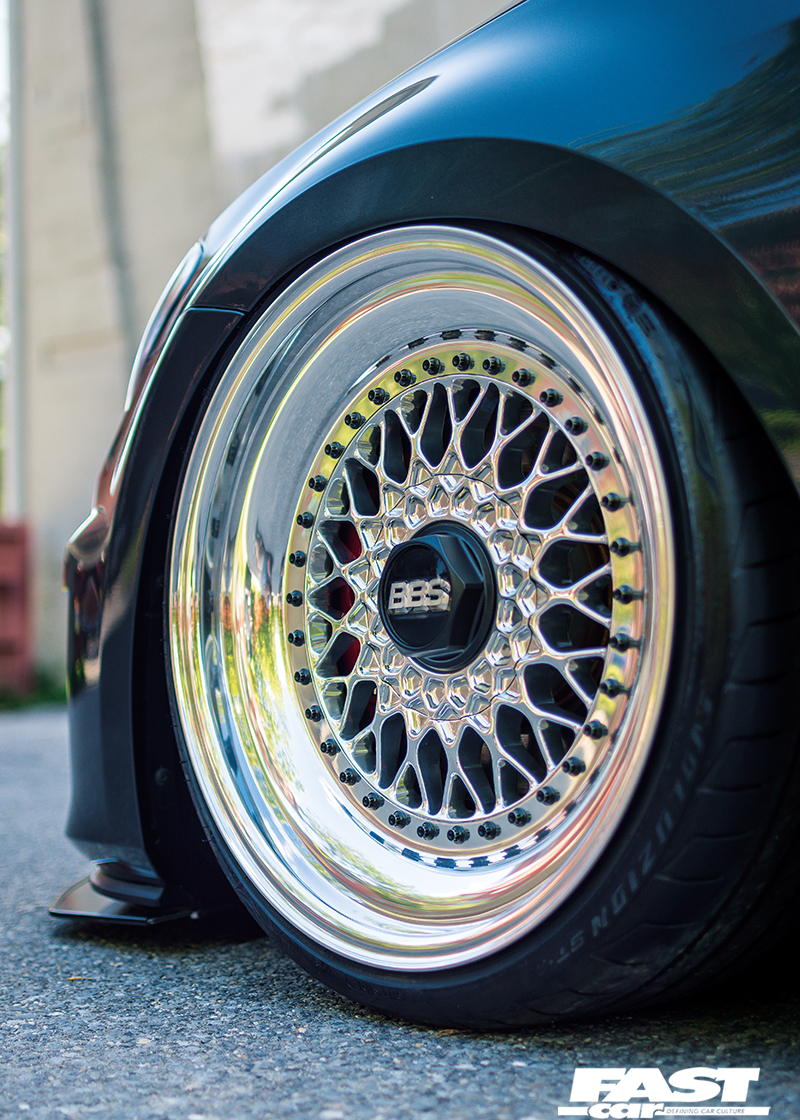 So how do we get from an 8V Scirocco to a MK7 GTI? Through a series of MK2s of course. After selling off the Scirocco in 1998 or so, Geoff found himself in the driver’s seat of his father’s former MK2 16V GTI. That car was privy to the same royal treatment as the Rocco, just with with more dignified bits. Other MK2s entered and exited his life prior to a 1991 big bumper 8v leaving its indelible mark before its departure. “It was sprayed in Audi’s Nogaro blue. It was beautiful,” Geoff beams. “Dual round headlights, a mid wing, mint factory Recaro interior, lowered on Neuspeeds…what this car lacked in speed, was made up for in “wow” factor. [It was] as close as I’d ever get to those incredible MK2’s on all those PVW centrefolds hanging throughout my room,” Geoff laughs. Unfortunately, a friend’s jackassery wrote off the hot hatch no doubt before its prime. Gone, but certainly not forgotten, his love for the Mk2 and the GTI itself was put in a holding pattern as he touched down on various other Wolfsburg offerings.

The joy of the Mk2s of yesteryear continued to fester, however, as countless #TBTs passed and calendar pages turned. “I guess you could say around 2016 I started to miss the good old days. A midlife crisis if you will,” jokes Geoff.

“I had my eyes on a Carbon Steel Mk7 Golf GTI at a local VW dealer that had not sold in months due to the MK7.5 rolling out,” says Geoff, about to reveal some top shelf negotiating tactics. “I went into the dealer on Dec 15, 2017, knowing they needed to make room for the rapidly arriving facelift version and haggled them way down from sticker price. This process involved me sticking to my number, which they stated they could not do, and me walking out. I got about 10 miles down the road and they called me back saying they can let it go for my number. So I turned right around and had no choice but to take it. I drove it home the very next day.” Result! 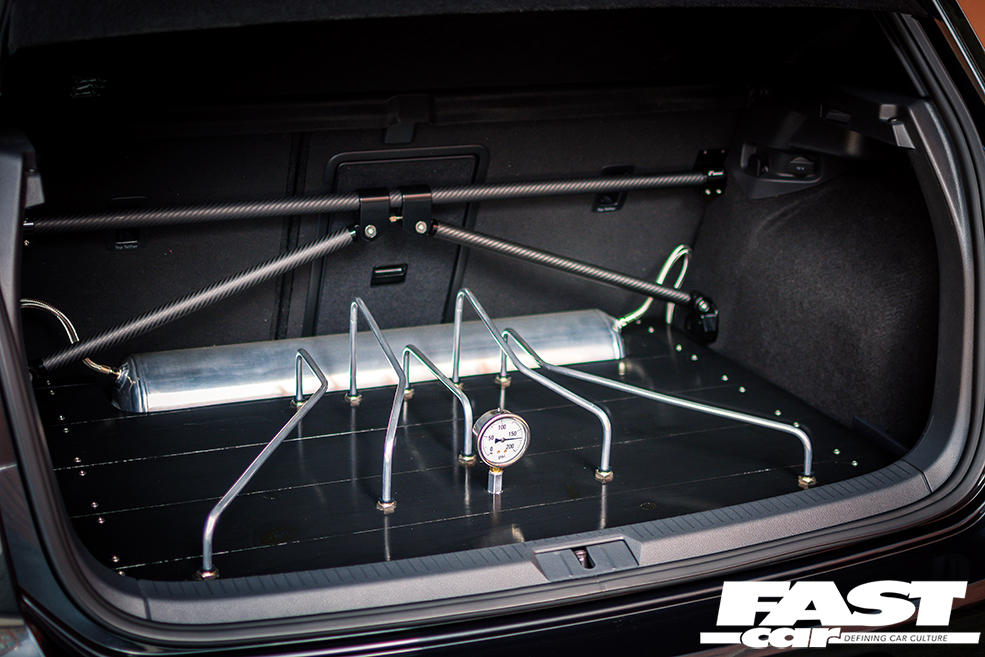 You could expect that with a shiny new ride on the drive, perhaps keeping it stock until the first few payment stubs were submitted would be the prudent choice. But no, nearly one month to the day of ownership, an entire Airlift setup was purchased. “I had no immediate intention of doing anything to the car,” Geoff relays to us. “I told myself I was buying it for a reliable daily driver.” Where have we heard that one before? Oh, probably from every single new wave whip wrangler we’ve featured over the past two plus decades. At least he had a plan. There are so many that have come before him that have just thrown dollar bills at the wall to see what gets picked up.

“Clean and simple was the goal and I never really steered off that path,” Geoff tells us. Let’s take a stroll down that path together now. A few deep thought sessions to rationalize the intended direction cemented the Mk7’s future. And four days after the airride arrived, the sills were sitting on the ground and Geoff was buckled in for the ride. “My immediate focus from there was to be patient and not rush anything,” opines Geoff, “and put the car together in a very tasteful/OEM plus kind of way without getting too flashy.” Although, a look in the trunk will reveal a hardline display worthy of MoMA. 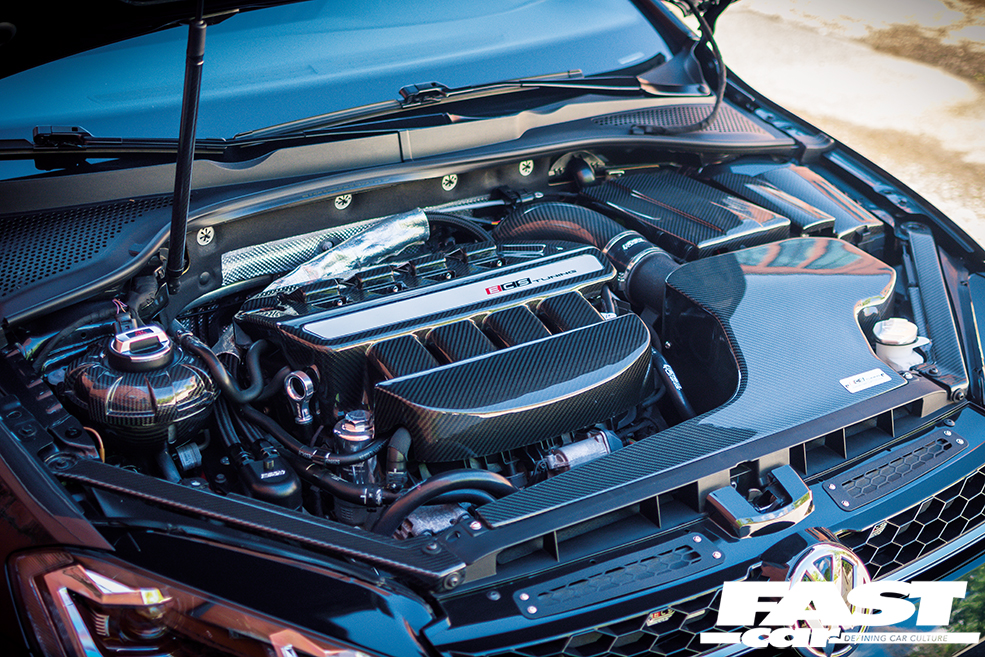 Spring 2018 saw the spotlight shift to the engine bay. Geoff went through the air and fuel systems, added the obligatory front-mount intercooler and dressed up the rather uninspiring under-hood appearance. Being the hands-on type, he installed a panoply of performance parts, including a Luft-Technik carbon fiber intake, Grams Performance injectors, and HPA high and low pressure fuel pumps. The best of the Pro Tuned IS20 turbo was brought out by BrenTuning to the, err, tune of 338 WHP and 395 lb/ft. “I don’t always run that tune because it is super aggressive, but it is wild,” says Geoff. “If I can get it to hook up on some warm asphalt it pulls like a freight train. I usually run a stage 2 E Tune that’s a bit more modest and reduces the chance of blowing something up,” he laughs. “I worked on it with Equilibrium Tuning, sharing drive data with them back and forth through my Cobb ACCESSPORT and emails.” That said, running a team of 310 thoroughbreds through the front wheels is still substantially more than the stock offering. All that power certainly wasn’t being harnessed by a stock clutch so an ECS stage 3 unit was employed to handle the extra power. Geoff’s buddy Kevin Gilmartin assisted with the install as he had access to a lift. It’s good to have pals in high places. 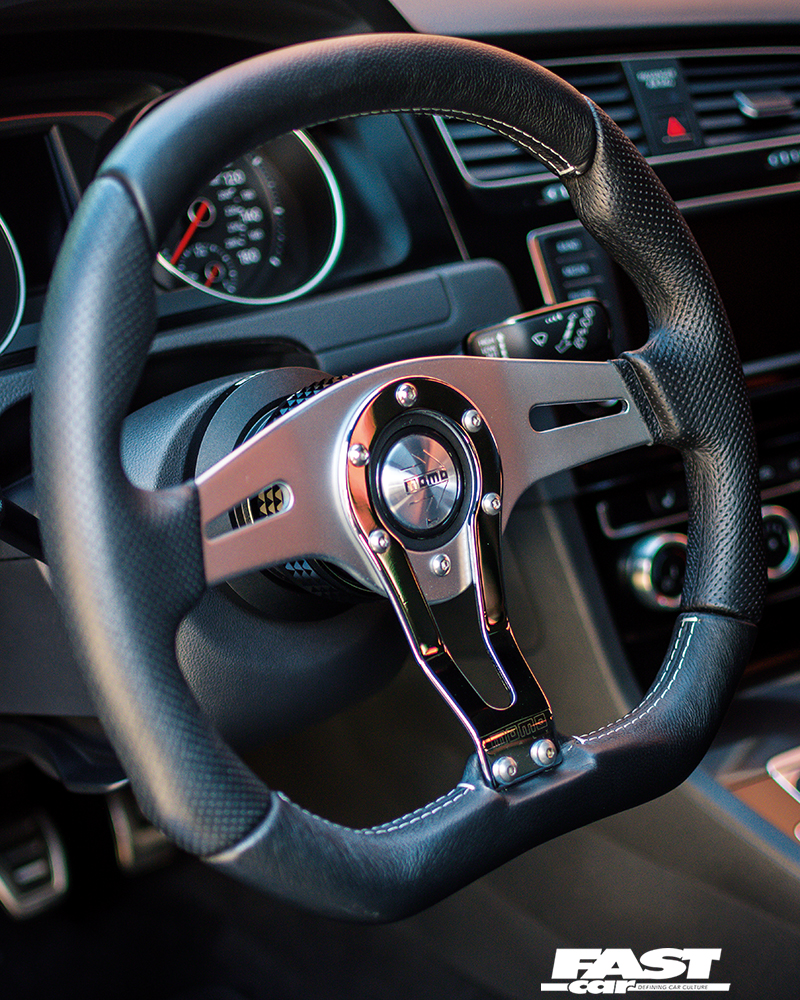 And Geoff didn’t just go straight to stage 3 on the car without passing go. “I wanted to see how far I could push the IS20/2.0T combo.” The car is, however, set up to accept a larger turbo in the event the IS 20 files for early retirement. There was also talk about possibly doing a shaved-bay Atlas VR6 swap in the future, but with child number two on the way and a recent purchase of a 1960 German-built Beetle, the GTI may remain in its current copacetic state for the foreseeable future.

Now, as any OG worth their scene points will know, wheels can either be the golden ticket for a project or send it straight down Willy Wonka’s bad egg chute. The first set of wheels were 3SDM 0.66, a nice looking, motorsport-themed design. Yet with Geoff drawing strong ties to his MK2 past, there really was only one proper set of hoops. “In September of 2019 a friend of a friend was parting ways with a beautiful set of RS’s he had built for his MK5 and wanted more than anything for them to go to a good home,” Geoff fondly recalls. “I knew this would not allow me to do a brake upgrade if all went well but was worth it in my eyes.” With the decision to act on this fortunate timing, Geoff and his young daughter Penny hit the road for New Hampshire to see if they were as good in person as they were in his mind. “They needed a repolish and a little love but were exactly what I had wanted on the car.” Originally 16”, the BBS RS were stepped up 2” and feature satin black hardware and hex caps. Sam of 5-star Google review Sam’s Euro fame was enlisted to bring them back to the current shine you see here. 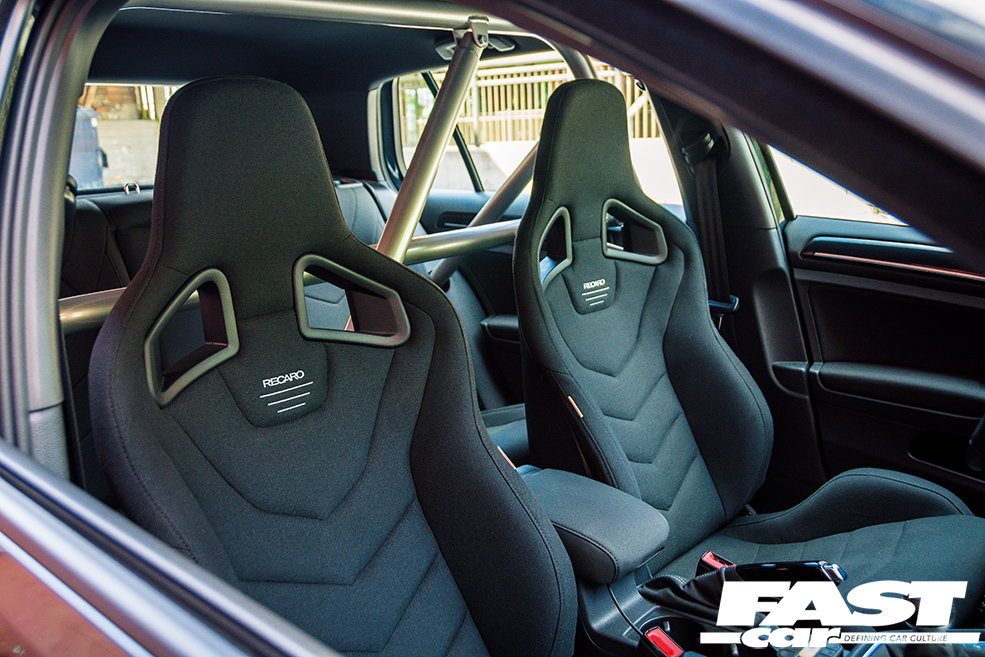 Once the wheels were fitted, the final push was the interior. “I gutted the car’s interior and brought it to a shop local to me along with the new Recaro fronts,” says Geoff. That shop, Seamless Customs in nearby Leicester, Mass., did a bang up job on the upholstery, another nod to the MK2 GTI. In a few weeks’ time, the interior was back together and Geoff had installed the Autopower half cage. At this point, it was about time to hang it up and enjoy the finished product.

A peep at the rear seating area and it’s clear child car seats are no longer welcome. “My oldest daughter Penny will be able to ride shotgun soon in a booster so I look forward to that. The girls will often follow me to events, which works out if they don’t want to hang all day, or we get a sitter and my wife will roll with me.” Being in New England allows Geoff the privilege of attending such shows like NE Dustoff in Connecticut, Vacationland VAG Fair up in Maine, and Eurobuilt in Vermont, with the GTI placing at all of them. “Nowadays, I don’t often register the car,” Geoff admits. “I just love to see all my people and catch up. I have been volunteering the past couple years for my buddy Scott who puts on Eurobuilt VT. It’s just great to be with all my homies and do what we love.” 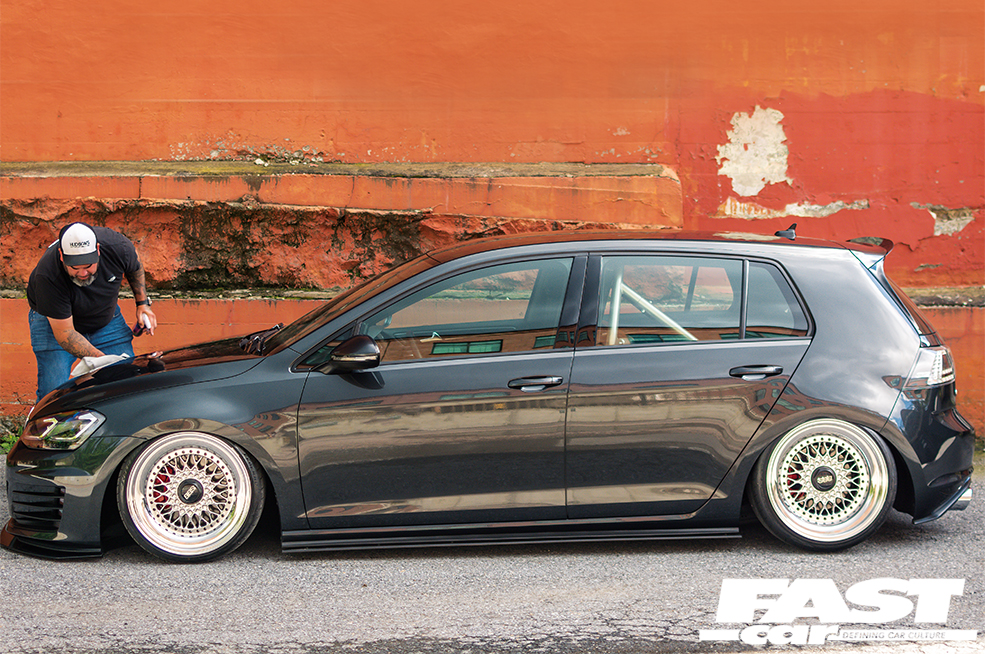 And with that we come to the end of our tale of a modified MK7 Golf GTI that’s materialized its owner’s MK2 memories by bringing the past into the present. “I wanted this to feel like a newer version of what those cars were to me,” Geoff reminisces. “From the wheels to the Recaro embroidery. I think about the old days every time I drive this car. I go right back to being 20 again. For many of us, there is no greater joy than the warmth of youthful remembrance. 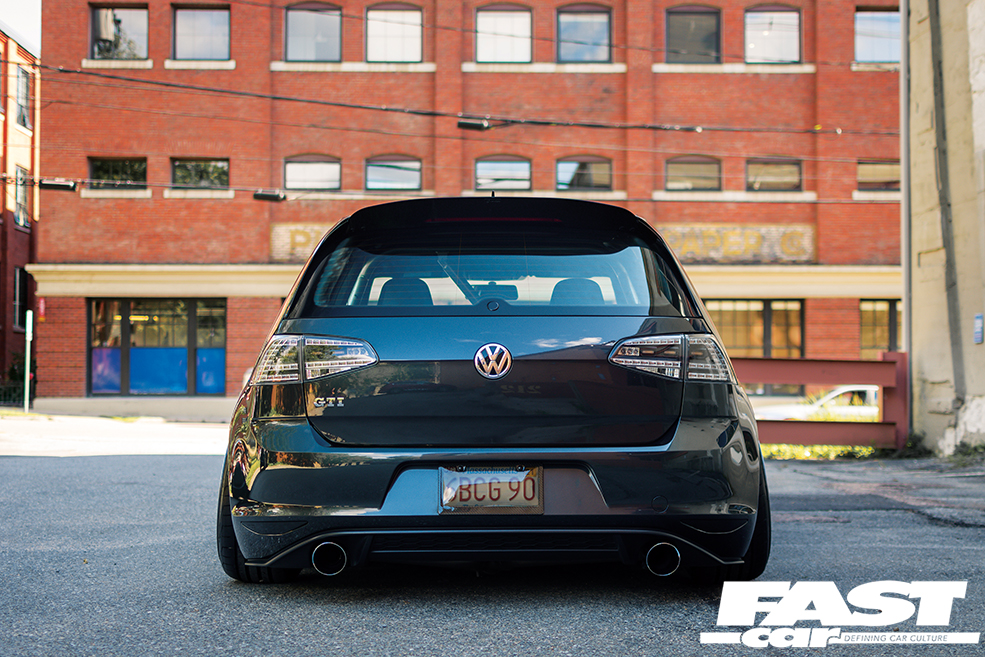