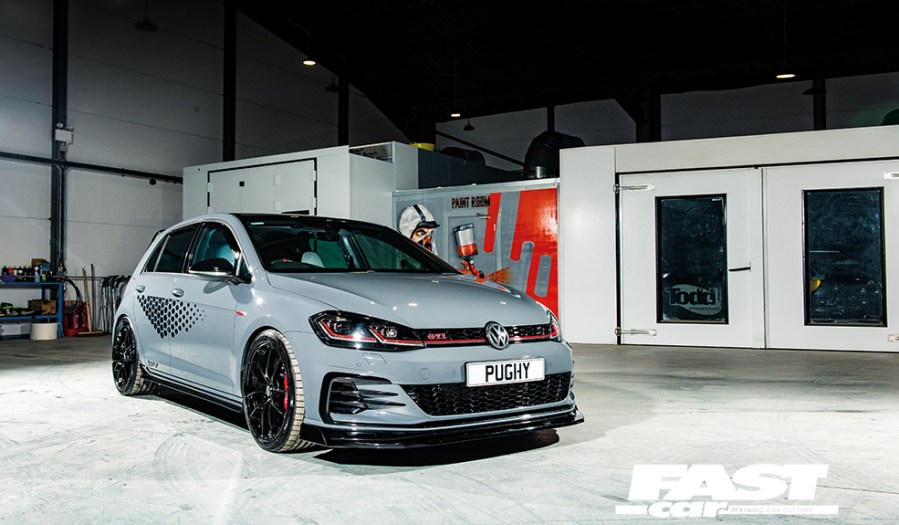 With a Nürburgring trip looming, Martyn Pugh set about turning his modified Golf GTI TCR, which is already a motorsport-derived car, into a 500hp successor to the lap record-setting Clubsport S.

Seven minutes, 49 seconds and 21 milliseconds; that’s all it took to change the Golf GTI’s reputation forever. After 40 years marketed as a machine for life’s marathons rather than its sprints, the Clubsport S showed Wolfsburg’s engineers had a wilder side under the surface. Lapping the Nürburgring three seconds faster than a Civic Type R, it shuffled the GTI into the upper echelons of the hot hatch segment and laid foundations for a new era of track-tuned specials which is continuing into the Mk8. Better late than never, we reckon.

“I’ve had all sorts of cars, including M3s, M4s, R8s, but my favourite was the Clubsport Edition 40 – I’ve had three of them,” he tells us. “They were all running around 450bhp and were unreal on track days, I took them around Castle Combe, Llandow, places like that. Then I got wind of the TCR coming out, so I put an order in straight away. Just looking at the pictures, I knew what I wanted to do from start to finish; I wanted to make the perfect track car and take it to the Nürburgring.” 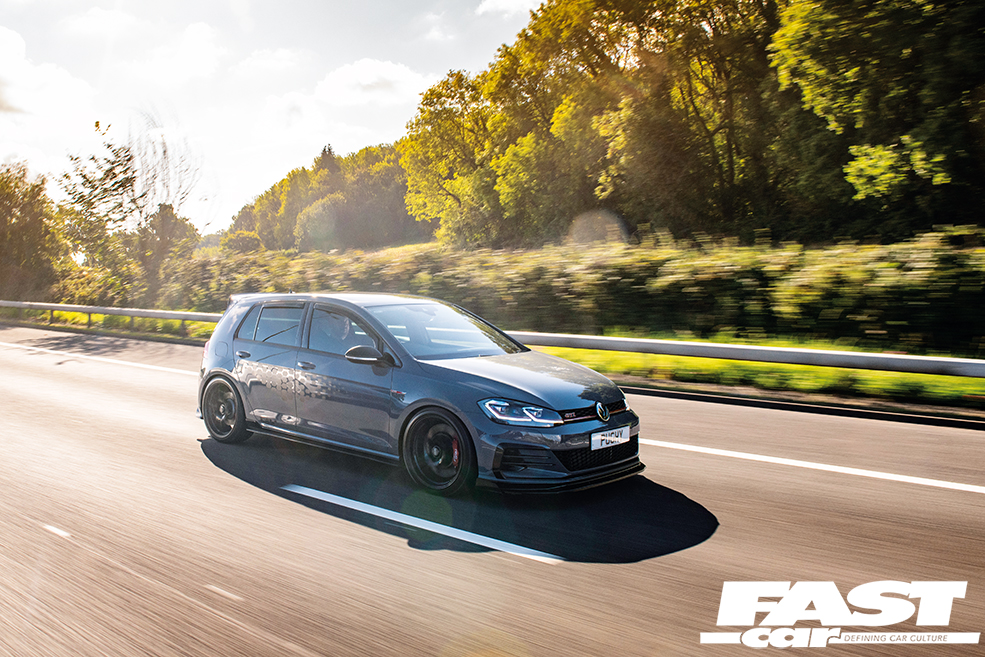 These were plans formed 500 miles from the toll barriers of the Nordschleife car park. Martyn is the owner of Newport Accident Repair Centre in South Wales and, alongside a steady stream of prang-fixing work from the nearby main dealer, the workshop brings in a broad mix of high-end, classic and custom machinery from all over the UK. Naturally, that mix includes a few of his own projects along the way; his ‘Daddy Caddy’ shop truck, with its GTI/Touran mashup front end, Bentley wheels and custom paint made the pages of Performance VW back in June 2015.

So the TCR had big shoes to fill, and it wasn’t chosen lightly. “I wanted to replace the Edition 40 on the road and track, and the Golf Rs are crap. They’re heavier, they’re lumpier, the body rolls more. All they’re good for is launching with the four-wheel drive, you can’t chuck them into a bend like you can a TCR or Clubsport. There’s no comparison.”

The Golf arrived at the dealer in March, already well equipped for what he had planned. It’s an all-options ticked version, including the 19-inch wheels pack which adds lower-slung adaptive suspension, and the TCR-specific Pure Grey paint and honeycomb side graphics. One of the last Mk7s off the line, the wait for a factory order was a price worth paying, but that standard spec lasted all of six miles before he started dismantling it. 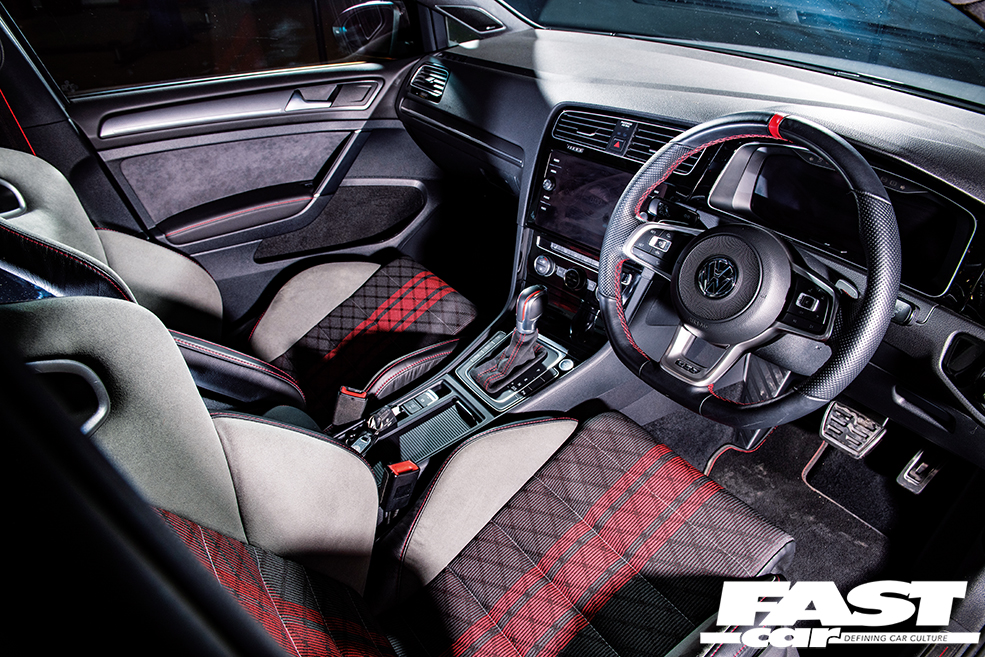 We’re not talking minor surgery, either. The tyres would barely have shed their moulding marks by the time the Golf was separated from elements of its bodywork and drivetrain. With no model-specific parts available, the deeper splitter is a hybrid of Maxton Design parts, comprising a Mk7 Golf centre section and RS-3 side fins, while the TCR’s subtle tailgate spoiler was replaced with the multi-element part from a Clubsport S.

Arced above the roofline, it’s a functional component designed in the wind tunnel to increase downforce on the rear wheels at high speed. It’s also a conversion that leaned on his trade contacts at the nearby parts department. After all, why not make the most of Wolfsburg’s wild-side engineering?

“The spoiler was a bigger job than it looks – I had to fit a Mk7 boot lid, replace the side trims on the glass and part of the wiring harness, because the brake light uses a different plug,” he explains. “But it’s a must. The TCR has a standard boot lid with a little black lip spoiler, and where the back bumper is flared with the valance, it makes the roof look lop-sided. It looks nice and level with the Clubsport spoiler.” 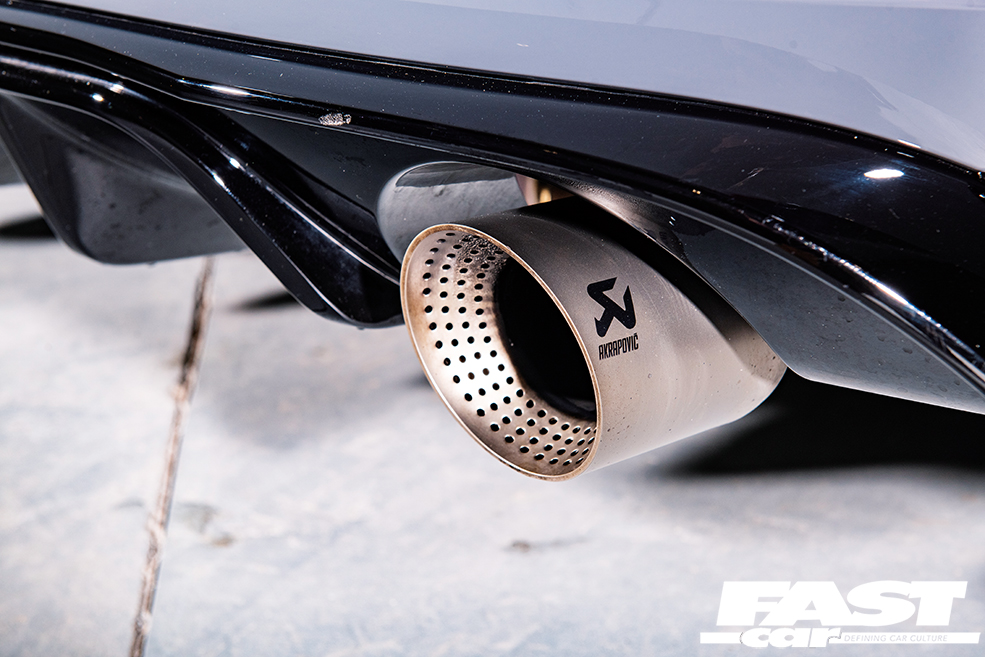 Up front, the space behind the bumper is now filled with a freer-flowing Wagner intercooler and turbo hard pipes, while the factory Akrapovič titanium exhaust is paired with a Milltek de-cat downpipe, all fitted at Martyn’s workshop. With the engine more closely related to the R than the standard GTI, the TCR came equipped with extra radiators ready for more power, and polyurethane powertrain mounts help rein in the powertrain movement when it’s working hard. Having had the same package of upgrades on the Edition 40s, it was a no-brainer taking the same route with their replacement.

However, wringing that extra potential out of it required some specialist input, he says. “I had APR maps on my Clubsports, which were good, but when the TCR was delivered, nobody had developed a map for it. When I researched it, MRC was the best for live mapping on Volkswagens and Audis, so I sent the car to them. They had for six weeks, and it came back feeling immense; the power curve, and the way it pulls through all the gears is dialled in perfectly.”

Of course, with two fewer driven wheels than a Golf R, it pays to be selective with the parts he’s tasked with keeping it on track. So there’s a no-expense-spared setup under the arches, which feels wholly worthy of an OEM record attempt. The GTI features thicker Eibach anti-roll bars with electronically adjustable Bilstein B16 coilovers, providing different settings for road and track as well as the ability to set the corner weights perfectly. At 380mm, the discs of the Revo big brake kit aren’t only 40mm larger than the already-upsized factory setup, they’re also marginally bigger than the full-fat GTI TCR race car. 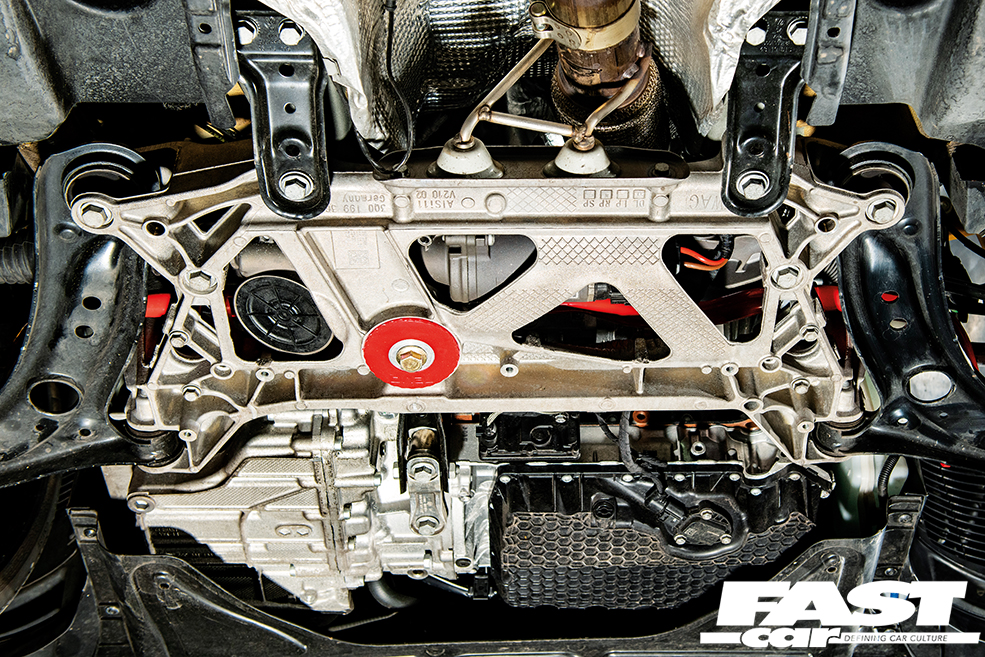 The more Martyn runs through the decision process, the more you get a feel for how carefully every detail has been handled from a usability perspective, as well as outright performance. “Because the Revos are made by Alcon, it’s easy to get parts for them. You don’t want to be spending £3,500 on front brakes only to find that in 12 months or whatever, they’ve got hot and the rubbers need replacing but you can’t refurbish them,” he explains.

“The problem was, with the first set of wheels I had on the car, I had to use a 5mm spacer with longer bolts so they’d miss the calipers. In my mind, if I’m hitting 160-170mph and going to the Nürburgring, I don’t want to be running on spacers and aftermarket wheel bolts. So I changed the wheel to a different offset, and it cleared the calipers.”

It’s a stance that subtly hints at the extra performance available here. The reduced offset – ET38 as opposed to the factory ET50 – offered enough space for a slightly wider 8.5-inch set of lightweight OZ wheels, wrapped in unstretched Continental rubber for road use. Martyn has a set of Michelin Pilot Sport Cup 2 tyres ready and waiting for its first track outing, which puts the TCR in good company. They’re the same rubber fitted to the Clubsport S when it set the Nürburgring record. As recommendations go, it’s a good one. 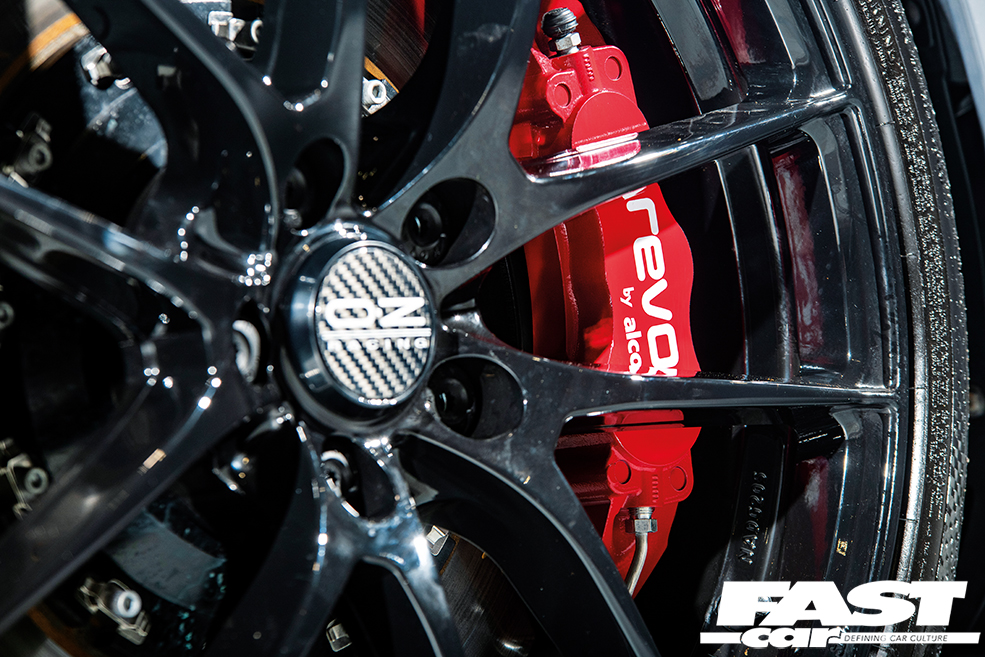 “A few minor tweaks to the suspension, the bushes and parts like that have made a big difference to the way it drives,” Martyn beams. “If you want to drive it normally you can just put it in Comfort and, though it’s still a little bit firm, it’s not clunking and rattling around. It’s just a nice, firm, Golf. Then you put in Sport, and it unleashes the beast.”

But you get a real sense of that creative process inside. Whereas the Clubsport S had been fitted with tartan-clad wingbacks, which were offered as an option for the Edition 40, the TCR’s front seats were as lacking in visual impact as they were lateral support. Volkswagen went as far as trimming the standard GTI seats in anthracite-coloured microfibre with a unique red and black pattern in place of the usual tartan. It’s an omission you could forget about stepping into this one.

With access to genuine parts, Martyn filled that gap himself. The front seats are genuine Clubsport wingbacks, ordered new and retrimmed in the TCR fabric, complete with the headrest graphics, by Sew Good Upholstery based nearby. If you need to ask how much that upgrade cost… well, you know the score. Quality doesn’t come cheap, but good seats are a must-have if you’re serious about taking on the topography of the Nürburgring without clenching on every bend.

“He’s done an amazing job – if you didn’t know the TCR wasn’t available with those seats, you would think they’re factory-fitted,” he says. “It’s the only one in the world with the Clubsport seats trimmed in the TCR fabric. Anybody who works on my car knows it’s got to be perfect, so I haven’t messed about. The car owes me a lot of money, and I haven’t cut corners with anything.” 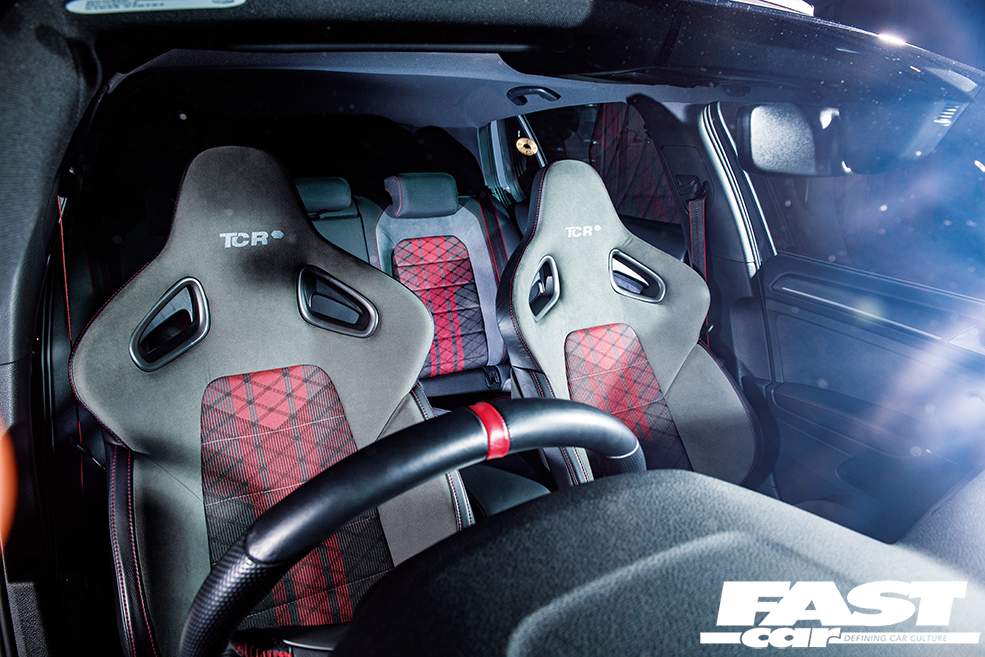 Of course, that applies most to the ever-evolving engine spec. There are few clues on the surface, but it’s a GTI with performance far in advance of the fastest factory-spec hot hatches. The Racingline intake pulls cold air from the full width of the grille, then through a Turbo Technics T3 ‘charger, while the management uses the first Stage 3 MRC map flashed to a TCR. The resulting 500bhp should be enough to outpace its lighter touring car namesake – limited, as that is, to 350bhp by class rules.

Similarities with the full-fat modified Golf GTI TCR don’t end there. Tucked in on the left-hand side of the engine bay, the Golf features a Racingline oil management system and catch can, designed to alleviate the EA288 engine’s tendency to get oil build-up in the front of the head under heavy braking. It’s a similar design to the system used to avoid catastrophic oil starvation in touring cars that use the same powerplant, and a straight swap which only requires the washer bottle filler to be relocated further forward in the bay.

Rounding off the spec is the latest generation of APR’s new transmission map for the TCR’s seven-speed DSG. Capable of outstripping all but the fastest manual gearchanges in standard spec, the new software provides near-instant paddle shifting, sharper responses from a standstill and programmable launch control. All of which gets put through an electronically-controlled locking differential which was factory tuned for the aggressive pursuit of on-track traction. 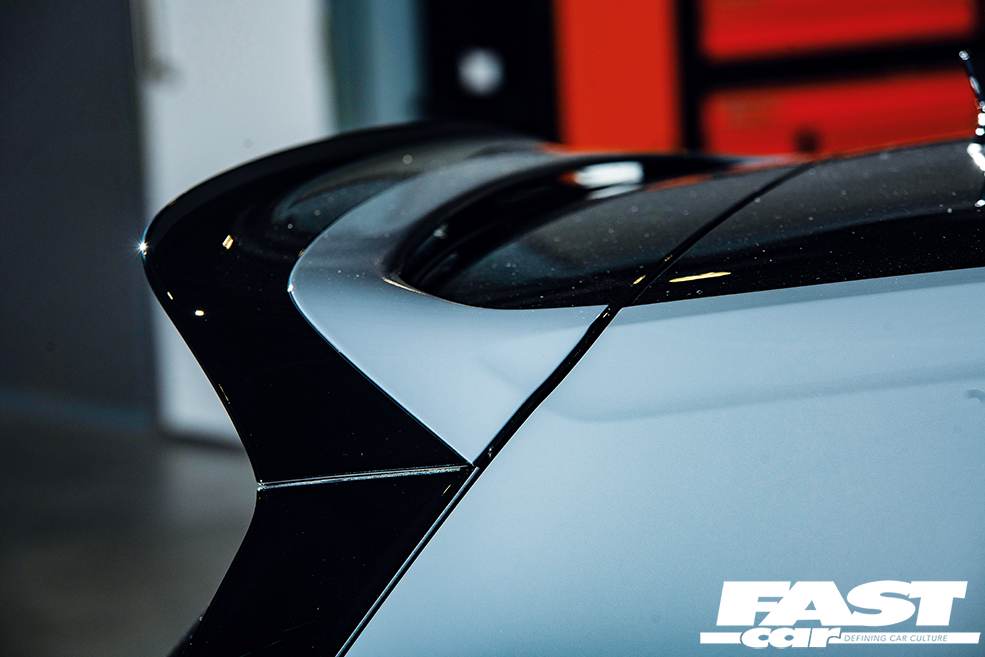 “It puts a smile on my face every time I jump in and drive it,” says Martyn. “I mean, I thought the Clubsport was good, but the modified Golf GTI TCR makes them feel slow – not just the power, but the torque delivery is something else. So I’ll have it back out at Castle Combe and places like that, when they’re open again. It just needs a nice dry day so I can get the tyres nice and hot and really give it everything it’s got.”

Unfortunately, though Martyn isn’t someone prone to hesitating when it comes to getting into a project, the Golf is going to have a slightly longer wait before it gets a chance to show what it’s made of. For obvious reasons, the long-awaited trip to Nürburg has been cancelled twice already, and he’s got one eye on travel restrictions in the new year for a window of opportunity to tick that final missing component off the TCR’s story. Better late than never, we reckon. 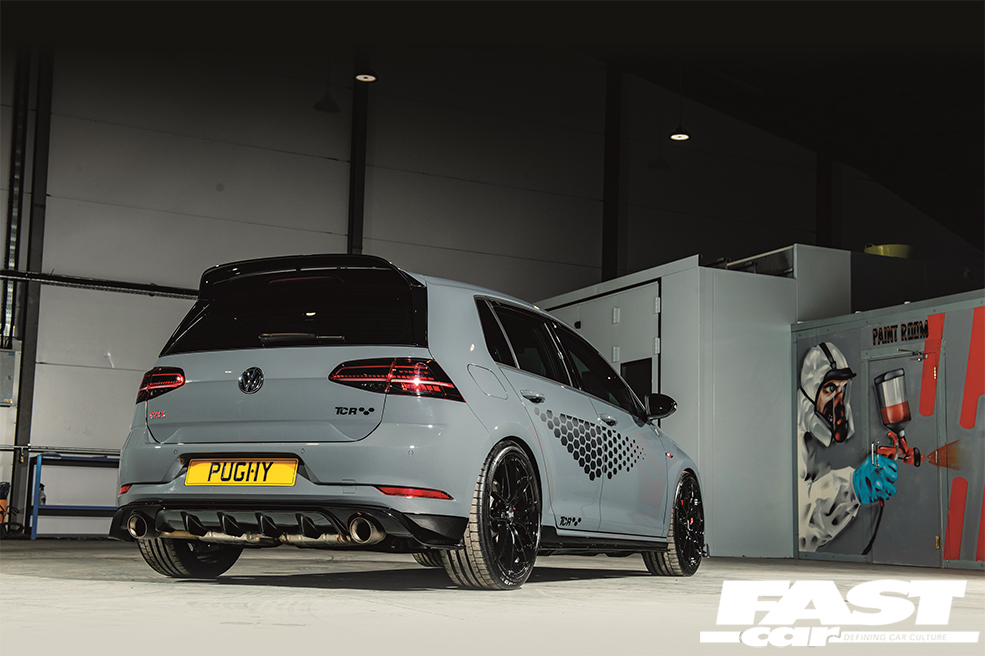