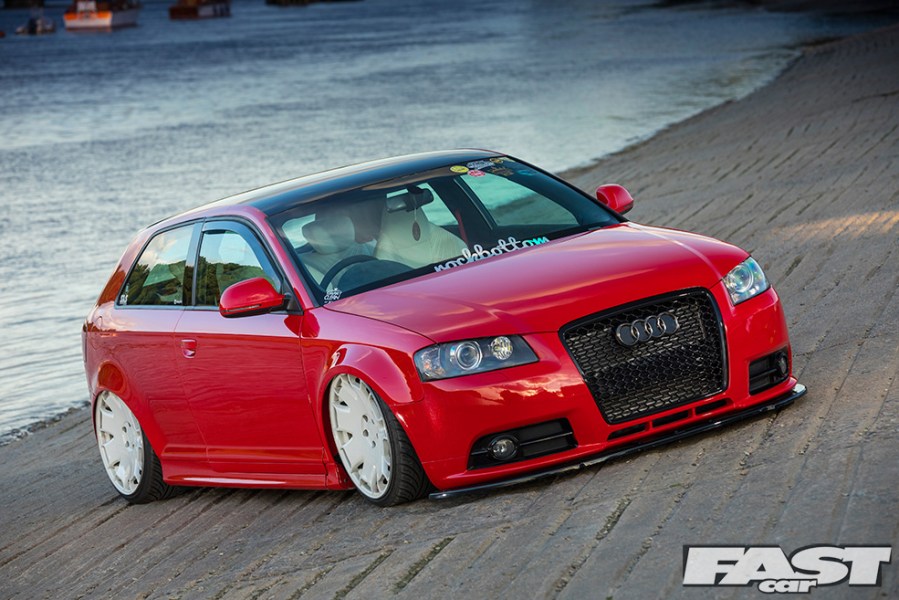 Can’t afford to buy a fiery Audi S3? You could always do what Jamie Bryant here’s done and painstakingly craft your own from scratch on your driveway…

We think it’s important to get something out of the way before we delve too deep into the tale of the fabulous car you see here before you: this definitely isn’t just another run-of-the-mill Audi A3 slammed on big rims. In fact, the extensive graft that’s gone on under its unassuming skin by its proud owner is so impressive, it really should have its spec list printed in big letters all over it for everyone to see.

Things started familiarly enough for our man Jamie here, who a couple of years ago faced the age-old balancing act of wanting to make his car pokier and a little more unique, with the limited funds that come as a result of having a life. The car in question? A boosted 2.0-litre, front-wheel-drive version of Audi’s second-generation A3; a fully respectable hatch that businessmen could get away with describing as ‘pokey’, perhaps, but not one that would win drag races and show trophies in standard trim, that’s for sure.

If you’re half decent with a spanner, however, Jamie’s mind-set is that nothing should stop you from creating your dream car if you’re not afraid of using some elbow grease every now and then, regardless of your budget restraints. A fact he’s since proven rather well, actually, after recent pangs for an all-new, third-generation Audi S3 left him with one of the most comprehensive A3 builds we’ve seen in a very long time on his hands…

“I liked the idea of the power of the new car, but loved my second-generation A3 looks…” Jamie begins to hint at the fusion of Audi products he’s since managed to create. You see, things have come on a long way with car tech in the last decade, meaning the new S3 can hit 62mph in a supercar-troubling 4.7 seconds thanks to its fiery four-pot motor, clever dual-clutch ‘box and fancy Haldex Quattro four-wheel-drive system – none of which were present on Jamie’s original car, unfortunately. “A mate told me he’d found an entire S3 running gear for sale, and after some negotiations I ended up buying the whole thing…”

Certainly cheaper than snapping up the whole car, but what was he planning to do with this fancy modern drivetrain exactly? We think you can probably guess… “I swapped the engine, gearbox and 4WD system into my car on my driveway,” Jamie tells us, as modestly as if he was talking about putting the bins out.

But where on earth do you even start with a project this colossal? “Firstly I took my car apart, and then I converted the manual gearbox over to the DSG unit,” Jamie continues to calmly explain how the conversion went down. Dropping a monstrous dual-clutch gearbox into a car that isn’t designed for one is no mean feat, requiring Jamie to modify the firewall to allow it to fit properly. Lucky he runs his own fabrication company – JABS Autoworks – for a living, then!

Once it was in, however, the next hurdles involved doubling the amount of wheels on the car that put drive to the road… “It was a bit of a pain in the arse trying to hold up the rear Haldex unit while I bolted it into the boot floor, and I had to make some new mounts for the prop shaft with the help of SAS Autoworkers, but we got there in the end!” Jamie grins. Requiring a whole new boot floor to be welded in to house the rear differential, we’d say this job would probably warrant more than a one-spanner difficulty rating if it was to feature in a Haynes manual…

Getting the running gear physically wedged into his humble Audi shell was one thing, but once the manual labour was out of the way, Jamie soon faced an equally as mammoth task: trying to get the modern drivetrain to talk to his slightly older hatchback base car. “It had more lights on the dash than a Christmas tree, and I’m still not fully finished, but I’ve got to say a big thank you to Dave at Quattro Tech for the endless phone calls regarding the wiring and for supplying me with the loom diagrams to help me make sense of it all.” Sounds painful!

While most would celebrate this incredible achievement by falling flat on the floor in a pool of sweat, or maybe flooring their now-stupidly fast car with a huge grin on their face for hours on end, Jamie was nowhere near finished yet. “I always wanted a show car, so began saving and working harder until the little bits started coming in to add to it…” he reveals. This process was repeated time and time again, until he had a bit of a show-killer on his hands in its own right.

Added to that fiery new motor (which already sports 300bhp from the box, we hasten to add) were the likes of a Forge intercooler and straight-through exhaust system, to squeeze even more horses out of that incredible package. The Quattro 4WD system is complemented with a top-spec Air Lift air suspension kit, too, with the car propped up on some lavish Ispiri alloys housing the beefy Brembo stoppers which were fitted to the S3 the drivetrain’s from. Can you tell Jamie doesn’t do things by halves yet?

Styling-wise, it’s down to a custom re-spray with some accessories lifted from sportier Audi models to complement the outside, while Jamie’s cockpit has been transformed in a sea of Alcantara and leather covering the likes of those tasty S5 bucket seats, the iPad-housing dash and the beefy Cerwin Vega ICE install out back – making it a seriously pleasant place to spend some time!

In his four years of ownership, Jamie may have had his car stripped down to bits on his driveway more times than you could count on your hands, but we think you’ll agree the end result is physical proof that putting in the hard work to something you’re passionate about is always worth it. With a host of quality cosmetic mods alone making it a stand-out show car, it’s only when you dig beneath the surface that you discover those shiny bits really are just the tip of the iceberg. Never judge a book by its cover…

SHOUT
I’d like to say thanks to Dave at Quattro Tech for endless phone calls about wiring and bits I got stuck with; Reuben at Tuning Werks; Sean at Inspire Automotive for doing my seats and my friends and family.