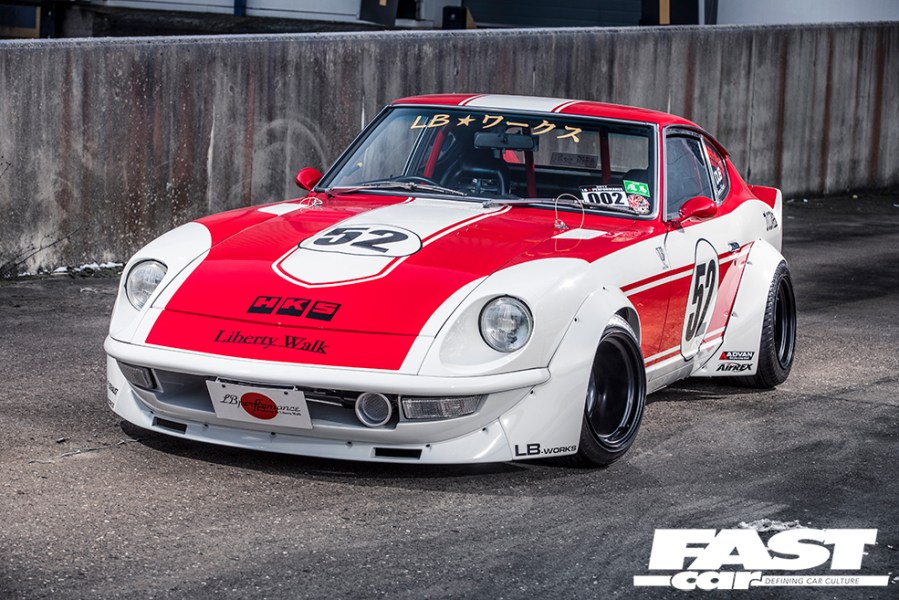 Newcomers to the brand might think that Liberty Walk is all about widebody Lamborghinis and purist-baiting McLarens.But Kato-san’s own Fairlady Z shows just how much heritage and passion there is behind all this…

Our favourite cars are the ones that raise a few questions, that get people scratching their heads and desiring further information. Consider the nature of Liberty Walk, for example: here’s a company which has drawn a line in the sand for modern modifying, pushing the limits of what’s possible with aesthetic upgrades for performance cars. Take a look at their website and you’ll see their latest widebody offerings for the likes of the Lamborghini Aventador, Nissan GT-R, Toyota GT86, BMW i8, Ferrari 458… fast modern cars amped up to brutal extremes. So why has the European show scene recently been abuzz with a 1970s Datsun – one sporting Liberty Walk logos, but not wearing a brutal Liberty Walk overfender kit? The answer is that the machine you’re looking at here is as much a symbol as it is a car. It belongs to the company’s effervescent founder, Wataru Kato, and it essentially encapsulates everything he loves about car culture, and what his world-renowned brand sets out to achieve; namely, dropping jaws and broadening horizons.

Kato-san is an irrepressible innovator, there’s no denying that. He’s the kind of man who’ll buy a Ferrari F40, then buy another one so that he can modify it; nothing is taboo in the world of Liberty Walk – if it’s cool, it’s cool, and no car is untouchable because they’re just things after all. And this unerring and ineffable passion is fed by the performance cars and racers of the 1970s, the cars that first sparked his passion for modding and tuning. The Datsun S30 is the ideal canvas for this sort of treatment too – sold as the Fairlady Z in Japan and the 240Z elsewhere (then the 260/280Z when larger engines were added), it’s essentially the Japanese E-Type, with race heritage in spades, an integral thread in the tapestry of Japan’s automotive heritage.

The initial inspiration here stems from the Fairlady ZG. This was a domestic model released in 1971 to homologate the car for Group 4 racing – it had a longer fibreglass nosecone, the so-called ‘G-nose’, along with wider Works bolt-on arches and a rear spoiler. It’s the ZG look that Kato-san has ingeniously reworked here, and you may already be aware of this car’s earlier two-tone grey guise, images of which flooded the internet seven or eight years ago. It was smooth, lean, taut and muscular, looking like a cross between a US custom and something from a Manga cartoon. It sat static over SSR Jilba Racing wheels, and it reframed what a lot of people thought about the concept of modifying classic cars.

Fast-forward a few years, however, and Kato-san fancied a change. He’s an innovator, and never happy to rest on his laurels, it’s always important to keep pushing forward. As the Liberty Walk brand grew, so did his personal car collection, and this shakotan Fairlady, the jewel in the crown, was ripe for a makeover. Something that would make a lateral move from down-the-line shakotan to a fusion of Works/kyusha sensibilities and the kaido racer style – niche touchpoints within the Japanese retro modifying scene, blending into the old-school road-and-race look you see here. The panscraping static stance was swapped for a custom air-ride setup simply because the Fairlady was destined for a world tour and it wouldn’t get in the container on those wound-down coils, and the multi-spoke alloys were replaced by a set of hallucinogenically broad steel wheels with super-aggressive offsets, packing out those widened bolt-ons with nanometric precision. (The rear tyres are particularly noteworthy – it’s notoriously tricky to find fat race tyres for 14”-diameter wheels, so Liberty Walk now produce their own in 245/525-14 sizes.)

The overall profile of the car is slippery and bullet-like, that G-nose at the business end complemented by an AIRONE tailgate at the other; this one piece makes an extraordinary difference to the silhouette, changing the big slanted rear window into a flat deck with flying buttresses. Every inch of the car positively bristles with track-ready aggression. So the ethos of this car might be making a little more sense to you now – Liberty Walk’s modern cars seek to emulate the vibe of this badass retro; the width, the footprint, the rage, the careful eye for proportion. It’s a masterpiece.

The final aesthetic flourish in the makeover, after converting the custom smoothed rear panel from twin- to single-taillights, was to rework it in a fresh new livery. In the true spirit of the kaido racer, Kato-san opted to formulate a sympathetic evolution of the livery used on the classic Prince R380 race cars: slippery coupes on Brabham chassis with Skyline engines, with sloping noses and rear buttresses that are neatly echoed in Kato-san’s Datsun vision. This is masterfully blended with the stripes from Kunimitsu Takahashi’s KPGC10 Skyline GT-R race car – just one of an endless stream of references for the classic Japanese race aficionado to drink in with a knowing nod.

The interior is a real treat for fans of classic race cars, with a pair of gloriously vintage PRE bucket seats stretching subtly crinkled leather around those eyelets that evoke the Ford GT40 or Lamborghini Miura, with bright yellow shells to contrast with the red rollcage. The Fairlady has one of the all-time classic dashboards, its curves making it look as if the gauges are bursting through from within, and Kato-san’s augmented this with a whacking great Pro-Comp rev counter. Why? Because his L28 engine is no ordinary L28 engine…

It’s very much the Liberty Walk way to fuse eye-catching looks with devastating performance, and this wouldn’t be much of a kaido racer without a bit of race-car power. So the 2.8-litre straight-six was handed over to Garage Okazaki to rebuild it as something a bit more frantic and urgent. Their endeavours included putting in a lot of head work before boring and stroking the block to a smidge over 3.0-litres, with high-comp pistons, conrods and crank from KEW along with their own proprietary cams. The result of all this, as the hungry motor slurps through its triple Solex twin-choke carbs, is a motor that revs to over 8,000rpm and makes a noise like Satan’s dog gargling with wasps, spitting its spent gases through those upswept twins with a characterful rasp.

What’s important to remember about Kato-san is that he’s a connoisseur, and an expert on the roots of tuning culture; this isn’t just a job, it’s a lifestyle. He’s also a flamboyant character who’ll never settle for half-measures and loves to put on a show – that’s why he insists on infiltrating mainstream car shows and sneaking in the latest LBW-kitted McLaren, then parking his wideboy RX-3 outside and revving the nuts off its rotary just to scare people. He’s obsessed with the details, and the way a car sounds is integral to the plan; indeed, with the Fairlady Z, this takes on a classic twist in the form of its audio system… peer inside and you’ll see a period Pioneer stereo with separate graphic equaliser, and shelf-mount TS-X11 speakers – because that’s what the cool kids had a generation ago. Combine that with the induction roar from those carbs and the rasping tails, and you hear the Fairlady before you see it.

And when you do see it, your brain struggles to reconcile the blend of classic race car, flawless modern-standard custom work, contemporary stance and, quite frankly, the sheer cartoon-like weirdness of it. This is a car that raises a lot of questions – and it has satisfying answers for every single one. Is it what most people might consider to be a traditional Liberty Walk build? No, almost certainly not. But ask a few searching questions, and you’ll find that it’s really the most traditional of them all.