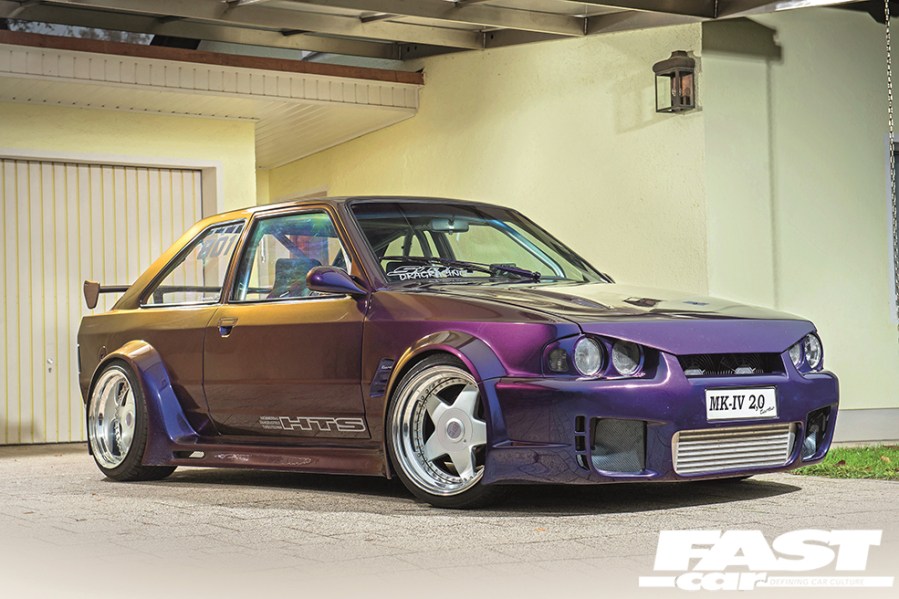 His name’s Dirk, he’s German, he’s built a Ford Escort Quattro, and by that we mean underneath that Escort is an Audi 4×4 system. Oh, and it can outrun a Bugatti Veyron!

It’s not often we’re thrown a complete and utter curve-ball feature car here. Over the years we’ve seen all manner of unconventional builds, from rear-engined rear-wheel-drive RS Turbos, to four-wheel-drive converted RS500’s, and from turbocharged Endura engines to supercharged Zetecs. But when we found a Mk4 Escort sporting a rarely tuned engine, running four-wheel drive, and rocking an old school ‘Bad Boy’ bonnet, we were intrigued. Intrigue soon turned to complete awe, when we discovered it also runs 9-second quarter miles at over 140mph!

The Ford Escort Quattro you see here represents twenty five long years of constant development and dedication, courtesy of owner Dirk Hecht. Dirk bought the car way back in 1995, as a fresh-faced 23 year old – it actually started off in life as an XR3i, bought cheap due to an insurance write-off which had left it with body damage, but a sound structure. Perfect for the German mechanic to unleash his skills on, and turn it into a unique extension of his personality. 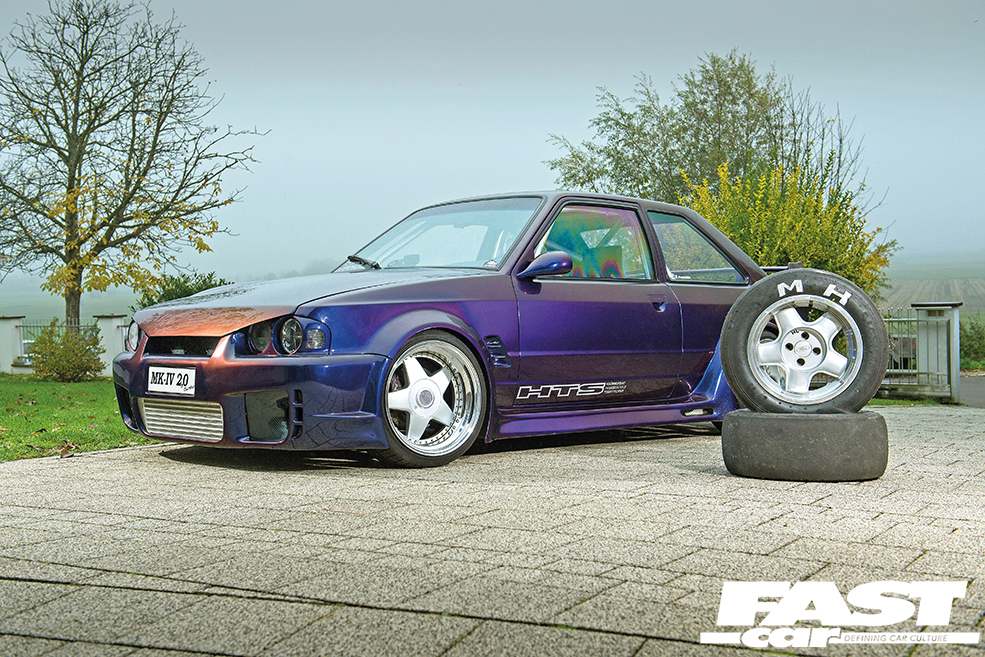 In those days, the German and European scene was mostly about loud bodywork, small deep dish rollerskate wheels and not much in the way of tuning. Older readers will remember this trend being dubbed the ‘Euro-look’, which was really started mainly by the VW guys but quickly adopted across all manner of Fords and also French cars to varying degrees of success! Dirk repaired the bodywork of the Escort and painted it purple – back in the late ‘90s, whereas the UK was full of Citrine Yellow or peppermint green builds rolling on TSW rims, the Europeans tended to go for deep metallics and purple was a popular colour. Resplendent in its new hue, the Escort was driven proudly to various Show and Shine events across Germany, and Dirk made many friends in the scene including with ‘Escort Team Grimma’, which has now disbanded but were once the coolest bunch in central Germany. 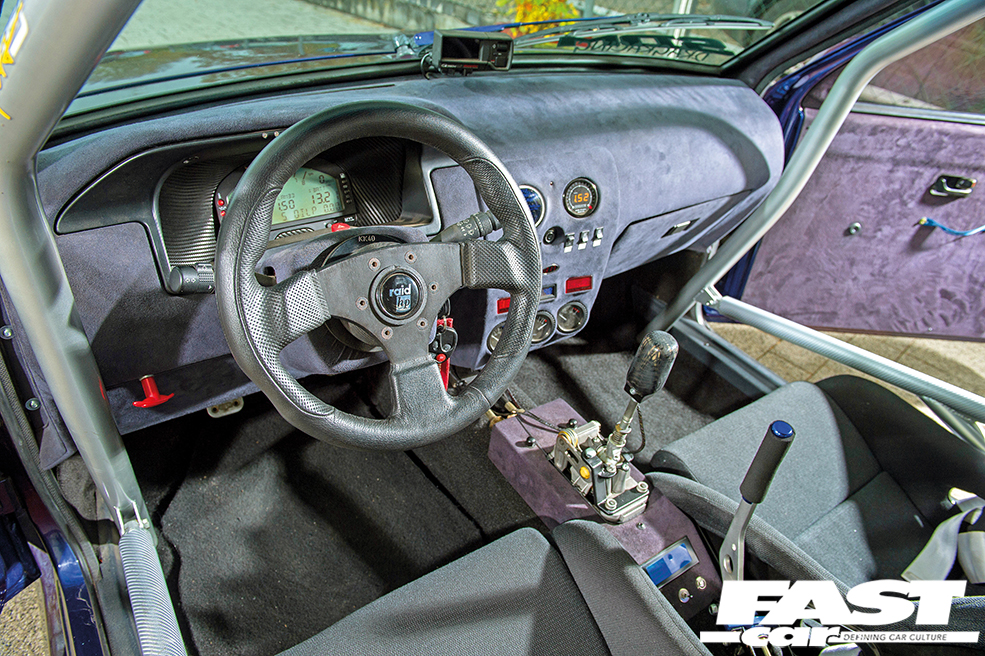 A few years of fun cruising to shows, and Dirk was hankering after more power. He found a Mk5 Escort RS2000 which donated its 2.0-litre 16V engine, as well as its power steering and rear disc setup. The RS2000 ‘I4’ engine isn’t commonly tuned in the Ford scene, which is a shame as it’s a robust unit that can kick out over 200bhp when a pair of carbs, cams and a decent exhaust are added to the equation. Dirk had slightly bigger ideas though, and soon had a decompression plate fitted between the head and block to lower compression, in order to handle the turbo that was now sat on a home-made exhaust manifold. The turbo boosted through a home made intercooler and inlet manifold, and was tuned on DTA standalone management. Dirk admits that not only the end result, but his enjoyment of the development process, was the tipping point into an ever-increasing lust for power and speed. His attention had been well and truly turned away from the show scene, and onto the drag racing scene.

As the engine evolved from street blaster to quarter mile racer, the bodywork and interior also evolved from show car to something more serious, with all of the design and build crafted by Dirk’s own fair hands. The engine was forged, the bodywork received wide arches to take fat rubber and the interior was switched from luxurious beige leather to the Alcantara-clad Clubsport style cockpit you see in the pictures today, complete with bucket seats and a plethora of gauges. 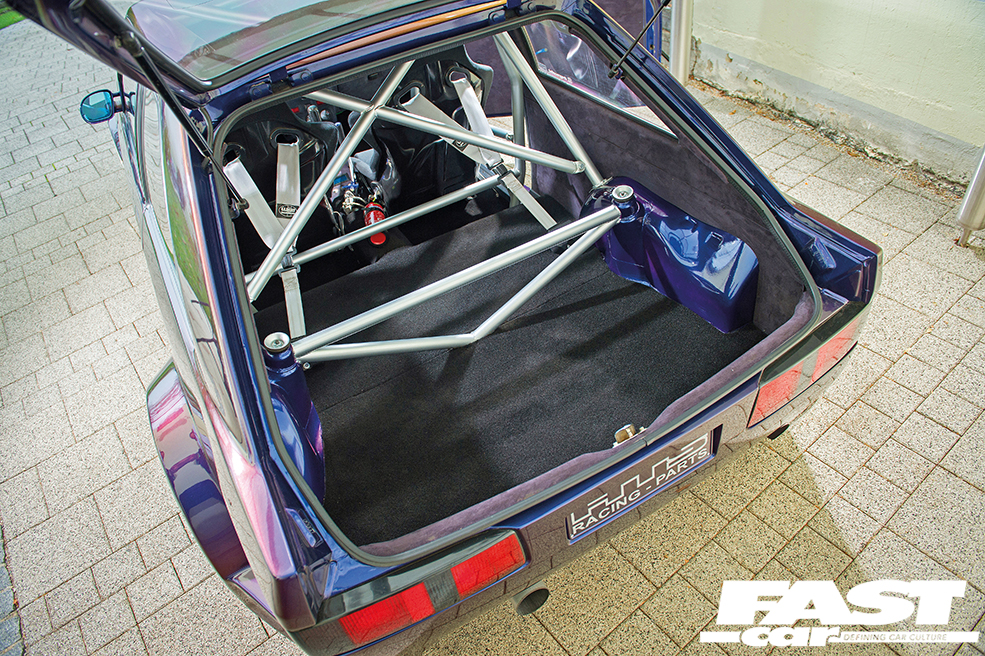 Some of you may love the looks, some of you may not, but one thing you can’t argue with is the level of workmanship and effort that has gone into it. Some of you may also agree that this kind of old school styling is currently making something of a comeback to the show scene – who remembers the wide arched Reiger Escorts and Astras, or the Dimma Renault 5 Turbos and 205‘s? Well, we’ve seen a few of these ‘nostalgia builds’ coming back and really blowing up the scene in the last couple of years so we have a feeling that Dirk’s Escort is so far back, that it’s way ahead!

Back to the story, and over time Dirk tweaked his Escort and driving style to end up running a best quarter mile time of 12.6 seconds. Even by 2020 standards that’s quick for a front wheel drive car, but back in 2015 it was really fast. However, it seemed that the potential of the I4 engine far outstripped that of the chassis. “The turbo was getting bigger and bigger, and the tuning was getting more and more effective,“ Dirk remembers, “we were on a Garrett GTX3076 by then and the traction was severely beginning to hold us back”. A long, cold German winter gave Dirk the time and space to hatch a plan, which centred around installing 4×4 running gear into the car… but the drivetrain came from an unsuspected source. “I researched lots of options, including Ford,” explains Dirk, “but the Ford ones weren’t very robust – lots of big power VWs and Audis were using the VAG four-wheel drive systems to good effect, so I decided on S3 parts”. 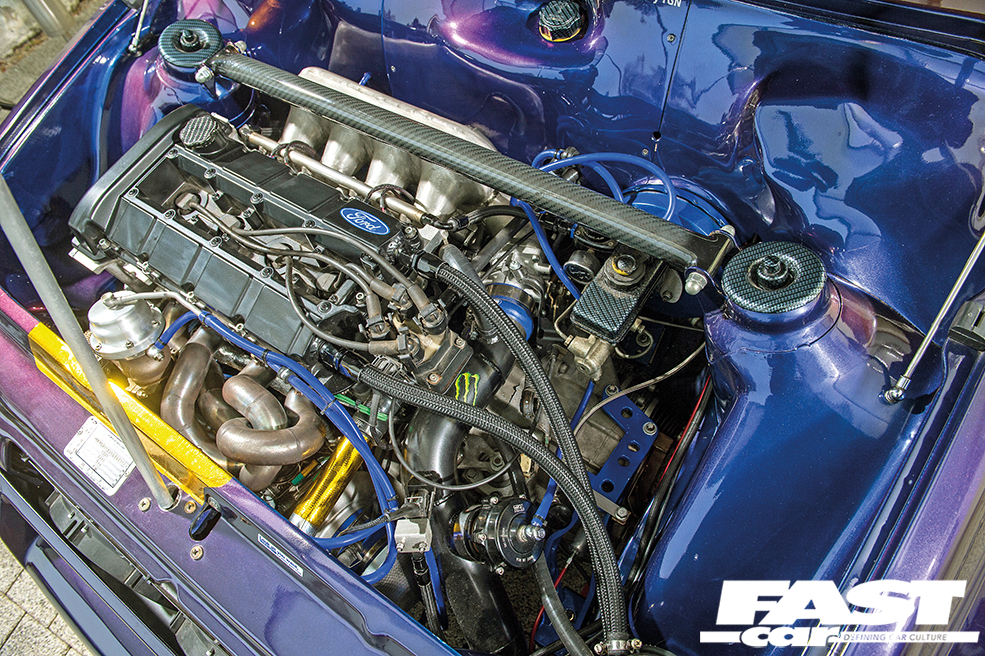 Unsurprisingly it took Dirk a lot of fabrication to mount the Audi beams, diffs and gearbox underneath the car, but for a man whose motto is, “it won’t work, does not exist”, it was only a matter of time before the whole lot was working, and working well. He ended up with what is a bulletproof drivetrain straight out of the factory, and enabled Dirk to make the most of an even bigger GTX3582 turbo and turn up the boost. “It is making over 620bhp and 550lb/ft now“ he smiles, “and last year I ran my best time of 9.836 seconds at a terminal speed of 144.9mph!”

That is a seriously impressive achievement, so it’s no surprise that Dirk’s spannering skills are being put to use not only by customers through his business HTS Racing Parts (on Facebook), but by his own family too. “My wife Doreen is also interested in tuning,” exclaims Dirk, “she has a tuned Escort convertible with RS2000 turbo power and my fourteen-year-old son Justin is building up a Honda Civic for drag racing at the moment…we are a car fanatic family so to say!” Indeed, the whole family travels to car shows and drag racing events with Dirk and they give him amazing support – he even proposed to Doreen at a Ford meeting on the event stage (and they say romance is dead!). In these days of online car parts and chequebook builds, it’s great that we still have such ingenuity, passion and individuality being passed down through the generations. It‘s lovely to see there are still mad Ford professors, beavering away in their garages and sheds and turning out completely one-off projects with ideas that are not only unique, but are devastatingly effective. All this, in what is still a streetable car which you don’t expect for one minute to have the ‘go’ to match the ‘show’! So if you’re a Veyron, P1, or LaFerrari driver and you pull up against a purple Escort with a ‘Bad Boy’ bonnet and M3 door mirrors don’t be fooled – as all is not always as it may seem…! 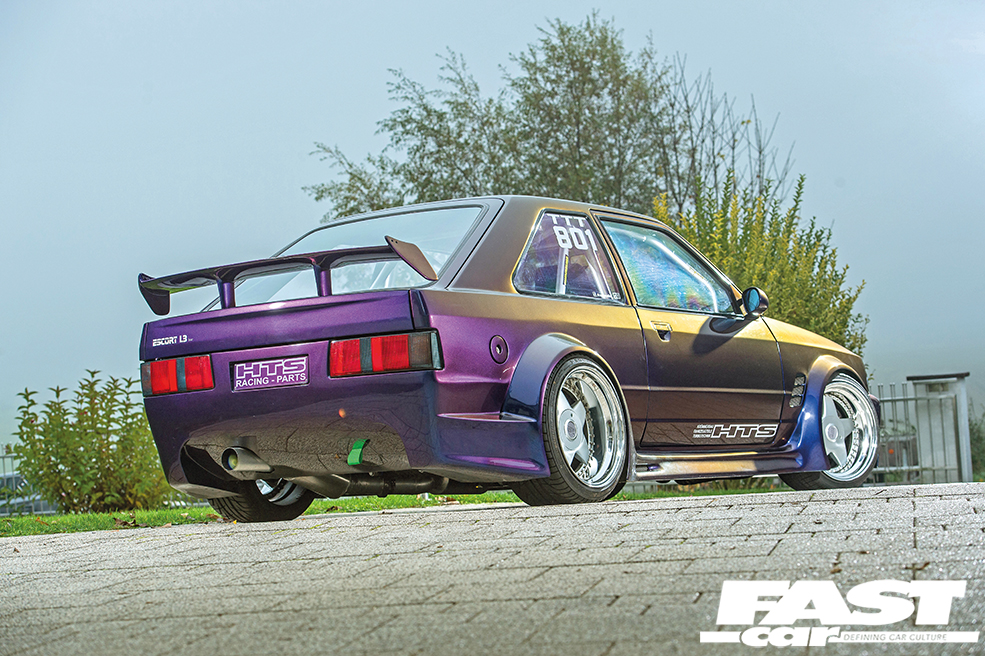