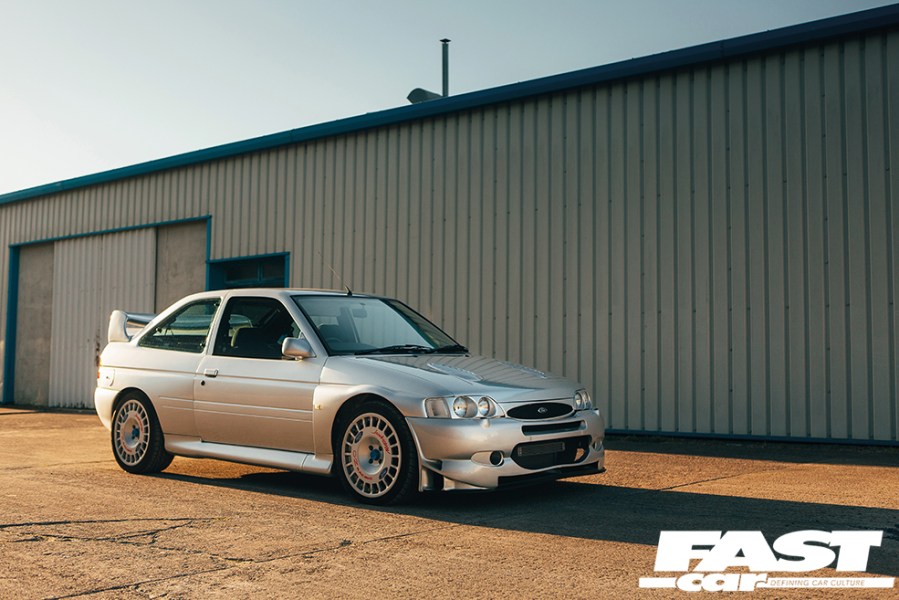 Jamie Kent’s silver dream machine appears at first glance to be a flawless Escort Cosworth converted to WRC body specs. But there’s a whole lot of smoke-and-mirrors going on here… Is that a V6?

There are things that we see in this world, and things that we don’t see. Sometimes things are deliberately hidden, sometimes we simply don’t notice what’s sitting right in front of us. We order a Friday night takeaway and don’t give a second thought to the moped rider’s horrible journey through the rain to deliver it; we leave our newspapers on train seats without wondering who’ll pick them up; we buy cheap milk in the supermarket without thinking about how the farmers are making any money. There’s always a story. Always something going on behind the scenes. Very little in life only exists superficially at the surface, beyond politics and daytime TV.

This Escort Cosworth is a case in point. If you were to see it out and about on the streets, you’d notice the aesthetic alterations immediately; the slippery silver form has been treated to the imposing smiley rear spoiler of the WRC Escorts in place of the iconic whaletail. The front wings and bumper are WRC items too, as are the stubby mirrors. It’s a strong look, as just 50 official WRC-spec Escorts were built between 1997-98, so it’s not like you’re always seeing them on the road. The comprehensive reworking of the Group A rally cars (which were, after all, the reason that the homologation-special Escort RS Cosworth road car existed in the first place) into the WRC-spec machines brought more power, better aero, and seismic chassis alterations. So when you see WRC aero addenda swapped onto a road car, a part of you tingles with anticipation thinking about what else might have been changed. 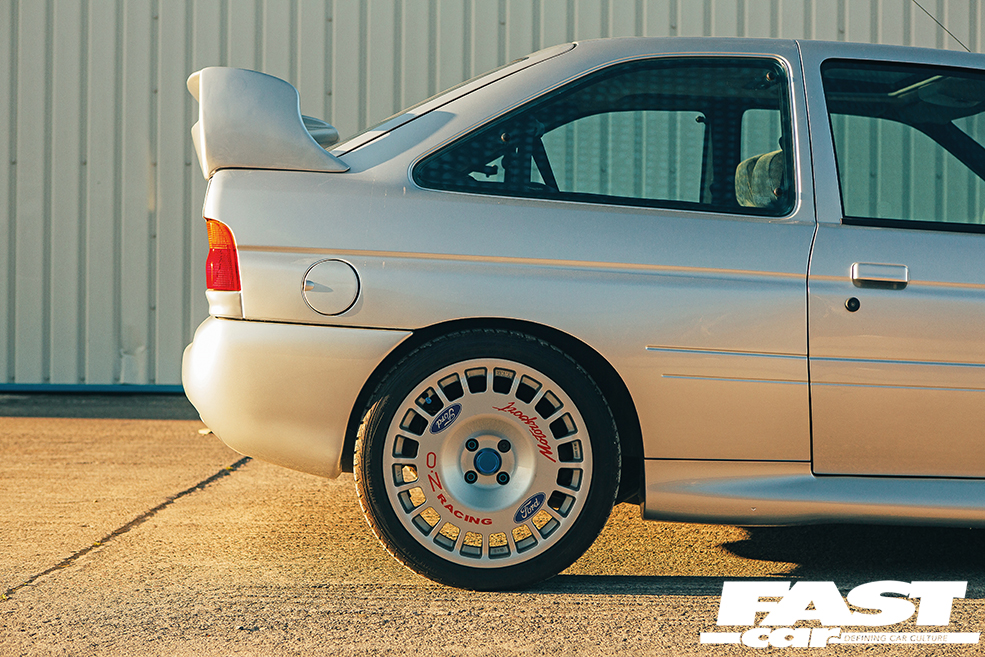 If you were to see this car parked up at a show, you’d be able to take a closer look – and that’s when alarm bells might start to ring. Peeking into the interior, there are two clues that all is not what it seems here. First of all, there’s the non-standard digital dash. And secondly, there’s the gearstick. It’s an automatic. That’s not right, is it?

Ah, but what’s ‘right’ is entirely context-bound, and it’s when you dig beneath the surface of this car’s story that you unearth the inherent and glorious rightness of it all. This isn’t merely a Cossie with WRC looks. This is a comprehensively re-engineered RS, built to suit the needs and lifestyle of the dyed-in-the-wool Ford enthusiast behind it. 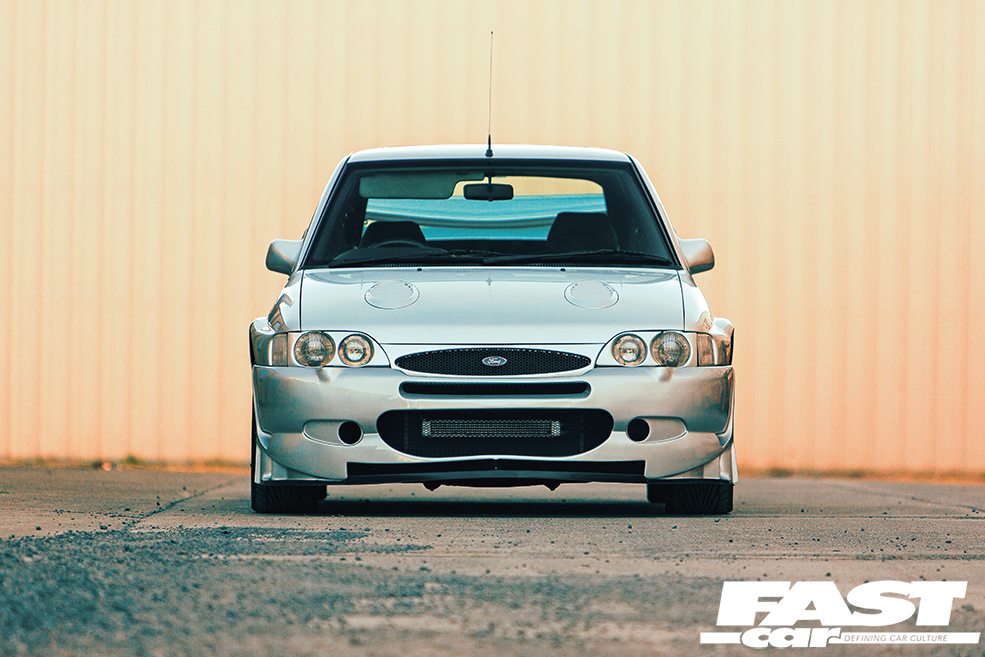 It all starts, back through the swirling mists of time, with a chap named Jamie Kent and a business by the name of Autograph. The former is the owner of this car, and also the proprietor of the latter — a signage company specialising in automotive applications and, specifically, motorsport graphics. Applying tidy new liveries to the latest WRC cars was Autograph’s bread-and-butter back in the day, and Jamie was the vivacious driving force behind it; it wasn’t just a job, he was involved up to the elbows in motorsport at every given opportunity, and his obsessive passion for Fords was all-consuming. Back in the late 1990s and early ’00s, criss-crossing Ireland in his black Escort RS Cosworth, Jamie was a man living his own personal fantasy: the Cossie was his dream car, something he’d promised himself he’d own by the time he was 25 and, a few weeks before that milestone, he was able to make that dream come true. Fate, however, has a cruel sense of humour. Eighteen months into RS ownership, Jamie made the difficult decision to sell his dream car in order to grow his increasingly successful and demanding business. That’s not fate though, is it? That’s just rational business sense, heartbreaking though it is. No, fate’s intervention came during a national rally event, when our man was navigating, and the car was involved in a substantial accident. It was touch-and-go, and things were looking distinctly murky for Jamie throughout his lengthy and troubled recovery, but he’s a battler. While there was talk at the time of how he might not even make it, he pushed on through and came out the other side with fresh perspective and an eagerness to crack on with life.

There was just one problem: the accident had rendered him unable to drive a manual transmission car — from this point on, it was an automatic  only.

Lesser people might have thrown in the towel at this point, settling for an automatic Micra and just giving up. But not Jamie. He knew what his dream car was, and he wasn’t about to let this setback slow him down. And he had a plan.

Now, if your eyes have scanned ahead to the engine bay shots, you’ll have already seen that this Escort now runs a V6 motor. And as a diehard Ford fan, you can be sure that Jamie agonised endlessly about ripping out the YB and replacing it, questioning how he could rationally justify it, but it was all part of the bigger picture. You see, an automatic gearbox was required, and the BOB V6s sit neatly with the auto trans, and Jamie had discovered something fascinating: back in the mid-1990s, Ford had experimented with a rear-wheel-drive V6 Escort prototype — an Escort Cosworth chassis with Scorpio Cosworth running gear (see boxout). So that, essentially, is what he sought to recreate. 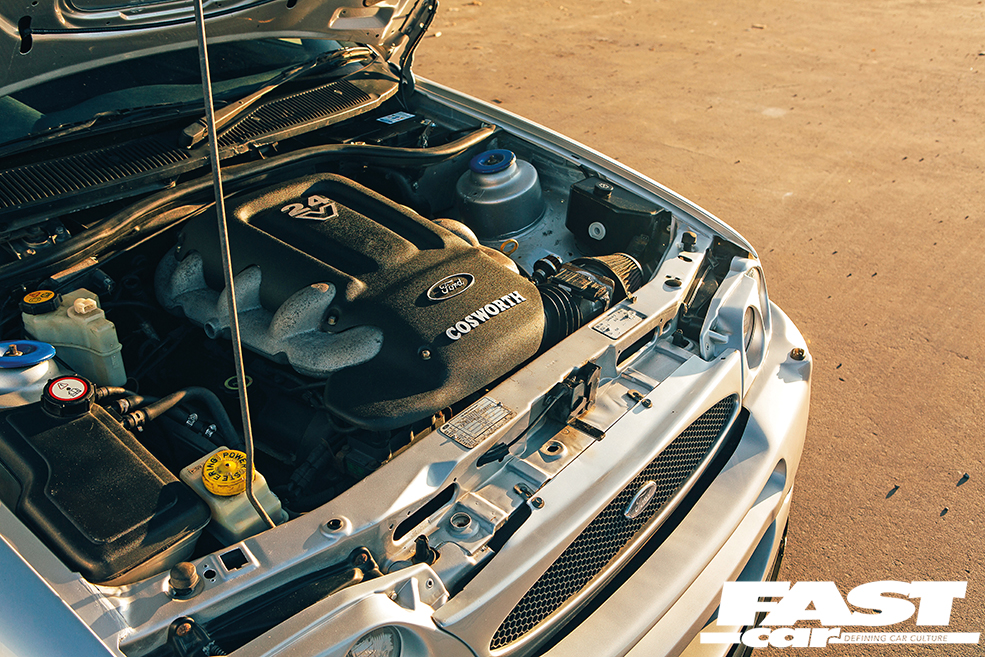 Not sacrilegious then, but a faithful tribute to a Ford prototype, made with all-Ford parts. It’s still a real mover too; while the BOB is about 15 bhp down on the YB, there isn’t a complex 4WD system to run through so it actually tallies up around the same at peak and, crucially, he’s actually able to drive it thanks to that self-shifting transmission!

If you comb through the build, you’ll find a remarkable dedication to keeping everything just as it would have been if Ford themselves had built this car. That original prototype played to the Escort Cosworth’s strengths while also fundamentally altering its character, and this usable tribute employs only genuine Ford parts throughout; in fact, the only part you’re likely to find without a Blue Oval serial number is that digital dash, and that’s only because the YB has a mechanical speedo and the BOB and its gearbox have electrical sensors. In essence, this is the rear-drive, V6-powered Escort RS Cosworth that Ford never built. Or, more specifically, that they built once but abandoned. Jamie’s taken that idea, made it into a daily-driven reality, and at the same time made his own dream car achievable in the face of great adversity.

So yes, there’s always something going on beneath the surface. And while the cynics may scoff at the idea of converting a genuine Cossie to RWD and sticking a V6 and an autobox in there, they don’t know the full story. This isn’t sacrilege. This is a dream come true. 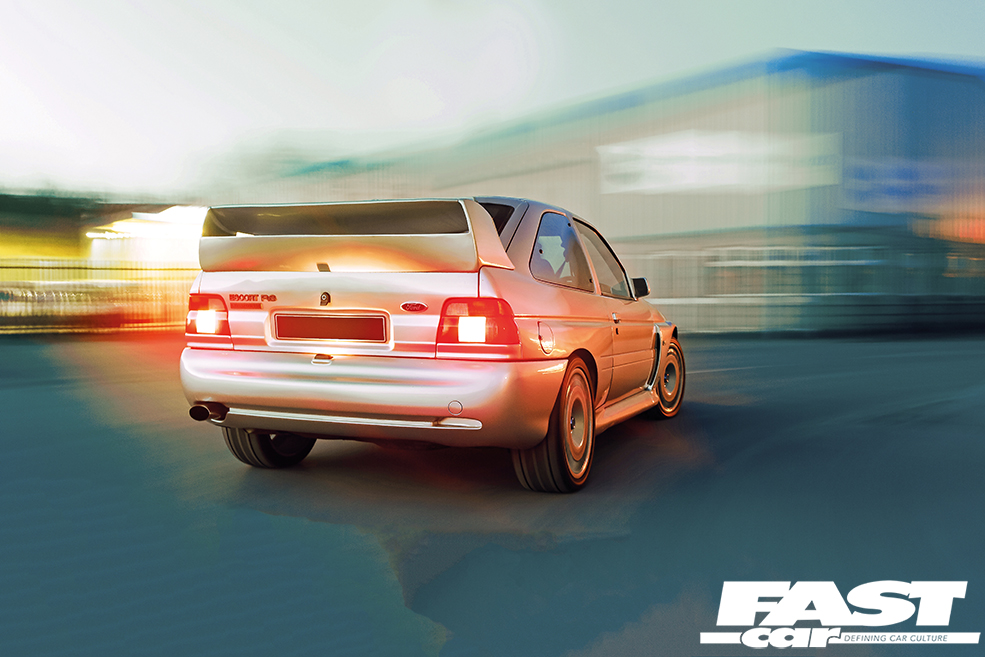