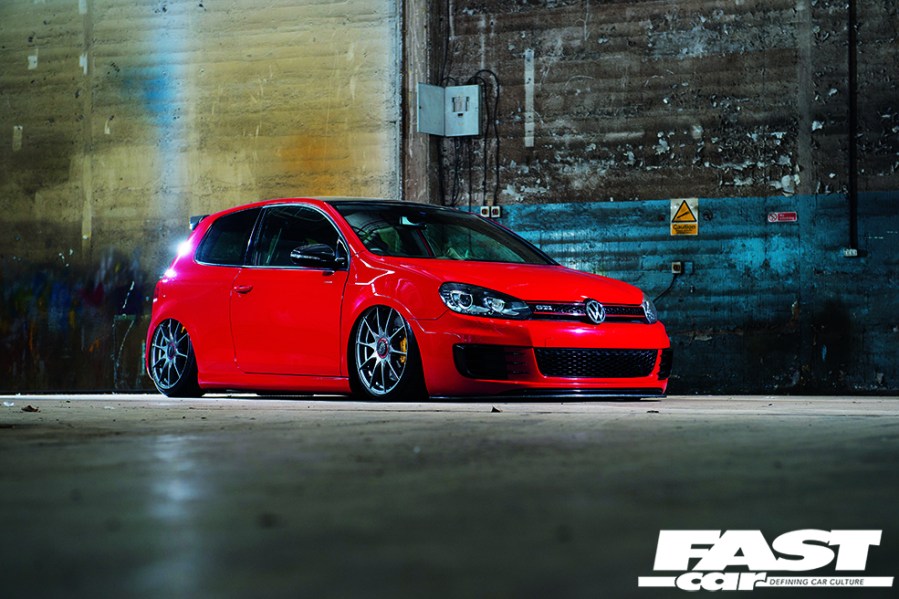 Take one Mk6 GTI, mix in a set of wheels, a pinch of air ride and just a little drizzle of body mods. Take one fresh interior, throw in a dash of audio and bake at a medium heat before leaving to cool the night before a show. Et voila, Phil Eccles’ recipe for a delicious sixth-gen GTI.

H ow did you first get interested in modified VWs? It’s a question we always ask the owner of a car when we’re writing a feature, after all it’s never not interesting to learn what got someone first involved in this silly little world of ours. Maybe it was an older sibling, or their friends. Maybe you lived down the road from a spot the local car kids used to hang out at, or maybe you found a copy of PVW rolled up in a hedge somewhere on your walk to work, who knows. Me personally? It was buying a copy of Max Power in 1995 and falling in love with the orange Skeete-kitted Mk2 on the cover. I also vividly remember flicking through a different copy of Max Power (seriously, that mag did more for the UK car scene than any of us give it credit for!) in a geography class in the late ‘90s and arguing with my friends that the small dished wheels fitted to a Mk1 featured within its covers were cooler than the big 18s or whatever they were fitted to the Skyline they preferred. I can’t remember what I did last week but I remember that, the brain is weird isn’t it? I would say those were my pivotal moments, the two moments that eventually led to a bunch of silly cars, a bunch of debt, the job on PVW back in 2007 and a whole bunch of new friends too. Ah memories… and I never did that well in geography, surprisingly…

As it happens, Carlisle lad Phil Eccles here got in to VWs quite by accident… quite literally in fact. “I had a Clio as my first car, you know, stupid loud exhaust, daft intake, wheels and springs, you know the sort,” he started off. “My mate wrote it off for me which was nice and I ended up buying my parent’s Polo 9N TDI (that they had owned since new) off them for cheap. Soon as I started driving it and looking in to the scene more the VW bug just got me bad.” Phil also says he started buying PVW around this time too, which was great for our sales figures six or so years back but quite bad for Phil as the mag, like it’s done to so many people over the years, led him down the dark and bank account-punishing world of VW modifying. Maybe PVW should come with a disclaimer on the front cover. ‘We are not responsible for the financial decisions you make after reading this title’, something like that anyway.

“I did a bit better with the Polo,” Phil smiled, “I put cheap coilovers on it, wound all the way down of course so the ride was awful, TT Comp wheels, an exhaust and a cheap plug and play chip box, little bits and pieces,” he continued. “I quickly realised that diesel wasn’t for me though so sold that Polo and bought myself a Polo 9N3 GTI instead.”

The pocket-sized GTI turned into a full-sized project for Phil, who spends his nine to five to fund his car habit as a HGV Technician. The car came with a few mods already, but it soon spiraled into a hybrid turbo’d weapon. “It made 260bhp and 281lb ft, which might not sound like much but in a wee Polo it didn’t hang about that’s for sure,” he remembered fondly.

Soon though it was time to move on and like most people, Phil found himself looking up the VW model ladder. “I started searching for a Mk6 GTI,” he remembered. “It had to be white or red, in three-door with less than 40k on the clock and it had to be as straight as possible. Then this one popped up on Pistonheads as a private sale. When I spoke to the guy on the phone he said if I came and looked at it and could find one single fault with it he would pay what it had cost me to come view it as it was three hours away,” Phil continued. “He wasn’t lying, it was absolutely mint which was a bit of a bugger because I couldn’t find anything to try and knock him down on the price,” he laughed.

It might have taken our Phil here a little while to track down the perfect car but while he was searching for the ideal base car he hadn’t been wasting time. “I had the air, a full turbo-back exhaust, an intake and a big intercooler bought and sitting in my spare room way before I found the car,” he laughed. “So yeah, I was always planning on modifying it! But I didn’t think it would go this far, I never thought it would end up getting in a magazine or winning me trophies at shows either!”

With a pile of pretty parts in his spare room it was obvious that Phil wasn’t going to be hanging around and hang around he didn’t. He picked the car up from the seller on a Saturday and just seven days later him and a friend were fitting the air up under the Mk6’s arches. Phil opted for the tried and tested Air Lift Slam Series and V2 management combo, coupled with a pair of specially shortened rear shocks, the removal of the car’s front anti-roll bar and some jiggery-pokery with some brackets down below to get the car to sit a few millimetres lower.

Of course air is nothing without the right set of wheels to pull the tyre-tucking look off, and Phil hasn’t let the side down there by opting for a timeless set of OZ Formula HLT wheels in 9×19” flavour and a tuck-friendly offset. Behind them sits a pretty serious OEM brake upgrade, so it’s just as well that OZ Formula HLTs leave lots of space behind their spokes to play with. Up front sits a pair of TT-RS calipers and matching 370mm discs, while out back you will see a pair of 330mm discs gripped by four-pot calipers and the separate handbrake caliper setup lifted from an Audi R8.

The increase in stopping power is not without merit though, Phil hasn’t forgotten the under bonnet goings on when creating his perfect sixth-gen GTI. The 2.0-litre TSI is fed nice cool air by an EVOMS intake, Forge Motorsport turbo inlet and outlet pipes and THS intercooler, while the spent gasses are dealt with by a 3” BCS Powervalve exhaust and 3” decat pipe. R8 coilpacks and a pair of Forge dress-up caps finish the engine bay mods nicely. Last but not least, a custom Stage 2 map by Auto-Tec in Port Glasgow ensures everything is working to its full potential with the bolt-ons.

“I like the power it’s got now, it always puts a smile on my face and it definitely holds its own against most things,” he smiled, before adding “although if I had to change one thing on it now it would definitely be a bigger turbo, you can’t have enough power can you?”

The Mk6’s bodywork is where a lot of time and effort has been spent, although at first you might not spot everything that’s been done. The front wings are SRS-TEC widened jobbies, the side skirts are Edition 35/Mk6 R examples and the front fog grilles are SRS fog-delete items. The front end has also lost the number plate recess and gained a pair of Edition 35 headlights, while the rear end sports Mk6 R rear lights and has lost its wiper. The final touches are the OSIR carbon fibre rear spoiler, rear diffuser and wing mirrors and the matching Kerscher carbon fibre front splitter. “The car’s had a partial respray in the original Tornado red and we wrapped the roof gloss black for a bit of contrast,” Phil explained. “All the work was carried out by me and my good friend Iain at Evolution Paintworks in Carlisle.”

The final piece of the puzzle was the interior, and what a nice interior it is too. The GTI’s stock front seats have been replaced by a pair of, what else, Recaro CS buckets with the back pieces painted satin black. The CS’ have had their centres trimmed in the Mk6’s original plaid cloth by Optimus Trimmers in Glasgow which is always a great look in our book, while the rear seats have been consigned to the garage floor in place of a false floor setup and custom made cage and harness strut bar, the latter both painted in a really nice subtle colour called Evolution grey. The back end isn’t just an expanse of nothingness now the rear seats are gone though, look beyond the menacingly thick harness bar and you will see a pair of seamless air-tanks and a square Kicker sub sunken into the beautifully carpeted false floor.

“I think my best and worst moments of the whole build was all focussed on getting the interior in and the car finished for Ultimate Dubs last year,” he smiled. “We were working late in to the night getting the interior all back in and the car finished off before the show, but the lads got stuck in with me and we got it done,” he continued. “At the show I got so many comments on the seats, loads of people thought they were a factory option from something which is the look I was going for so I was really pleased,” he added.

So what’s next for Phil and his take on the ultimate Mk6 GTI? “I’m going to change the wheels for this year’s shows and probably give the brakes a colour change too,” Phil explained. “Then hopefully, if all goes well, I want to get the clutch upgraded and source a different bigger turbo and aim for around 400bhp, that’s my goal. My next car will be a big noisy RS4 V8, although I’m a bit obsessed with the Mercedes A45 AMG at the minute too. As for mods, whatever it will be will 100% modified,” he said. “I don’t think I will ever leave a car totally stock for as long as I live, once the bug has bitten you it’s got to be done…”

As is the case with most of us who spend far too much time and money on our cars, Phil’s come up against some non-believing friends and family over the years who don’t suffer the affliction of being in to modified VWs.

“I actually get the whole ‘why do you spend so much on your car, you won’t get it back, etc’ thing a lot but to me it’s always worth it. It’s my hobby, some people spend money on going to watch football and so on, I spend it on cars and weekends away with my mates mostly getting pissed and having a laugh and meeting some of the most amazing people through cars.

We’ve been all over the UK and Europe to some amazing places and shows, so for me that’s what it’s all about.”

That’s the kind of attitude we dig Phil. It doesn’t matter how you got here, what’s important doesn’t change, having fun with like-minded friends first and cars second is what it’s all about after all.