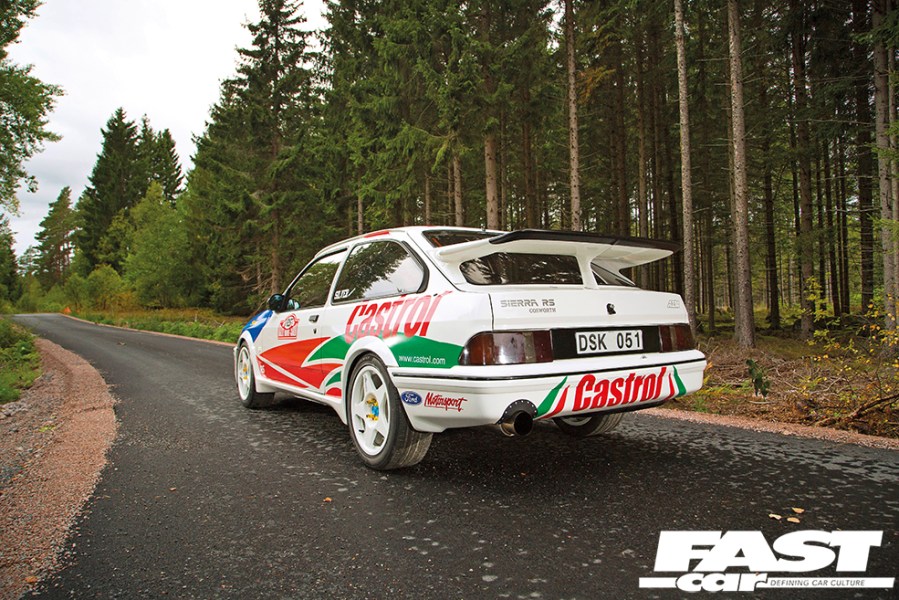 We take a look back at some of the epic features that graced the pages of our sister title Fast Ford magazine. This time it’s Pontus’ Sierra RS Cosworth from 2018.

If you wanted to make a killing in classic car investment, you’d do well to find yourself a whaletail Cossie. But where’s the fun in having a fast car and not using it? Pontus Eriksson has a different approach, balletically pirouetting his ice-white Sierra through the frosty forests of Sweden…

This, of course, leaves the fast Ford fan in a tricky position. Should you find yourself lucky enough to own such a thing nowadays, do you mothball it in a heated garage in the hope that it’ll pay for your retirement, or do you just shrug it all off and have some fun?The idea of modifying an original whaletail-toting Sierra RS Cosworth is an increasingly tricky one to grapple with. After all, the values of old-school Fords have been galloping on apace, and these iconic road-racers – which were once relatively affordable performance machines to thrash around in – have firmly and finally passed into the pantheon of the blue-chip investor car. Whereas it used to be the norm to wind up a Cossie’s boost and see how far it went before it popped, or to try to outrun the rozzers after some racy derring-do (so we understand, from old episodes of Police, Camera, Action), it’s now the case that complete, original Cosworths are being snapped up at top-dollar prices by speculators who have no intention of driving them so fiercely (or at all!) and plan simply to watch their investment grow.

Thankfully, for most enthusiasts, the answer is the latter, and Sweden’s Pontus Eriksson is an owner with his cross scrawled firmly next to the ‘fun’ party. Originality be damned, this thing was built for one thing and one thing only: going really rather fast.

“My original plan was to build a fast car for using on track days, that was also a road car, and something fun to drive to work on Fridays,” he recalls. “I bought the Cosworth back in October 2011 – a friend of mine spotted it for sale on blocket.se [Sweden’s largest online marketplace] in a town just outside Västerås – about 100km from my hometown of Uppsala. It was in good overall condition and rust-free; it was being used as a daily driver by its owner at the time, who’d tuned it up to around 400bhp with a bigger turbo and a remap.”

So here’s a question we always ask: ‘What was the first thing you did to the car?’ – and given that it was a solid, rust-free daily driver, the answer took us aback somewhat. “I completely rebuilt the whole car, inside and out,” Pontus shrugs.

Oh right, simple as that eh? It’s those Scandinavian winters, we reckon – they spend so much time with it being cold and dark outside, these tuners are driven into their garages and they start getting funny ideas. They have more than enough time to get stuck into their projects too, ready to emerge anew when the spring flowers start to bloom.

OK, so it wasn’t exactly a case of Pontus buying it, driving it home and immediately dismantling it, although it wasn’t all that far off. “The clutch didn’t really work so I needed to rebuild that,” he reasons, “and then in April 2012 I drove the car about five-hundred kilometres and the whole engine just fell to pieces.” This, essentially, was the turning point in the decision-making process, and the catalyst for the full rebuild that was to follow. Pontus is keen to point out that near-enough every single element of the engine has been modified to suit his tastes – indeed, it’s basically only the starter motor that remains factory-standard – and it all centres around a 200 block. “It’s stronger than the YB’s 205 block,” he explains, and if your eyes have flicked over to the spec box and the engine bay shots, you’ll have noticed that there’s quite a lot else going on in there. Chief among the upgrades is the Holset turbo; a name usually associated with trucks and trains, it’s a punchy move to bolt one to your car, and Pontus’s unit is rocking a Tial 44mm wastegate and PPF 50mm dump valve, working in conjunction with a Forge intercooler. Moving inside that sturdy block, we find CP pistons and Auto Verdi rods, with the top end boasting a custom cam setup and uprated valvetrain. The whole shooting match is overseen by Vi-PEC V44 management, which features launch control and – Pontus’s favourite feature of the whole setup – anti-lag. That’s right, it’s a Touring Car and a rally car all in one!

The purist collectors will be further horrified when they learn what the irrepressible Pontus has done with the gearbox. “It’s gone,” he says, matter-of-factly. “In its place I’ve fitted the ZF gearbox from an E36 BMW M3. I chose that one because it’s strong, and it’s also easier to shift at high revs – say about 8,000rpm – although, to be honest, the BMW gearbox isn’t perfect. I’ve already broken six of them…”

Yep, that’s what 577bhp and a heavy right foot can leave you with, particularly since Pontus’s means of giving the car a hard time extend beyond the commute and the track and into the hair-raising territory of ice-racing on skinny studded tyres. This car takes a lot of abuse, which is exactly what it was built for.

Given its various roles and chameleonic adaptation to diverse purposes, the chassis has been very thoughtfully considered in its upgrades. “The front brakes are 342mm Brembos from a Mk1 Focus RS,” he says, “and the rears have been converted to 4×4 Sapphire RS Cosworth discs. In terms of suspension, I opted for GAZ Gold coilovers, slightly modified the front axle with a strut kit and uniballs, and modified the rear with aluminium bushings, adjustable wheel angle, toe and camber.” It’s all very proper, every move a right one, and the interior befits a machine of such functionality: the obligatory full rollcage, naturally, as well as lightweight fibreglass bucket seats from Polish specialists Jacky Auto Sport, relocated battery to help with the weight distribution and, because things do sometimes like to surprise you, that all-important fire extinguisher system too.

Of course, it’s not all about the function. You can essentially take any car and make it quick, within reason – the form is equally important, and that’s why Pontus chose a whaletail Cossie in the first place. The aesthetics are just bang on-point: Diamond White shell, custom retro Castrol livery, plus a Compomotive MO5 at each corner. You don’t need to over-egg the pudding with a Cossie, they’re already adept at rewriting rulebooks, and the combination of unusual livery and super cleanliness here is what really pushes this build into the pantheon of greats. It’s got the go, it’s got the show, and it’s got a spec list to die for.

“Since I bought it, I’ve probably spent around £17,000 on upgrades,” Pontus ponders, “and it’s never off the road for long! I’ve been using it regularly since I bought it, and every winter I make upgrades. Next winter I think I’ll be swapping in a stronger race-spec dog ’box, and maybe a new Gripper diff. I just love the performance of it now though, it’s addictive – I’ve had a GPS-verified 155mph but I wasn’t pushing it, it can go much faster; it’ll run a quarter-mile in 11.24 seconds, and on the rally tyres with 8mm studs I can drive it on frozen lakes too!”

It really does sound like it can do anything, doesn’t it? It could probably even handle the weekly shop, if you tied the carrier bags to the rollcage. What Pontus has created here is fast, unique, capable in a broad range of scenarios, and most of all something that was built to be used. All of those mothballing collectors can be as smug as they like with their hermetically sealed investments, but they’re not grinning as much as Pontus!