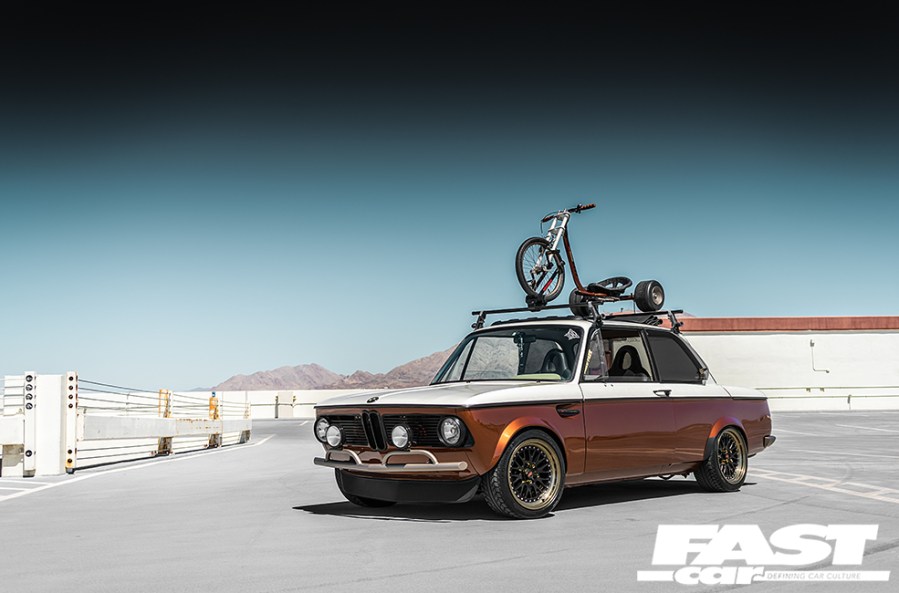 Putting an S2000 engine in a 2002 might divide opinion, but this fully-customised S2000 2002 is an absolute riot and impossible not to love.

There are going to be some of you reading this right now who really aren’t going to get on with this car and that’s ﬁne, we totally get why you’re not happy about this, one man’s meat is another man’s poison and all that. But, if you can’t enjoy it then can you at least respect what Dan Melchner has done here and admire the work he’s put into it, because there’s an absolute boatload of that? If you can’t, best move on to another feature then but the rest of us need to just take a moment to enjoy this 2002 because it’s so good, so very good. Just look at it, it’s absolutely awesome, completely outrageous and unequivocally fantastic with it. You know what this car is? It’s fun. It’s all about building the car you want to build, doing what you want to do and in many ways it is the very embodiment of what the modiﬁed scene is – or certainly should be – about. It’s not about making other people happy, it’s not about building the car that other people think you should build or want you to build, it’s about building for you because that’s the most important thing. Build the car that you know that you want to build, in your heart, and you’re going to have such a good time.

Dan and his 2002 live in California and this is exactly the kind of car that works out there, basking in the sunshine, and it absolutely has the sort of laid-back, carefree vibe about it that you usually associate with The Golden State. It’s been built to an incredibly high standard, that’s obvious from the moment you look at it, and what’s all the more impressive is that this is Dan’s ﬁrst ever BMW, not that he’s a stranger to modifying, mind. “I believe I have modiﬁed everything I have ever owned,” he says, before running through a list of Japanese machinery: 1977 Toyota Corolla – his ﬁrst car – then a Suzuki Samurai, Mazda MX-6 and a Toyota 4×4, all given the wheels, suspension and custom stereo treatment but, as you can clearly see, this 2002 is different to everything that has come before. Aside from being one of Bavaria’s best, it’s also an incredibly comprehensive build, without doubt Dan’s biggest to date and his most spectacular.

“The 2002 is one of my favourite BMWs and this model is becoming very rare and increasing in value,” Dan tells us. “It is also a classic; in addition, I like classic cars. I found the car in Wheatland, California. It was in desperate need of complete restoration, but the car was unmolested and complete, meaning it has never been in an accident, and all the parts were on it. It was a complete vehicle. I disassembled the entire car and performed a complete restoration from the ground up,” after which he proceeded to modify the pants off it, which was always part of his plan, except it wasn’t just modding, it was full customisation and it’s mission accomplished on that front.

With Dan’s extensive bodywork restoration came the comprehensive transformation of this 2002’s styling and there’s so much to take in and enjoy here. We absolutely love the two-tone paint, so unconventional and unusual but the 2002’s design lends itself perfectly to splitting top and bottom halves; the combination of Pear White and Root Beer Brown makes the car itself look like a frothy beverage and that brown is just so rich and luscious and absolutely comes alive in the California sun. There’s a lot more than just the paint that sets this 2002 apart from the crowed and everywhere you look you unearth yet more hidden design touches. The moulded wheel arch ﬂares give the diminutive ’02 a pumped-up look while the carbon E9x M3 wing vents and side repeaters work better than they really have any right to and blend perfectly with the rest of the car’s styling. Beneath the roof-mounted, colour-matched two-tone trike you can just spot the sliding roof that’s been installed and sitting between the white top and brown bottom is a carbon trim strip with further carbon detailing on the bonnet roundel and rear panel. We also love that front bumper bar, complete with spot lights, which just ﬁnishes the whole exterior off.

The interior, meanwhile, is an absolute riot and the amount of work that’s gone into it is absolutely mind-blowing. Everything in here is either completely custom or has been transplanted from the S2000 that gave its engine for this project and it all works incredibly well and looks absolutely fantastic. What you immediately notice is that wild leather and the dash, door panels and rear side panels have all been covered in ostrich leather. Yup, genuine ostrich leather, which has been given the same two-tone treatment as the paintwork. Up front you’ll ﬁnd S2000 seats that have been re-trimmed in black leather while in the back are a pair of custom bucket seats from an E24 635CSi, also trimmed in fresh black hide and new black carpets have been ﬁtted throughout. The carbon and perforated leather steering wheel carries over the carbon theme into the interior while the S2000’s digi-dash is framed by carbon and pale ostrich leather in a custom pod, complete with engine start button. For such a small interior, the amount of work that’s gone into it is amazing and the results are really astonishing, and that’s something you can’t argue with regardless of your stance on ostrich leather. Even the boot ﬂoor has been trimmed in pale ostrich leather while the boot-mounted rear brace and battery cage has been ﬁnished in Root Beer Brown; that’s the level of attention to detail that has been lavished upon this build and it really helps elevate it to the next level.

Up to now we can’t imagine you haven’t been enjoying this build but now we reach what might well be the bone of contention, that being what you’ll ﬁnd lurking beneath the white bonnet, within that immaculately-ﬁnished, Root Beer Brown engine bay. “My engine choice was to use a Honda S2000 F20C with the matching Honda six-speed manual transmission,” says Dan. “I had access to the parts to perform this conversion, that is partly why I chose to do it. Also I intend to add a turbo soon which will help this engine produce in excess of 350hp and the parts are readily available and somewhat affordable,” he adds, which will be nice. Or rather nicer, we should say, because even with the almost entirely stock F20C four-cylinder engine mounted up front, Dan still gets to enjoy 237hp and an 8800rpm redline, which must make driving this ﬁrecracker of a 2002 an awesome experience. The engine bay itself is gorgeous, with minimal clutter to really show off that alien power plant, with its tubular exhaust manifold and intricate custom air intake piping.

Of course, while the engine swap itself is extremely impressive, going by the rest of this build you know that Dan couldn’t simply have left it at that and the chassis has also been attended to, ensuring he’s got the whole package to enjoy because this car is most deﬁnitely not all about looks. On the suspension front you will ﬁnd a combination of Bilstein shocks and sport lowering springs, which deliver a pretty serious drop and get those fat little arches hunkered right down over the tyres to great effect. The wheels are AV-12s by Avid 1, 8x16s all-round ﬁnished in two-tone black and bronze and it’s a colour combo that works really well with the car’s paintwork and a design that suits it perfectly, the classic cross-spoke look working so well here. But that’s not all; peer through their tight mesh and you might just spot the beefy Wilwood calipers that have been ﬁtted all-round lurking behind the wheels, complete with drilled discs, endowing this pocket rocket with some seriously impressive stopping power. We weren’t kidding when we said this 2002 is the complete package.

It almost seems an injustice to squeeze so much work and effort – seven years’ worth, no less – into just one brief magazine feature. This is the sort of build that doesn’t come about very often, it’s a real treat, and not just because it’s so comprehensive and Dan’s been so thorough and meticulous at every stage, putting in so much attention to detail. It’s because so much time has been spent on it, the greatest luxury of all, and he went in with no budgetary restrictions, which is rare even for some of the cars we feature. To be able to build a car and say that you’ve done absolutely everything you wanted to, exactly as you wanted, is an amazing feeling and the resulting builds are never anything less than utterly spectacular, as is the case here. Sure, it won’t be for everyone, but if you’re openminded enough to be able to appreciate a build like this, it’s the sort of car that will just put a smile on your face. As the slogan for a similarly two-toned alcoholic beverage goes, good things come to those who wait, and Dan and his delicious 2002 are living proof of that.