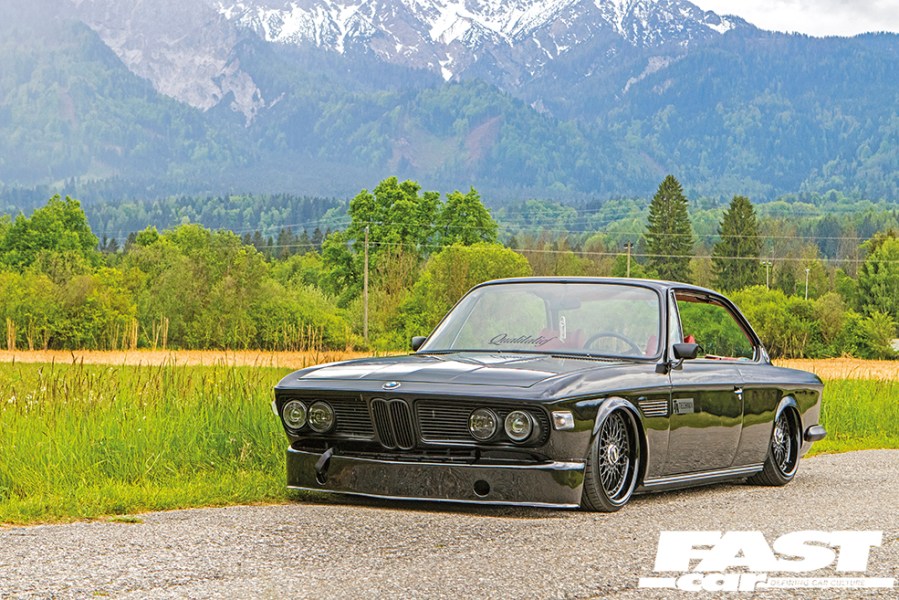 Just because a car’s obscure, that doesn’t make it untouchable. And anyone who has beef with the idea of modifying a rare classic would do well to take a lesson from Alexander Steffen: he built this menacing low-down BMW E9 3.0 cruiser to fulfil a long-held dream, and there are few stronger justifications than that…

Rarity and obscurity are two of the most precious and cherished commodities in the car modifying scene. We all know the heady thrill of tracking down an unusual period OEM optional accessory in new-old-stock condition, or rolling into a show on a freshly-built and unique set of wheels, or achieving a paint finish hitherto never seen… whether you’ve experienced such things yourself or simply appreciate the effort (and sometimes luck) involved, it’s a broadly enjoyed state of affairs. No one wants to build a car the same as everyone else’s, everybody wants to find or create that unique hook.

When it comes to the BMW E9 coupés, obscurity is baked right in from the start. For most car enthusiasts, knowledge of this model begins and ends with the 3.0 CSL – the so-called ‘Batmobile’, hero of early-1970s Touring Car racing and trailblazing proponent of functional aerodynamics and extreme weight-saving on road cars in the sphere of the homologation special. Of course, there’s more to the E9 oeuvre than just the motorsport halo model, although it has to be said that this pretty and classically styled coupé was never exactly a unit-shifting volume seller. In a production run that spanned 1968-75, around 30,500 of these cars were built, and that’s the global figure; 1365 of these were CSLs, representing under 5% of the total, with the rest ranging through various spec iterations of the 2800, 3.0 CS and 3.0 CSi. 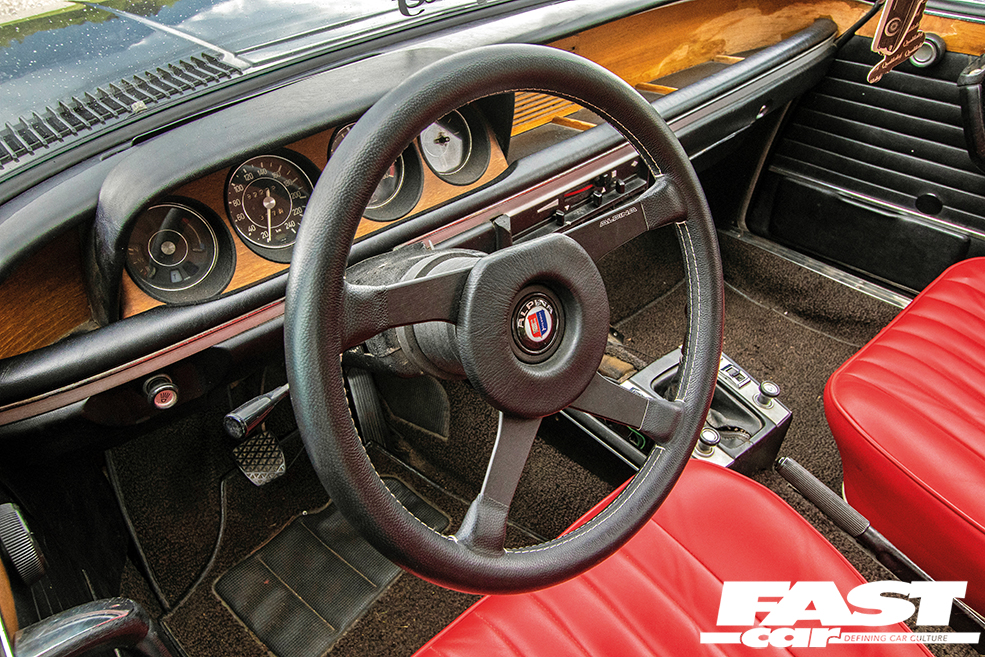 The blacked-out bruiser we have with us today is a BMW E9 3.0 CS, a 1971 model, and this brings with it its own frisson of artistic tension. With fewer than 4500 of these cars ever built in CS spec (and rather a lot less than that surviving today), is there an argument to be made for leaving well alone when it comes to altering, modding and generally changing things? Put simply, does rarity equate to untouchability?

In short, no. Of course it doesn’t. Life’s too short to worry about appeasing the sort of internet nincompoops who tell you that you’ve ‘ruined’ a rare car by inarguably making it infinitely cooler, and we reckon you’d struggle to find many people who wouldn’t agree that what Alexander Steffen has achieved with this E9 is downright spectacular. All of this is the result of years and years of ingrained enthusiasm for anything with an engine – and, crucially, a keenness to take such machines and rework them to make them more interesting. “It all started with 50cc bikes when I was 15,” he recalls. “I modified them a lot, as they had easy two-stroke engines and I did my best to make them as fast as possible; before long I moved up to 125cc bikes, and then went over to four wheels with a Mk4 Golf. This was my first car, which ended up very low over 18” wheels, with an R-Line body kit – all two years before I was old enough to even drive it!” 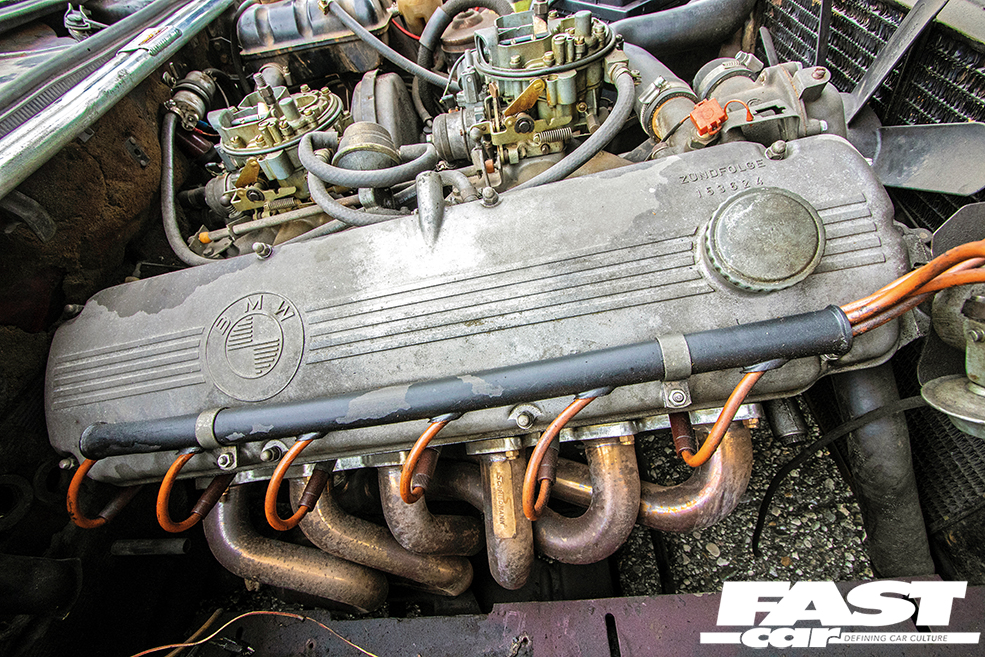 It’s safe to say this passion for reimagining machinery is fairly deeply entrenched in Alexander’s affections then and, with a growing self-taught skill set, he always had a clear idea of what he wanted to and was able to achieve. And it was a chance meeting with the aforementioned homologation-special CSL that sparked the desire to create the low-slung vision you see before you today. “I knew I had to buy an E9 one day, after I saw a CSL Batmobile sitting in a petrol station, with all its crazy spoilers and so on,” he recalls. “At that point, however, I didn’t have anywhere near enough money to own one, so instead I focused on the VAG cars that I’d learned my skills on. I started to restore a Mk1 Golf with my best friend Waldi, all the while keeping an eye on the E9 market, and eventually I had enough funds to buy one of my own.”

The search for Alexander’s dream car wasn’t exactly as easy as tracking down a Mk4 Golf or some such, given the inherent obscurity of the E9, but in time an appropriate candidate presented itself in the classifieds: a 1971 3.0 CS, situated around 200km from his home. While residing in Germany, the car had actually been imported from Italy: “Because of this, the rust in the chassis wasn’t too bad, and that’s really what you need to look out for with these cars,” Alexander explains. “The paint job was bad, so was the chrome, and the seats were in really poor condition – but it was solid and complete, so I bought it!” 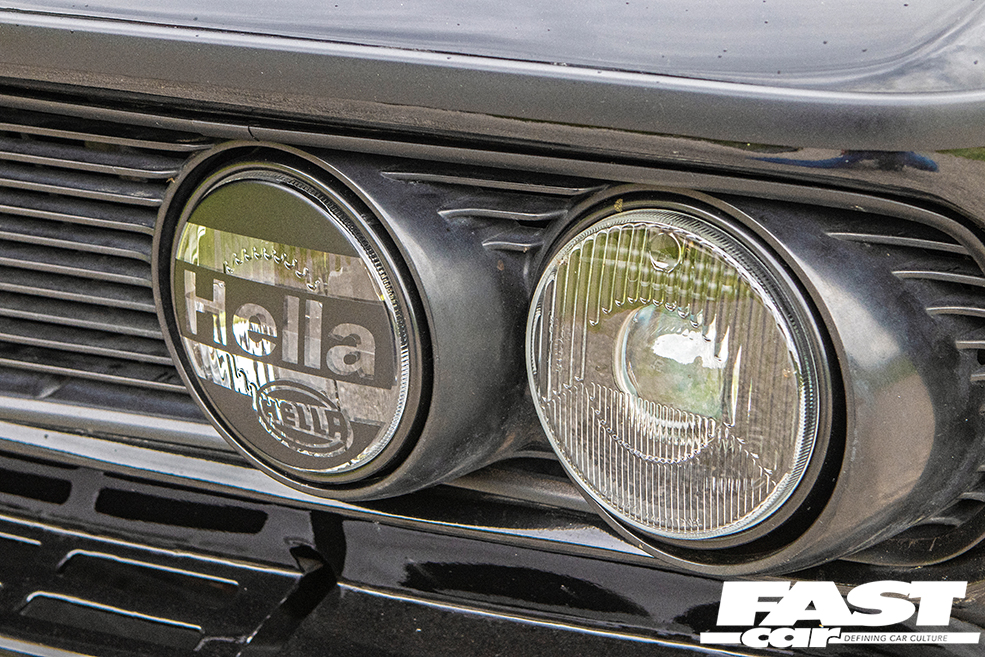 On getting the dream car home, the first job was to try to resurrect that tired black paintwork. Having dropped most of his readies on the purchase, Alexander knew that throwing a load of extra money on a full strip-down and respray wasn’t on the cards, so he instead focused on correcting, polishing and obsessively detailing to get the car back to its very best. He humbly explains that it’s not perfect, and one day in the future it will be stripped-back and fully painted, although we’d suggest that perhaps the way it is now is ideal: it looks pretty damn perfect from a distance (and certainly photographs well), but getting close reveals some beautiful weathering and patination that really tells a story about this E9’s 48 years on this earth. It’s a car boasting a life well-lived, shifting effortlessly into a new phase at Alexander’s hands.

That’s because the plan from the start included way more than simply an obsessive approach to paint restoration. The vision for this project was to create something mean, menacing and murdered out, so he set about sourcing all of the chrome trim pieces required to replace the tired originals, along with a rear bumper from the E9’s predecessor, the Neue Klasse 2000 CS, and then cunningly blacking everything out. Whereas once the coupé glimmered and glistened, now it shimmers through the metropolis with the malevolence of a low-down gangster. With this stylistic and conceptual makeover achieved, Alexander added the deep chin spoiler from the revered CSL because, well, why wouldn’t you? It’s a superb and iconic design in the genre of retro aerodynamic addenda, and if your aim is to make an E9 look exponentially angrier, a CSL front spoiler is an essential piece of weaponry for your arsenal. 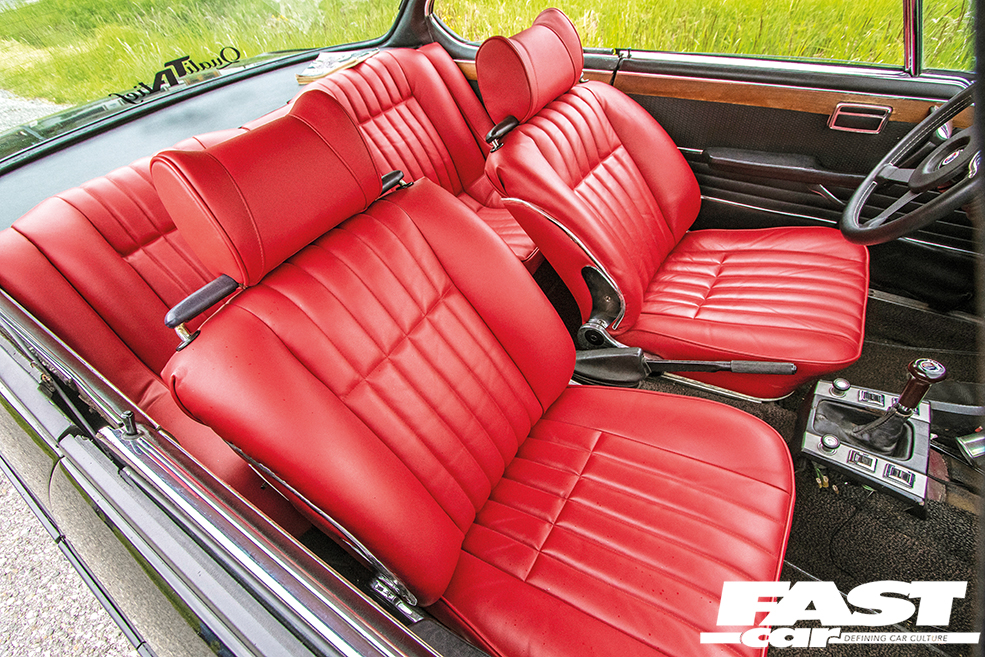 With the vibe carried off masterfully, it was now necessary to get the whole thing kissing the tarmac. After all, building that super-low Golf when he was a teenager planted a seed in Alexander’s affections, and his enthusiasm for slamming all the things knows no satiety. He’s proud to highlight that the underside of this CS is all original, thanks to its early Italian years, but that hasn’t stopped him augmenting it with clever modern tech to amp up the awesomeness: we’re talking about a full air-ride setup from TA Technix, the German aftermarket suspension meisters, and the reduction in altitude when this brute airs out really is remarkable. It’s a car of unusual proportions, all chunky at the bottom and featherweight at the top with its slender pillars framing alluringly pillarless sides; a car that’s at once long and wide and yet actually deceptively small, and the act of laying it out on the ground highlights just how compact it can look in a modern context. When Alexander stands next to his beloved sharknose, its roof barely comes up to his stomach. The race car vibe of the CSL unexpectedly rears its head once again!

Naturally, with so much effort going into the stance, those arches need to be filled with something suitably aggressive, and it helps that the E9’s wheel arches are pleasantly accommodating and capacious: filling the wells today are a set of 18” BBS RC061 and RC062 Style 5 wheels, tastefully finished in (yet more) black with just the stainless bolts and custom emblems picking out the detail. All fit for the theme, exuding angry vibes and creating something that was born to cruise. This was the plan from the off, to make something that wasn’t just beautiful (if slightly scary) to behold, but pleasant to use too. With this in mind, the interior’s had a tasteful refresh – those worn-out seats needed it anyway, but rather than simply recover them Alexander’s played a blinder here. To counterpoint the black-on-black theme of the outside, the innards now boast a new slathering of lipstick-red Nappa leather, a premium finish very much in keeping with BMW’s original design ethos for the BMW E9, and it’s further elevated by the addition of an Alpina steering wheel and gear knob. “Before I even I owned the car I knew the seats had to be red,” he grins. See, this is a man with vision. He knows what he wants, and just how to achieve it. 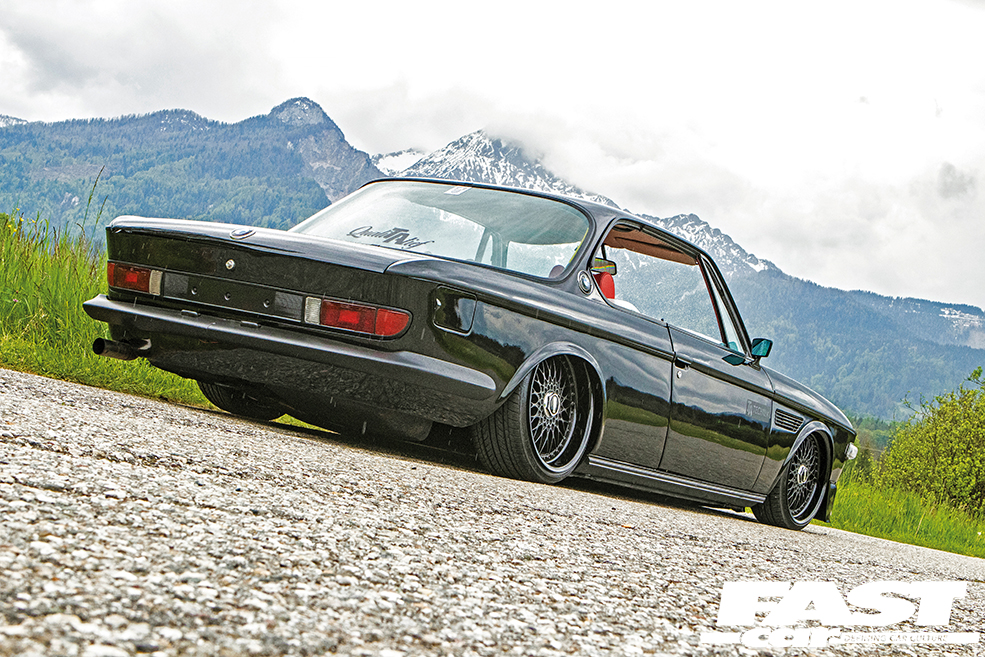 The engine, for now, is the original-spec BMW E9 3.0-litre straight-six M30 unit; the addition of a Schmiedmann exhaust manifold and a custom stainless steel exhaust system brings power in at an estimated 180hp or thereabouts, although Alexander has plans in this area: “At some point it’ll be swapped out for a 3.5-litre fuel-injected M30 with Schrick cams,” he grins. Yes, we imagine that would provide the requisite thrills to transform this E9 from mean urban cruiser to hyperactive road-racer. For now, though, this car is exactly what Alexander always hoped it would be: a rare and obscure sharknose with aggression in spades, and just the right quality alterations to elevate it into the realm of the aspirational. For a lot of people, the CSL is the be-all and end-all of the E9, so let Alexander Steffen’s creation be a new reference point: with the right treatment, these prowling monsters can be pure, straight-up gangster rides. And damn the rarity. “I built it this way because it’s exactly what I wanted, I didn’t make it to please other people,” he reasons. “Some people will never understand that.” But it doesn’t matter; ‘It’s exactly what I wanted’ is all the justification a project car needs.