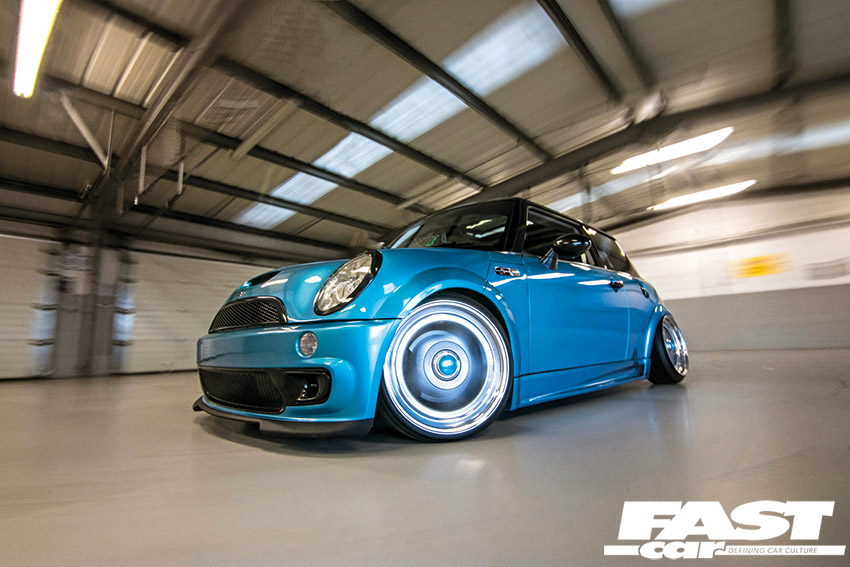 For Colt Powell, the stance scene is life, and he’s inviting more Mini owners to join the movement with his bagged Mini Cooper S R53.

Anyone who loves modified cars will agree that the formula of massive lows and dished rims is an absolute winner and makes almost anything on wheels instantly cool. Get your stance on point, and the rest of a build looks after itself, but get it wrong, and no matter what other amazing mods you have, you’ll still be driving a lemon.

The global stance community takes this concept to its absolute Nth degree, turning out slammed showstoppers by their 1000s from Japan to California and now, Portsmouth, England.

Colt Powell developed an obsession with this scene even before he could drive, and, inspired by YouTube stance featurettes and show reports, he was determined to own and build a car that would hold its own among the very best.

Fast-forward to this photoshoot, and it’s clear he’s not only nailed that objective, but he also has a real talent for aesthetics, even at this early stage of his car modding CV. 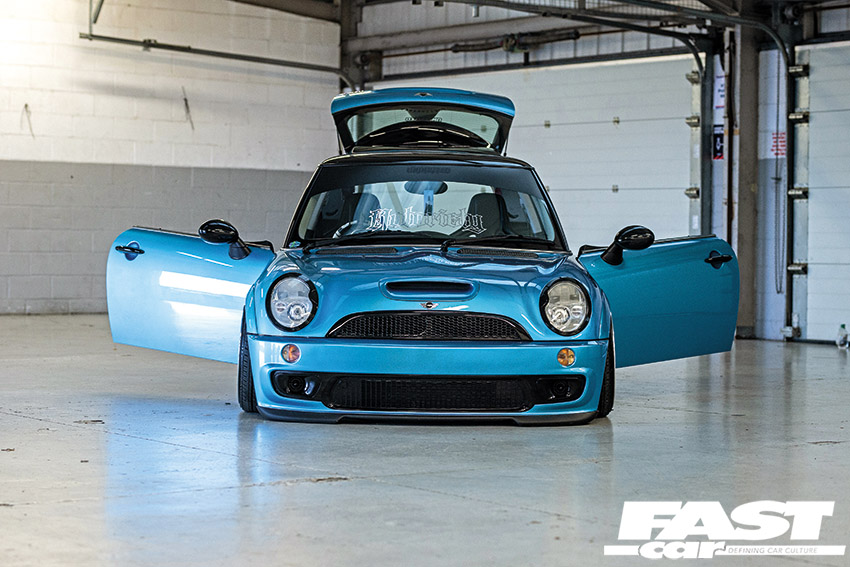 “I didn’t exactly have a precise spec list in my head,” admits Colt, “but I had a vision of the overall end result, which was BBS split-rims, air suspension and just a really clean unfussy look.”

When asked why he chose a Mini and especially a Cooper S R53 (check out our buyer’s guide) as the unusual basis of a stance car, Colt explains, “My dad had a Cooper S in Electric blue when they first came out, and I loved it as a kid. They’re very underrated, and the fact they’re not commonly stanced was a bonus for me as it meant the car would be more unique.”

The first phase of modifications actually included coilovers, a stripped rear and OMP bucket seats, which is, of course, a much more usual approach within the Mini scene. A cheap set of ‘stance’ wheels – Japan Racing JR26s – heralded the sharp turn away from convention, however, and these shiny deep-dished hoops were complemented by fully colour coding the exterior trims and fitting an Aero rear bumper and side skirts. 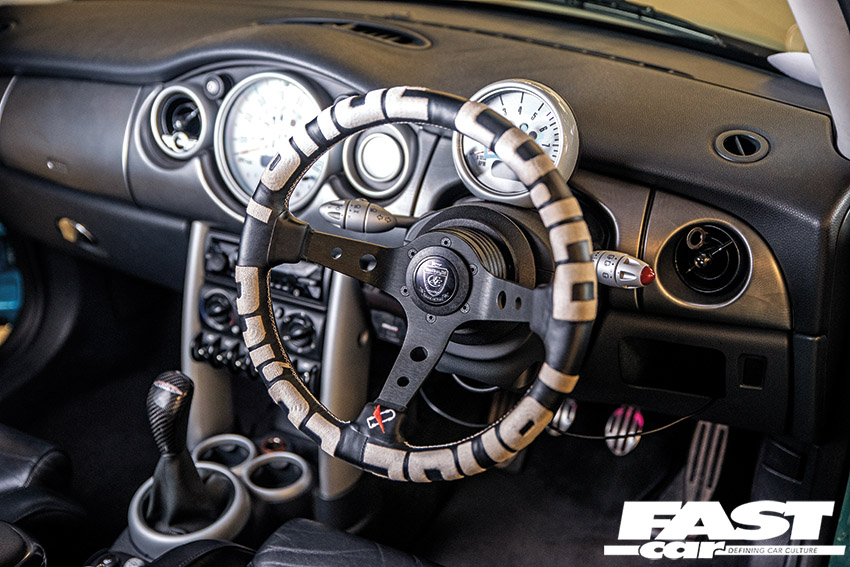 The colour coding of the black plastics, in particular, immediately made the whole car appear much smoother and cleaner, more bling show car than a typical R53 Mini B-road blaster. Colt has since taken this smoothing concept further by fitting a GP1 bumper and filling in the front number plate recess.

It’s very reminiscent of the old American hot rod technique, Frenching, where they smoothed everything from lights to aerials and number plates. “It’s fair to say I am quite inspired by the Americans,” agrees Colt, “They go above and beyond with their cars, and can explore limits without restriction.”

With the bodywork looking box-fresh, the wheels and stance really needed to be brought up to the same standard. Colt did try a set of Porsche Twist wheels, but they didn’t have the impact he was looking for, so he decided to bite the bullet and finally invest in his dream set of wheels. “This took a while,” he laughs, “BBS RFs don’t grow on trees, so I scoured motoring ads from all over Europe to find a set.” He ended up importing these from Italy after stumbling across an ad on Gumtree, in a BMW 5×120 fitment. Colt wanted them in that PCD as he planned to buy a BMW in the future and could then simply swap the wheels between the two cars as and when required. 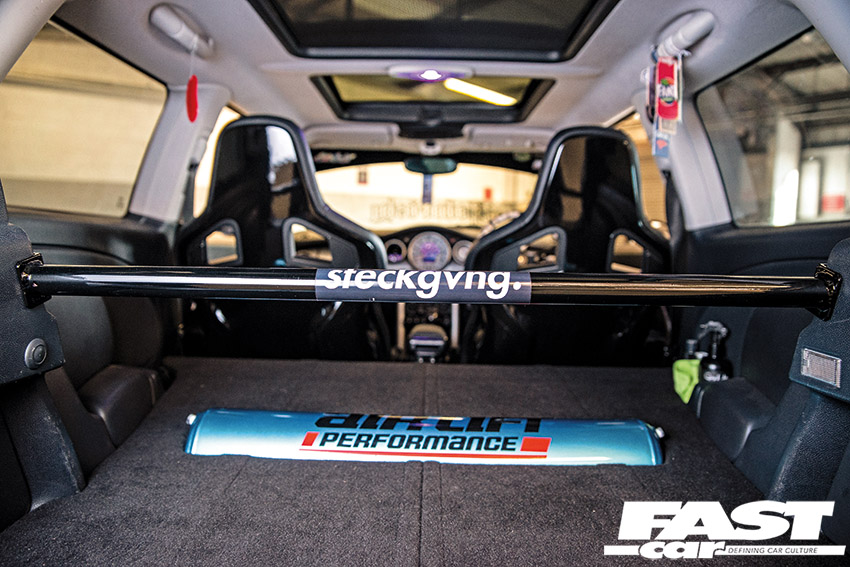 As soon as the wheels landed in the UK, he sent them off to Wheel Unique to rebuild to his spec – initially in a 9”-width and big negative offset all round, but once the Mini to BMW PCD adaptors were fitted, it was clear they would need to be pared back a bit. “After a few dummy tries and a bit of swearing, I ended up admitting defeat and sending them back to Wheel Unique. In the end, because of the PCD adaptors, we had to compromise at 8.25”-wide at the front and a 9” at the rear,” says Colt who, in an ideal world, would have fitted 10s all-round!

While the wheels were off being made, the unsuspecting Mini was driven to Car Audio Security for a rather pretty install of an Air Lift 3P air suspension kit. Colt chose this particular product because it’s fully adjustable, including camber-adjustable top mounts, which he knew he’d need to get the BBSs to fit up front. He had always envisioned the suspension air tank to be colour-coded and to sit half-sunk into a false floor, and Car Audio Security really delivered on his vision. 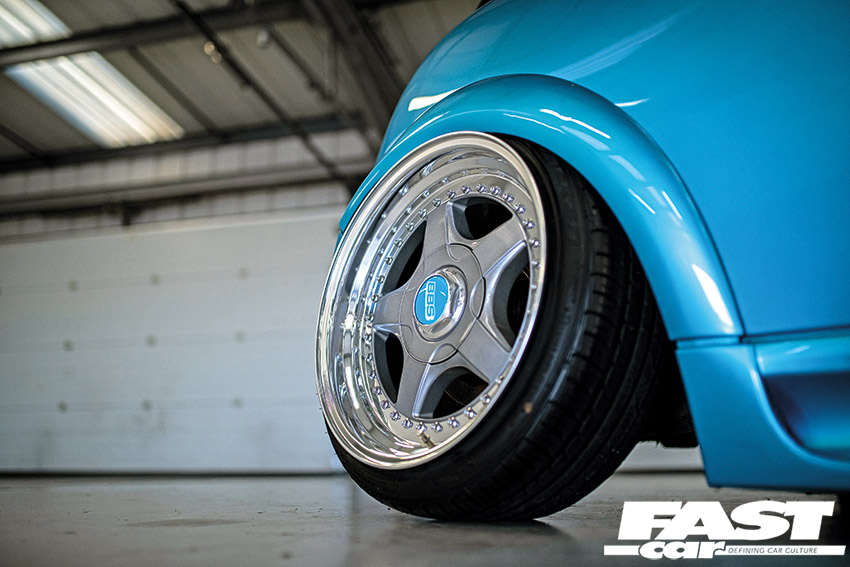 Getting the stance perfect still took a bit of fiddling around, with much arch-trimming and huge dollops of negative camber dialled in on the front top mounts, and the rear adjustable arms maxed out to get the fitment just right.

Many of you may be wondering how the bagged Mini Cooper S drives after what seems a pretty extreme exercise in form over function. “It actually drives more comfortably now than it did when it was static on coilovers,” explains Colt. “Okay, it isn’t going to win any races, but I am happy with how it drives and really over the moon with how it looks.” But doesn’t he miss that razor-sharp R53 go-kart handling? “Not at all,” he laughs, “it’s stance over handling for me, it’s a road car after all.”

Needless to say, Colt’s interest in engine tuning hasn’t been a top priority, although the car now has most of the supporting mods needed to make the most of a reduced supercharger pulley and tune in the future. 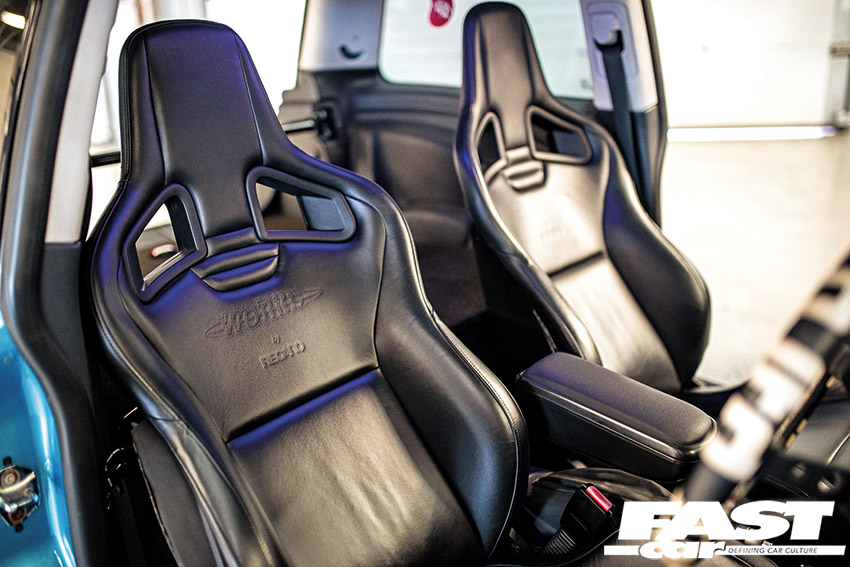 The interior, meanwhile, is sorted, as he managed to beg his very kind and loving dad to ‘donate’ his pair of Recaro Sportster CS seats, which he had bought to go in his GP2, and a very funky Vertex steering wheel completes the picture.

Colt has thoroughly enjoyed building and showing the car, especially at places like the Players Show, and he has built a great network of friends over the past few years. “I don’t think I’d have met half the people or made half the friends who’ve helped me build it if I was involved in a different scene,” he adds, “I can thoroughly recommend the stance community as good, fun people.”

Evidently, his passion for the types of cars he grew up fantasising about is stronger than ever. So much so that he has now bought his next project to accompany the Mini rather than replace it. “It’s a BMW E38 7 Series,” he smiles, “it’ll be on hydraulics, with these BBS RF wheels but rebuilt as 19s, so will be pretty wild… I’ll never sell the bagged Mini Cooper S R53, though, as it’s created so many forever memories for me.”

In a world of ultra-high-end Porsche, BMW, Mercedes, and VIP Japanese stance builds, it’s nice to know that a humble R53 can hold its head high with a bit of good taste, planning, the right components, and an eye for detail. Who knows, maybe Colt’s bagged Mini Cooper S R53 will inspire a few more of us on the Mini scene to come stancing? 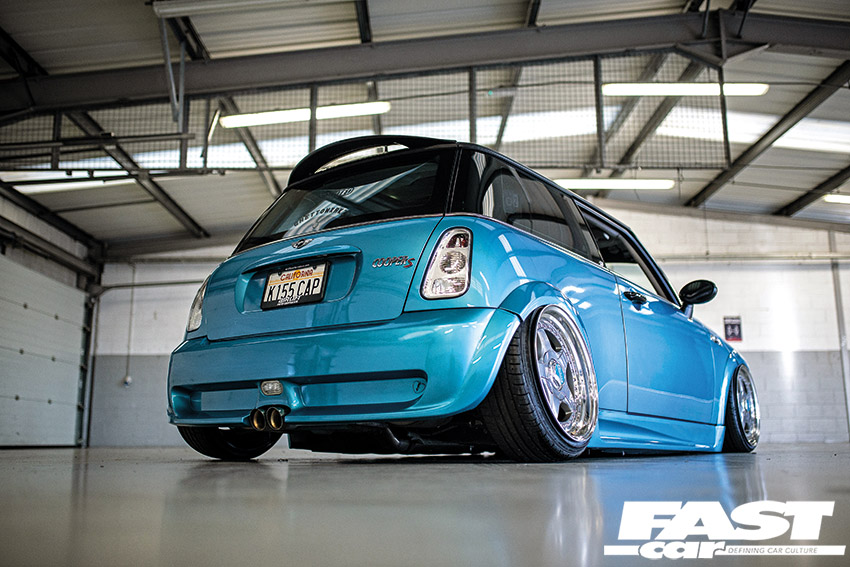