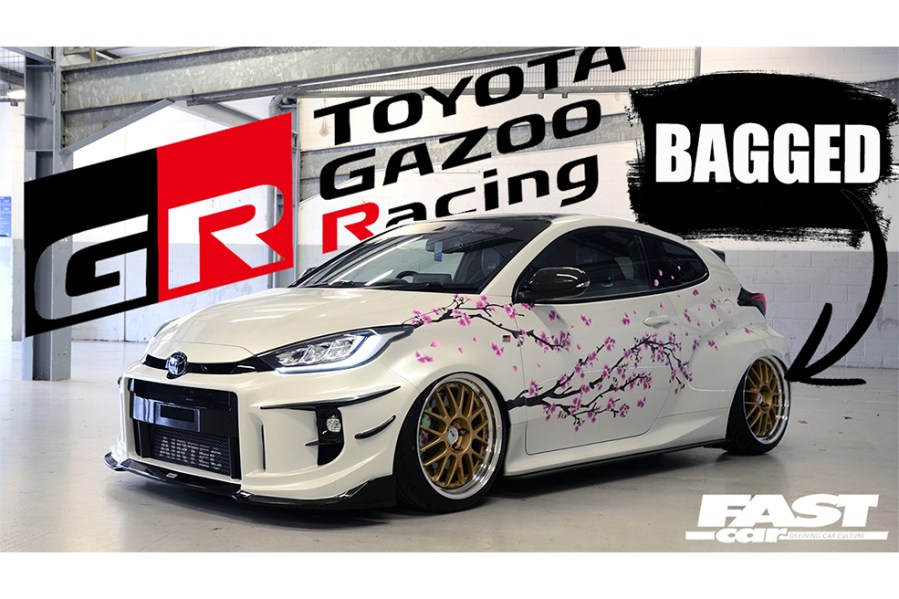 The fusion of delicate cherry blossoms and hardcore motorsport machinery has led to something pretty interesting in this bagged GR Yaris.

The GR Yaris, as a snapshot in automotive history, is the type of car we’re unlikely to see again. The owner of this artfully modded example, Chris – aka @p3lwo – is philosophical about his reasons for buying: “There’s just something bittersweet about the car,” he muses. “Toyota never ended up using it for WRC, yet Akio Toyoda made the call to continue production because he wanted people to have it. With the prospect of the internal combustion engine being phased out in the near future and the move to spaceframe chassis meaning homologation specials weren’t needed any more it’s just a perfect storm of factors that would see any other production car being cancelled. I don’t think we’ll see anything quite like it ever again and I wanted to experience ownership of a mad little rally car while I could.”

It’s fair to say that, as a showroom model, the Toyota GR Yaris is no ordinary hot hatch. This is a limited-run motorsport project, built in the vein of the Group B homologation specials of the 1980s, created solely to be excellent rather than to be affordable or cheap to build. Make no mistake, this isn’t just an ordinary Yaris with a hot motor stuffed into it. In fact, it’s got an entirely different bodyshell to the mainstream Yaris, with fewer doors and a slopier roof. Under the bonnet resides the coolest three-cylinder engine this side of a Charade GTti; the world’s most powerful production three-pot, it’s a 1.6-litre with a ball-bearing turbo kicking out 257bhp and 266lb.ft. There’s a close-ratio six-speed manual hanging off the back, and a super-lightweight four-wheel-drive system. The bodyshell is super-lightweight too, with a carbon fibre roofskin and aluminium doors, boot and bonnet. If you tick the £3,500 ‘Circuit Pack’ box, you also get forged 18” BBS wheels with Michelin Pilot Sport 4 tyres, uprated suspension and brakes, and mechanical front and rear Torsen diffs. Alternatively, the £1,500 ‘Convenience Pack’ gives you a premium JBL audio system and head-up display. 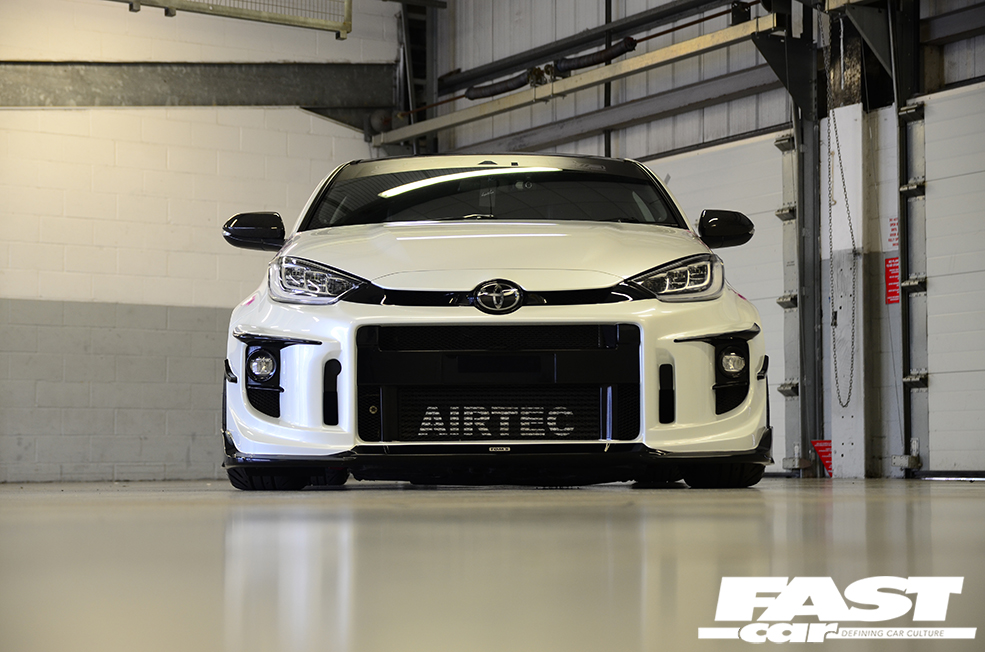 A stock GR Yaris will rocket from 0-62mph in 5.5-seconds, and yes, it will drift: ‘Normal’ mode splits the torque 60:40 front-to-rear, ‘Track’ is 50:50, and ‘Sport’ is a hilariously lairy 30:70. So yes, this is absolutely one of the most important cars of our generation. A genuine future classic.

Of course, when it comes to modding and personalisation, a car is just a car: there will always be hand-wringing purists who’ll froth ‘You’ve ruined that!’ from behind their keyboards if you should have the nerve to mess with a hallowed classic (or indeed modern or future classic), but the evidence before us shows that this sort of fury is a load of old toffee. Chris has created something awesome here, because that’s just what he does.

Growing up next to a Peugeot garage, Chris’s formative motoring experiences happened behind the wheel of French hot hatches, before Driftland opened up nearby and he made the shift to skidding about in old Beemers. Having had his fill of fixing aged motors out in the wind and rain, he started looking at modern performance cars and, via a Hyundai i30 N, he found his path to the Toyota GR Yaris. 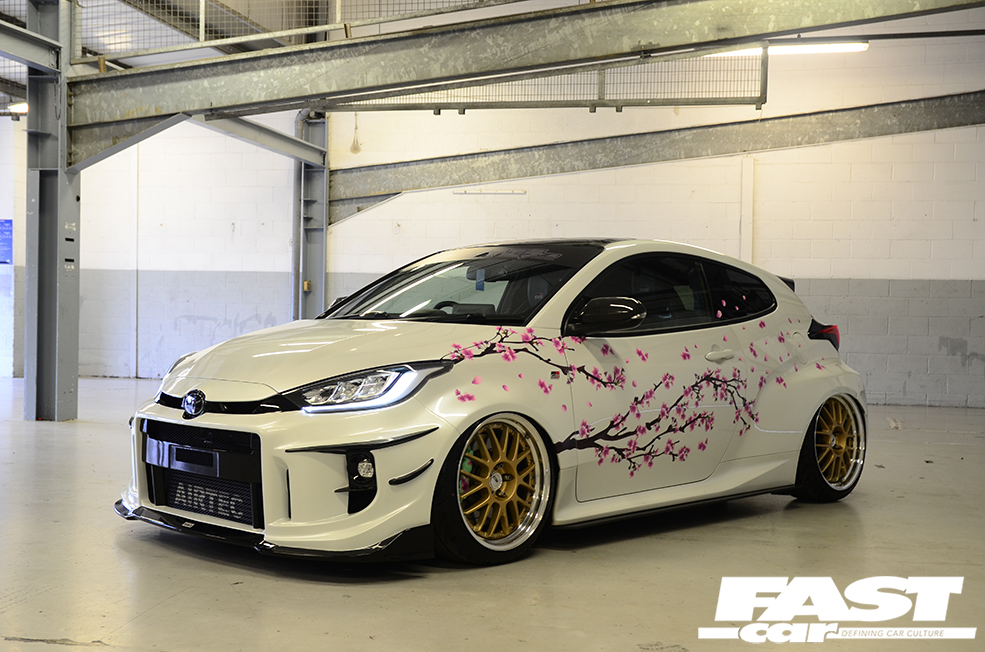 “I actually had an order for a flat white standard car locally, but because I’m impatient I found a used car with about 1600-miles on it down in Chester,” he says. “This was a pearlescent white Circuit Pack model with the forged alloys and Torsen diffs, so I had to settle for a better spec than the one I originally ordered! I think I timed it well as I basically paid list price for a low-mileage car while they’re still being advertised online for £3-4k over list; they’ve held their value so well I feel like I got a bargain even though it wasn’t brand new.”

The original plan was to keep the now bagged GR Yaris fairly stock, but – how many times have we heard this one? – he ended up getting a bit carried away. To begin with, Chris was simply envisaging a drop in altitude, some aftermarket rims and one or two trim bits… but after a month or so of ownership, a van reversed into the rear quarter and it needed a bit of paint – and just like that, a switch flicked in his brain. Things can be fixed, things can be upgraded and/or returned to stock, why the hell not just have some fun with it? 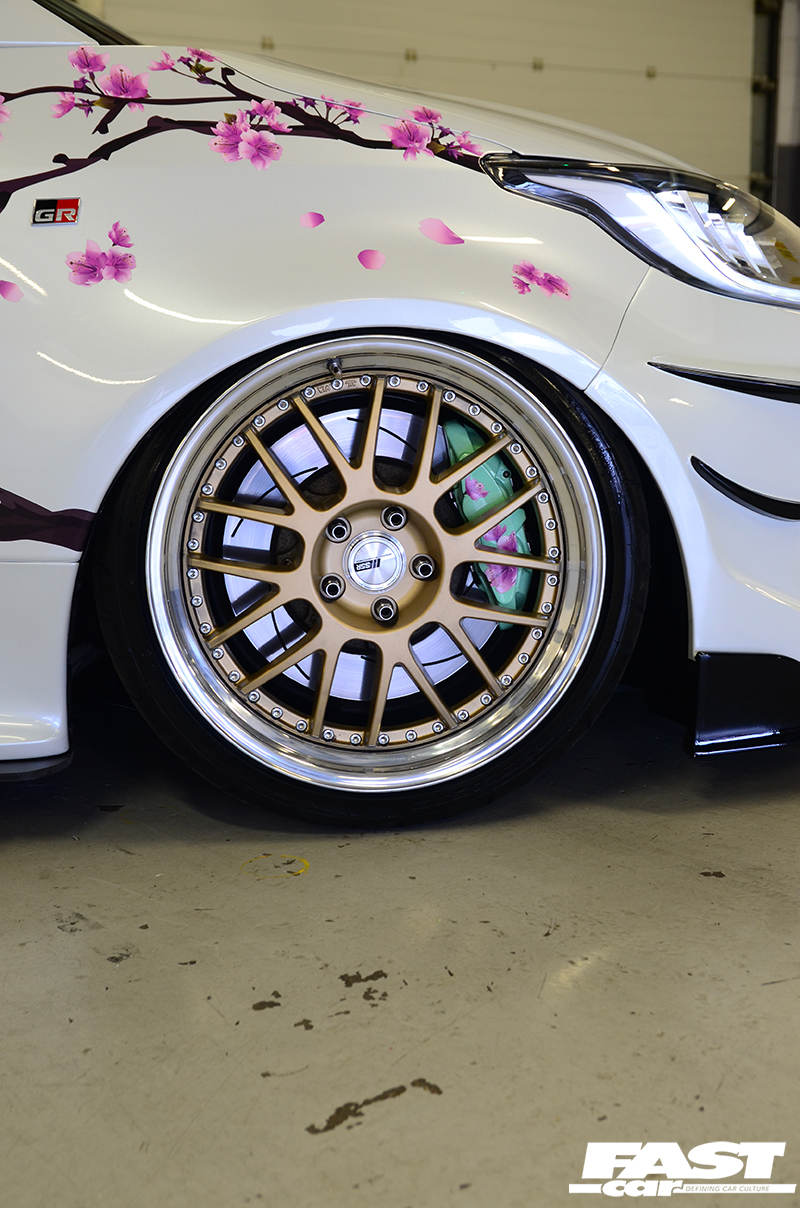 “I really should know better by now, but I guess I get excited!” he laughs. “I started to model design renders to experiment with ideas, and learned to model and 3D-print which has opened the door to all kinds of possibilities. I try to do everything myself, and learning these new skills means I’ve been able to make an intake, trim pieces, gearknobs, all sorts.

“The biggest challenge was the air suspension,” he continues. “As far as I’m aware, it was the first bagged GR Yaris in the world, which meant it was a bit of leap into the unknown. At the time I had the BC BR Series coilovers and they do a conversion kit for the front struts, but didn’t have anything off the shelf for the rears. Rather than go for custom fabrication and universal bellows, I got in touch with Ricky at Luxury Auto House who sourced the D2 air struts and I did the install myself on my driveway, like most things I do. It wasn’t too bad, but it was something I’d never worked with before so there was plenty to learn and put into practice. To this date though, not one air leak or rubbing issues so I reckon I did well!” 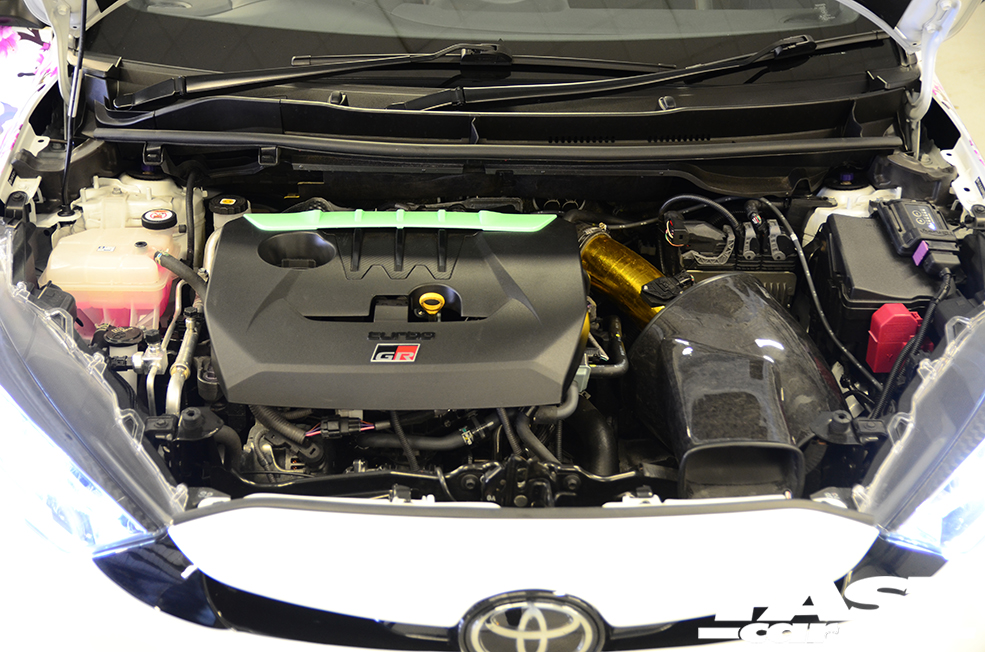 With great suspension comes great responsibility, so an appropriately awesome set of wheels was the next thing on the to-do list. Chris was keen on the idea of something bespoke, but such things can take forever and cost a fortune; conversely, used sets tend to be staggered fitment which the GR hates due to the AWD. Fortuitously, however, a square setup of SSR Professor MS1 3-piece wheels popped up at JDM Distro and Chris immediately jumped at the chance.

Interestingly, as is the nature of a modder who can’t sit still, these wheels have already been replaced since our shoot, Chris fitting a set of Rotiform KB1s. The car’s constantly evolving, you see: having achieved 300whp on the stock ECU and turbo, it’s gone back to Flat Out Performance for further development work, and he’s talking to a couple of companies about hybrid turbos to achieve a power figure beginning with a four. Which, on a little three-pot on stock internals, is pretty mad. 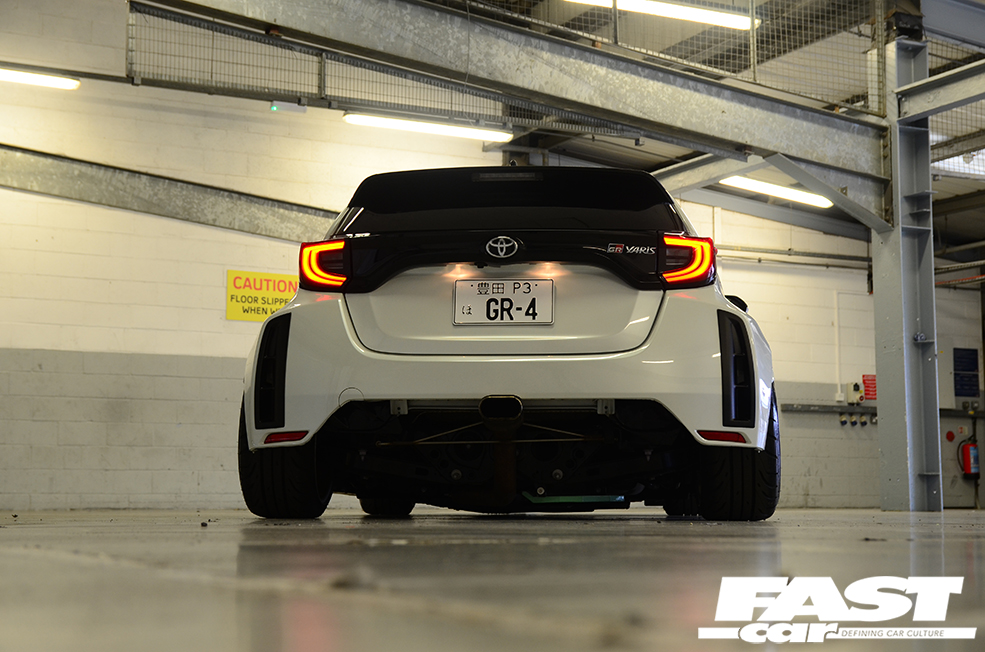 Don’t go thinking it’s a show pony either: “I use it all the time, it’s my daily and I use it for commuting, site meetings for work, holidays and all sorts,” Chris assures us. “It’s been really interesting seeing reactions to it; of course at first there were plenty of people quick to judge – air suspension still gets a bad rep purely through a lack of understanding so adding it to a car that was built to handle well from the factory threw a lot of people for a loop. Personally I’m not actually bothered what people think, I just shrug it off these days. I think 10-15 years ago I’d have been upset but I’m older and wiser now – it’s my car and all that matters is doing what’s right by me. I still see and hear things positive and negative, and naturally the good stuff is way more welcome than the bad stuff, but I’m not a people-pleaser or seeking attention, I’m solely focused on building my vision for the car. If people vibe with it and want to come along for the ride then great, if they don’t then that’s also great. There’s plenty of people who are keeping their GRs box-fresh and they have every right to. I’ll enjoy mine in my own way.” And that’s exactly the point. A snapshot in time, Chris is doing this by his own rules – and the results, you’ll surely agree, are pretty spectacular. 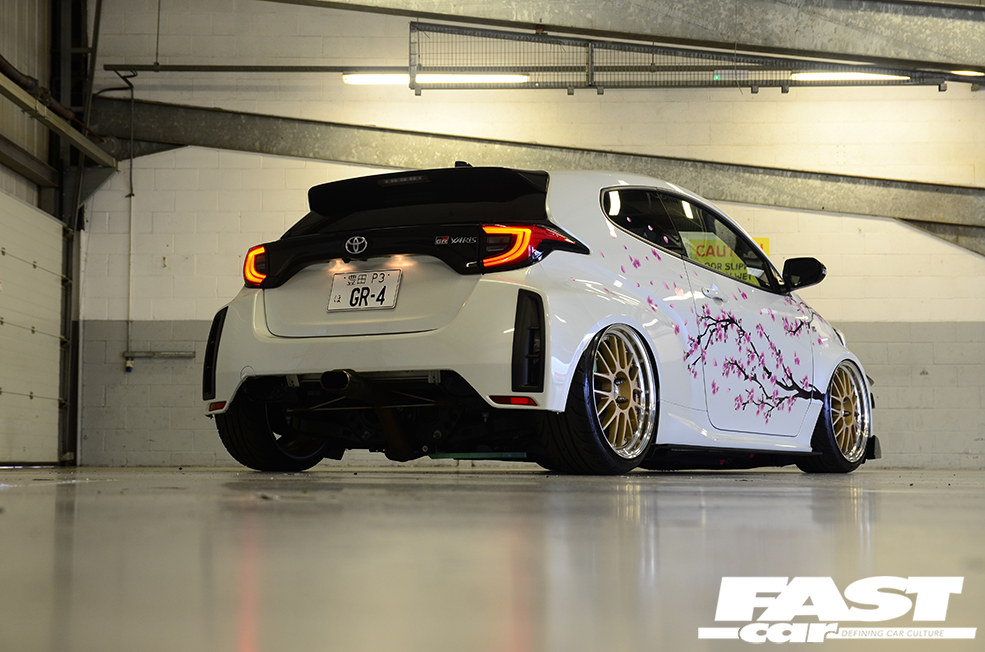 “Thanks to Linzi for turning a blind eye to me converting the house into a workshop/storage facility while I make all my carbon stuff and constantly rotate wheels and parts! Thanks also to Flat Out Performance for helping me with the things I can’t do myself like ECU mapping and servicing and starting to push the limits of the car; Ricky at Luxury Auto House for getting me the parts I needed to get the car on air; Max at Toyota Gatwick for providing me with seemingly enough spare parts to build a second car in the garden; Jordan and team at Pro Bodyshop Coatbridge for all their help with paintwork, tyre fitting and wheel refurbs.”