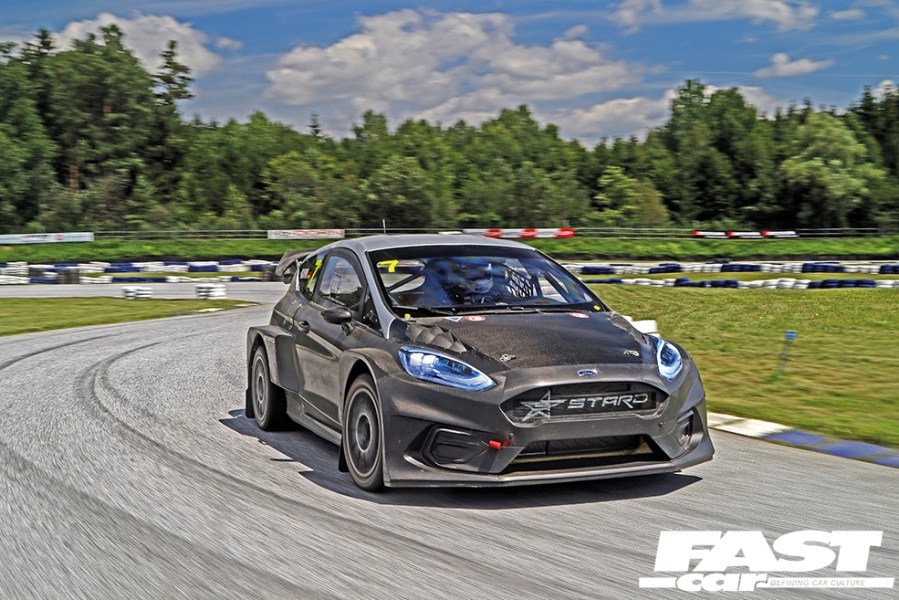 Thought all electric cars were boring? Think again. Our friends over on Fast Ford got behind the wheel of the fully-electric STARD Fiesta ERX that competes in alongside its petrol-powered peers in the British Rallycross Championship.

Electric cars are everywhere right now, including motorsport. And this year, for the first time, they will race within the headline Supercar category within the British Rallycross Championship, where they will go head-to-head against their petrol counterparts.

The future is here, but how will the electric cars fare against internal combustion? Will they purely be making up the numbers?

Austrian-based motorsport specialist STARD (Stohl Advanced Research and Development) is leading the field with its fully-electric Fiesta, which joins a fleet of conventional petrol-powered rallycross Fords that scooped successes in previous events.

This Ford Fiesta Mk8 is an evolution of the internal combustion-engined World Rallycross Supercar that STARD ran to podium success in 2019. It has, though, been reengineered so the suspension geometry, centre of gravity and weight distribution better suit the electric application.

Known as the STARD Fiesta ERX, it uses STARD’s four-wheel-drive electric kit, part of its REVolution platform, which includes three 150kW motors (two at the rear and one at the front) and inverters. Both axles are accompanied by a two-speed transmission, plated limited-slip differentials, a 420v battery, motor controller and VCU (vehicle control unit), boasting an output of 450Kw (603bhp) and 1100Nm (811lb.ft) torque. 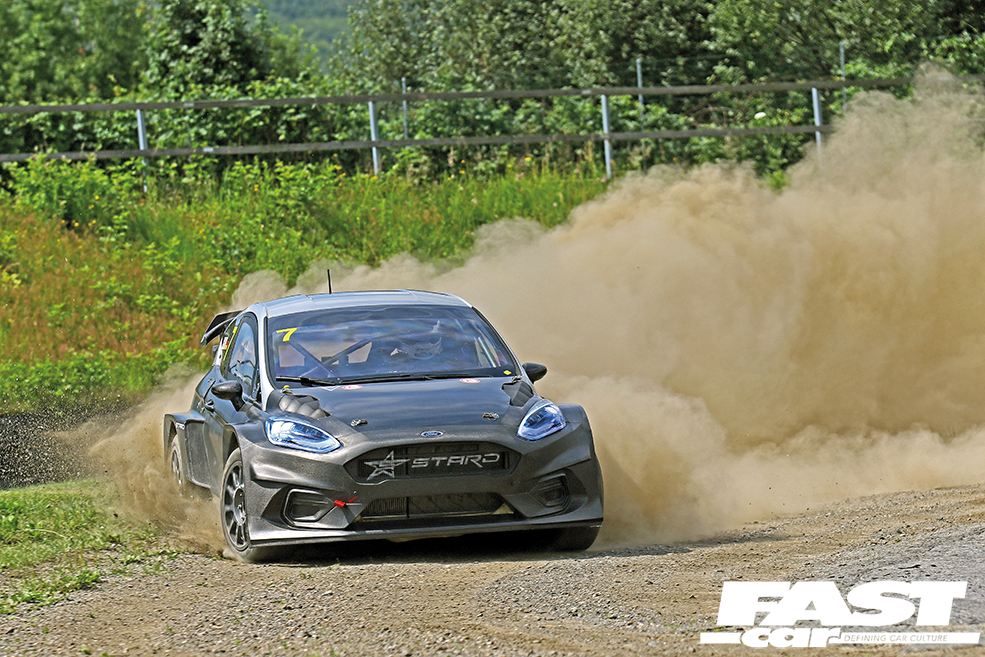 The kit has been designed to be retro-fitted to existing conventional Supercar bodyshells, or built into new cars. Customers are expected to be privateers, while a rally version is also being offered for the R5 class (one step down from full-blown WRC).

So, what is the battery-powered bruiser like to drive? And how does it feel compared with the STARD rallycross machines we tested (including a prototype back in 2017, and again in 2019) here at Lydden Hill before?

Climbing into the left-hand-drive seat, aside from the panel hiding electronic wizardry on the passenger side and the high carbon unit next to the seat where the transmission tunnel would usually be, it feels almost like any other thoroughbred race car… until you look down and see only two pedals.

There is another oddity, though, because in this machine there is no mechanical connection between the front and rear of the car. So, where the transmission tunnel would usually be and where the rear seats are, the battery is located, in a T-shape. 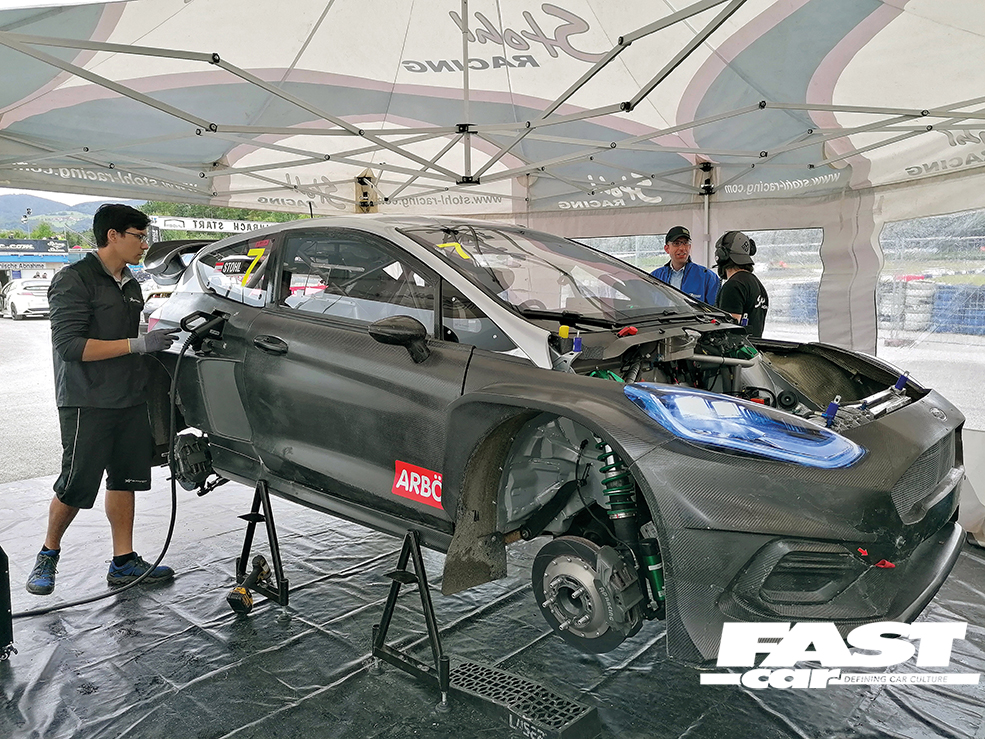 Engineer Philip Thonet-Drechsel reminds us of the controls. We’re only getting a couple of laps today, so we don’t need to worry about all the variables for the start parameters that the car offers.

To launch, we’d be having to do clever things like selecting how much of the total available torque to use for front and rear axles and work out the percentage of throttle input for the start. That is in place, in part, to ensure driver input can make a significant difference in all-electric races, rather than the process being fully automatic.

Strapped-in and ready to go, the first of two buttons to press on the centre console switches the system on, the second activates drive. Although only second gear will be required from the two-speed ’box today, the shift paddle behind the steering wheel is also where reverse is found and, by holding my foot on the brake just like driving an automatic road car, I push the paddle away from me with my right fingers. The ‘N’ changes to ‘R’ on the dash with just a small transmission noise, and I reverse out of the awning.

The Fiesta glides almost silently through the paddock to pre-grid and, after a ten-minute wait during this general test day, it’s time to head out on track. 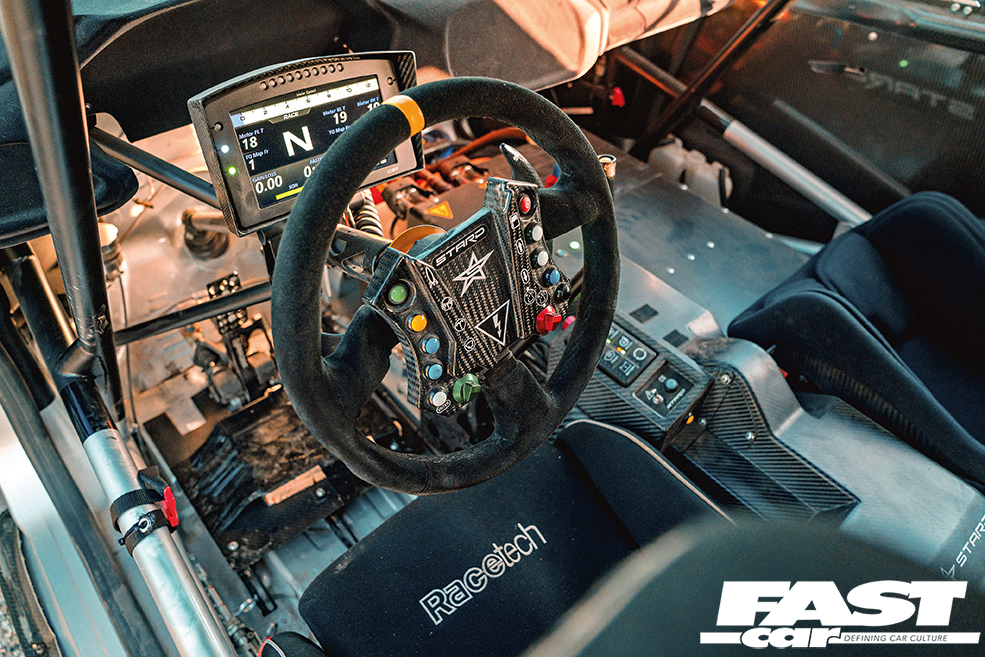 Much like a conventional Supercar – which uses an anti-lag system to aid throttle response but should only really be turned on once moving – the STARD Fiesta ERX has a ‘race mode’ button on the steering wheel-mounted switch panel. Having engaged forward drive and pressed said button, I head out onto the oldest rallycross circuit in the world.

Driving through the start grid, I’m hard on the throttle heading towards the first corner. Whether in a normal Supercar or in an electric machine, the acceleration – 0-to-60mph in around two seconds – is always amazing. Being forced into the back of the seat on the run towards Chessons Drift is shocking.

I’m early on the brakes, cautious that I don’t know how the brake pedal feels or how well the brakes will respond, and I have to get back into the throttle into the entry of the corner. Hugging the barrier tight on the inside, utilising the strip of smooth tarmac amid the loose section, I plant my right foot on the throttle as the barrier ends, the rear of the Fiesta stepping out slightly.

It’s simply astonishing how quickly the trio of motors respond to inputs through the throttle pedal, and within milliseconds the crossply Cooper tyres are scrabbling to deliver all of the total available torque into the track surface below.

Although the car is obviously quieter than an internal combustion-engined Supercar you can still hear the motors working hard, the whirring of the transmission and the sound of stones hitting the inside of the wheelarches. The rear dances slightly under what feels like endless acceleration, sling-shotting me towards the first true tarmac corner, the right-hander of Devil’s Elbow. 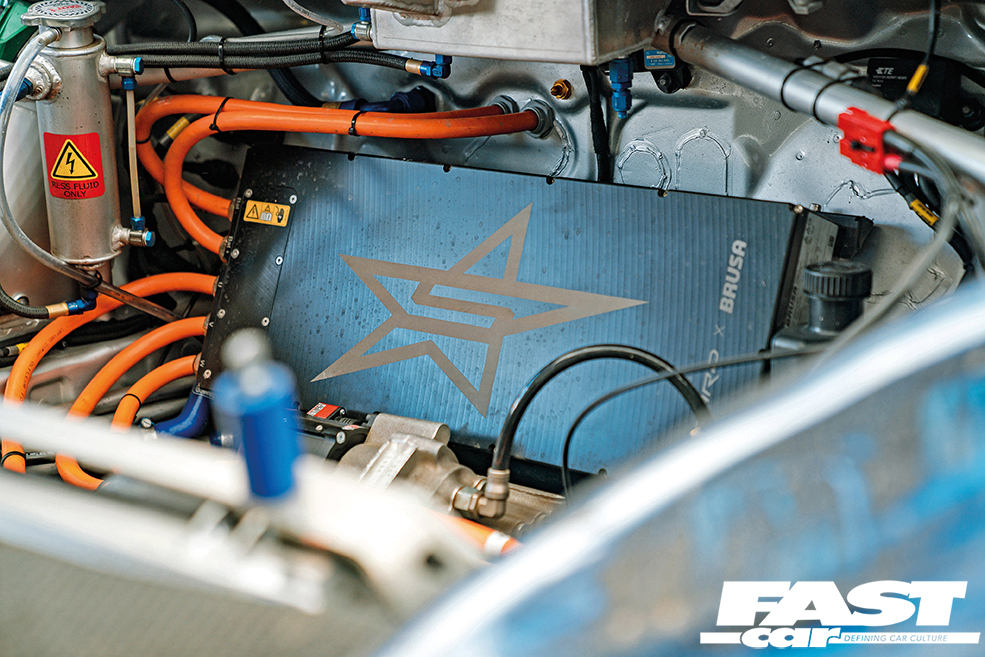 I again brake early with my left foot but the front of the car turns-in nicely. Clipping the kerb on the inside, I’m able to get back hard on the throttle before the apex to drive up the hill, using all the of track width on the outside.

Into the hairpin at the top of Hairy Hill, the nose turns-in well and I’m on the throttle in the entry phase to help the rear to rotate and head down towards one of the best corners in the rallycross world, Paddock Bend.

It’s a bizarre sensation not having to change up or down gear and, in the braking area for Paddock where you would usually shift down at least gear or two on entry (which would also help with weight transfer), it’s a different sensation only using the brakes to scrub speed; you have none of the friction usually created by a conventional transmission.

A little cautious through Paddock, I stay hard on the throttle over the loose but take a small confidence lift through the fast high-kerbed chicane to cross the finish line, the car riding both kerbs with ease.

For the second lap I push harder, and on the long-right hand exit of Chessons Drift, I have to come out of the throttle briefly to bring the nose of the car back in line. At the top of the hill I turn in hard but don’t get enough rotation done on entry and the Fiesta understeers wide. With a handbrake that works just like in a normal Supercar, by cutting drive to the rear wheels, I tug the vertical lever to the right of the steering wheel and the back swings round beautifully. 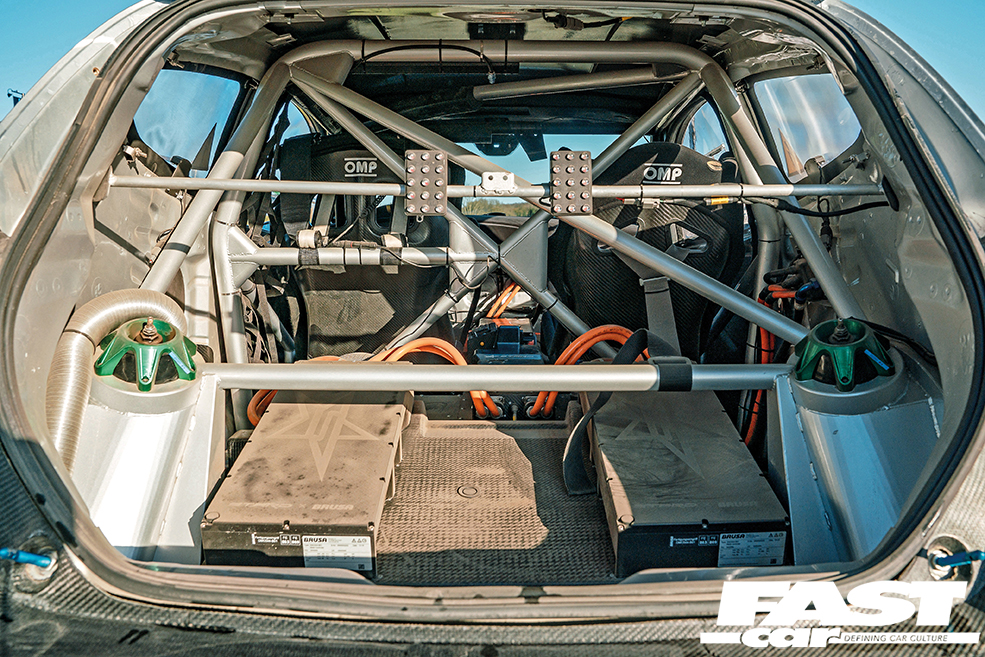 My right foot gets hard back into the throttle and the Fiesta slides sideways through the exit of the corner. It would have been faster to come off the throttle and kill the wheelspin, I’m sure, but I’m not here to set lap times and it’s far more fun to keep the drift going with opposite lock, the car filling with tyre smoke.

It’s a similar story through Paddock Bend for the second and final time. I turn in a bit later than the optimum line through the corner, chucking the car into the looser part of the track on the outside, the Fiesta sliding sideways, feeling very nicely balanced, despite being around 180kg heavier than a more conventional Supercar, at 1480kg.

Overall, while the balance of the STARD Fiesta ERX feels quite different – and in some places a little more nervous compared to regular Supercars around Lydden – it is very impressive, and very quick too.

It’s hard to gauge the actual speed without a datum like gearchanges, but that evening I sit down to watch the on-board recordings. With no timing at the test, I time with my phone’s stopwatch. 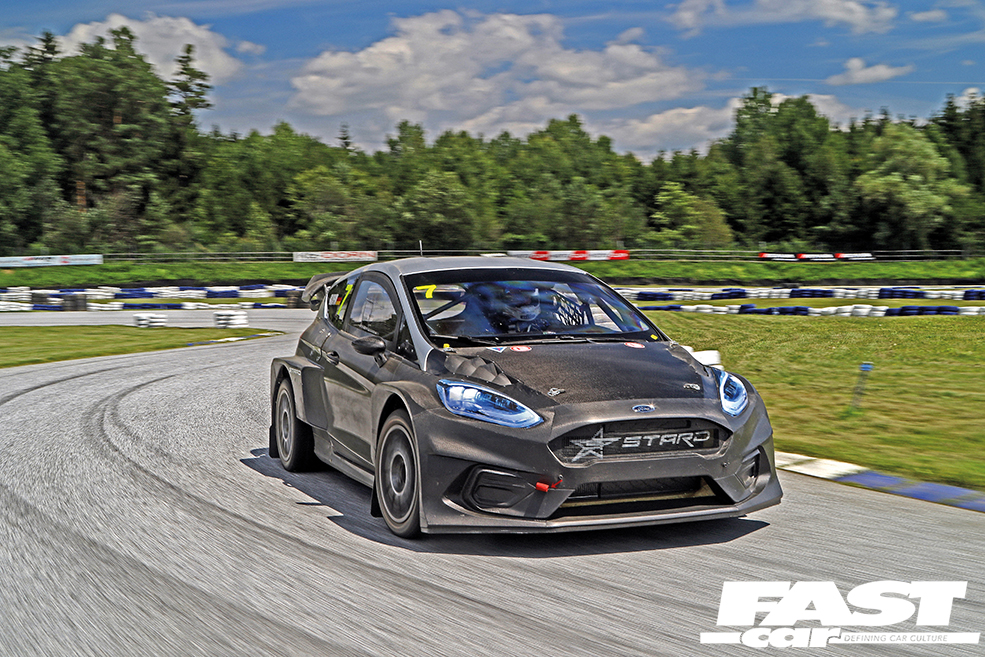 When racing Team RX Racing’s Ford Focus, a very good British RX car, in the final round of the British Championship last year at Lydden, on good tyres in the final, I set my best lap time of 44.759s.

For motorsport fans, that’s exciting news – meaning that the future of racing isn’t going to be any less fast-paced, or less exciting.

But perhaps the biggest excitement can be gleaned for fast-road cars and their enthusiastic drivers. When this technology undoubtedly filters its way down to production level – and with high-profile electric cars like the STARD Fiesta ERX, the Mustang Cobra Jet 1400, and Vaughn Gittin Jr’s crazy Mustang Mach-E 1400 acting as halo cars for electric power, it surely will – we’re going to be able to enjoy a whole new breed of fast Ford.