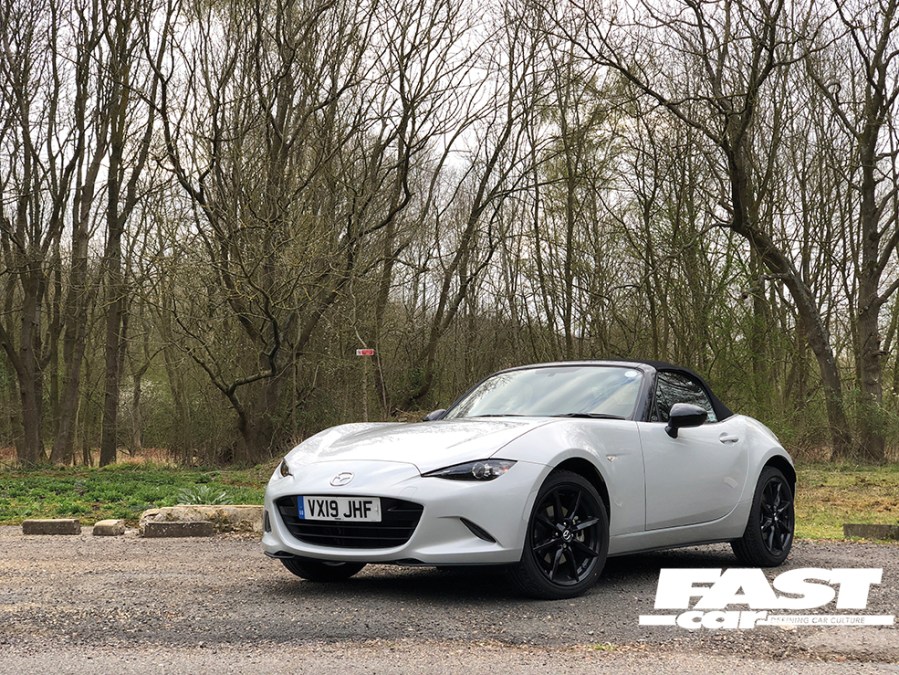 It’s the bread and butter recipe for fun; lightweight, cheap, rear-wheel drive and a punchy engine up front. Despite being 30 years old – it hasn’t grown up in any way, shape or form. Here’s our review of the Mazda MX-5 Mk4.

Ask someone to name a two-seater roadster to have fun in, and I can almost guarantee that the first response will be the Mazda MX-5. Why wouldn’t it be? For 30 years it’s dominated the roadster market. It took a recipe that harked back to the fifties and sixties with British classics and added Japanese reliability, but crucially, also brought the element of fun back to driving.

To have fun you don’t need 600bhp, 300mm-wide rear tyres and a whopping great turbo for plenty of whoosh pssssst. OK, that does help, but not everyone has a £50k budget to build a monster. Sometimes all you need is skinny tyres, a traction control switch that’s set to off, three pedals and a healthy amount of opposite lock. And this is where the MX-5 has always placed itself. 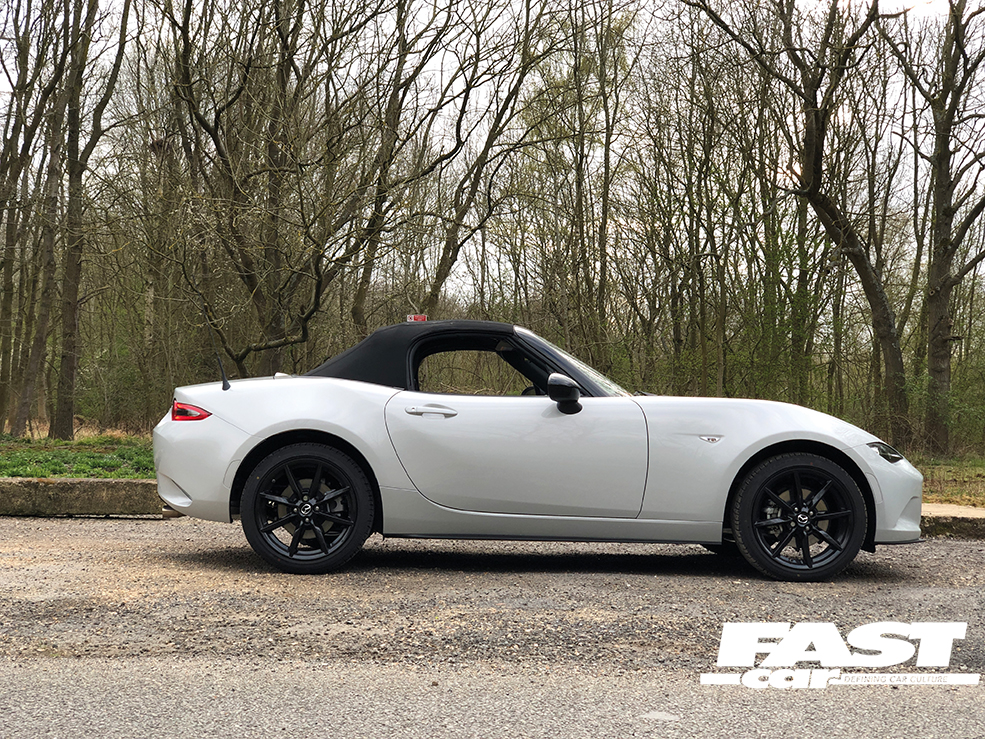 The latest iteration, the Mazda MX-5 Mk4, is a return to form. While some criticised the slightly more grown-up Mk3, the Mk4 brings back the simplicity of driving in a very attractive, yet more complex package. The car we’re testing here is the SE-L Nav+ trim with a 2.0-litre SKYACTIV-G engine producing around 180bhp. This happens to be the cheapest way into the top performance offering, losing out on some of the gadgets; a dream spec then.

Inside you still get a wealth of tech, some useful, sat-nav and a decent audio system, along with some not so useful bits. The button on the steering wheel that relates to voice control springs to mind here, as I must have accidentally pressed it at least 10 times when manoeuvring around car parks. The best thing of all though, is the heated seats; quite frankly if I have a convertible, I want to drive with the roof down as often as possible. Living in the UK means that if you do drive around with the roof off for most of the year you’ll freeze your knackers off, I’m simply not that hardcore. Put simply, switch the seats to warm and push the roof down, and you don’t have to worry. 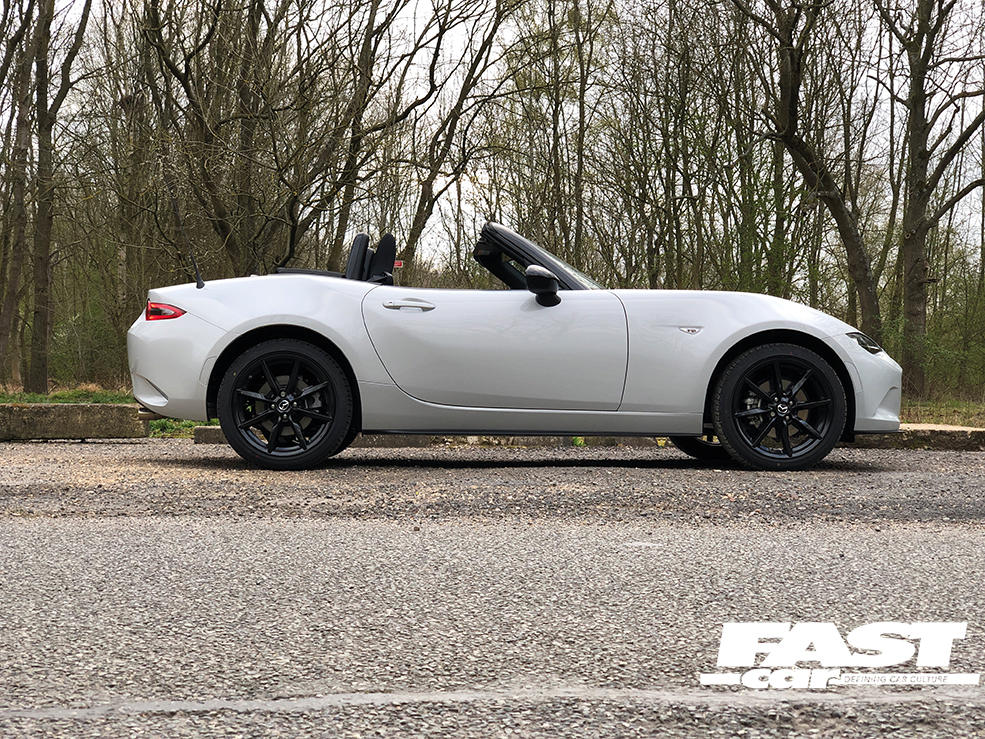 Speaking of the roof, Mazda hasn’t moved away from its roots. To pull the roof down you have two simple clips and a push back from the middle – the same as it has been for the past 30 years. You can get the robotic roof on the RF variant, but the proportions are odd in my opinion, I still prefer the look of the fabric roof – both up and down. And that’s important.

It’s a comfy place to be this Mk4 (or ND variant). Gone are the days of cheap Japanese interiors; inside is an up-to-date infotainment system with an i-drive-like rotary controller in the centre and a part-touchscreen 7-inch display positioned centrally for system settings, the sat-nav and the like. The cabin is a snug place to sit, you do genuinely feel less cocooned the older the MX-5 gets. At the Banzai office we have both Mk1 and Mk2 examples knocking around, both of which are roomier inside. The increased safety over the last 30 years is very much welcomed though, I’m happy to compromise on interior space for that.

As I’ve mentioned previously, we’re far too hung up on power figures, especially in the modified scene. By and large we tend to forget the actual driving pleasures that we all love deep down in the chase of who’s got the biggest schlong when it comes to sheer grunt. Again, excuse the saying. It shouldn’t be about out and out power, but how the car transpires through you. The MX-5 has a way of connecting with you that most sports cars struggle to do. It doesn’t try to hide what it is; it’s a plucky sub-200bhp open-top thrill machine that puts the likes of the R35 GT-R to bed for sheer driving pleasure. That’s a big statement, and I’m happy to stand on testimony to argue that. 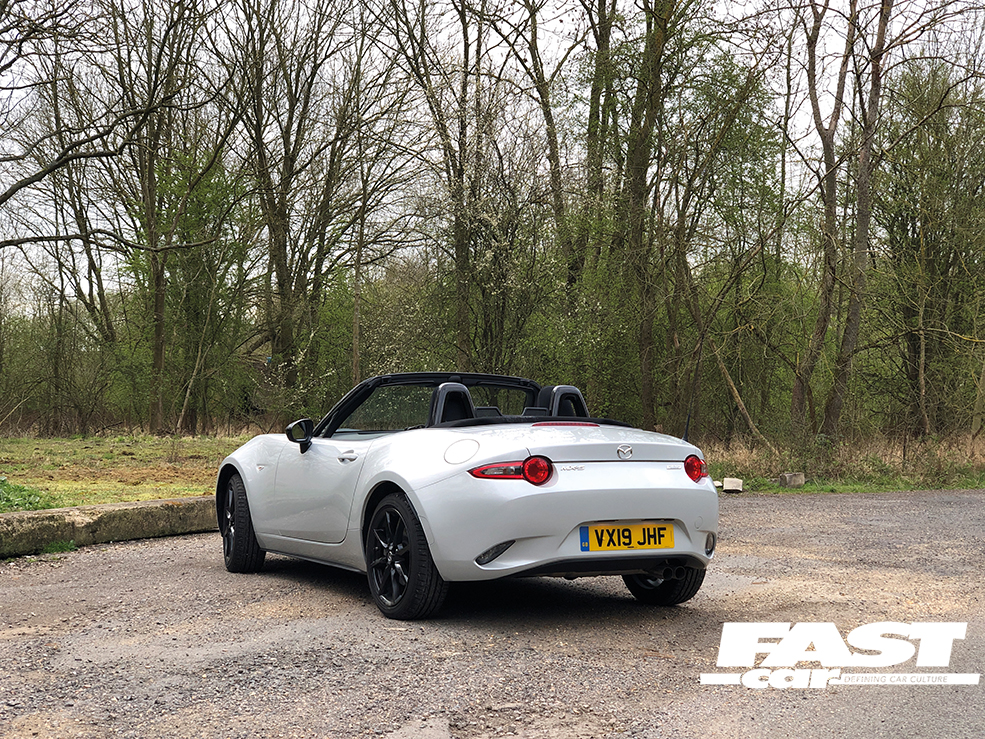 Let me run through what I mean. Pin the throttle from a dig and the little Mazda hooks up and bolts off. 0-62mph is now around the mid six second range, which isn’t slow whichever way you look at it. The gearbox has a lovely short throw, which means you can hammer home gear changes like its going out of fashion (and it is if you look at how many cars have automatic or dual-clutch boxes now).

This SKYACTIV engine is a strong one, producing a healthy 151lb ft of torque at 4000 rpm. The 180bhp(ish) comes on song at a whopping 7,000rpm, so you can really rev this little motor out. The tone pushes you to do so too. Don’t get me wrong, this is no ear-bursting rotary or screaming K20, but in today’s turbocharging world, it’s a welcomed mechanical sound that lets you know where the power is through tone alone. 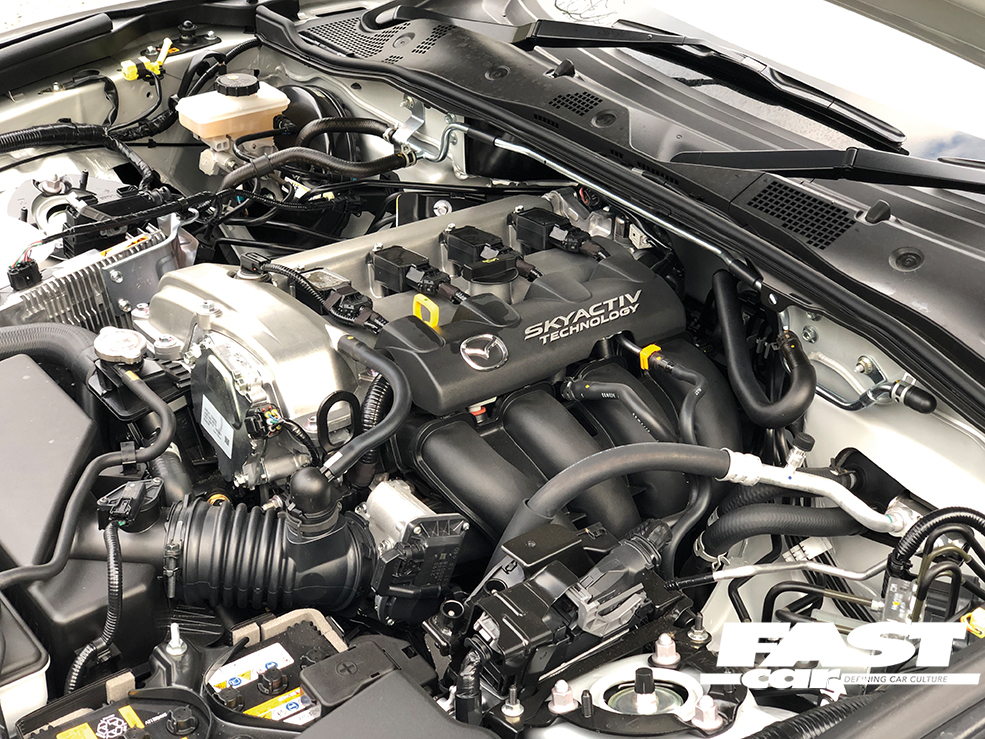 Thankfully, strapped between the rear wheels is a limited-slip differential, which means if you so happen to have the opportunity to find some light sideways action, or happen to be accidentally travelling in the wrong direction and need to do a quick 180, you can do so with full look and plenty of throttle. It’s actually a very easy car to control once you’re happy with how precise and direct the steering is.

Find a b-road and you’ll explore what these cars are all about. The handling is sublime, the change of direction from the front end is remarkable, and that’s all down to the fact that the car weighs so little. The suspension leans on the side of comfort of course, which can feel fairly soft when pressing on, but there’s no denying it suits the car when it comes to commuting. 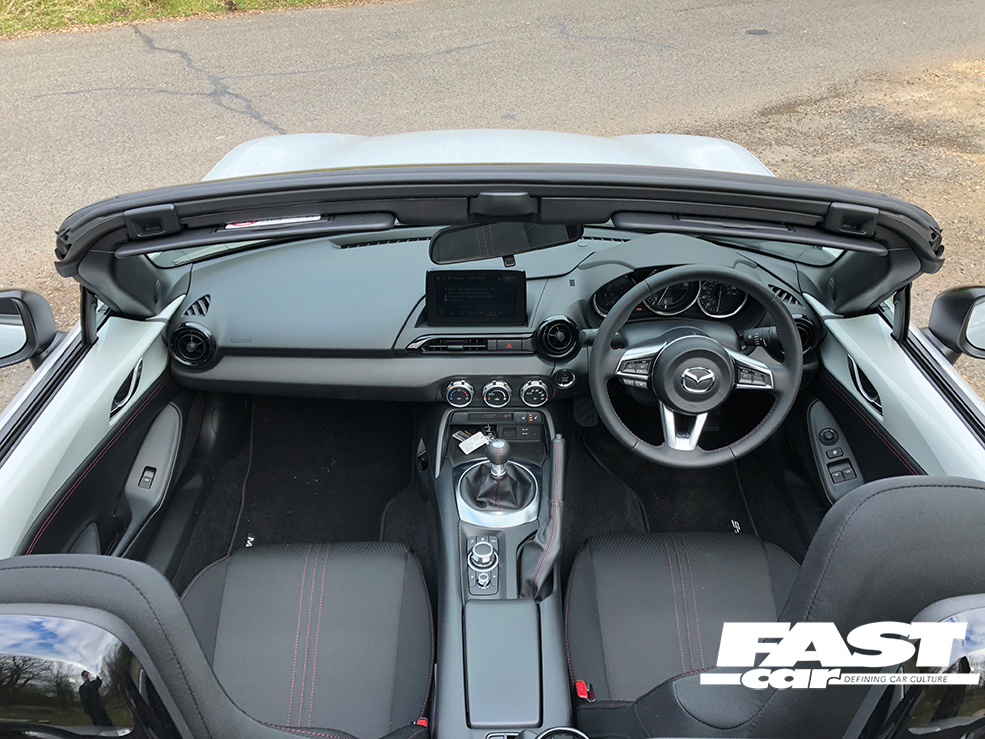 When it comes to summertime, or wintertime, open-top thrills, you just can’t beat the MX-5. In this latest iteration, it’s built upon the foundations without losing focus on the important part – the driving!

Prices ranges from £20,000 upwards depending on which trim level you go for. You can go for the lesser-powered 134bhp option, which features similar levels of fun, but you do notice the lack of power, so I have to say that I’d opt for the 2.0-litre.

Its ability to charm is remarkable, it never fails to put a smile on your face and when the weather is right, there’s something harmonious about it. With summer in full flow, I can’t think of a better car. 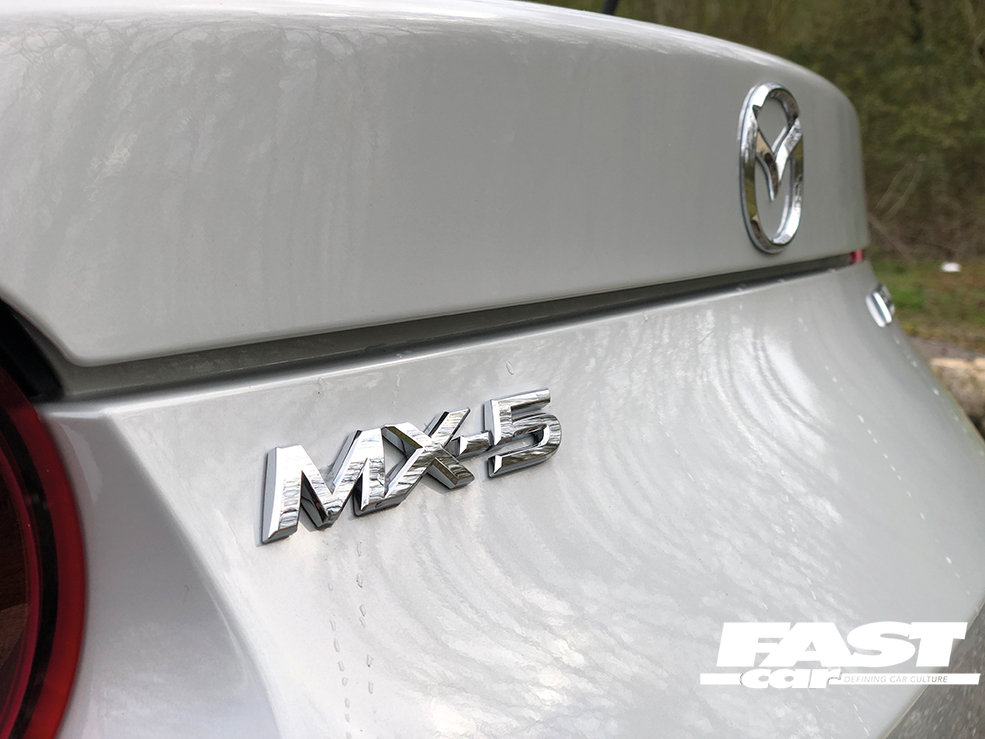